"The Twenty-One Nails: A Dzogchen Text from the Oral Transmission of Zhang Zhung (rdzogs pa chen po zhang zhung snyan rgyud las gzer bu gnyis shu rtsa gcig) Translated by Tenzin Wangyal Rinpoche and Kurt Keutzer...... From: History and doctrine of Bon-po Nispanna-yoga : original Tibetan texts on the transmission, teaching, rites, and deities of the Rdzogs chen Zhan Zhun school of the Bon-po’s, Collected by Tenzin Namdak and Lokesh Chandra, Sata-pitaka series; Volume 73, International Academy of Indian Culture, New Delhi 1968, pages 503-519. of that text. A commentary on the Twenty-One Nails that was used in this translation follows on pages 521-582 of that volume.".... 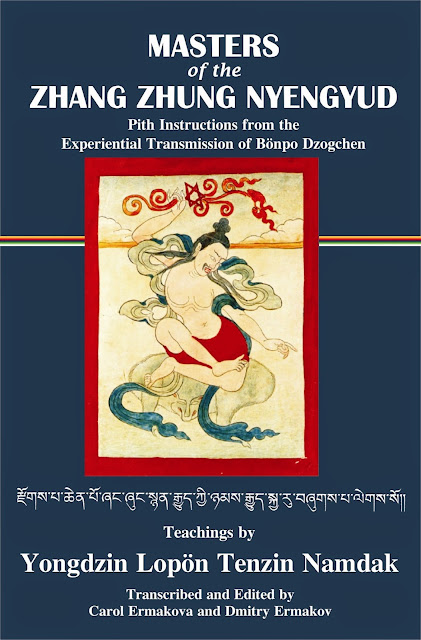 "In the thirteenth century, the illustrious Bonpo master Druchen Gyalwa Yungdrung composed a practice manual for this tradition. Book One deals with the preliminary practices of this Dzogchen system and the translation of this text was published earlier. Included in the present volume are the translations from Book Two that principally deal with the practices of contemplation and vision, otherwise known as Trekchod and Thodgal, as well as translations from Book Three of the four supplementary texts dealing with the view, meditation, conduct, and fruit of Dzogchen. Also included in this volume is a translation of the instructions for making the 49 day dark retreat according to the Zhang Zhung tradition, the text known as the Sevenfold Cycle of the Clear Light.".....http://vajranatha.com/excerpts/dzogchen-in-zhang-zhung.html

"The rider—the mind of innate awareness— Is mounted on the horse of mindfulness. Propelled by the wings of the unimpeded wind, It moves through the path of the bodhichitta central channel And arrives at the secret door of bliss at the crown. —from the twenty-one nails, dzogchen teachings from the zhang zhung nyen gyü.".... from TIBETAN YOGAS OF BODY, SPEECH, AND MIND by Tenzin Wangyal Rinpoche

"The Oral Transmission of Zhang Zhung is one of the three principal systems in the Bon tradition for the transmission of dzogchen or "great perfection" teachings....... The Transmission of Precepts consists of precepts, principally the Twenty-one Nails and the Six Lamps, that form the canonical teachings of the Zhang Zhung Oral tradition. The Experiential Transmission consists of detailed instructions on how to actually practice the tradition...What is most striking about Dru Gyalwa’s practice manual is its directness and clarity. The text is written as a detailed instructor’s guide for teachers in the tradition to teach their students. While the text is filled with beautiful and expansive quotes from the Twenty-one Nails and Six Lamps, the focus of the text is precise instruction on Dzogchen practice expressed in clear and direct language..".......http://rywiki.tsadra.org/index.php/The_Oral_Tradition_of_Zhang_Zhung

Dzogchen Teachings from The Oral Tradition of Zhang Zhung: The Twenty-One Nails and The Twenty-Four Masters....http://ligminchastore.org/practice/dzogchen-teachings-from-the-oral-tradition-of-zhang-zhung.html 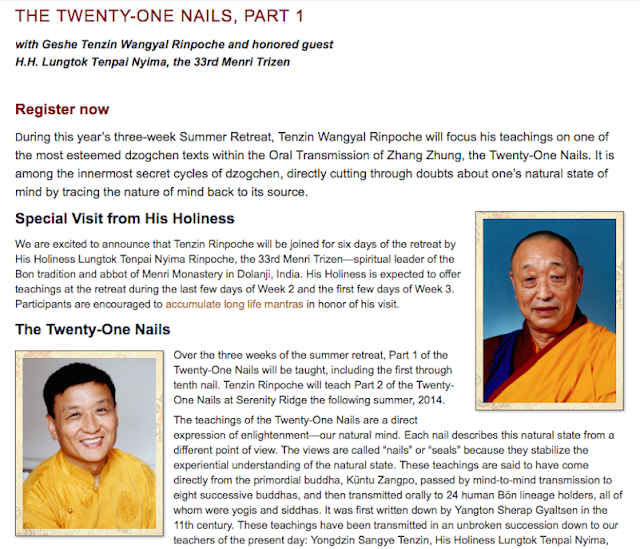