The Divine Triad of Syrian Gods: Ba'alshamin, Aglibol, and Malakbel 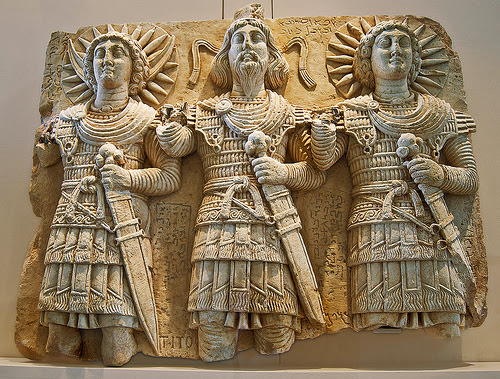 "This religious sculpture was discovered at Bir Wereb, near Palmyra. Situated on a major caravan route, Palmyra was at the crossroads of Syria, Mesopotamia, and the desert crossings. In its pantheon, external gods mingled with native deities. It was in this context that the triad of Ba'alshamin, Aglibol, and Malakbel developed during the first half of the first century AD. These gods are represented here in Roman military dress, a distinctive feature of Palmyrene religious iconography." 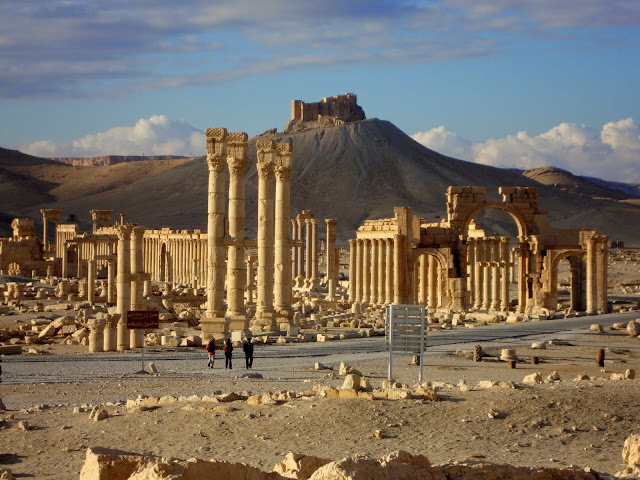 "Site of Palmyra....An oasis in the Syrian desert, north-east of Damascus, Palmyra contains the monumental ruins of a great city that was one of the most important cultural centres of the ancient world. From the 1st to the 2nd century, the art and architecture of Palmyra, standing at the crossroads of several civilizations, married Graeco-Roman techniques with local traditions and Persian influences.".....http://whc.unesco.org/en/list/23

"Palmyrans bore Aramaic names,and worshipped a variety of deities from Mesopotamia (Marduk and Ruda), Syria (Hadad, Baʿal, Astarte), Arabia (Allāt) and Greece (Athena). Palmyrans were originally speakers of western Aramaic, a language of the same group as Nabataean and the Aramaic spoken in Egypt, but later shifted to the Greek language.There had been a temple at Palmyra for 2000 years before the Romans ever saw it."

"This cosmic triad formed the upper part of a religious relief sculpture. The three standing gods wear tight-sleeved tunics and are depicted in military garb: lamellar cuirasses and Roman cloaks fastened at the right shoulder with fibulae. They grasp the hilts of their swords with their left hands, while their right hands, now missing, probably gripped spears or scepters. The long, flowing hair of the central god is adorned with a calathos and a ribbon, in the Parthian style; he also wears Persian trousers. His beard indicates that he is Ba'alshamin, as opposed to Bel. He is flanked by two gods: beardless, bare-legged, with curly hair, their heads are are surrounded by radiant haloes. These are the lunar god Aglibol, on the left, identifiable by his lunar crescent, and the sun god Malakbel, on the right. The lunar god's placement at the right hand of the supreme god indicates his superiority to the sun god, confirming Ba'alshamin's identity, and confers a hieratic dimension on the triad. 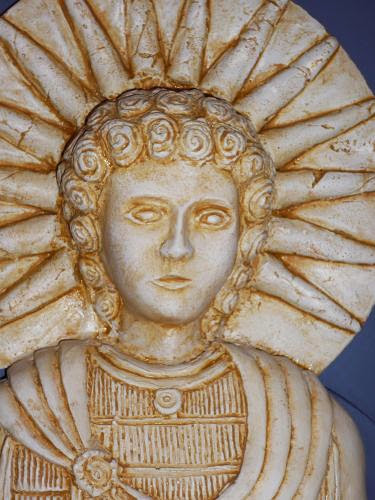 "This stone relief has particular interest in that the faces of the gods have been preserved intact, making the sculpture quite rare, since few depictions of the triad have come down to us. It was discovered near Palmyra, where Ba'alshamin's temple was second in importance only to the temple of Bel. Aglibol and Malakbel, gods of the traditional pantheon, had a common temple there. The triad was thus formed through the association of two old gods of the Palmyrene religion with the supreme god. The triads of Bel, who is depicted with the solar god Yarhibol and Aglibol, and of Ba'alshamin-Aglibol-Malakbel are the only ones known to have existed at that time. This sculpture is the most significant and oldest known depiction of the triad of Ba'alshamin.

"In Syria a host of divinities was represented in military garb. This phenomenon was particularly noticeable in Palmyra. The lamellar cuirass was inspired by Oriental Hellenism. Its style predates the Roman muscle cuirass, which replaced the Hellenistic cuirass during the first century AD. Ba'alshamin's straight hair, which is a feature of old sculptures, the lunar crescent placed at the same level as the halo and not as yet at shoulder level, as well as the roundness of the bodies and the protuberant eyes, indicate that this sculpture can be dated back to the first half of the first century AD. This triad was the product of an official belief system, and its various sources of inspiration-Parthian, Hellenistic, and Roman-exemplify vividly the original and hybrid art of Palmyra.

"Palmyra.....was an ancient city in central Syria. In antiquity, it was an important city located in an oasis 215 km northeast of Damascus and 180 km southwest of the Euphrates at Deir ez-Zor. It had long been a vital caravan stop for travellers crossing the Syrian desert and was known as the Bride of the Desert.....Palmyrans bore Aramaic names, and worshipped a variety of deities from Mesopotamia (Marduk and Ruda),Syria (Hadad, Baʿal, Astarte), Arabia (Allāt) and Greece (Athena).Palmyrans were originally speakers of Aramaic but later shifted to the Greek language......In the mid 1st century AD, Palmyra, a wealthy and elegant city located along the caravan routes linking Persia with the Mediterranean ports of Roman Syria and Phoenicia, came under Roman control. A period of great prosperity followed......he most striking building in Palmyra is the huge temple of Ba'al, considered "the most important religious building of the first century AD in the Middle East". It originated as a Hellenistic temple, of which only fragments of stones survive. The central shrine (cella) was added in the early 1st century AD.".....http://en.wikipedia.org/wiki/Palmyra 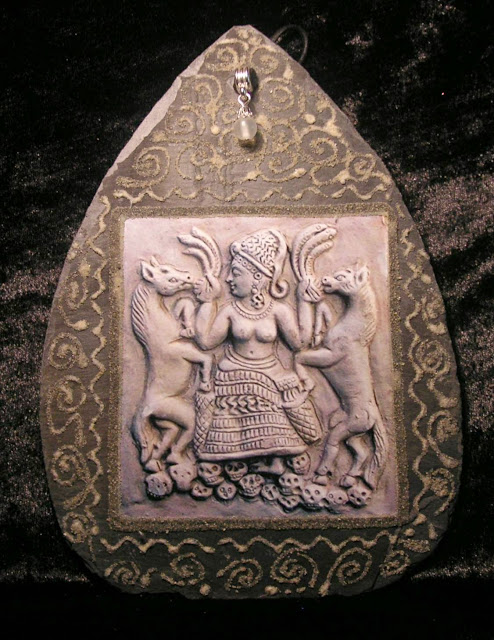 Astarte......also spelled Athtart or Ashtart, great goddess of the ancient Middle East and chief deity of Tyre, Sidon, and Elat, important Mediterranean seaports. Hebrew scholars now feel that the goddess Ashtoreth mentioned so often in the Bible is a deliberate conflation of the Greek name Astarte and the Hebrew word boshet, “shame,” indicating the Hebrews’ contempt for her cult. Ashtaroth, the plural form of the goddess’s name in Hebrew, became a general term denoting goddesses and paganism......King Solomon, married to foreign wives, “followed Astarte the goddess of the Sidonians” (1 Kings 11:5). Later the cult places to Ashtoreth were destroyed by Josiah. Astarte/Ashtoreth is the Queen of Heaven to whom the Canaanites burned offerings and poured libations (Jeremiah 44).....Astarte, goddess of war and sexual love, shared so many qualities with her sister, Anath, that they may originally have been seen as a single deity. Their names together are the basis for the Aramaic goddess Atargatis.......Astarte was worshiped in Egypt and Ugarit and among the Hittites, as well as in Canaan. Her Akkadian counterpart was Ishtar. Later she became assimilated with the Egyptian deities Isis and Hathor (a goddess of the sky and of women), and in the Greco-Roman world with Aphrodite, Artemis, and Juno.".....http://www.britannica.com/EBchecked/topic/39661/Astarte