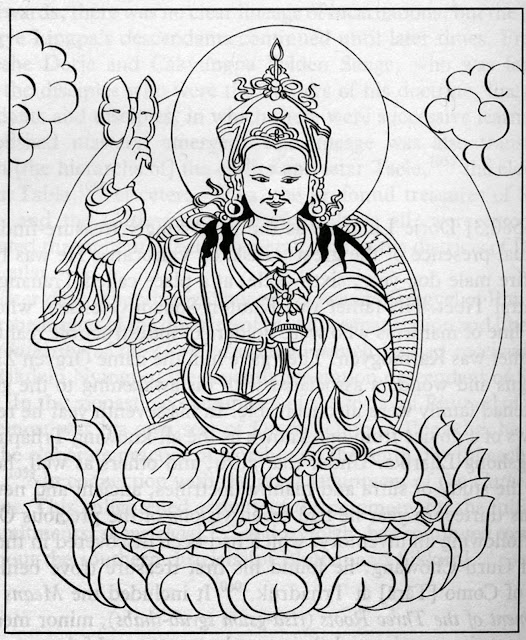 "Dorje Lingpa is considered as one of the five great “treasure revealers” (tertön) among the Nyingmapa and an important Dzogchen master by the Bonpo tradition. He was thus an exceptional figure who clearly adopted an impartial approach to both Buddhist practices and the Bon, the non-Buddhist religious tradition in Tibet, in his spiritual quest. His approach therefore made him the precursor of what is later known as the “eclectic” (rime) movement of the nineteenth century (Smith 1970)."......http://www.bhutanstudies.org.bt/pubFiles/1.gold_needle.pdf

"Dorje Lingpa (Wyl. rdo rje gling pa) (1346-1405), the third of the five sovereign terma revealers..... In his fifteenth year in a cave at the Ökar rock, when Guru Padmasambhava came to him in person and granted him empowerment, he revealed many termas.".... http://www.rigpawiki.org/index.php?title=Dorje_Lingpa

"After some years of intensive study (he had three primary teachers and eleven secondary instructors), he went into solitary retreat for one year and ten days. At sometime during this retreat he experienced himself as actually one with the Vajra Logos (Vajrasattva), and also received visions of divine archetypes such as Vajrakilaya, or of innumerable Indian and Tibetan saints such as Padmasambhava, Vimalamitra, Yeshe Tsogyal, Nyima Ozer and Kunkhyen Chos-je. In these visions he was bestowed pronouncements where he would find hidden treasure texts, objects and special revelations in the future. Consequently he was to reveal the text Rig-'dzin Thug-tig at Yama Lung, the text gShin-rje-gshed gregs-'joms at Shel Drag, the cycle of Thugs-rje chen-po bde-gshegs kun-'dus, and most importantly of all, his greatest revelation, the rDor-sems-ati-'skor at Okar Rock when he was 33 years of age."....http://www.dharmafellowship.org

"Dorje Lingpa (rdo rje gling pa)was born in 1346.....In 1376 Dorje Lingpa returned to Tibet. Stories are told of the welcome he received in Tibet, following his sojourn in the reputedly barbaric regions of the south. For example, when visiting Barawa Gyeltsen Pelzang ('ba' ra ba rgyal mtshan dpal bzang) in the Shang valley, he was asked to please dress the part of a respectable lama, for fear that the clerics who were gathering to welcome him would loose faith. Dorje Lingpa arrived in a procession with women in tiger and leopard masks, and proceeded to sing a song of realization the topic of which was the tantric erasure of conventional dualistic thinking."......http://www.treasuryoflives.org/biographies/view/Dorje-Lingpa/8750

"Dorje Lingpa considered himself an incarnation of Vairocana, the eighth century Tibetan adept who is considered to have concealed both Buddhist and Bon treasures and figures prominently in the Dzogchen lineage of both traditions....Dorje Lingpa originated the practice known as “public revelation” (khrom gter), in which an audience is invited to witness the extraction of the treasure object. In 1371, with three hundred people in attendance, he revealed treasure at Orgyen Yiblung Dekyiling (O rgyan yib lung bde skyi gling), and again at Pungtang (spungs thang)."....http://www.treasuryoflives.org/biographies/view/Dorje-Lingpa/8750

"Vairocanarakshita (or Vairocana), the Tibetan-born monk and translator active in the late eighth century...Samye, the first monastery of Tibet was built in 747. The first Lama was Pal-bans, who succeeded Santa-rakshita, and the first ordained monk was ByaKri-Gzigs. The most brilliant follower was Vairocana, who translated many Sanscrit works into Tibetan..".....http://www.treasuryoflives.org/biographies/view/Vairocanavajra/13066

"At 15, he disclosed a large number of manuscripts at Namchagdrag amongst which he found the text Tawa Longyang. It became the basis of his Dzogchen teachings in later life. In this work he held some radical views on the main Dzogchen theories that aroused a good deal of interest amongst his followers as well as eliciting severe criticisms from the Gelugpa dialecticians (Karmay 1988: 186)." ......http://www.rangjung.com/authors/Dorje_Lingpa.htm

"In 1362 he became known as Dorje Lingpa at the age of 17, and is said to have revealed more manuscripts in four volumes that contained texts on such subjects as medicine, the Bon religion, astrology and the do rituals, [but these have subsequently been lost over time]. He continued to engage in similar ventures in various places before he made his first visit to Bhutan. His rediscovery of hidden manuscripts of texts were so numerous that Sogdogpa Lodro Gyaltshen describes them as "the mad treasures"(ternyon)"......http://www.rangjung.com/authors/Dorje_Lingpa.htm

An extensive biography of Dorje Lingpa exists in English has been published by scholar Samten Karmay in his article, "Dorje Lingpa and His Rediscovery of the "Gold Needle" in Bhutan:" (Bhutan Studies Journal Volume 2 No. 2, 2000)...... .....vajrayana.faithweb.com/Dorje%...may.pdf

"At fifteen, he disclosed a large number of treasures at Namchagdrak (gnam lcags brag). Among these was the Tawa Longyang (lta ba klong yangs), a father tantra Dzogchen cycle is considered one of his more controversial and innovative teachings. Also included were the Lama Kadu (bla ma bka' 'dus) and the Yidam Kadu (yi dam bka' 'dus). These flourished in Kongpo and Kham, but ultimately died out, before being revived in the nineteenth century by Jamyang Khyentse Wangpo ('jam dbyang mkhyen brtse'i dbang po, 1813-1892)."..http://www.treasuryoflives.org/biographies/view/Dorje-Lingpa/8750

"In 1369 aged 24, Dorje Lingpa was staying in the hermitage of Chuwori in Yarto, Central Tibet. In this place he claimed to have obtained a "guide" to the "concealed manuscripts" by Vairocana. In a dream a monk gave him a flat bell (shang) and a thunderbolt (dorje) pointing with his finger toward the south and said "O! your wealth portion (norkal) and your would-be converts are down there, that way!".....Vairocana was an eighth century Tibetan Buddhist monk believed to have practised Buddhism and Bon, the flat bell being a symbol of the Bon religion and vajra that of tantric Buddhism. Dorje Lingpa believed himself to be an embodiment of the monk and took the dream as an indication for finding hidden manuscripts in Tagtshang Sengge Samdrub in Paro. He therefore set out on a pilgrimage with the hope of divulging hidden manuscripts.".....http://www.rangjung.com/authors/Dorje_Lingpa.htm

"he seemed to have formed a habit of writing down as soon as the daybreak began what he could remember of religious instructions and prophecies that he believed to have received from the sages in his dreams during the night.....known as gur, "mystical utterance", a connotation of the term that developed later in the Tibetan religious tradition. .".....

"Dorje Lingpa never settled himself in one place. He travelled around incessantly carried away by the motivation of disclosing hidden manuscripts and it was mainly because of this urge in him that he travelled to Bhutan, then known as Mönyul or Lhomön (Cf. Pommaret 1999), where he flourished particularly."....http://www.bhutanstudies.org.bt/pubFiles/1.gold_needle.pdf

"In 1362 aged 17, he became known as Dorje Lingpa for the first time and is said to have revealed more manuscripts in four volumes that contained texts on such subjects as medicine, the Bon religion, astrology and the dö rituals,2 but these have not found their way into the collected writings......Vairocana was an eighth century Tibetan Buddhist monk believed to have practised Buddhism and Bon, the flat bell being a symbol of the Bon religion and vajra that of tantric Buddhism. Dorje Lingpa believed himself to be an embodiment of the monk....Kubum, the Bonpo Establishment in Bhutan in the Fourteenth Century Kubum was the place where Dorje Lingpa spent some time when he was in Bhutan. As I mentioned above, one of the principal reasons for visiting Paro was to reveal some hidden manuscripts in one of the caves of Tagtshang. The “Gold Needle”30 is the main work of the manuscript collection. It contains a remarkably original exposition of the Dzogchen doctrine, which he claims to be in accordance with the Bon tradition. In the colophon of this work he signed with the name Bonzhig Lingpa".....http://www.bhutanstudies.org.bt/pubFiles/1.gold_needle.pdf