"Cyrus The Great (Cyrus II, Kourosh in Persian, Kouros in Greek)..... (580-529 BC) was the first Achaemenid Emperor. He founded Persia by uniting the two original Iranian Tribes- the Medes and the Persians....The name "Cyrus" (a transliteration of the Greek Kυρoς) is the Greek version of the Old-Persian kûruš or Khûrvaš meaning "sun-like": the noun khûr denotes "sun" and -vaš is a suffix of likeness. In the Cyrus cylinder (see below), the great king declares his ancestry as a Persian king."..... http://www.cyrusthegreat.net 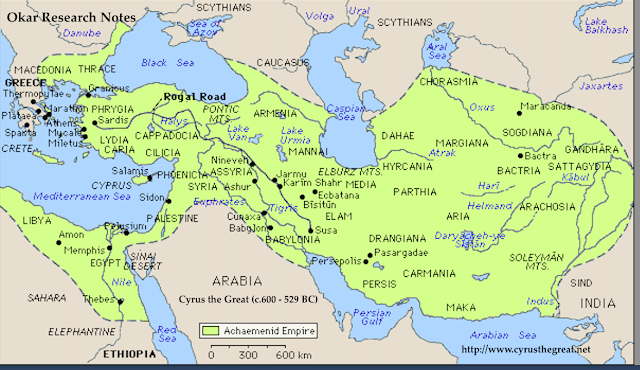 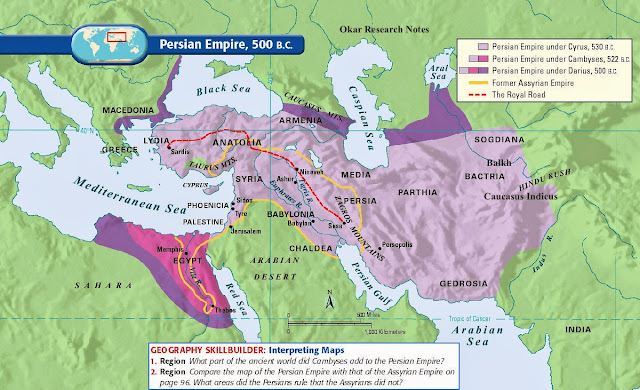 "The conquest of Asia Minor completed, he conquered Hyrcania and Parthia....Drangiana, Arachosia, Margiana and Bactria. After crossing the Oxus, he reached the Jaxartes, where he built fortified towns with the object of defending the farthest frontier of his kingdom against nomadic tribes of Central Asia....When he conquered Egypt and Babylon, he did so to cheers from the Jewish Community, who welcomed him as a liberator- he allowed the Jews to return to the promised Land. He showed great forbearance and respect towards the religious beliefs and cultural traditions of other races. These qualities earned him the respect and homage of all the people over whom he ruled."...http://www.iranchamber.com/history/cyrus/cyrus.php

"Prior to his death, he founded a new capital city at Pasargade in Fars. and had established a government for his Empire. He appointed a governor (satrap) to represent him in each province, however the administration, legistlation, and cultural activities of each province was the responsibility of the Satraps.".....http://www.iranchamber.com/history/cyrus/cyrus.php 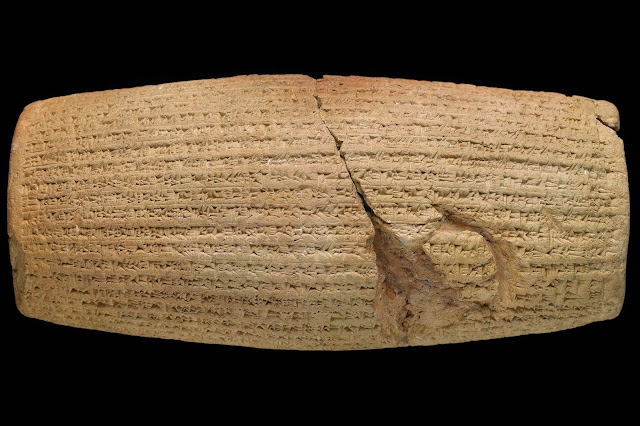 "The Cyrus cylinder is a fragmentary clay cylinder with an Akkadian inscription of thirty-five lines discovered in a foundation deposit by A. H. Rassam during his excavations at the site of the Marduk temple in Babylon in 1879... It is inscribed in Akkadian cuneiform. Now housed in the British Museum, it includes a detailed account by Cyrus of his conquest of Babylon in 539BCE and his subsequent humane treatment of his conquered subjects. It has been hailed as the world's first declaration of human rights. The (incomplete) inscription on the cylinder starts by describing the criminal deeds of the Babylonian king Nabonidus; as well as how Marduk, the Babylonian god, had looked for a new king and chosen Cyrus. It continues with the famous: "I am Cyrus, king of the world, the great king, the powerful king, king of Babylon, king of Sumer and Akkad, king of the four quarters of the world""....http://www.cyrusthegreat.net

"Marduk was the Babylonian name of a late-generation god from ancient Mesopotamia and patron deity of the city of Babylon, who, when Babylon became the political center of the Euphrates valley in the time of Hammurabi (18th century BCE), started to slowly rise to the position of the head of the Babylonian pantheon, a position he fully acquired by the second half of the second millennium BCE. In the city of Babylon, he resided in the temple Esagila..... According to The Encyclopedia of Religion, the name Marduk was probably pronounced Marutuk. The etymology of the name Marduk is conjectured as derived from amar-Utu ("bull calf of the sun god Utu"). The origin of Marduk's name may reflect an earlier genealogy, or have had cultural ties to the ancient city of Sippar (whose god was Utu, the sun god), dating back to the third millennium BCE."..... Helmer Ringgren, (1974) Religions of The Ancient Near East

"Traditional maps of Olmo lung ring show resemblance to the Persian empire of Cyrus the Great. Names of places and palaces are transcriptions of words of Persian origin. Hetenyi and Kuznetsov of the Soviet Union have done research in this area."..(Karmay: 1975..pg 175)...

"Siddhartha Gautama, in India, was a contemporary of Cyrus the Great, in the Middle East:Siddhartha... was born about 563 BC, in a small kingdom, that would become the country of Nepal. His family, the Gautamas, ruled the kingdom. Siddhartha's father was King Shuddodana, and his mother was Queen Maya. .... about the same time that Cyrus the Great liberated Babylon, and freed the Jews, Prince Siddhartha founded the Buddhist religion, as a reaction against the oppression of the masses...... the "religious revival", brought about by Shah Cyrus the Great, in the Middle East, closely coincides, with the beginnings of Buddhism, in India.".. M.Woods & M.B.Woods. Seven Wonders of Ancient Asia, pp. 18-21.

"The time of the Buddha Gautama's birth and death is uncertain: most historians in the early 20th century dated his lifetime as circa 563 BCE to 483 BCE......In The Kalachakra, along with King Suchandra, 96 Satraps and emissaries from Shambhala are also said to have received the Kalachakra teachings from the Buddha." 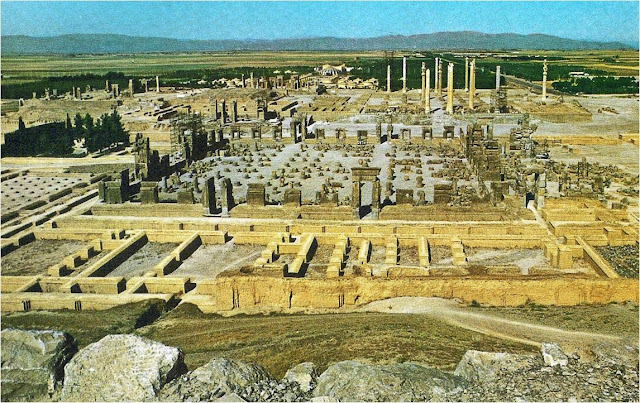 Pasargadae: one of the oldest residences of the Achaemenid kings, founded by Cyrus the Great (r.559-530)......the place is beautifully situated in the center of a fertile plain, on all sides surrounded by mountains.