Chöd: Cutting Through Attachments and Aversions

The word Chöd is usually translated as “cutting through”. Jamgon Kongtrul defined Chöd as “The Chöd that aims at cutting through demons.”.... In other words we deliberately evoke the objects of thoughts and emotions and use them on the path of meditation to “cut through” our attachments and aversions. As Chöd practitioners, we intentionally create situations for our demons to arise in order to practice cutting through attachments and aversions to both inner and outer objects, realizing the true nature of these phenomenon, Luminous/Emptiness, the Dharmakaya. Part of the unique genius of Chöd is that in the practice we harness our imaginations to skillfully offer our demons everything they desire, selflessly giving them our bodies and our egos with the intention to end their suffering. This compassionate approach to working with our demons has a positive psychological effect on us, allowing us to let go of old hurts, freeing trapped energies and experiencing greater freedom in our lives. In the practice we feed our ego to our demons and we become our demons, our emotional pain. This may seem counter-intuitive at first. Why would anybody want to go near something that psychologically painful? When we do this work, we let go of our sense of self as an individual “I”, and gain understanding. At this moment, as if by alchemy, our demon transforms into an ally and we experience liberation. We free our demon and free ourselves, blessing them and instructing them to do Bodhisattva activity throughout the six realms of existence. 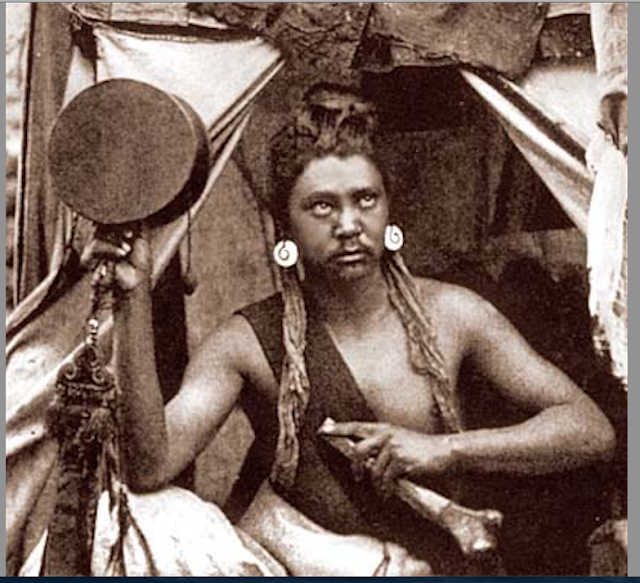 "The Kāpālika tradition was a non-Puranic, tantric form of Shaivism,whose members wrote the Bhairava Tantras, including the subdivision called the Kaula Tantras. These groups are generally known as Kāpālikas, the "skull-men," so called because, like the Lākula Pāsupata, they carried a skull-topped staff (khatvanga) and cranium begging bowl. Unlike the respectable Brahmin householder of the Shaiva Siddhanta, the Kāpālika ascetic imitated his ferocious deity, and covered himself in the ashes from the cremation ground, and propitated his gods with the impure substances of blood, meat, alcohol, and sexual fluids from intercourse unconstrained by caste restrictions. The Kāpālikas thus flaunted impurity rules and went against Vedic injunctions. The aim was power through evoking deities, especially goddesses."......Flood, Gavin. 2003. The Blackwell Companion to Hinduism. Malden: Blackwell. pg. 212 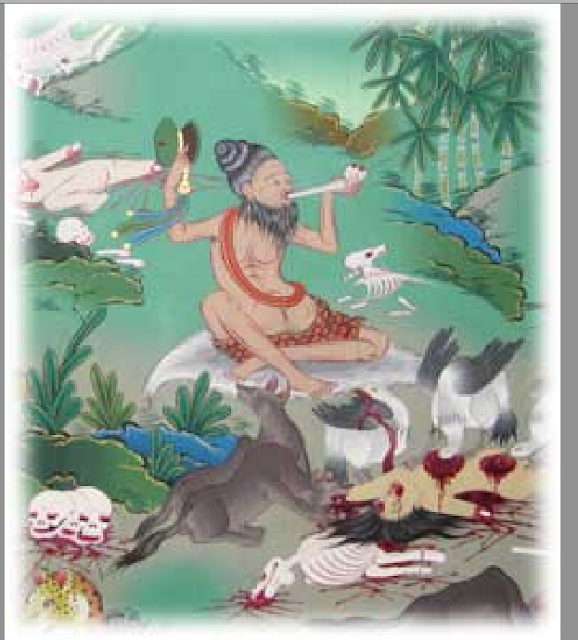 "Kāpālika (Skt., ‘skull-wearer’). A sect of Śaivism which flourished from the 7th to 14th cents. CE, also called the Somasiddhānta. The Kāpālikas were cremation-ground (śmaśāna) dwellers who covered themselves with the ashes of corpses and carried a skull which they used as a bowl. The terrifying form of Śiva as Bhairava, Mahākāla, or Kāpālabhṛt (‘skull-carrier’) was the central deity of the cult. Kāpālika practice aimed at a vision of, and possession (aveśa) by, a deity or power (śakti), in order to achieve perfection (siddhi). Practice included the consuming of corpse-flesh and scatalogical substances, meditation whilst seated on a corpse, sexual rites with low-caste women, and animal, human, and self-sacrifice. The Kāpālikas were scorned and feared by orthodox Brahmanism, and if a brahman saw one, he would stare into the sun to purify himself. The Kāpālikas were absorbed into the Nāthas and Aghorīs.".....The Concise Oxford Dictionary of World Religions (1997)...by JOHN BOWKER 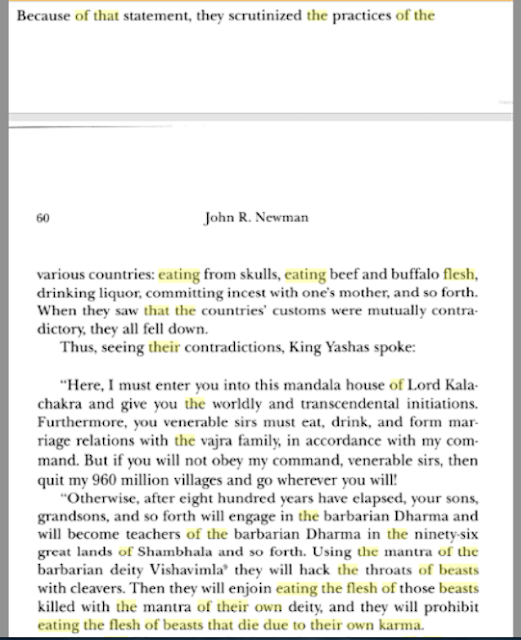 The Wheel of Time: The Kalachakra in Context......By Geshe Lhundub Sopa