KHYUNGPO NALJOR...(978-1127)... (khyung po rnal 'byor)......Jamgon Kongtrul the Great regarded him as the greatest master ever to have graced Tibet after Guru Padmasambhava and the 25 disciples, was born in a year of the Tiger in the southern part of Tibet, into a distinguished family, the clan of the Khyung, being the same extended family clan from which the lord of yogins Jetsun Milarepa hailed somewhat later. Thus, his own name meant "the Yogin of the Garuda clan." ......http://rywiki.tsadra.org 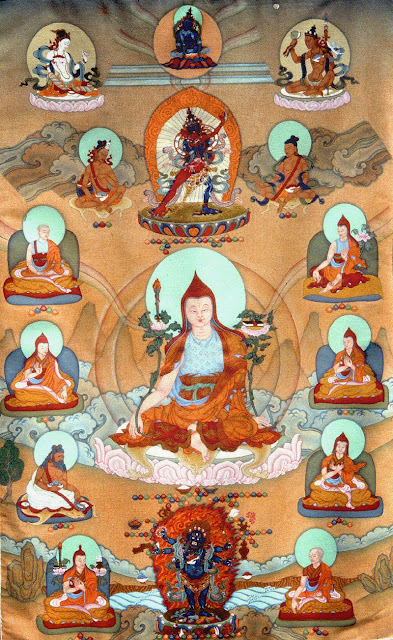 ..."In his work 'An Impartial History of the Sources of Spiritual Instruction', Jamgon Kongtrul had great praise for Khyungpo Naljor, who mastered both Ancient Tibetan lineages and had more than 150 teachers. He founded the Shangpa lineage."...(Jamgon Kongtrul's Retreat Manual..pg 87)...


"By the age of ten he excelled in reading, writing, arithmetic and both Chinese and Indian astrology. At twelve, in accordance with the tradition on his father's side of the family, he studied the Bon teachings. Later on he practiced Dzogchen, and finally Mahamudra.".....http://rywiki.tsadra.org/index.php/Khyungpo_Naljor

"The Blue Annals contains an interesting passage that suggests Khyungpo Neljor faced a certain amount of resistance to his teaching. Khyungpo Neljor accused “the monks” of focusing too much on books, and conjured apparitions of various peaceful and wrathful deities to propel them to practice. However, jealous monks took up arms and Khyungpo Neljor had to conjure phantom troops to defeat them. He then went on to subjugate numerous non-human entities who were obstructing his teaching."......Roerich, George, trans. 1996. The Blue Annals. 2nd ed. Delhi: Motilal Banarsidas, pp. 728-

"....the siddha khyung po rnal 'byor. He belonged to the khyungpo clan, and was born at snye mo ra mangs% in the Tiger year (stag lo 1086 A.D.) as son of father stag skye and mother bkra shis skyid. Soon after his birth, the Indian siddha Amogha came there, and uttered an auspicious prophecy about him. At the age of ten, he mastered reading, and the Indian and Tibetan alphabets. He became proficient in the Kalacakra. At the age of 13, he studied with the ācārya g.yung drung rgyal ba the Bon doctrine, and preached it to others, and about 700 scholars (possessing manuscripts of the text) attended his class." (R:728, Chapter 9)."...https://collab.itc.virginia.edu/wiki/renaissanceold/Bon%20in%20the%20Blue%20Annals.html

"Khyungpo Naljor, a twelfth-century teacher in Tibet, once had a visionary experience in which a lion-headed dakini appeared to him and sang this song about working with dakini energy. Translated by western buddhist teacher, author Ken McLeod......http://www.mahakalaradio.org/resources/prayers/the-dakini-song-of-khyungpo-naljor/..... 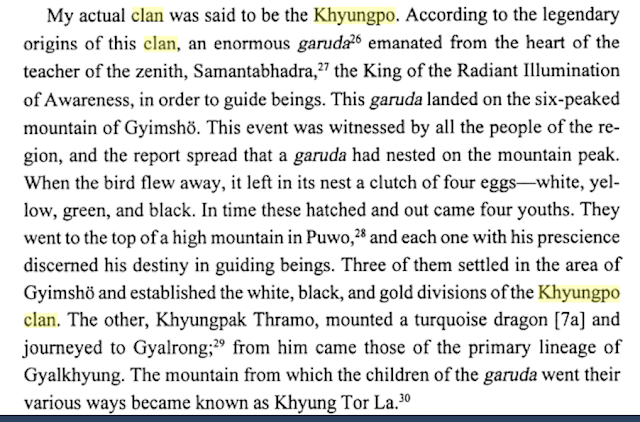 The Autobiography of Jamgon Kongtrul: A Gem of Many Colors

"According to the Blue Annals, Khyungpo Naljor asked his teachers whether anyone in India had met the Buddha Vajradhara, the source of the Buddhist tantras. They replied that Niguma, reputedly the sister of Naropa, had done so. Khyungpo Naljor sought her out, finding her in the Sosa charnal ground in East India. He requested her transmission, to which she replied "I am a flesh-eating dakini!" When he pressed her, she demanded gold. Taking his gold and throwing it into the forest, her retinue of dakini formed a mandala, bestowing on Khyungpo Naljor the initiation of the Illusory Body (sgyu lus) and Dream Yoga, two sections that make up the Nigu Chodrug (ni gu chos drug), or Six Yogas of Niguma. Niguma then transported him to a golden mountain summit where she bestowed the complete Six Yogas, the Dorje Tsikang (rdo rje tshig rkang) and the Gyuma Lamrim (sgyu ma lam rim). She prophesied that the teachings should stay secret until the seventh lineage holder, she being the second after Vajradhara.".....http://www.himalayanart.org

"Traditional sources attribute to Khyungpo Nenjor, the founder of the Shangpa Kagyü lineage, a lifespan of 150 years beginning in a tiger year, usually thought to be 978 or 990. A careful examination of the chronological indications given in his rnam thar, however, suggest that it is implausible to hold that Khyungpo Nenjor was born prior to the middle years of the eleventh century."......Chronological Conundrums in the Life of Khyung po rnal ’byor: Hagiography and Historical Time by Matthew T. Kapstein,