Way of Nangshen....Shen of the Visible World

"Nangshen, comprises various rituals for purification to summon energy and enhance prosperity, to suppress and liberate negative forces, and to invoke and make offerings to powerful deities and pay ransoms to demonic spirits." 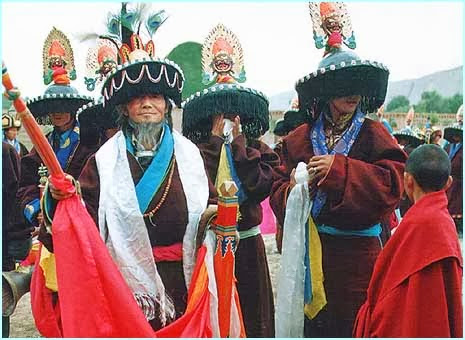 Raising Lungta......"There is a strong connection between the practice of soul retrieval and the popular lungta practice, which is performed to reinforce fortune and capacity, by ‘raising the wind-horse’. This is a very powerful rite, performed by large groups of Tibetans, on top of mountains on the first, or third day of the New Year. The participants arouse and invoke the mountain spirits by making smoke offerings, putting up prayer flags and throwing five-coloured cards bearing mantras into space in order to reinforce prana (vital air), which is the support of the la. In this way the la is also healed and reinforced, and consequently the participants’ capacity, fortune and prosperity increase, and whatever venture they undertake becomes successful.".....http://entheology.com/peoples/shamanism-in-the-native-bon-tradition-of-tibet/

"Nangshen practices are very widespread in Tibet. Families perform small ones, while large scale ones are usually performed collectively in towns, villages and monasteries. In ransom rites, an effigy is prepared which represents the beneficiary of the rite, or the shamanic practitioner who is performing it. I remember when my mother had been ill for a long time we tried to heal her by means of different medical treatments, but nothing helped. We then performed several minor rites, but these did not work either. So finally we invited some shaman monks, who performed a big ransom rite, in which they prepared a large effigy of her (in fact, people often make life-size effigies) and we dressed it in her clothes, so that it was very lifelike and resembled her closely. Then we performed the ritual, offering the effigy in her place to repay her karmic debt to spirits. She was given a new name, Yehe Lhamo, in place of her old name, Drolma, as a kind of new birth into the world, and she recovered from her illness."....Shamanism in the Native Bon Tradition of Tibet.....By Tenzin Wangyal Rinpoche 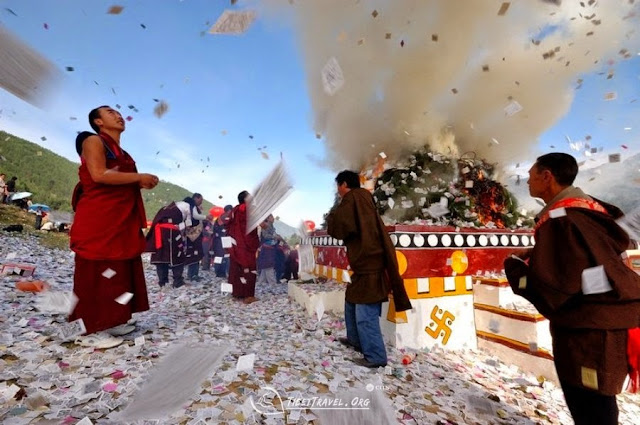 LHA SANG: Tibetans traditionally use 5 aromatic plants in their various sang rituals: juniper (lha), rhododendron (nyen), tamarisk (lu), margosa (tsen) and pine (dut)...."klu bsangs: smoke offering ceremonies to the nagas"..."Dud brDa is smoke divination. The color, volume, and drift of the smoke all have significance." (Ekvall: 1964..pg 270)..."Five aromatic plants used in the sang fumigation rites." (Norbu: 1993..pg 37)..."We do a lhasang in order to purify any setting sun situations and to bring about the genuine mind of sadness. (Trungpa)..."What needs to be purified are all the different types of contaminations (mnol grib) that weaken the positive force." (Norbu: 1995..pg 108)..."the sang offering to the 13 dgra bla protectors." (Norbu: 1995..pg 60)..."In Shinto, harae (purification ceremonies) are very important."..(Jinja:1958..pg 26)...."In ancient Peru, every morning in Cuzco, fires were lit from an aromatic wood specially carved to make it pleasing to the God of the Sun." (Hawkes: 1962..pg 133)... 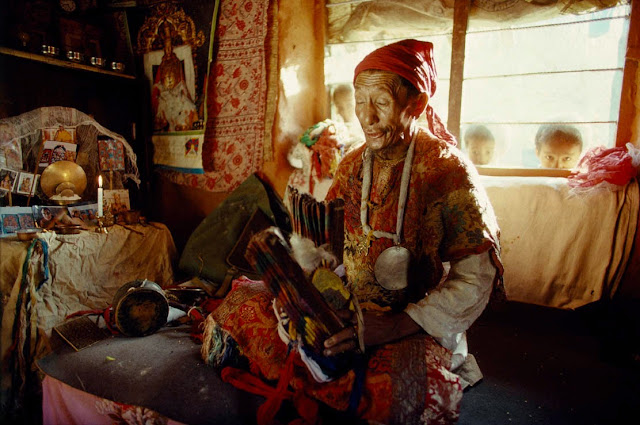 "Shamanism values a balanced relationship between humanity and Nature. Because of the recent alarming increase in pollution and exploitation of the environment, along with the consequential negative ramifications, such as the emergence of new illnesses, it has become even more important for humankind to recover the principle of harmony central to Shamanism in order to repair the damage done to the Earth, as well as to save people and Nature from negativity and illness."