Lady Puabi was the name of a woman buried in one of the richest of the tombs excavated by Woolley at the Royal Cemetery. Puabi (her name, found on a cylinder seal within the tomb, was probably closer to Pu-abum) was approximately 40 years old at the time of her death..... 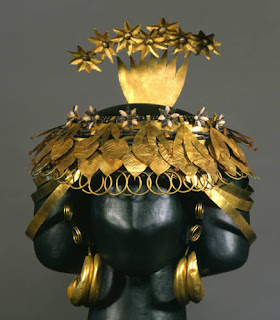 "Queen Puabi’s headdress.....The headdress of gold, lapis lazuli, and carnelian includes a frontlet with beads and pendant gold rings, two wreaths of poplar leaves, a wreath of willow leaves and inlaid rosettes, and a string of lapis lazuli beads, discovered on Queen Puabi’s body in her tomb at the Royal Cemetery of Ur, ca 2550 BCE.

"The headdress and jewelry of Queen Pu-abi, made from gold leaf, lapis lazuli from Balkh, Afghanistan, and carnelian from the Indus Valley. The circlet with spiral trim is draped with willow and beech leaves and topped with small, blue-and-white-filled, gold rosettes. The huge gold comb is surmounted by larger rosettes, also originally filled with blue and white paste. All the rosettes have eight-petals, usually a symbol of the goddess Inanna. Her enormous earrings are double crescents. Clearly the crown and its parts are symbolic, and some scholars suggest that they represent fertility.

"She was buried with 52 attendants — Puabi's tomb was staggering: a magnificent, heavy, golden headdress made of golden leaves, rings, and plates; a superb lyre (see Lyres of Ur), complete with the golden and lapis-lazuli encrusted bearded bulls head; a profusion of gold tableware; golden, carnelian, and lapis lazuli cylindrical beads for extravagant necklaces and belts; a chariot adorned with lioness' heads in silver, and an abundance of silver, lapis lazuli, and golden rings and bracelets.

"Cylinder seal of Lady Pu-abi.....From Ur, southern Iraq....2600 BC.....This cylinder seal was discovered in the 'Queen's Grave' in the Royal Cemetery at Ur. It is engraved with a banquet scene. It has been suggested that this indicates that the owner was female, while a man's seal would have been engraved with a combat scene. Indeed, the cuneiform inscription on this seal reads 'Pu-abi nin'. The Sumerian word 'nin' can be translated as either 'lady' or 'queen'. It is possible that Pu-abi (previously read as Shub-ad) may have been a high priestess in the service of the moon god, Nanna, patron of Ur......The seal was found against the right arm of Pu-abi's body, together with two other seals and three gold pins.....The seal is made from lapis lazuli, which would have come from Afghanistan. This not only shows the extensive trade routes that existed at this time, but also how important Pu-abi was, owning an object made of such an exotic material."....D. Collon, Ancient Near Eastern art (London, The British Museum Press, 1995) 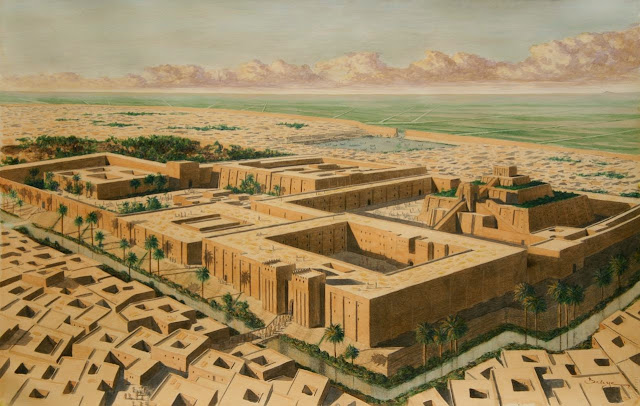 "Royal Tombs of Ur (c 2550 BC)......A site near the modern day city of Al-Nasiriya in southern Iraq. Known locally as Tell al-Muqayyar, this site has also been recognized as the capital city of ancient Sumeria called Ur....Ur was likely first settled during the Ubaid period near the end of the 6th millennium BC. Over time a true city grew, until about 2500 BC, by which time the city was one of the transportation centers of the Sumerian civilization. In this, its heyday, Ur was an important harbor at the head of the Persian Gulf. Because of Ur's extensive trade contacts, the rulers of Ur had access to the wealth of Arabia, India, Iran, and Afghanistan......Sixteen tombs of Ur's elite, rulers buried with about eighty attendants. These tombs held what are some of the world's greatest treasures of the past: a golden dagger encrusted with lapis lazuli; a statue of a ram in a thicket; a lyre decorated with a bull's head; a crown of golden leaves and rosettes belonging to the Lady Puabi."

"Enheduanna (En-hedu-anna), daughter of Sargon the Great, was princess, priestess of the moon god Nanna at Ur in Mesopotamia, now Iraq, earthly embodiment of his spouse Nin-gal, and the first poet whose name we know. We know the names of many high priestesses (en-priestesses or entu), a number of whom probably also wrote hymns and other literature for the temple. We can also tentatively identify en-priestesses from the rolled cap which they often wore. However, not until 400 years after Enheduanna can we identify another priestess as author of a particular piece of writing....When a queen or princess was installed as a priestess, she usually took a religious name with religious meaning. Nin-shata-pada's name means "Lady Chosen by [means of] the Heart [Omens]." Particularly for the city of Ur, scholars know the official names of a large number of high priestesses and, often, how long they lived. For instance, Queen Pu-abi of Ur, whose remains and grave goods were found in the great Royal Cemetery at Ur (2550-2400 BCE), was probably also a priestess. Another royal woman who was both a princess and a priestess was Tuta-napshum. She was installed as en-priestess of the high god En-lil during the reign of Sargon's grandson Naram-Sin (2260-2223 BCE) .http://www.matrifocus.com/SAM07/spotlight.htm

"Uruk gave its name to the Uruk period, the protohistoric Chalcolithic to Early Bronze Age period in the history of Mesopotamia spanning c. 4000 to 3100 BC, succeeded by the Jemdet Nasr period of Sumer proper. Uruk played a leading role in the early urbanization of Sumer in the mid 4th millennium BC. At its height c 2900 BC, Uruk probably had 50,000–80,000 residents living in 6 km of walled area; making it the largest city in the world at the time. The semi-mythical king Gilgamesh, according to the chronology presented in the Sumerian king list, ruled Uruk in the 27th century BC. The city lost its prime importance around 2000 BC, in the context of the struggle of Babylonia with Elam, but it remained inhabited throughout the Seleucid and Parthian periods until it was finally abandoned shortly before or after the Islamic conquest.".....http://en.wikipedia.org/wiki/Uruk 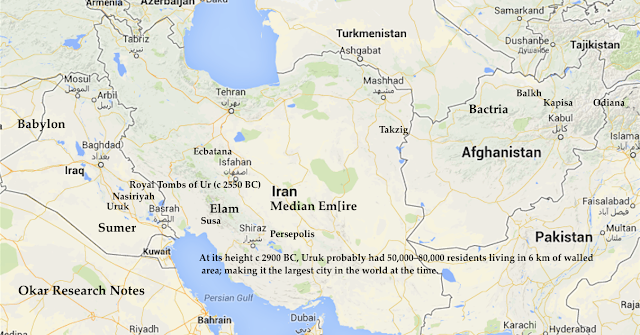