"Shamash (Akkadian Šamaš "Sun"), was a native Mesopotamian deity and the sun god in the Akkadian, Assyrian and Babylonian pantheons. Shamash was the god of justice in Babylonia and Assyria, corresponding to Sumerian Utu. Akkadian šamaš is cognate to Syriac šemša or šimšu Hebrew שֶׁמֶשׁ šemeš and Arabic شمس šams."....http://en.wikipedia.org/wiki/Shamash 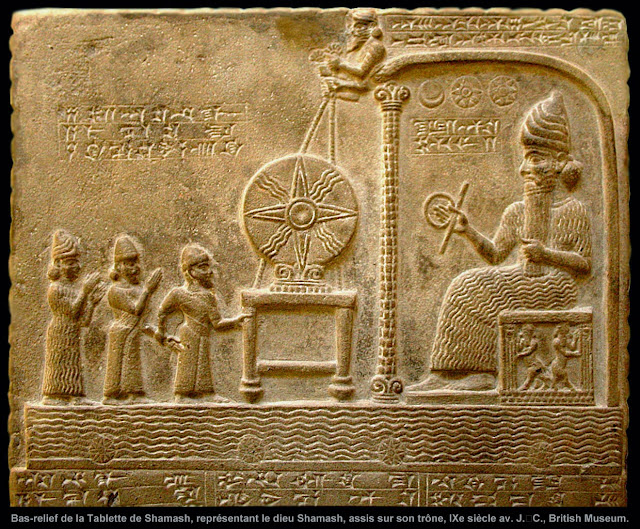 "One unites Sin (moon), Shamash (sun), and Ishtar (goddess of fertility), and corresponds clearly to the Achaemenian triad, Auramazda, Mithra., and Anahita.".....Encyclopedia of Religion and Ethics Part 18 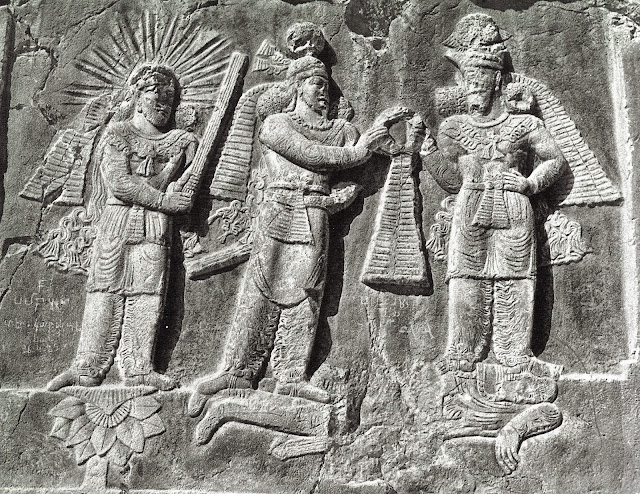 "Investiture of Ardashir II (r. 379-383) (center) by the supreme God Ahuramazda (right) with Mithra (left) standing upon a lotus (Ghirshman, 1962 & Herrmann, 1977). Trampled beneath the feet of Ahura-Mazda and Ardashir II is an unidentified defeated enemy. Of interest are the emannating “Sun Rays” from the head of Mithras. Note the object being held by Mithras. This may be some sort of diadem or even a ceremonail broadsword, as Mithras appears to be engaged in some sort of `knighting`of Ardahsir II as he receives the `Farr`(Divine Glory) diadem from Ahura-Mazda."....http://rafigh1367.blogfa.com/post-15.aspx

"...a reference to Shamash is the Babylonian epic Gilgamesh. When Gilgamesh and Enkidu travel to slay Humbaba, each morning they pray and make libation to shamash in the direction of the rising sun for safe travels. Gilgamesh receives dreams from Shamash, which Enkidu then interprets..."...http://en.wikipedia.org/wiki/Shamash

"The two chief centres of sun-worship in Babylonia were Sippar, represented by the mounds at Abu Habba, and Larsa, represented by the modern Senkerah. At both places the chief sanctuary bore the name E-barra (or E-babbara) "the shining house"—a direct allusion to the brilliancy of the sun-god. Of the two temples, that at Sippara was the more famous, but temples to Shamash were erected in all large centres – such as Babylon, Ur, Mari, Nippur, and Nineveh.".....http://en.wikipedia.org/wiki/Shamash

"Both in early and in late inscriptions Shamash is designated as the "offspring of Nannar"; i.e. of the moon-god, and since, in an enumeration of the pantheon, Sin generally takes precedence of Shamash, it is in relationship, presumably, to the moon-god that the sun-god appears as the dependent power. Such a supposition would accord with the prominence acquired by the moon in the calendar and in astrological calculations, as well as with the fact that the moon-cult belongs to the nomadic and therefore earlier stage of civilization, whereas the sun-god rises to full importance only after the agricultural stage has been reached."....http://en.wikipedia.org/wiki/Shamash

"Ur-Engur of the Ur dynasty (c. 2600 BCE) declared that he rendered decisions "according to the just laws of Shamash."......http://en.wikipedia.org/wiki/Shamash 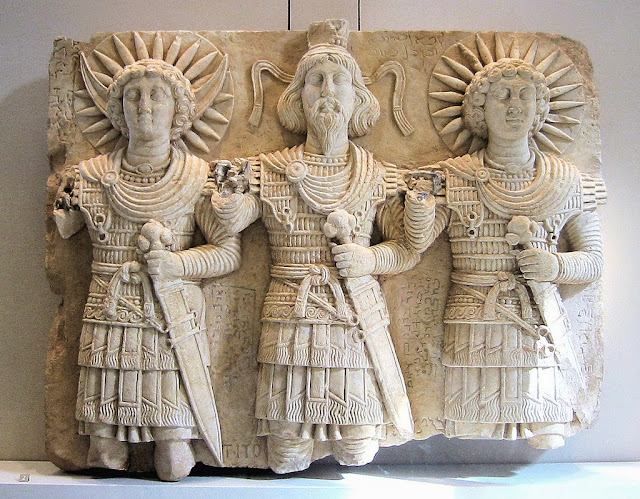 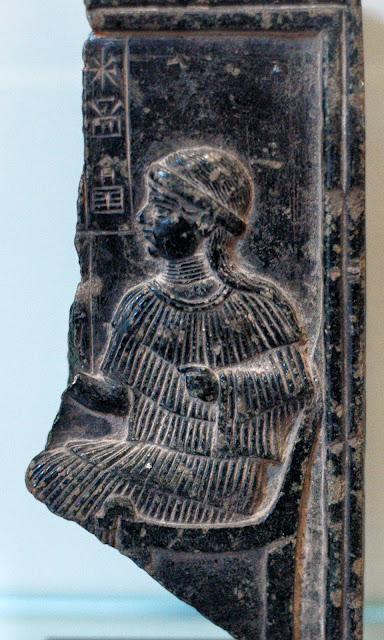 "Gilgamesh visits his mother, the goddess Ninsun, who seeks the support and protection of the sun-god Shamash for their adventure.......In Sumerian mythology, Ninsun or Ninsuna ("lady wild cow") is a goddess, best known as the mother of the legendary hero Gilgamesh, and as the tutelary goddess of Gudea of Lagash. Her parents are the deities Anu and Uras.....Ninsun is called "Rimat-Ninsun", the "August cow", the "Wild Cow of the Enclosure", and "The Great Queen"."

"Modern religions tend to dismiss the ancient 'Sun Gods' as semi-theistic anthropomorphic Nature Spirits which was somewhat true in the Quasi-popular level of worship.....The deeper levels of meaning saw the 'Sun God' as representative of direct or primordial light and the 'Moon God' as representative of reflected light or the mirror.....The Sumerians originally practiced a polytheistic religion, with anthropomorphic deities representing cosmic and terrestrial forces in their world. During the middle of the third millennium BCE, Sumerian deities became more anthropocentric and were "...nature gods transformed into city gods.".......http://en.wikipedia.org/wiki/Sumerian_mythology 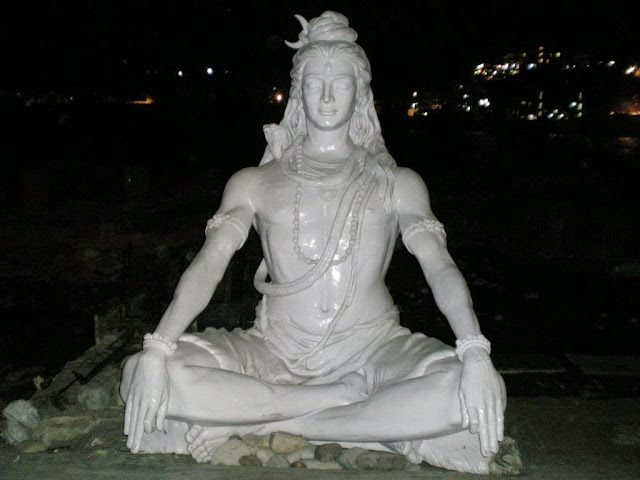