Strirajya: The Land of Women Warriors (330 BC)

STRITAJYA.. (Suvarnagotra)(Sauromatae)..The Land of Women...."An area that Alexander the Great was not able to conquer...(Stein:1972..pg 34) An interesting Kingdom of women warriors northwest of Shang Shung.....See Hermann: An Historical Atlas of China: 1966..."The country referred to about the ant's gold and the Amazons whom Alexander was not able to conquer." (Stein: 1972..pg 35)...."Alexander met with Thalestris, Queen of the Amazons in Parthia in 330 BC (Near the Caspian Sea). She arrived with 300 women warriors in full armour, equipped as horse warriors. She told him she wanted a child by him. He spent 13 days with her.She died soon afterwards and with her disappeared the name of the Amazons." (Newark: Women Warriors..1989)..."Women warriors were quite eviden in the Massagetae of 500 BC. Herodotus reported: 'the women ride hunting and to war and dress the same as men'. In the reign of the Median King Astibar there was a war between the Sacae and the Medes. The leader of the Sacae was called Zarina, a female warrior. When Amorg, a later king of the Saccae was captured by Cyrus of Persia, his wife Sparetra gathered an army of 300,000 men and 200,000 women. According to Herodotus, when the Persians went to war with the Massagetae, the leader of the latter was Tomyris, widow of their king." (Rudenko: 1970..pg 212)... 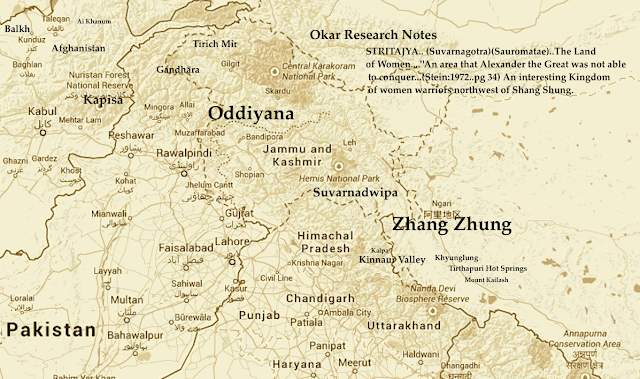 "The Chinese-pilgrim monk, Xuanzang, c. 634 CE, remarks that Mo-lo-so, also called San-po-ho borders with Suvarnagotra or Suvarnabhumi (Land of Gold), identical with the Kingdom of Women (Strirajya). According to Tucci, the Zhangzhung kingdom, or at least its southern districts, were known by this name by the 7th-century Indians.

"Mastyendranath falls under the spell of the women in Stri-Rajya, particularly its two queens, Kamala and Mangala, and is unable to leave their enchanted plantain orchard (kadali vana). After many years, Mastyendranath’s student, Gorakshanath learns of his whereabouts and enters this enchanted land disguised as a woman. Since he too is a great yogi, the gandharva’s powers have no impact on him. He goes around the streets beating a drum and singing, “Pay attention Matsyendra, Gorakh has come.” Hearing the drumbeats and the song, Mastyendranath comes back to his senses and leaves the enchanted kingdom of women."....http://devdutt.com/articles/the-land-of-women.html

"According to Rajatarangini of Kalhana, king Lalitaditya Muktapida of Kashmir leads a war expedition against the tribes of north (i.e. north of Kashmir) and in sequence, encounters the Kambojas, Tusharas, Bhauttas, Daradas, Valukambudhis, Uttarakurus, Strirajya (mythical or otherwise) and Pragjyotisha with whom he fights one after the other......Rajatarangini places Uttarkuru land in the neighborhood of Strirajya. Based on Yuan Chwang's evidence, Strirajya is identified as a country lying north of Kashmir, south of Khotan and west of Tibet....

"Pingala, a queen of all-women’s domain (Stri-rajya), desired to have male offspring and prayed to Lord Anjaneya. At this juncture, Macchendra travels to her place and meets her. They develop mutual attraction and in the due course they beget two male children. Macchendra forgets himself in her company settles there for several years. In the meanwhile Gorakha, Macchendra’s prime disciple, goes in search of his Guru and finds that he is lodged in a female-domain, where men were not permitted. So he dresses himself like a woman and beats a ‘maddale’ (a kind of drum), in a tune that sounds “Chal Macchendra, Gorak Aya”. Macchendra awakens from the marital pleasures and returns with Gorakha to pursue yogic practices."....http://tulu-research.blogspot.com/2008/01/80-macchendra-goraka-and-pingala.html

"The women of the Stri Rajya, and of Koshola (Oude), are full of impetuous desire, their semen falls in large quantities and they are fond of taking medicine to make it do so.".....The Kama Sutra of Vatsyayana, tr. by Richard Burton, [1883], at sacred-texts.com