"Hvare.khshaeta..... (Hvarə.xšaēta, Huuarə.xšaēta) is the Avestan language name of the Zoroastrian divinity of the "Radiant Sun.".....hvar "Sun" has khshaeta "radiant" as a stock epithet. Avestan hvar derives from the Indo-Iranian root *svar "to shine," from which Vedic Sanskrit Surya - again "Sun" - also derives. In Middle Persian, Hvare khshaeta was contracted to Khwarshēd, continuing in New Persian as Khurshēd/Khorshīd.....The short seven-verse 6th Yasht is dedicated to Hvare-khshaeta, as is also the Avesta's litany to the Sun. The 11th day of the Zoroastrian calendar is dedicated to and is under the protection of Hvare-khshaeta. Although in tradition Hvare-khshaeta would eventually be eclipsed by Mithra as the divinity of the Sun (this is attributed to "late" syncretic influences, perhaps to a conflation with Akkadian Shamash), in scripture the Sun is still unambiguously the domain of Hvare-khshaeta".....http://en.wikipedia.org/wiki/Hvare-khshaeta 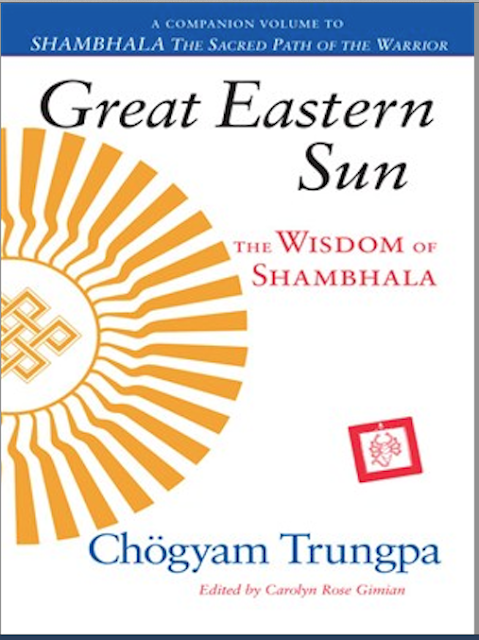 "GREAT EASTERN SUN: (Tibetan: "Sharchen Nyima"), "The vision of the Great Eastern Sun (is that) no human being is a lost cause." (pg 59) "The Great Eastern Sun illuminates the way of discipline for the warrior." (pg 63) "The great Eastern Sun provides the means to take advantage of your life in the fullest way." (pg 64) "...is the expression of true human goodness, based not on arrogance and aggression, but on gentleness and openness. it is the way of the warrior." (pg 108)"The Great Eastern Sun vision...is based on appreciating ourselves...and our world, so it is a very gentle approach." (pg 57) "The way of the Great Eastern Sun is based on seeing that there is a natural source of radiance and brilliance in this world - which is the innate wakefulness of human beings." (pg 97-98)......"Sacred World is connected with East, because there are always possibilities of vision in the world. East represents the dawn of wakefulness." "...the sacred world is lighted by the sun, which is the principle of never-ending brilliance and radiance...[and] with seeing self-existing possibilities of virtue and richness in the world." (pg 127) (see Sacred World.) If you in the sky, the sun is there. By looking at it, you don't produce a new sun. ... When you discover the sun in the sky, you begin to communicate with it. Your eyes begin to relate with the light of the sun. - See "Drala" principle." (pg 106)."..... Shambhala Training Glossary...Presented by: The Shambhala Center of Seattle....http://www.glossary.shambhala.org/#GES

"In the Achaemenian inscriptions Mithra, together with Anāhitā, is the only other deity specifically mentioned. Although the ancient pantheon contained an individual sun god, Hvar Khshaita, in the eastern Iranian traditions reflected in the Avesta, Mithra has a hint of connection with the sun, more specifically with the first rays of dawn..."..http://www.britannica.com/EBchecked/topic/277898/Hvar-Khshaita

"In the A vesta MiQra- travels with the Hvar xlaeia-, the bright sun...."...Mithraic Studies: Proceedings of the First International Congress of ... By John R. Hinnells

"Khvarenah or khwarenah (xᵛarənah) is an Avestan language word for a Zoroastrian concept literally denoting "glory" or "splendour" but understood as a divine mystical force or power projected upon and aiding the appointed. The neuter noun thus also connotes "(divine) royal glory," reflecting the perceived divine empowerment of kings. The term also carries a secondary meaning of "(good) fortune"; those who possess it are able to complete their mission or function......In 3rd-7th century Sassanid-era inscriptions as well as in the 9th-12th century texts of Zoroastrian tradition, the word appears as Zoroastrian Middle Persian khwarrah, rendered with the Pahlavi ideogram GDE, reflecting Aramaic gada "fortune."...In the Iranian languages of the middle period, the word is also attested as Bactrian far(r)o, Khotanese pharra, Parthian farh, Sogdian f(a)rn, and Ossetic farnae and farn, though in these languages the word does not necessarily signify "glory" or "fortune": In Buddhism, Sogdian farn and Khotanese pharra signified a "position of a Buddha," that is, with "dignity" or "high position." This meaning subsequently passed into Tocharian. In Manicheanism, Sogdian frn signified "luck" and was a designator of the "first luminary". Manichean Parthian farh again signifies "glory." In Scytho-Sarmatian and Alan culture, Digoron Ossetic farnae and Iron Ossetic farn signified "peace, happiness, abundance, fortune."......http://en.wikipedia.org/wiki/Khvarenah 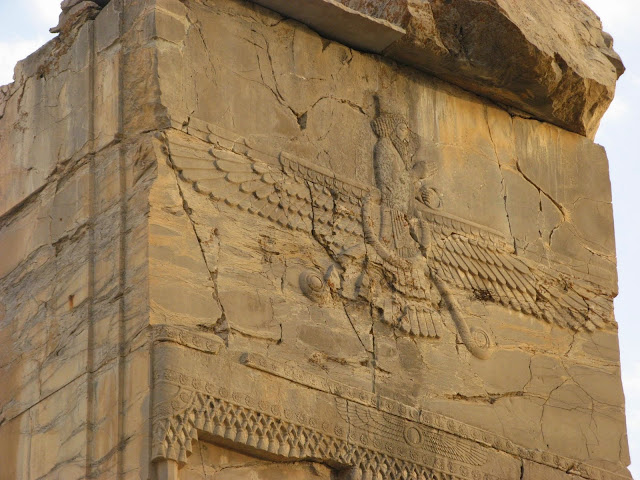 "FARR(AH), XᵛARƎNAH, literally, “glory,” according to the most likely etymology and the semantic function reconstructed from its occurrence in various contexts and phases of the Iranian languages. In all Iranian dialects the form had initial f-, except Avestan and Pahlavi, in which we find initial xᵛ- (hṷ-): xᵛarənah- and xwarrah (cf. NPers. ḵorra, below). Despite Philippe Gignoux’s doubts (1986, pp. 9-10; cf. Gnoli 1989a, pp. 152-53), the latter was probably also the Middle Persian form in Sasanian inscriptions, where, as in Pahlavi, it was written with the Aramaic ideogram GDE".....http://www.iranicaonline.org/articles/farrah#sthash.wX7buBur.dpuf

"Lungta is a mythical Tibetan creature from pre-Buddhist times that combines the speed of the wind and the strength of the horse to carry prayers from earth to the heavens.....Lungta is associated with positive energy or ‘life force’ and with ‘good luck’. ".....http://www.rigpawiki.org/index.php?title=Lungta

"Proto-Indo-Iranians worshiped many gods including several ‘nature gods’ such as Asman, the Lord of sky (Aseman in modern Persian), Zam, the earth goddess (Zamin in modern Persian) and the sun and the moon, Hvar and Mah (khorshid & Mah in modern Persian). There were two gods of the Wind, Vata and Vayu, the wind that blows and the wind that brought the rain-clouds. Vata the rain-bringer was associated with ‘Harahvati Aredvi Sura’, the Sanskrit Sarasvati meaning ‘Possessing waters’.....The Indo-Iranians believed there was a natural law which ensured that nature followed its’ course. Day and night continued and sun maintained its’ regular movement. They called this law ‘rta’ the Avestan ‘asha’ that came to represent the cosmic order. Asha had ethical implications and governed human conduct as well.."....http://www.iranchamber.com/religions/articles/pre_zoroastrian_religions.php#sthash.gjXYn0fD.dpuf

"The Young Avesta's area of composition comprised - at least - Sīstān/Arachosia, Herat, Merv and Bactria. It went through the following stages:....Transfer of the Avesta to Persis in Southwest Iran, possibly earlier than 500 B.C.... The various texts are thought to have been transmitted orally for centuries before they found written form in the 3rd c. AD.... a written version of the religious texts had existed in the palace library of the Achaemenid kings (559–330 BC), but which was then supposedly lost in a fire caused by the troops of Alexander....the texts must indeed be the remnants of a much larger literature, as Pliny the Elder had suggested in his Naturalis Historiae, where he describes one Hermippus of Smyrna having "interpreted two million verses of Zoroaster" in the 3rd century BC.".....K. Hoffmann, 1987, AVESTAN LANGUAGE I-III, Encyclopaedia Iranica. 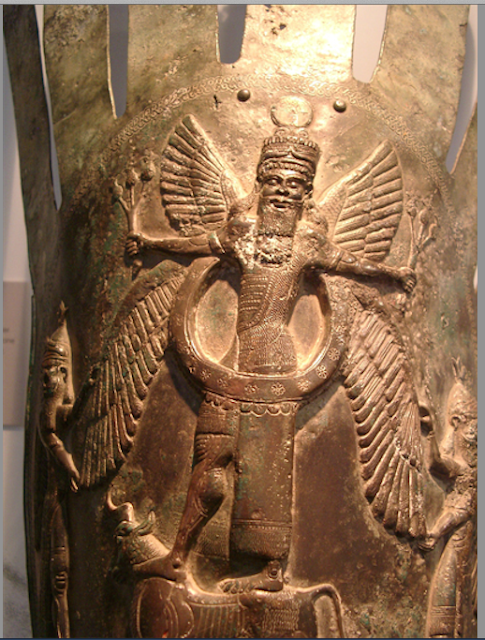 "Shivini or Artinis (the present form of the name is Artin, meaning "sun rising" or to "awake", was a solar god in the mythology of the Urartu. He is the third god in a triad with Khaldi and Theispas and is cognate with the triad in Hinduism called Shivam. The Assyrian god Shamash is a counterpart to Shivini. He was depicted as a man on his knees, holding up a solar disc. His wife was most likely a goddess called Tushpuea who is listed as the third goddess on the Mheri-Dur inscription. Shivini is generally considered a good god, like that of the Egyptian solar god, Aten, and unlike the solar god of the Assyrians, Ashur."....Turner, Patricia and Charles Coulter. Dictionary of Ancient Deities. Oxford Univ. Press US, 2001.