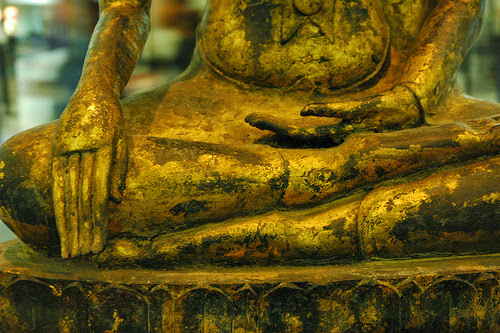 Bhumisparsha (Earth Witness) Mudra..."Bhumisparsha means 'touching the earth'. It is more commonly known as the 'earth witness' mudra. This mudra, formed with all five fingers of the right hand extended to touch the ground, symbolizes the Buddha's enlightenment under the bodhi tree, when he summoned the earth goddess, Sthavara, to bear witness to his attainment of enlightenment." ....http://www.religionfacts.com/buddhism/symbols/mudra_bhummisparsha.htm 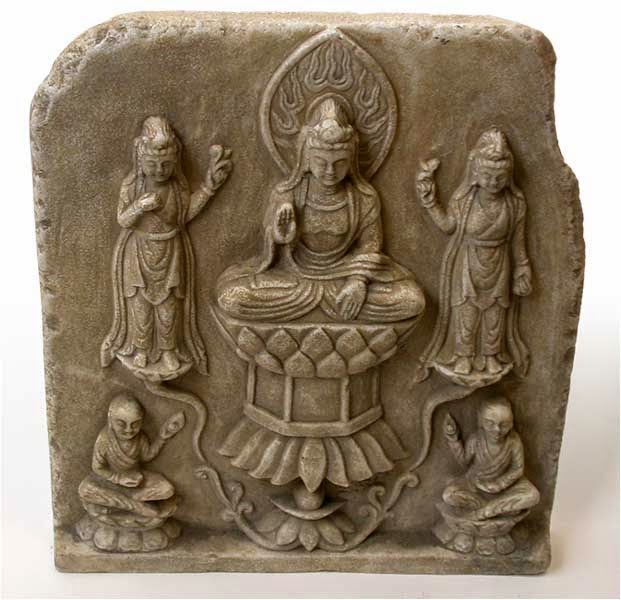 "Sthāvara — not moving...Sthavara (Sanskrit) [from the verbal root stha to stand]..... Fixtures; as an adjective, unmoving or fixed. Used for entities which are alive but not self-moving, and therefore applicable to the minerals and plants; used in contrast with jangama (goers), the animal and human kingdoms. ....The first goddess who assisted Sudhana in his quest was the earth goddess, designated here as Sthavara....Buddhist Goddesses of India".......By Miranda Eberle Shaw

"The 'Earth Witness' Buddha is one of the most common iconic images of Buddhism. It depicts the Buddha sitting in meditation with his left hand, palm upright, in his lap, and his right hand touching the earth. This represents the moment of the Buddha's enlightenment." 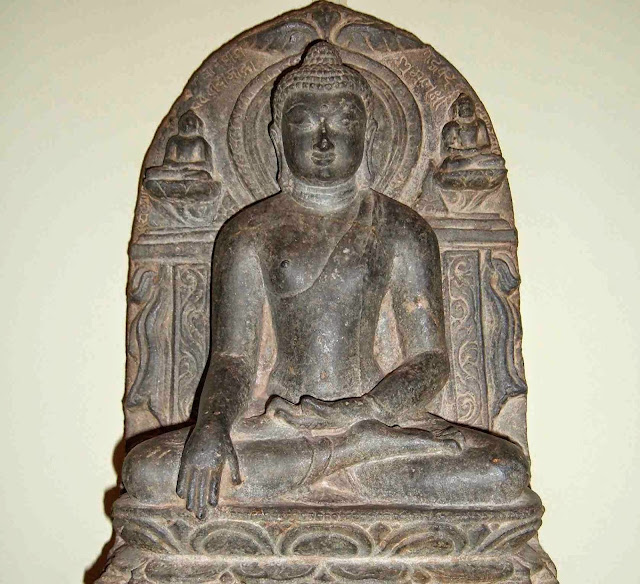 "A mudra in Buddhist iconography is a body posture or gesture with special meaning. The earth witness mudra is also called the Bhumi-sparsha ("gesture of touching the earth") mudra. This mudra represents unshakability or steadfastness. The Dhyani Buddha Akshobhya also is associated with the earth witness mudra because he was immovable in keeping a vow never to feel anger or disgust at others.......The mudra also symbolizes the union of skillful means (upaya), symbolized by the right hand touching the earth, and wisdom (prajna), symbolized by the left hand on the lap in a meditation position.

"Karen Armstrong wrote in her book, Buddha (Penguin Putnam, 2001, p. 92), about the earth witness mudra:....'It not only symbolizes Gotama's rejection of Mara's sterile machismo, but makes a profound point that a Buddha does indeed belong to the world. The Dhamma is exacting, but it is not against nature. . . . The man or woman who seeks enlightenment is in tune with the fundamental structure of the universe.....Buddhism teaches that nothing exists independently. Instead, all phenomena and all beings are caused to exist by other phenomena and beings. The existence of all things is interdependent. Our existence as human beings depends on earth, air, water, and other forms of life. Just as our existence depends on and is conditioned by those things, they also are conditioned by our existence.....The way we think of ourselves as being separate from earth and air and nature is part of our essential ignorance, according to Buddhist teaching. The many different things -- rocks, flowers, babies, and also asphalt and car exhaust -- are expressions of us, and we are expressions of them. In a sense, when the earth confirmed the Buddha's enlightenment, the earth was confirming itself......"....http://buddhism.about.com/od/eightauspicioussymbols/a/earthwitness.htm 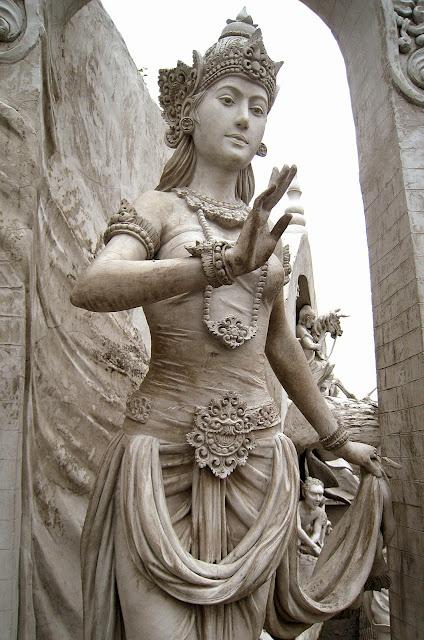 "Prithvi (Sanskrit: पृथ्वी pṛthvī, also पृथिवी pṛthivī) is the sanskrit name for earth and its essence Prithivi Tattwa, in the form of a mother goddess or godmother. Prithvi is also called Dhra, Dharti, Dhrithri, meaning that which holds everything.....As Prithvi Mata "Mother Earth" she contrasts with Dyaus Pita "father sky". In the Rigveda, Earth and Sky are frequently addressed in the dual, probably indicating the idea of two complementary half-shells. She is the wife of Dyaus Pita ('father Dyaus').......Prithvi also appears in Early Buddhism where she appears in the Pali Canon, dispelling the temptation figure Mara by attesting to Gautama Buddha's worthiness to attain enlightenment.".........http://en.wikipedia.org/wiki/Prithvi

"The Earth Goddess is a universal symbol and she has many names around the world - Isis, Gaia, Demeter, Ceres, Sheela na Gig , and Pachamama are a few names from different cultures. In Sanskrit there are names like Sthavara, meaning Stable One, or Prthvi, meaning Earth or Vasundhara which means the Bearer of Treaure......in many other religions this sort of confirmation of teachers attainment comes from the sky rather than the earth - it may be in the form of angels or a voice from the heavens, but it is often from the sky rather than the earth. .....The Earth Goddess is both Sthavara, which means the Stable One and Vasundhara, which means the Bearer of Treasure – the treasures of confidence and abundance, Sraddha and Dana, Faith and generosity.".....http://ratnaghosha.blogspot.com/2012/04/touching-earth.html