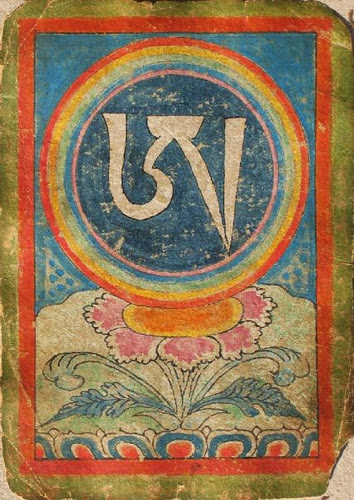 "A-Tri (A-Khrid), literally “The Guidance of the Primordial State” is one of the three principal Dzogchen (Great Perfection) traditions within Bön. It was founded in the 11th century by Ritro Chenpo (1038-1096), known simply as “the holy man,” who systematized previous teachings and added his own mind-treasures to create a succession of eighty practices. These were later organized into thirty sessions and finally during the 13th century condensed into a practice manual of fifteen sessions by the renowned lama Drugyalwa Yungdrung. Over the next two years Tenzin Wangyal Rinpoche will offer comprehensive teachings and practice instruction from Drugyalwa’s text “The Fifteen Stages of Practice that Guide One to the Primordial State.” These stages begin with preliminary practices to ripen the consciousness and progress through practices to stabilize the mind and directly realize its true nature."..... 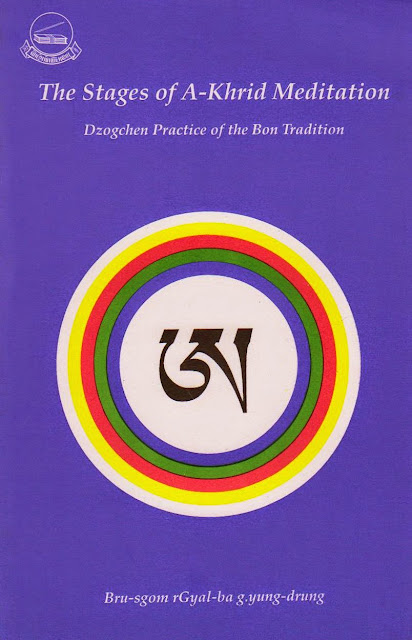 "The Stages of A-Khrid Meditation Dzogchen Practice of the Bon Tradition......Per Kvaerne (Translator)....Thupten K. Rikey (Translator)......This work represents one tradition of th system of meditation known as "The Great Perfection" (rdzogs pa chen po), in the form of a methodical and practical guide for those noble beings who set themselves the task of leading others to enlightenment through the practice of the Great Perfection.....The A-Khrid teachings regarding the Ultimate Origin-(A) is believed to have a historical source in the great lama rMe'u dGongs-mdzod(1038-1096). This translation presents a condensed version of his original composition, written by Bru-sgom rGyal gyung-drung(1242-1296)." 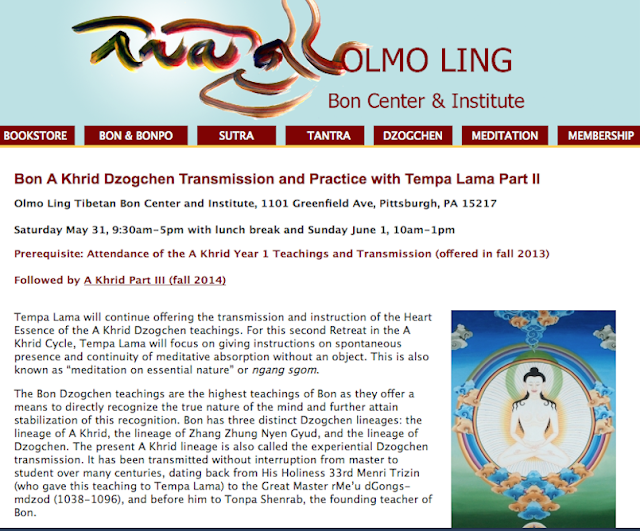 The Stages of A-Khrid Meditation (Dzogchen Practice of the Bon Tradition)...by Bru-sgom rGyal-ba g.young-drung, Translated by Per Kvaerne and Thupten K. Rikey...the A-khrid is held to have an historical origin which can be precisely defined, being initiated by the lama known as rMe'u dGongs-mdzod, 'the Great Hermit' of the rMe'u clan, who lived from 1038 to 1096.....A-Khrid was promulgated by the great hermit, dGongs-mdzod (1038-1096). His system is divided into 80 periods called A-khrid thu-mtshams brgyad-cu-pa, each period lasting one or two weeks. After completing this course the adept is qualified and given the title rTogs-ldan. However, the system of 80 periods was reduced to 30 by 'A-aha Blo-gros rgyal-mtshan (1198-1263) and a little later this was further reduced to 15 by Bru Rgyal-ba g. young-drung (1242-1290). Since then the system has been known as Bru'I a-khrid thun-mtshams bco-lnga-pa the fifteen period A-khrid of Bru" (p. 215).......
Contents.....
Meditation on Impermanence (Session One)
Taking Refuge after Having Cultivated Bodhicitta (Session Two)
Mandala Offering: a means to complete the accumulation of merit (Session Three)
Entreaty: a means to receive full blessings (Session Four)
Mental Grasping (Session Five)
The Equipoising (Session Six)
Spiritual exertion for the obtaining of stability
Spiritual exertion for the procuring of benefit (Session Seven)
The Confrontation with the Substance of Ultimate Nature (Session Eight)
Discerning of Spontaneous Wisdom
Casting off defilements produced by the intellect (Session Nine)
Gaining of Control over Stainless Wisdom (Session Ten) 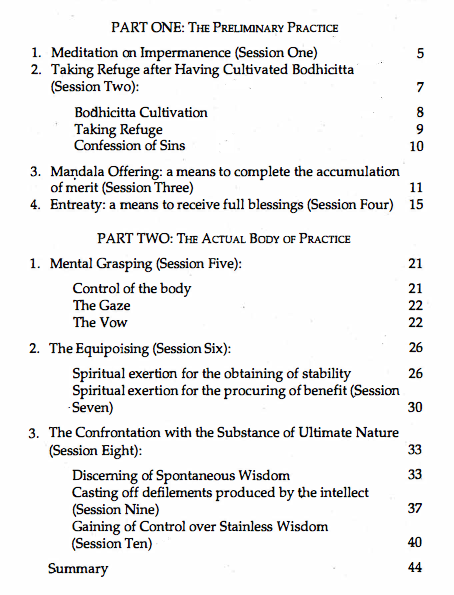 Bonpo Studies: The A Khrid System of Meditation ..... Part 1 of an article by Per Kvearne ......http://vajrayana.faithweb.com/A-tri.pdf

"Publications (other than texts in Tibetan) relevant to the Great Perfection of Bon have not been numerous. Brief excerpts from texts belonging to the Zhang zhung snyan rgyud and the bsGrags paskor gsum traditions were translated by Giacomella Orofino in 1985: Insignamenti tibetani su morte e liberazione. Testi inediti dale piuantiche tradizioni del Tibet, Roma (Edizioni Mediterranee); English revised edition 1990. A short but important contribution was Chap. VIII, "rDzogs chen in the Bonpo Tradition", in Samten G. Karmay, The Great Perfection. A Philosophical and Meditative Teaching of Tibetan Buddhism, Leiden (E.J. Brill), 1988, pp. 201-205.....In 1993 two books on this topic appeared. Tenzin Wangyal, a Geshe from the Bonpo Monastery at Ochghat, Himachal Pradesh, presented the Great Perfection according to his own training and experience in Wonders of the Natural Mind. The Essence of Dzogchen in the Native Bon Tradition of Tibet, Barrytown, N.Y. (Station Hill Press). The other book, entitled Heart Drops of Dharmakaya. Dzogchen Practice of the Bon Tradition, Ithaca, N.Y. (Snow Lion Publications), is a composite volume. The main part of the book is a somewhat free English rendering of a work by the famous Bonpo lama Shar-rdza bKra-shis rgyal-mtshan (1859-1934), with the comments (based on tape-recordings) of Slob dpon bsTan-'dzin rnam-dag, an essay on the phenomenon of the 'rainbow body' ('ja' lus), a short history of Bon, illustrations, Tibetan text, a preface by the editor of the volume, Richard Dixey, and a short Introduction and a Bibliographic Essay by myself. An article on the A-khrid which I published in 1983 is reprinted as the Introduction to the present volume."....http://www.exoticindiaart.com/book/details/stages-of-khrid-meditation-dzogchen-practice-of-bon-tradition-IDK349/