Hozho: Dine’ Concept of Balance and Beauty......"Consideration of the nature of the universe, the world, and man, and the nature of time and space, creation, growth, motion, order, control, and the life cycle includes all these other Navajo concepts expressed in terms quite impossible to translate into English. The synthesis of all the beliefs detailed above and those concerning the attitudes and experiences of man is expressed sa’a naghai, usually followed by bik’e hozho..... The concept of sa’ah naaghaii bik’eh hozho is more commonly known as hozho in the shorthand. Sa’ah naaghaii bik’eh hozho consists of two distinct phrases that together form a unity. The whole phrase exemplifies a model of balance in living. At the core of its meaning, hozho is about balance. It is about health, long life, happiness, wisdom, knowledge, harmony, the mundane and the divine. For the Navajo people, hozho represents a synthetic and living description of what life on the surface of planet Earth should be, from birth until death at an old age."....http://www.robertsdrake.com/files/Hozho.htm 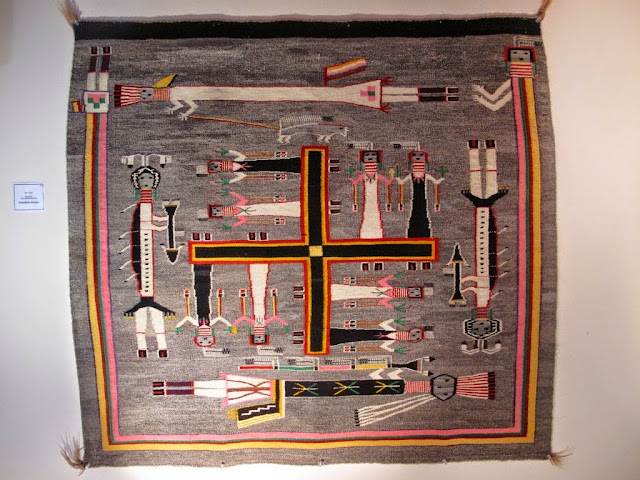 "Blessingway, central ceremony of a complex system of Navajo healing ceremonies known as sings, or chants, that are concerned with healing, creation, harmony and peace. The song cycles recount the elaborate Navajo creation story related to the rites contained within the Blessing Way.....Unlike the other healing ceremonies, the Blessingways are not intended to cure illness but are used to invoke positive blessings and to avert misfortune. The Blessingway is comparatively short, lasting only two nights, and is often part of longer rites. Among other things, it is performed to bless and protect the home, to prevent complications of pregnancy, and to enhance the good fortune that attendees and participants hope to foster through the kinaalda (girl’s puberty rites). As a part of Navajo religious practices, the Blessingway is considered to be a highly spiritual, sacred, and private event.".....http://www.britannica.com/EBchecked/topic/69323/Blessingway

"Navajo spiritual practice is about restoring health, balance, and harmony to a person's life. Others include the Hoghan Blessing Ceremony and the 'Baby's First Laugh Ceremony'. Otherwise, ceremonies are used to heal illnesses, strengthen weakness, and give vitality to the patient. Ceremonies restore Hozhò, or beauty, harmony, balance, and health.....Protection ceremonies, especially the Blessing Way Ceremony, are used for Navajos that leave the boundaries of the four sacred mountains, and is used extensively for Navajo soldiers going to war. Upon re-entry, there is an Enemy Way Ceremony, or Nidáá', performed on the person, to get rid of the evil things in his/her body, and to restore balance in their lives. This is also important for Navajo soldiers returning from war; many soldiers, whether or not they are Navajo, often suffer psychological damage, such as post-traumatic stress disorder, from participating in warfare, and the Enemy Way Ceremony helps heal their damaged minds.".....http://www.navajorugrepair.com/NavajoSpirit.htm 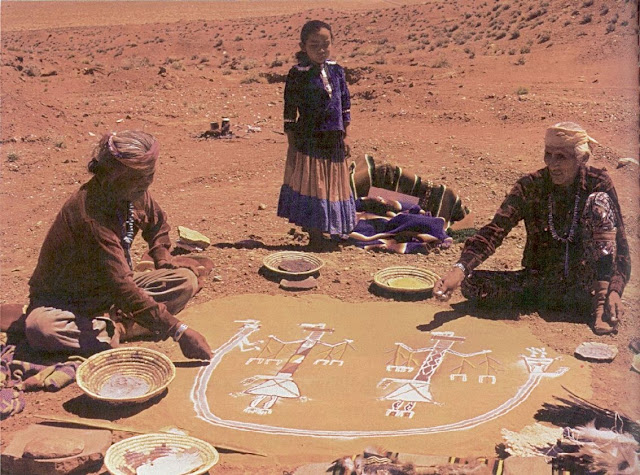 "The Diyin Dine’é are considered to be people of this cosmic Wind pervading life, that their movements are the hidden dynamics behind it, and the ritual proposes to correct the imbalance of Wind within the patient that is causing the ailment. This is why Sandpaintings are described as the place where the gods “come and go.”....http://inhyndsight.wordpress.com/2013/06/19/beauty-as-balance-hozho-and-the-transformative-powers-of-navajo-sandpainting/

"The process of engendering hozho and finding balance in SNBH, is continually recreated in the “main stalk” of all the Navajo ceremonies, that is, the Blessingway. The Dine’ language name for this ceremony is Hozhooji’, and is “synonymous with the continuation of their way of life”.....The ceremony itself was apparently designed to attract the power of the holy people. Goodness and balance are conferred to the People (Dine’) from the Holy People, the Diyinii. The Diyinii are the divine supernaturals who not only created all the qualities of worldly existence but created the Hozhooji (Blessingway) ritual and gave it to the people for their benefit. The ceremony itself is a creation ritual. Through the process of the Blessingway, the community and its individuals acquire knowledge. ".....http://www.robertsdrake.com/files/Hozho.htm

"There are said to be approximately fifty-eight to sixty sacred ceremonies. Most of them last four days or more; to be most effective, they require that relatives and friends attend and help out. Outsiders are often discouraged from participating, in case they become a burden on everyone, or violate a taboo. The ceremony must be done in precisely the correct manner to heal the patient, and this includes everyone that is involved.".....http://www.navajorugrepair.com/NavajoSpirit.htm

"In ancient cities of Central Asia, shrines to the Gods and Goddesses were erected at the spring in the village square. People would circumambulate these shrines and make offerings. Cities were organized with the same dignity. There were tremendous traditions that understood how things worked but we do not know the secret rites of those traditions. The shrines to the Gods and Goddesses have become tourist pieces. The deities have been forgotten and abused. The incantations to awaken presence have been forgotten. The deities, shrines, ceremonies, traditions have all been suppressed and dismantled. The earth has a lot of facets, a lot of gods and warrior gods are still present. They can still be invoked. The deities and worship sites of the Native Americans have always been kept secret. Even with the complete desecration of America these Gods have not been destroyed. We can still visit these sacred sites and perform the appropriate ceremonies, just appreciating what is natural...Naturalism." 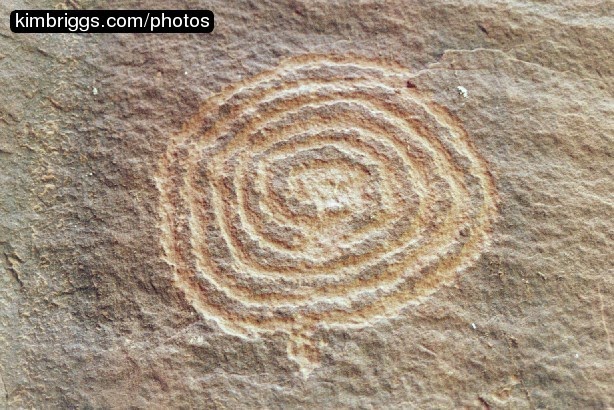 "In Navajo culture, healing takes on a holistic view in which focus is on restoring harmony to the patient, not merely curing symptoms. The basis of health centers around the idea of hózhǫ́, which can be best defined as "harmony," "order," or "beauty." The concept of universal harmony stems from Diné origin where First Man and First Woman, through prayer chant and ritual, were able to influence power in all things to create the world and set everything into a state of balance. The significance of this universal order is correlated with health in that wellness or illness is believed to stem from changes in one's harmony with his/her surroundings.".....http://en.wikipedia.org/wiki/Navajo_medicine 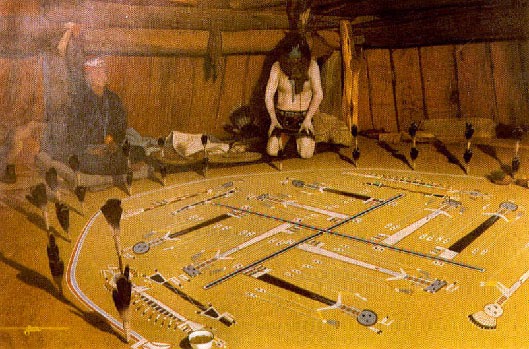 "Hatałii are traditional medicine men who are called upon to perform healing ceremonies. Each medicine man begins training as an apprentice to an older practicing singer. During apprenticeship, the apprentice assembles medicine bundles (jish) required to perform ceremonies and assist the teacher until deemed ready for independent practice. Throughout his lifetime, a medicine man can only learn a few chants as each requires a great deal of time and effort to learn and perfect. Songs are orally passed down in traditional Navajo from generation to generation. Unlike other American Indian medical practitioners that rely on visions and personal powers, a healer acts as a facilitator that transfers power from the Holy People to the patient to restore balance and harmony.".....http://en.wikipedia.org/wiki/Navajo_medicine

"Navajo Whirling Log (Swastika)....Swastika is Sanskrit meaning “well-being”....The Whirling Log symbol is associated with a narrative involving a man (sometimes called the Culture Hero) who takes a journey down the San Juan River in a hollowed out log canoe. During his adventure, he encounters whirlpools and a special event where the San Juan River meets the Colorado River. There he comes upon a whirling cross with Yei figures seated on the cross. From the yeis he learns much knowledge which he takes back to his people."... Dottie Indyke. “The History of an Ancient Human Symbol.” April 4, 2005. originally from The Wingspread Collector’s Guide to Santa Fe, Taos, and Albuquerque, Volume 15....http://nativeamericanjewelrytips.wordpress.com