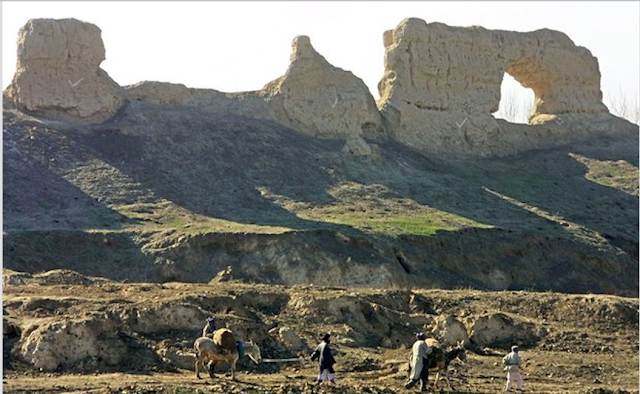 2600 BC ....."Balkh is one of the oldest cities in the world...Since the Indo-Iranians built their first kingdom in Balkh (Bactria, Daxia, Bukhdi) some scholars believe that it was from this area that different waves of Indo-Iranians spread to north-east Iran and Seistan region...The period between 26th-20th century BC was the most important period in the history of Balkh; it's in this relatively short period that a kingdom was established, then the population started to disperse and the kingdom started to shrink."

"At a very early date, Balkh was the rival of Ecbatana, Nineveh and Babylon. There is a long-standing tradition that an ancient shrine of Anahita was to be found here, a temple so rich it invited plunder." 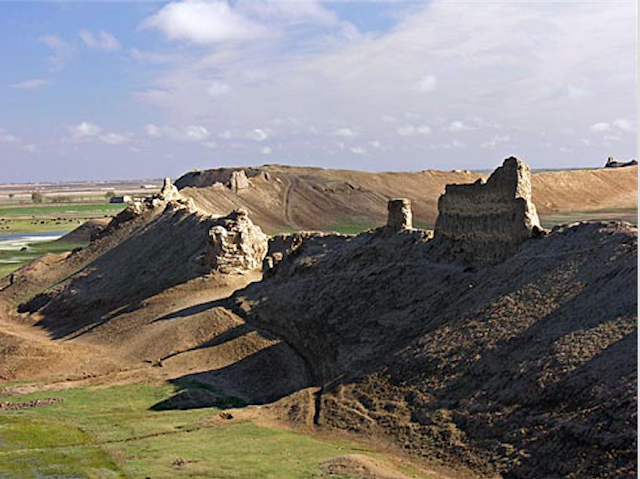 6th Century BC...."Balkh was regarded as the first place where Zoroaster first preached his religion, as well as the place where he died. Zoroastrianism, also called Mazdaism and Magianism, is a religion and philosophy based on the teachings of the prophet Zoroaster (also known as Zarathustra in Avestan) and was formerly among the world's largest religions.

567-486 BC....Shakyamuni Buddha...."The first two disciples of the Buddha were merchants from Balkh. Their stupas are still located in the area....Buddha's first lay disciples.When Trapusa and Bahalika wished his leave to return home, they asked the Buddha for something by which they could remember and honour him in his absence. The Buddha gave them eight of his hairs as relics. They made golden caskets for the relics and took them to their own city (Balkh) where they enshrined them in a stupa by the city gate. Huang Tsang recounts that theirs was the first ever Buddhist Stupa to be made and that the Buddha had first to instruct them how to erect it by folding his three robes into squares piling them up and then topping them off with his inverted bowl.

"It did not take a long time by the Iranian Buddhist converts to build a magnificent temple in Balkh and many of these temples flourished until the 19th century A.D. In a book written by Alexander Polyhistor 80 or 60 years before the birth of Christ he speaks about Buddhism, its relation with Iran and specially Balkh and gives detailed account about Shamans in Balkh...during the first century A.D. Balkh was famous with Buddhism temples and a large number of Iranian citizens in Balkh were followers of that faith and preached and propagated Buddhism.".....The History of Iranian People Before Islam, Abdolhussein Zarrinkub, p. 389. 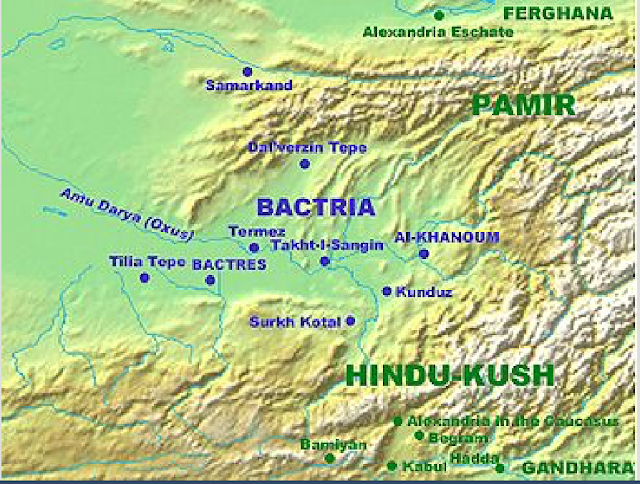 Bactria, also called Bactriana or Zariaspa, ancient country lying between the mountains of the Hindu Kush and the Amu Darya (ancient Oxus River) in what is now part of Afghanistan, Uzbekistan, and Tajikistan. Bactria was especially important between about 600 bc and about ad 600, serving for much of that time as a meeting place not only for overland trade between East and West but also for the crosscurrents of religious and artistic ideas. Bactria’s capital was Bactra, also called Bactra-Zariaspa (modern Balkh, Afghanistan). Bactria was a fertile country, and a profusion of mounds and abandoned water channels

329 BC.....Alexander took Bactria in 329 B.C.E., and made it his base for conquest and amalgamation of the Greek and Iranian civilizations.....Balkh was old long before Alexander’s raid, and its history of 2500 years records more than a score of conquerors. The Arabs, impressed by Balkh’s wealth and antiquity, called it Umm-al-belad, the mother of cities.

129 BC....Bactria reappears with its annexation by the Kushans (129 B.C.E.), whose large and powerful empire stretched from Central Asia deep into India. This was a fortunate era, when the lands through which the caravan routes passed were divided among a few stable states which submerged their differences in the interests of trade; and Balkh flourished at the crossroads as a depot and trans-shipment point for the world’s luxuries. “ From the Roman Empire the caravans brought gold and silver vessels and wine; fom Central Asia and China rubies, furs, aromatic gums, drugs, raw silk and embroidered silks; from India spices, cosmetics, ivory and precious gems of infinite variety” (Dupree, p 71). With the merchants came monks preaching the new religion of Buddhism, and Balkh became a center of worship and learning, famous for its temples and monasteries.

"In 240 AD Mani had a celestial vision.In this revelation he was called upon to perfect the "incomplete" religions of Zarathustra, Buddha and Christ. Mani announced himself as the prophet of a new religion. (Buddha of Light) The Zarathustra priests (Magi) expelled him from Persia. He went to Balkh where he was influuenced by Buddhism. Mani was crucified in Southwest Persia in 276

Notes on The Book of Later Han (5th c. Chinese text), as translated by John E. Hill. "Balkh or Bactria was the ancient capital of the Yuezhi empire in what is now northern Afghanistan. It is one of the oldest cities in the world and some believe the original home of the Indo-Europeans.

642 AD...At the time of the Islamic conquest of Persia in the 7th century, however, Balkh had provided an outpost of resistance and a safe haven for the Persian emperor Yedzgird who fled there from the armies of Umar.

645 AD..."Attracted by grandeur and wealth of Balkh, the Arabs attacked it in 645 AD. It was only in 653 when Arab commander, al-Ahnaf raided the town again and compelled it to pay tribute. The Arab hold over the town, however, remained tenuous. The area was brought under Arabs' control only after it was reconquered by Muawiya in 663 AD. Prof. Upasak describes the effect of this conquest in these words: "The Arabs plundered the town and killed the people indiscriminately. It is said that they raided the famous Buddhist shrine of Nava-Vihara, which the Arab historians call 'Nava Bahara' and describe it as one of the magnificent places which, comprised a range of 360 cells around the high stupas'. They plundered the gems and jewels that were studded on many images and stupas and took away the wealth accumulated in the Vihara but probably did no considerable harm to other monastic buildings or to the monks residing there".

670 AD..."The Arabs' control over Balkh could not last long as it soon came under the rule of a local prince, called Nazak (or Nizak) Tarkhan. He threw out Arabs from his territories in 670 or 671. He was a zealous Buddhist. He is said to have not only reprimanded the Chief-Priest (Barmak) of Nava-Vihara but beheaded him for embracing Islam.

Uyghur from AD 745 to 840 was administered from the imperial capital Ordu-Baliq, one of the biggest ancient cities in Mongolia. During the imperial phase, the term Uyghur (Chinese: 维吾尔; pinyin: Wéiwú'ěr) denoted any citizen of the Uyghur Khaganate, as opposed to the Uyghur tribe. Large numbers of Sogdian refugees from Balkh and Samarkand came to Ordu-Baliq to escape the Islamic conquest of their homeland. They converted the Uyghur nobility from Buddhism to Manichaeism. Thus, the Uyghurs inherited the legacy of Sogdian Culture. Sogdians ran the civil administration of the empire

The Arab geographers Yaqubi and Moqaddasi (9th and 10th centuries) depict Balkh as it was under Samanid rule....A large and prosperous city of mud brick some three square miles in area, it held perhaps 200,000 persons. It was surrounded by mud-brick walls pierced by seven gates. A splendid Friday Mosque occupied the center, and many more mosques were scattered among the dwellings. The fire temple in the suburbs, which Xuanzang had admired when it was a Buddhist monastery, was still noteworthy.

966 AD...". . . the Kala-chakra was introduced into India" - 965 ADMost sources assert that the Kalachakra was brought from Shambhala to India and introduced at Nalanda Monastery in 966 or 967 AD by the mahasiddihi Tsilupa

10th Century....Balkh is described found in the writings of Arabian geographer Ibn Hawqal, an Arabian traveler of the 10th century, who describes Balkh as built of clay, with ramparts and six gates, and extending half a parasang. He also mentions a castle (kala) and a mosque.

1000 AD...Al-Biruni, a Persian scholar and writer in service to the Ghaznavid court, reported that, at the turn of the 2nd millennium, the Buddhist monasteries in Bactria, including Navbahar, were still functioning and decorated with Buddha frescoes. A curious notice of this building is found in the writings of Arabian geographer Ibn Hawqal, an Arabian traveler of the 10th century.

1275 AD....Notwithstanding this, however, Marco Polo (1254-1324) could still describe it as "a noble city and a great seat of learning."...Balkh remained in ruins for a century, and ws so described by Marco Polo (1275) and by Ibn Batuta (1333); and yet revival must have been under way, for Timur (Tamerlane) chose Balkh to proclaim his accession to the throne (1359). Timur and his successors favored Balkh; they restored the walls and endowed the city with quite splendid buildings, some of which survive.

Alexandra David-Neel - who lived 1868-1969 - ( http://www.alexandra-david-neel.org/index_anim.htm ) was french actress, author of several books, a great Tibetan explorer and female Tibetan Lama and more. ...She mentions in her script "Les Nouvelles Littéraires";1954, p.1 ; "that Shamballa is geographically placed near the city of Balkh. It is known as Mother of all Cities. In the olden days the city of Balkh was situated north of the present day city of Balkh. And its name was known as "The Elevated Candle" - and in the persian tounge it was named "Sham-I-Bala" - an expression covering the sanskrit "Shamballa".

Uttamabhadras originally were people of Balkh who had entered India in Vedic times.