"The Great Wall of China was built as a line of defense to protect the country from invaders. The wall was begun in during the Qin dynasty between 221 and 207 B.C. Work continued during the Han dynasty but ceased in A.D. 220, and construction languished for a thousand years. With the threat of Genghis Khan, the project resumed in 1115. During the Ming dynasty (1368 to 1644), the wall was reinforced with stone and brick......Despite the immense building and intimidating size of the wall, it wasn’t enough to keep invaders away. The Mongols were able to ride right through gaps in the wall, and later, the Manchus overtook the Ming dynasty by riding through the gates that traitor Gen. Wu Sangui opened.....Around the same time as the Great Wall construction during the Han dynasty, Zhan Qian opened the Silk Road route to trade with other countries such as India, Persia, Greece and Rome. Routes were extended and trade flourished during the remainder of the Han dynasty."

"The Great Wall of China is a series of fortifications made of stone, brick, tamped earth, wood, and other materials, generally built along an east-to-west line across the historical northern borders of China in part to protect the Chinese Empire or its prototypical states against intrusions by various nomadic groups or military incursions by various warlike peoples or forces. Several walls were being built as early as the 7th century BC; these, later joined together and made bigger, stronger, and unified are now collectively referred to as the Great Wall. Especially famous is the wall built between 220–206 BC by the first Emperor of China, Qin Shi Huang. Little of that wall remains. Since then, the Great Wall has on and off been rebuilt, maintained, and enhanced; the majority of the existing wall was reconstructed during the Ming Dynasty.The Ming Dynasty, also Empire of the Great Ming, was the ruling dynasty of China for 276 years (1368–1644) following the collapse of the Mongol-led Yuan Dynasty. 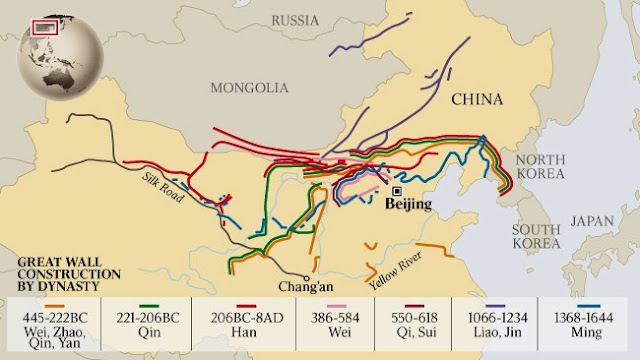 "Gunpowder was invented, documented, and used in China where the Chinese military forces used gunpowder-based weapons technology (i.e. rockets, guns, cannon) and explosives (i.e. grenades and different types of bombs) against the Mongols when the Mongols attempted to invade and breach the Chinese city fortifications on the northern borders of China. After the Mongols conquered China and founded the Yuan Dynasty, they used the Chinese gunpowder-based weapons technology in their invasion of Japan; they also used gunpowder to fuel rockets. 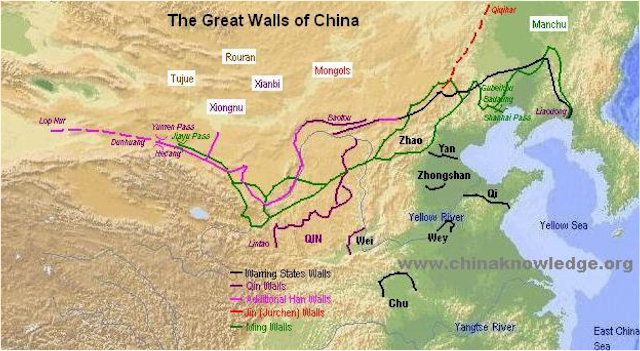 "The Mongols, under Genghis Khan, were successful in taking the Chinese capital and defeating the Chinese Song empire. Under Kublai Khan, grandson of Genghis, the Mongols were successful in conquering the Sung Dynasty in southern China. The Mongols now had complete control over China. With control of China, they would also have had control over Chinese gunpowder research. Successfully conquering all of China was not enough for the Mongol rulers, however. They wanted to expand their empire west into Central Asia. The expansion of the Mongol regime, and the states that they set up, helped to transmit gunpowder west into Central Asia....http://www.monkeytree.org/silkroad/gunpowder/mongol.html

.....".the Polo's, Niccolo, Maffeo, and of course, Marco. These Venetians traveled to Mongol China in the later part of the 1200s. When the Polos arrived in China, they were greeted at the court of Kublai Khan, leader of the Empire of the Great Khan. Their journey is one example of many journeys that Europeans took during this time period. The significance of these trips in the transmission of gunpowder could be significant. The Mongols were very proficient with the techonology of gunpowder. Travelers, like the Polo's, were exposed to many of the marvels of Chinese invention. When they left, they took back many Chinese products. One product that may have returned with them was gunpowder, or a recipe for gunpowder. When they returned to Europe, this recipe would have been spread throughout Europe by word of mouth or in books written by the travelers. This could explain how Roger Bacon knew about gunpowder around this time."

"The Great Wall of Gorgan is a series of ancient defensive fortifications located near Gorgan in the Golestān Province of northeastern Iran, at the southeastern corner of the Caspian Sea. ..It is 195 km (121 mi) long and 6–10 m (20–33 ft) wide, and features over 30 fortresses spaced at intervals of between 10 and 50 km (6.2 and 31.1 mi). It is surpassed only by the Great Wall of China as the longest defensive wall in existence.....Larger than Hadrian's Wall and the Antonine Wall taken together (two separate structures in Britain that marked the northern limits of the Roman Empire), it has been called the greatest monument of its kind between Europe and China. The wall is second only to the combined walls that make up the Great Wall of China as the longest defensive wall in existence, and although now in substantial disrepair, it was perhaps even more solidly built than the early forms of the Great Wall.....Dr. Kiani, who led the archaeological team in 1971, believed that the wall was built during the Parthian Empire (247 BCE–224 CE), and that it was restored during the Sassanid era (3rd to 7th century AD).