Archaeology of the Balkh Region 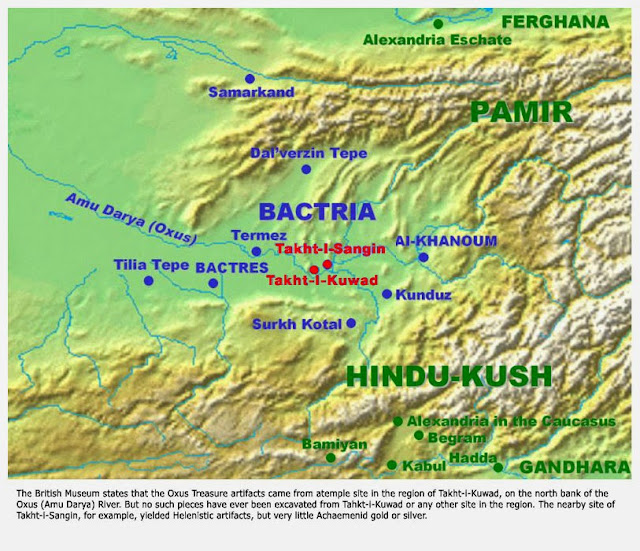 "The ruins of Balkh are situated some 12 km from the right bank of the seasonally flowing Balkh River, at an elevation of about 365 m (1,200 ft). .......Though Marco Polo still called Balkh “a great and noble city” after the Genghis Khan attack, the area continued to be brutalized and fought over until the 1870s, when a malaria outbreak caused government to shift the regional capital to Mazar-e-Sharif........Since then, Balkh has lay largely in ruins, with professional archaeologists generally unable to properly excavate the site. Although efforts have been made by organizations such as the Society for the Preservation of Afghanistan’s Cultural Heritage (SPACH) to maintain some of the existing structures, governing bodies in Afghanistan have shown little willingness to protect the site, and as such, historic remains like the No Gumbad Mosque, one of the oldest Islam monuments, as well as the spectacular Khwaja Abu Nasr Parsa Shrine, have fallen victim to Balkh’s modern plague: looting.......Like so many of the war-conflicted areas that surround it, Balkh has been pillaged over the past few decades by looters who seek out ancient statues, pottery, and coins to sell on the black market. One mound in particular, known as Jewelry Hill, which legend says was the site of a jewelry bazaar 1,400 years ago, is today scarred with hundreds of deep holes and shards of broken artifacts. There is simply not enough policing or repercussions to prevent looting in regions like Balkh, where government must concern itself with far graver crimes and conflicts.........Sadly, for Balkh, its treasures are on the verge of disappearing forever into the black market, where their true cultural value will never be properly appreciated."....http://globalheritagefund.org/onthewire/blog/balkh_afghanistan

At Jeitun (or Djeitun) mudbrick houses were first occupied c. 6000 BC.

"The westward movement of the western group of Aryans by the 18th century B.C.E. It is postulated that they migrated westward in the role of mercenaries, as the term Marianni - an Aryan word meaning warriors - can be observed in Egyptian and Hittite texts classifying them as a ruling military class; and documents from the 16th century B.C.E. in Mesapotamia and Syria disclose Iranian names. Morever, the dynasty of the Mitanni kingdom, situated in northern Mesapotamia, can be proved to have Aryan origins by the names of its kings (Artatama, Shutarna, Artasumara, Dushratta) and in a treaty betwixt the Mitanni and Hittites dating to the 15th century B.C.E. the gods Mitra and Varuna, Indra and the Nasatyas are invoked by the former. For the study of Mithraism, this data is vital, as it is one of the earliest recordings concerning the god Mithra, and it clearly indicates his Aryan origin: Mitra (later to be transformed into Mithra) being the Sanskrit counterpart of the Old Persian Mihr (meaning: friend or contract) both derived from the Iranian (Aryan) root Mei meaning "exchange."

In the Early Bronze Age the culture of the Kopet Dag oases and Altyn-Depe developed a proto-urban society. This corresponds to level IV at Namazga-Depe. Altyn-Depe was a major centre even then. Pottery was wheel-turned. Grapes were grown. The height of this urban development was reached in the Middle Bronze Age c. 2300 BCE, corresponding to level V at Namazga-Depe.[5] It is this Bronze Age culture which has been given the BMAC name.,,,Altyndepe (Алтын-Депе, the Turkmen for "Golden Hill") is a Bronze Age (BMAC) site in Turkmenistan, near Aşgabat, inhabited in the 3rd to 2nd millennia BC, abandoned around 1600 BC.....Models of two-wheeled carts from c. 3000 BC found at Altyn-Depe are the earliest complete evidence of wheeled transport in Central Asia...

Kostenki....The dream of every archaeologist, who is involved in the Gravettian studies, is to discover and explore such a site as Kostenki on the Don River. The Kostenkian, Kostenki-Avdeevo and Kostenki-Streletskaya cultures are the examples of the cultures of the eastern European Gravettian.

ANAU....."We've been looking at some of these large desert oasis sites in part of the Kara Kum Desert of Turkmenistan which cover an area of 100 miles long by some 50 miles wide. This is an area that is simply dotted with archaeological sites. We call this an 'ancient oasis.' It would have been an area watered in the past with irrigation canals and would have been a lush agricultural oasis where farming would have produced an abundance of wheat and barley. Today it's sandy. The sites are almost gone. It takes excavation to reveal the plans of these buildings. Once the buildings are excavated, we see they are unlike any other area that we have previously worked in Mesopotamia or Iran. These buildings tend to be in the 300 to 500 foot length on each side, often having many series of walls that enclose them surrounded by the fields, the agricultural fields. It's almost like a building complex with dozens and dozens of rooms inside them. Quite unusual and apparently quite an organized society."...Fredrik Talmage Hiebert, Ph.D., Prof. of Anthropology, Univ. of Pennsylvania Museum of Archaeology and Anthropology and Assistant Curator of Near Eastern Archaeology, Philadelphpia, Pennsylvania

"The tale of the famous Chinese pilgrim, Xuanzang (translated by Paul Pelliot) who visited Bamiyan in 632 tells of the existence of resplendent giant Buddha statues and a city surrounded by ramparts like the capital of a kingdom (which the Mission calls Z.Tarzi, the “Royal City” or, in French “Ville Royale” = VR) partly backing up against the mountain on the north side. He also tells of several dozen monasteries, one of which housed a one-thousand foot long Buddha lying in a state of parinirvana."......http://www.apaa.info/APAA/Archaeology.html.....The APAA, Association for the Protection of Afghan Archaeology, was founded by Nadia Tarzi in December of 2002 in the State of California, U.S.A.

"The looting of the Archaeological Heritage of Afghanistan does not limit itself to these few sites proposed by Mr. Feroozi. One should also mention the sites of the regions of Herat, Maymana, Balkh, Samangan, Qunduz, Bakhshan, Takhar; the mountainous regions of the center of Afghanistan such as Bamiyan,Yakaoling, further south, Panjshir, Kohestan (especially Khom e- Zargar), Kapissa, Begram, Kabul, Jalriz, Maydan Shahr, Kandahar, Helmand, Seistan. And let us not forget the Eastern regions such as Jalalabad (especially Hadda for its beautiful Buddhist monasteries, excavated by the French and Afghans, Dr. Chaibai Mustamandy and Dr. Zemaryalai Tarzi), Kunar, Laghman (especially Khoguiani), Patchir, and Agam, etc......http://www.cemml.colostate.edu/cultural/09476/afgh08-01enl.html