"Ahura Mazda (also known as Ohrmazd, Ahuramazda, Hourmazd, Hormazd, and Hurmuz, Lord or simply as spirit) is the Avestan name for a higher divine spirit of the old Iranian religion (predating Islam) who was proclaimed as the uncreated spirit by Zoroaster, the founder of Zoroastrianism. Ahura Mazda is described as the highest spirit of worship in Zoroastrianism, along with being the first and most frequently invoked spirit in the Yasna. The literal meaning of the word Ahura is light and Mazda is wisdom."

The word Ahura means light and Mazda means wisdom. Thus Ahura Mazda is the lord of light and wisdom....Avestan ahura derives from Indo-Iranian *asura, also attested in an Indian context as RigVedic asura. As suggested by the similarity to the Old Norse æsir, Indo-Iranian *asura may have an even earlier Indo-European root. 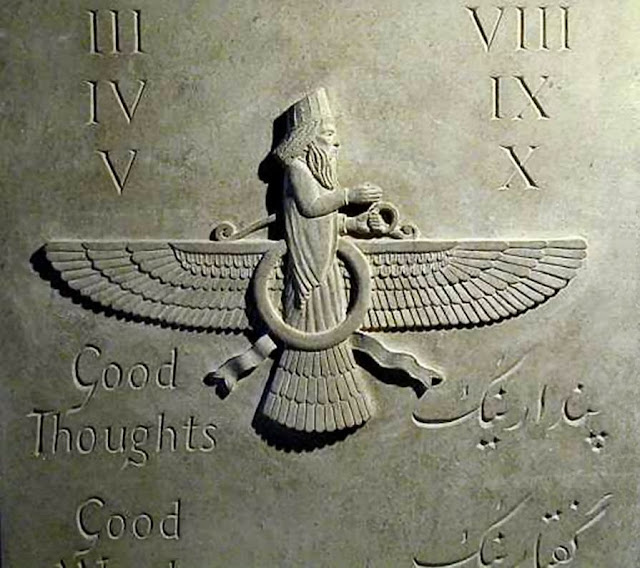 "The Rigden Kings of Shambhala other than Rigden Raudrachakrin are of the Asura family because of bestowing fear.....Palden Raudrachakrin having a short spear bestows fear in the asura family.(Mipham)... "http://www.scribd.com/doc/99775539/Mipham-on-Kalachakra

"Pandemonium" is Jaan Puhvel's word for the mutual demonization that occurred when the Younger-Avesta demonized the daevas, and the post-Rigvedic texts demonized the asuras. Neither demonization occurs in the oldest texts: in the Rigveda, there is not yet any hard-and-fast distinction between asuras and dēvas, and even in the later Vedas, the two groups (though thematically in opposition) cooperate at certain times. In the Old Avestan texts the daevas are to be rejected for being misguided by the "lie", but they are still gods, and not demons.....http://en.wikipedia.org/wiki/Proto-Indo-European_religion

"Mazda", or rather the Avestan stem-form Mazdā-, nominative Mazdå, reflects Proto-Iranian Mazdāh (female). It is generally taken to be the proper name of the God, and like its Sanskrit cognate medhā, means "intelligence" or "wisdom". Both the Avestan and Sanskrit words reflect Proto-Indo-Iranian mazdhā-, from Proto-Indo-European mn̩sdʰeh, literally meaning "placing (dʰeh) one's mind (mn̩-s)", hence "wise".

"Ahura" was originally an adjective meaning ahuric, characterizing a specific Indo-Iranian entity named ASURA. Although traces of this figure are still evident in the oldest texts of both India and Iran, in both cultures the word eventually appears as the epithet of other divinities.

"Avestan ahura derives from Indo-Iranian asura, also attested in an Indian context as RigVedic asura. As suggested by the similarity to the Old Norse æsir, Indo-Iranian asura may have an even earlier Indo-European root.....It is commonly supposed that Indo-Iranian Asura was the proper name of a specific divinity, with whom other divinities were then identified.....For not altogether obvious reasons, the Oxford English Dictionary lists asura, rather than ahura, as a Zoroastrian term.

"Ahura Mazda (/əhˌʊrəmˈæzdə/; Persian: اهورا مزدا; Ahura Mazdā), (also known as Athura Mazda, Athuramazda, Aramazd, Ohrmazd, Ahuramazda, Hourmazd, Hormazd, Hurmuz, and Azzandara) is the Avestan name for a divinity of the Old Iranian religion who was proclaimed the uncreated God by Zoroaster, the founder of Zoroastrianism. Ahura Mazda is described as the highest deity of worship in Zoroastrianism, along with being the first and most frequently invoked deity in the Yasna. The word Ahura means light and Mazda means wisdom. Thus Ahura Mazda is the lord of light and wisdom.

"In the Gathas, the oldest hymns of Zoroastrianism and thought to have been composed by Zoroaster himself (between the 18th and the 6th centuries BC), the poet exhorts his followers to pay reverence to only the ahuras, and to rebuff the daevas and others who act "at Lie's command". 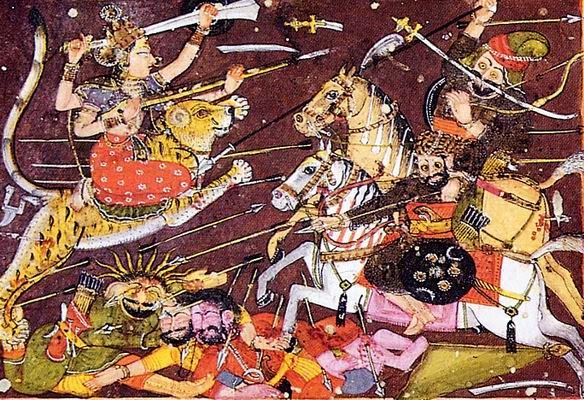 Battles between the devas and asuras. The cosmic wars between the deities were symbolic of the earthly wars between the two groups.....three primary pre-Zoroastrian Aryan religions mentioned in our source texts: Mazda worship, Daeva or Deva worship and Asura worship.".....http://www.heritageinstitute.com/zoroastrianism/aryans/religion.htm

"In Hinduism, the Asuras (Sanskrit: असुर) are non-suras, a different group of power-seeking deities besides the suras, sometimes considered naturalists, or nature-beings....The Daityas and Danavas together were later used for the term Asuras. As time passed, the vedic Asuras began to be referred as the lesser beings while in Avestha, the Persian counterpart of the Vedas, the devas began to be considered as lesser beings. The Asura were opposed to the Devas....in the earliest text, the Rigveda, the Asura preside over moral and social phenomena. Among the Asura are Varuna, the guardian of Ṛtá, and Aryaman, the patron of marriages. Conversely, the Devas preside over natural phenomena. Among the Devas are the Ushas, whose name means "dawn", and Indra, the leader of the Devas. However, by the time that the Brahmana texts were written, the character of the Asura had become negative....In later texts, such as the Puranas and the Itihasas, the Devas are the good beings, and the Asura are the bad ones.

"The Sanskrit deva- derives from Indo-Iranian dev- which in turn descends from the Proto-Indo-European (PIE) word, deiwos, originally an adjective meaning "celestial" or "shining", which is a PIE (not synchronic Sanskrit) vrddhi derivative from the root diw meaning "to shine", especially as the day-lit sky. The feminine form of PIE deiwos is PIE deiwih2, which descends into Indic languages as devi, in that context meaning "female deity"......Also deriving from PIE deiwos, and thus cognates of deva, are Lithuanian Dievas (Latvian Dievs, Prussian Deiwas), Germanic Tiwaz (seen in English "Tuesday") and the related Old Norse Tivar (gods), and Latin deus "god" and divus "divine", from which the English words "divine", "deity", French "dieu", Portuguese "deus", Spanish "dios" and Italian "dio", also "Zeys/Ζεύς" - "Dias/Δίας", the Greek father of the gods, are derived.

"The Parsi religion is popularly called Zoroastrian after the Greek version of the name of the prophet Zarathushtra (zarat, like Sanskrit harit, golden; ushtra, Sanskrit or Old Persian for camel) who has been variously estimated to have lived either around the time 1200 BC or perhaps half a millennium later. A Greek tradition assigns him to an age 258 years prior to Alexander, that is the 6th century BC. (Ernst Herzfeld in his Zoroaster and His World has argued for the later date in contrast to the earlier date by Mary Boyce in her History of Zoroastrianism. In my judgment, Herzfeld's arguments are stronger.) The name by which the Zoroastrians call their own religion is Mazdayasna, the religion of Ahura Mazda (Sanskrit medha, wisdom). The Rigveda 8.6.10 has the expression medhaam ritasya, "wisdom of truth."....Zarathushtra presented his religion as rival to the religion of the daevas, that is Daevayasna. Zarathushtra came from Bactria in northeast Iran, near Afghanistan. The Avesta speaks of several lands that include the Sapta-Sindhu (that is the Sindhu-Sarasvati region). The scripture of the Zoroastrians is the Avesta. It includes the Yasna (Sanskrit Yajna) with the Gathas of Zarathushtra, Videvdat or Vendidad (Vi-daeva-dat, anti-Daeva), and Yasht (Sanskrit Yajat, worship), which are hymns for worship. During the Sasanian period the Avesta was translated into Pahlavi and this version is called Zend Avesta.......It has been assumed for some time that the daevas of the Mazda faith are the same as the Vedic devas and therefore Zarathushtra inverted the deva-asura dichotomy of the Vedic period. In reality, the situation is more complex and the Vedic and the Zarathushtrian systems are much less different than is generally supposed.......From Kashmir, which belongs square within the Vedic world, comes crucial evidence regarding a three-way division consisting of devas, asuras, and daevas. The scheme reflects the three fundamental gunas of Indian thought: sattva, rajas, and tamas....
Deva, or devata (sattva): power related to understanding
Asura (rajas): power related to activity
Daeva (tamas): power related to acquisitiveness
Kashmiri folklore is full of tales where daevas are counterpoints to devas and asuras. Sometimes the term rakshasa is used as a synonym for daeva. This term rakshasa occurs very frequently in Sanskrit literature. The word rakshas appears in the Rigveda, the Aitareya Brahmana and it is also considered equivalent to Nirriti. The rakshasa form of marriage is the violent seizure or rape of a girl after the defeat or destruction of her relatives.......It is entirely possible that the term daeva came into Kashmir late as a result of the immigration of Persians. It is equally possible that the term has been current in Kashmir from ancient times and its usage there parallels that by Zarathushtra from the nearby Bactria"......http://www.veda.harekrsna.cz/connections/Vedic-Iran.php

..."7 He, strong of wing, hath lightened up the regions, deep-quivering Asura, the gentle Leader. Where now is Sūrya, where is one to tell us to what celestial sphere his ray hath wandered? 8 The earth's eight points his brightness hath illumined, three desert regions and the Seven Rivers. God Savitar the gold-eyed hath come hither, giving choice treasures unto him who worships. 9 The golden-handed Savitar, far-seeing, goes on his way between the earth and heaven, Drives away sickness, bids the Sun approach us, and spreads the bright sky through the darksome region. 10 May he, gold-handed Asura, kind Leader, come hither to us with his help and favour. Driving off Rākṣasas and Yātudhānas, the God is present, praised in hymns at evening. 11 O Savitar, thine ancient dustless pathways are well established in the air's mid-region..."....http://www.sacred-texts.com/hin/rigveda/rv01035.htm 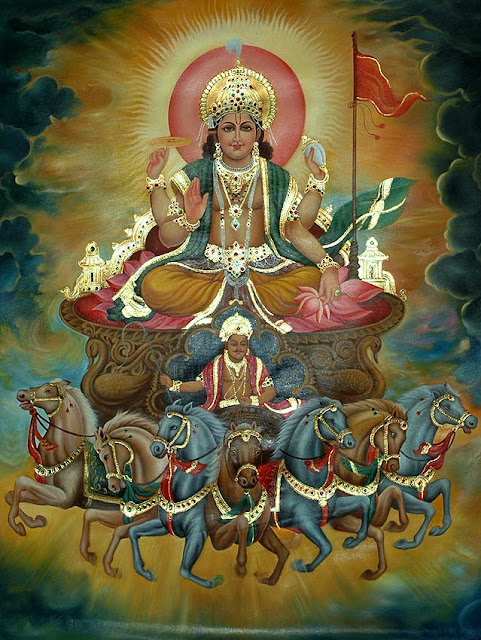 Surya, the deity representing the sun. In classic depiction he rides resplendent across the heavens in a horse-drawn chariot, appearing at dawn, the embodiment of will-power, vitality and courage.