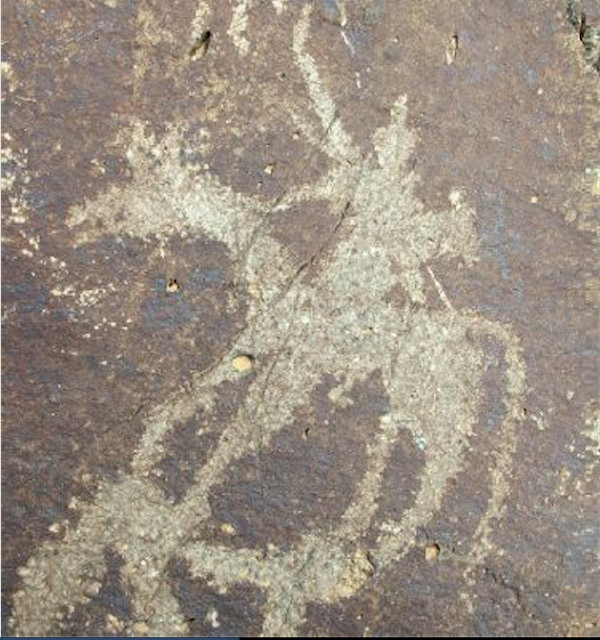 Before the Mural and Scroll Painting: Rock Art in Ancient Tibet.....John Vincent Bellezza

Petroglyphs in the National Park Gobustan in Azerbaijan. These ancient rock carvings date back to 10,000 BC and they indicate a thriving culture. It is a UNESCO World Heritage Site considered to be of "outstanding universal value". 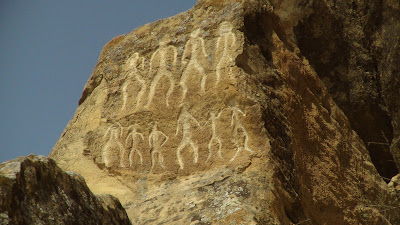 KHYUNG........The rock art record of Upper Tibet confirms that horned and crested raptors did indeed play a cultural role in prehistory. While the specifics of individual narratives cannot be verified, this archaeological evidence independently corroborates the historicity of the Bon textual tradition. The existence of horned raptors (probably eagles) in rock art right across Upper Tibet in antiquity encourages us to take the functions and significance assigned them in Bon literature seriously. 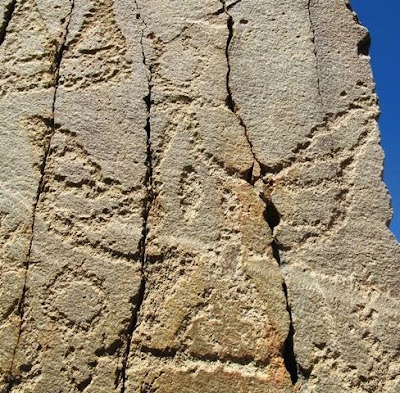 Above....Far western Tibet. This style of khyung was retained well into the historic period as part of the class of copper alloy talismans known as thokchas (thog-lcags).... This style of rock art and its physical characteristics (wear, carving technique and repatination) can probably be attributed to the protohistoric period (100 BCE to 650 CE).....http://www.tibetarchaeology.com/january-2012/ 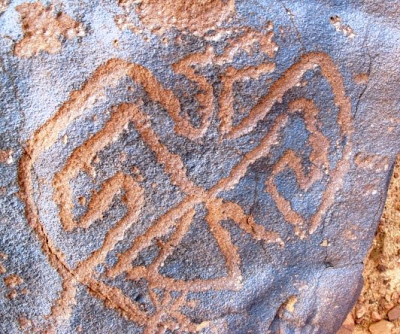 Above...khyung is found at a site with much early rock art. It appears to date to Iron Age (700–100 CE). As in figure 1, the two horns of the bird are clearly represented. Of special note is the treatment of the wings, which gracefully but powerfully fold inwards.....http://www.tibetarchaeology.com/january-2012/ 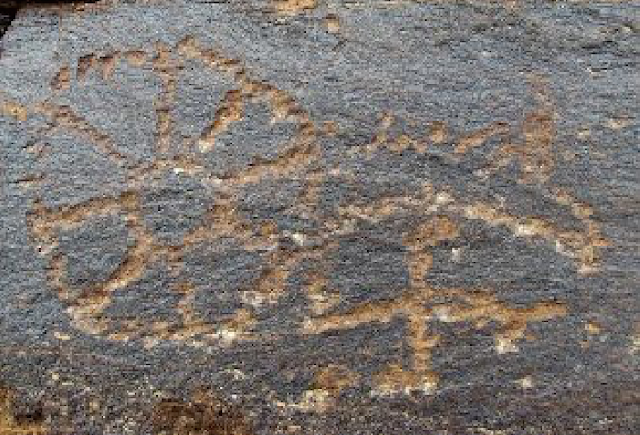 Pictographs (John Vincent Bellezza) .....Before the Mural and Scroll Painting: Rock Art in Ancient Tibet....Bronze Age or Iron Age. In addition to the swastika, the sun and moon figure prominently in the symbolic rock art of Upper Tibet. In Buddhist and Bon art the sun often cradles a crescent moon, signifying the union of the methods and wisdom that lead to enlightenment. In more ancient rock art the sun and moon usually appear separately on stone surfaces. In this composition the two of them were carved in conjunction with a swastika. The sun with its spokes and hub resembles a chariot wheel. At this particular rock art site there are numerous petroglyphs of chariots with similar wheels, providing us with an indication of its antiquity. In the historic epoch Tibetans did not regularly use wheeled vehicles for transport.

"In the early 1900s, Europe was discussing ancient petroglyphs – writings found by famous Russian poet Nikolai Gumilyov on the rocks of Karelia.......Considered among the most complex and expressive examples of rock art in northern Europe, the petroglyphs of the Karelian Republic include elaborate scenes of warfare, religious ritual, seafaring, and even skiing, carved into the red granite of the White Sea coast, and enigmatic and fantastic figures incised in rock on the shores of Lake Onega, 325 kilometers to the south. More than 70 ancient settlements have been identified in association with the White Sea carvings. Collectively, they constitute the largest Neolithic site in the region. While comparable petroglyph sites are known in Norway and Sweden, the Karelian petroglyphs are the only major rock art sites associated with the Ugro-Finnic peoples....."...http://www.wmf.org/project/karelian-petroglyphs 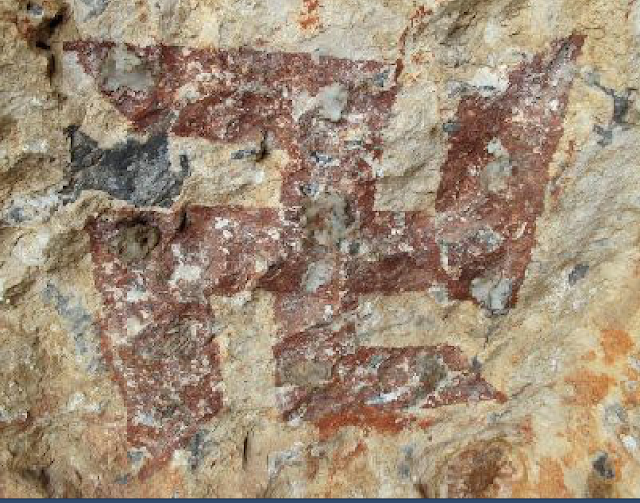 Pictographs (John Vincent Bellezza) .....Before the Mural and Scroll Painting: Rock Art in Ancient Tibet.... The counterclockwise swastika is the symbol of the Bon religion par excellence, but its origins as a rock art motif go back to prehistory. On the other hand, Tibetan Buddhists use the clockwise swastika, setting them apart from the Bonpo in an easily recognizable way. The swastika depicted here was painted in red ochre (oxides of iron), the most common pigment used in Tibetan rock art. According to David and Janice Jackson (see bibliography), red ochre (tsak) was also utilized by painters of early thangkas.

"Xiongnu images of animal predation, specifically tiger plus prey, is spiritual, representative of death and rebirth, and same-animal combat is representative of the acquisition of or maintenance of power......The rock art of the Yinshan and Helanshan is dated from the 9th millennium BC to 19th century. It consists mainly of engraved signs (petroglyphs) and only minimally of painted images.".....Excavations conducted between 1924–1925, in Noin-Ula kurgans located in Selenga River in the northern Mongolian hills north of Ulan Bator, produced objects with over twenty carved characters, which were either identical or very similar to that of to the runic letters of the Turkic Orkhon script discovered in the Orkhon Valley. From this a some scholars hold that the Xiongnu had a script similar to Eurasian runiform and this alphabet itself served as the basis for the ancient Turkic writing."....http://en.wikipedia.org/wiki/Xiongnu

"There are more than 50,000 pieces of rock art (petroglyphs) and inscriptions all along the Karakoram Highway in Gilgit–Baltistan, concentrated at ten major sites between Hunza and Shatial. The carvings were left by various invaders, traders, and pilgrims who passed along the trade route, as well as by locals. The earliest date back to between 5000 and 1000 BCE, showing single animals, triangular men and hunting scenes in which the animals are larger than the hunters. These carvings were pecked into the rock with stone tools and are covered with a thick patina that proves their age. The ethnologist Karl Jettmar has pieced together the history of the area from various inscriptions and recorded his findings in Rock Carvings and Inscriptions in the Northern Areas of Pakistan and the later released Between Gandhara and the Silk Roads - Rock Carvings Along the Karakoram Highway. Many of these carvings and inscriptions will be inundated and/or destroyed when the planned Basha-Diamir dam is built and the Karakoram Highway is widened."......http://en.wikipedia.org/wiki/Gilgit-Baltistan

"Cave paintings are paintings found on cave walls and ceilings, and especially refer to those of prehistoric origin. The earliest such art in Europe dates back to the Aurignacian period, approximately 40,000 years ago, and is found in the El Castillo cave in Cantabria, Spain. ......Lascaux (Lascaux Caves) is the setting of a complex of caves in southwestern France famous for its Paleolithic cave paintings. The original caves are located near the village of Montignac, in the department of Dordogne. They contain some of the best-known Upper Paleolithic art. These paintings are estimated to be 17,300 years old."......http://en.wikipedia.org/wiki/Cave_painting

"Tibet produced a huge array of religious paintings and sculptures over a long span of time. Buddhist and Bon murals and statuary can be traced back to the 7th century CE, while the oldest painted scrolls or thangkas date to the 10th or 11th century CE. As in many other parts of the world, the classical religious art of Tibet.....rock art is the historic forerunner of Tibetan Buddhist and Bon painting,....While Tibetan mural and thangka paintings are generally more complex than rock art, petroglyphs and pictographs containing upwards of 100 individual subjects are known."....Pictographs (John Vincent Bellezza)