9th Way of Bon..... Lamed Thegpa (bLa-med theg-pa), the Unsurpassed Way, is concerned with the highest attainment through the path of Great Perfection (i.e., rDzogs-chen).

Tibetan bla-ma, the upper one, lama, from bla, superior.....

"the word La is similar in meaning to the word 'soul'. All human beings possess a la, consciousness (sem) and life (sok). The la is an entity which is part of one's being but is unintelligent. Therefore it can be stolen, confiscated, regained, as well as reinforced by spiritual power." (Trungpa: 1978..pg 227)....

IX. The Supreme Way (bla-med theg-pa) (pp. 226-55).......In this section a description is given of the Absolute; the Way is described as the mind in its absolute state, as pure ‘Thought of Enlightenment’........The Nine Ways of Bon, a collection of texts in Tibetan published in 1967 by the Oxford University Press of London, edited by Prof. David L. Snellgrove, an eminent tibetologist, in collaboration with three Bon monks - Löpon (slob-dpon) Tenzin Namdak, Geshey Sangye Tenzin Jongdong and Geshey Samten Gyaltsen Karmay. 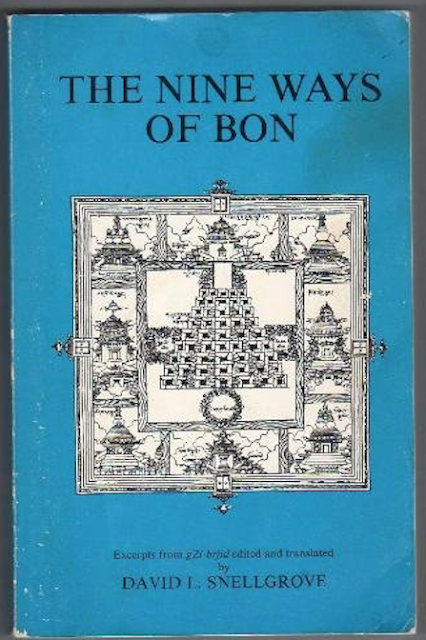 IX. THE SUPREME WAY (bla-med theg-pa).......This describes the absolute, referred to as the 'basis' ( gzi corresponding to Sanskrit alaya) , from which 'release' and'delusion' are both derived. 'Release' is interpreted as the state of fivefold buddhahood, and 'delusion' as the false conceptions of erring beings in the 'Intermediate State' ( bar-do ). 'The Way' is then described as mind in its absolute state, as the pure 'Thought of Enlightenment'. The 'Fruit' or final effect is then finally described in terms of the special powers of the perfected sage. The whole subject-matter is then resumed under the four conventioanl headings of insight, contemplation , practice and achievment. ......The categories and ideas elaborated in this IXth Vehicle are usually referred to as the teachings of the 'Great Perfection' ( rdzog-chen )..... from "The Nine Ways of Bon: Excerpts from Gzi-brjid". Edited and Translated by D.L. Snellgrove, pp.1-23 London Oriental Series , Vol 18, Oxford University Press 1968.

"But Bon practices are not limited to ceremonies and ritUals only. There are higher-level teachings of a very esoteric natUre, in both Tantra (Sang Ngag) and the Great Perfection (Dzogchen). Sang Ngag includes visualization and generation (kyerim) and perfection (zogrim) stages and the practices of channels (tsa), wind (lung), and physical exercise (trulkhor) as gradual practices on the wheels or chakras (khorlo), energy points in the body. The most secret Bon practice is Dzogchen, the great perfection. All of these traditions are still preserved and practiced today.

"Lastly, the ninth swastika represents Lamed thegpa (the Unsurpassed Way) which is concerned with the highest attainment through the path of Great Perfection.

"Thegpa: yana, vehicle, cart, carriage, conveyance, any vehicle for transit, spiritual pursuits, career, approach to the teaching, way of life, path of spiritual training, support, lift, raise, hold up, endure, be able, to carry, method of doctrinal religion and conduct, doctrine in overt action, practice of any doctrine, conduct,


"bLa energy is our life force, our chi, our vital "juice", what keeps us balanced and functioning. A pure and protective energy with the five elements of which we and the universe we live in, consist of........It moves around the body on a 30 day lunar cycle, being found in a different place on every day of that cycle. The study of bLa energy and its functions are a direct result of the strong relationship between the two sciences of Tibetan Medicine and Tibetan Astrology. 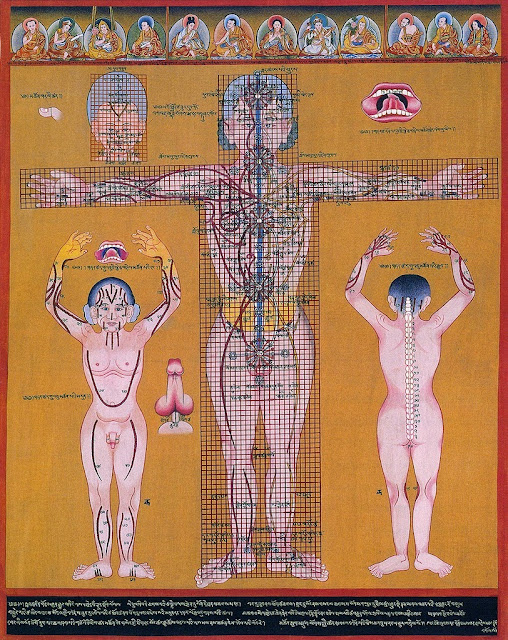 "The bla is conceived of as a support upon which the physiological and intellectual aspects of life rest. It is thus considered the most important of the three physiological principlles, the other two being vital force (srog) and breath (dbugs)......the bla pervades all parts of the body, but depends on the breath and cannot function without it.......bla is also one of the three intellectual principles along with sems and yid.".....ARROW AND SPINDLE...pg. 311)

"In terms of the Nine Ways of Bon, the Tsewang Rikzin practice belongs to the tantric vehicle of transformation while the ransom sections belong to a lower causal vehicle known as ‘Rites and Rituals’. Before one performs the ritual of reinforcing the life force (chi bslu) and retrieving the soul (bla bslu) for the benefit of an individual whose life is threatened or whose health is suffering, the practitioners should gather and proceed through the recitation and visualization sections of the sadhana.

"The Ngakpa, on the other hand, as a Tantrika and an exorcist, is rarely possessed by the spirits. Rather, the Ngakpa is able, by way of certain meditations and other psychic techniques, to enter into an altered state where one's consciousness or Namshe leaves the physical body in a subtle mind-made body (yid-lus) and enters into the dimensions of the Otherworld, where one searches for fragments of the soul of the afflicted person which has been stolen by deceitful spirits or imprisoned there by a black magician. A patient suffering from soul-sickness or loss of soul is characterized by inertia, weakness, depression, and loss of interest in one's surroundings and everyday affairs. If the La (bla) or the soul, this being a subtle energy field that serves as the vehicle for the individual's emotional life, is not recovered and restored to wholeness in the patient within a sufficient period of months, there exists the possibility of physical death. The Ngagpa may also perform a ritual procedure for this purpose known as La-guk (bla 'gug), "recalling the soul". The Ngakpa, by virtue of his power to enter the Otherworld and return with treasures of knowledge and power, is able to diagnose the causes of diseases and prescribe a variety of methods for effecting cures."

"....bLA...life force....concerned with this world's good fortune, tather than rebirth and salvation.....the la is a spirit-essence or life-principle, residing in the body...it Tibet it is customary to plant a tree at the firth of a child..this tree is the la-shing, the tree of the child's la.......usually a Juniper.....The la can leave the body, weakening one;s life and exposing one to harm....it can also be affected by damaging its external resting place......

"...There seems to be many points of similarity between the LA of the Tibetans, the HUN (soul) of the Chinese, and the KA or double of the Egyptians...

"Bon has three principal streams of transmission of Dzogchen, and of these three the Aural Transmission of Zhang Zhung is considered to be the most profound. Drugyalwa Yungdrung wrote a practice manual for this system, and for over seven hundred years this has been the primary source of instruction on the practice of this system. Drugyalwa’s practice manual is quite extensive and contains instruction on preliminaries, actual practices of sky-gazing, sun-gazing and dark retreat, as well as four auxiliary sections which provide deeper instruction on view, meditation, action, and the result. This system culminates in the practice of the 49 day dark retreat, and a detailed instruction manual exists for those practices as well. It has been a rare opportunity to receive any of these teachings in either the east or the west and usually the instruction has been very abbreviated. Fortunately, Chaphur Rinpoche has agreed to carefully guide students through each of the sections of practice. Having taught the preliminaries, Chaphur Rinpoche now continues with instruction on the actual practices of the Aural Transmission of Zhang Zhung.".....http://gyalshen.org/the-practice-manual-chaktri-of-the-aural-transmission-of-zhang-zhung/