"Sherab Chamma (Anahita) is a meditational divinity and a protector … she roots out “the three poisons of greed, anger and delusion” (Aryan beliefs were based on shedding negativity or falsehoods or lies – that is, in abstract format, and not imagined angels & demons as interpreted and adopted later by Semitic views in the Judeo-Christian-Islamic trilogy) … flames of fire representing wisdom surround the goddess (hence, ancient Iranians revered fire as a tool in seeing the Truth … they were not fire-worshipers as often misrepresented again by the Semitic point of view to a point that even some modern Iranians converted to a Semitic belief generations ago think their ancestors worshiped the element of fire!!!)… ".....The Official Site of Sheda Vasseghi May 5, 2013

"Atari..... (Avestan ātar) is the Zoroastrian concept of holy fire, sometimes described in abstract terms as "burning and unburning fire" or "visible and invisible fire".....In the Avestan language, ātar is an attribute of sources of heat and light, of which the nominative singular form is ātarš, source of Persian āteš (fire). It was once thought to be etymologically related to the Avestan āθrauuan / aθaurun (Vedic atharvan), a type of priest, but that is now considered unlikely (Boyce, 2002:16). The ultimate etymology of ātar, previously unknown (Boyce, 2002:1), is now believed to be from the Indo-European *hxehxtr- 'fire'. This would make it related to the Latin ater (black) and either a loan source or cognate of the Serbian ватра / vatra (fire) (also of the Romanian vatră (hearth, home, fireplace), of possible Dacian or Paleo-Balkanic origin), which sets Serbian apart from other Slavonic languages, e.g. Russian (огонь = "fire"; Serbian also has огањ - "fire", but it is mostly poetic). The yazata Atar may not be of Indo-Iranian origin (Dhalla 1938:174).".....In later Zoroastrianism, ātar (in middle Persian: ādar or ādur) is iconographically conflated with fire itself, which in middle Persian is ātaxsh, one of the primary objects of Zoroastrian symbolism." "Zariaspa, which is either an alternate name for Balkh or a term for part of the city, may derive from the important Zoroastrian fire temple Azar-i-Asp...... The period between 26th and 20th century BC was the most important period in the history of Balkh; it's in this relatively short period that a kingdom was established, then the population started to disperse and the kingdom started to shrink until the Median and Persian empires in 700 BC, around 1000 years later.".....The Greeks in Bactria and India. William Woodthorpe Tarn. 1938.

"The Bundahishn, a Zoroastrian view of creation finished in the 11th or 12th century AD, states that the Great Fires had existed since creation.....the Great Fires were also symbols of imperial sovereignty......these three "Royal Fires" are said to have mirrored social and feudal divisions: "The fire which is Farnbag has made its place among the priests; ... the fire which is Gūshnasp has made its place among the warriors; ... the fire which is Būrzīn-Mitrō has made its place among agriculturists" (Denkard, 6.293). These divisions, from an archaeological point of view, are most revealing, since from at least the 1st century BCE onwards, society was divided into four, not three, feudal estates....The Farnbag fire (translated as 'the fire Glory-Given' by Darmesteter) was considered the most venerated of the three because it was seen as the earthly representative of the Atar Spenishta, 'Holiest Fire' of Yasna 17.11 and described in a Zend commentary on that verse as "the one burning in Paradise in the presence of Ohrmazd....The location of the Mithra fire, i.e. that of Burzen-Mihr, Jackson "identified with reasonable certainty" at being near the village of Mihr half-way between Miandasht and Sabzevar on the Khorasan road to Nishapur (Jackson, 1921:82)."...http://en.wikipedia.org/wiki/Fire_temple

"The Arab geographers Yaqubi and Moqaddasi (9th and 10th centuries) depict Balkh as it was under Samanid rule, whe Bukhara was the center of power. A large and prosperous city of mud brick some three square miles in area, it held perhaps 200,000 persons. It was surrounded by mud-brick walls pierced by seven gates. A splendid Friday Mosque occupied the center, and many more mosques were scattered among the dwellings. The fire temple in the suburbs, which Xuanzang had admired when it was a Buddhist monastery, was still noteworthy."

"The Vedic mode of worship (1500- 500 BC) was worship of the elements like fire and rivers, and the worship of heroic gods....Specific rituals and sacrifices of the Vedic religion include, among others:
The Soma rituals, which involved the extraction, utility and consumption of Soma....the Agnistoma or Soma sacrifice
Fire rituals involving oblations (hair): the Agnihotra or oblation to Agni, a sun charm.....the Agnicayana, the sophisticated ritual of piling the fire altar."

"From Herodotus it is known that in the mid-5th century BCE the Zoroastrians worshipped to the open sky, ascending mounds to light their fires (The Histories, i.131). Strabo confirms this, noting that in the 6th century, the sanctuary at Zela in Cappadocia was an artificial mound, walled in, but open to the sky (Geographica XI.8.4.512).".....http://en.wikipedia.org/wiki/Fire_temple

"Of the Denkart, or Acts of the religion, only Books III-IX, containing about 169,000 words, were discovered at Bagdad in 1020.......One section informs us that the Farnbag fire is put in the position of priests, the Gushnasp fire in that of warriors, and the Burzinmihr fire in that of agriculturists. ....."....http://www.farvardyn.com/pahlavi2.php

"Following the Battle of al-Qādisiyyah (636 CE) and the Battle of Nihawānd (642 CE), both of which were instrumental to the collapse of the Sassanid Empire and state-sponsored Zoroastrianism, most fire temples in Greater Iran were either destroyed or converted into mosques. Many Zoroastrians fled, (according to one legend) taking a fire with them....According to Parsi legend, when (over a thousand years ago) one group of refugees from (greater) Khorasan landed in Western Gujarat, they had the ash of such a fire with them. This ash, it is said, served as the bed for the fire today at Udvada. (Boyce & Kotwal, 2006)".....http://en.wikipedia.org/wiki/Fire_temple

"The oldest remains of what has been identified as a fire-temple are those on Mount Khajeh, near Lake Hamun in Sistan. Only traces of the foundation and ground-plan survive and have been tentatively dated to the 3rd or 4th century BCE......

"Adur Gushnasp in Media Minor ....Although "in the eyes of [contemporary] Iranian Zoroastrian priests, the three fires were not 'really existing' temple fires and rather belonged to the mythological realm" (Stausberg, 2004:134), several attempts have been made to identify the locations of the Great Fires. In the early 20th century, A. V. Jackson identified the remains at Takht-i-Suleiman, midway between Urumieh and Hamadan, as the temple of Adur Gushnasp. The location of the Mithra fire, i.e. that of Burzen-Mihr, Jackson "identified with reasonable certainty" at being near the village of Mihr half-way between Miandasht and Sabzevar on the Khorasan road to Neyshabur (Jackson, 1921:82). The Indian (lesser) Bundahishn records the Farnbag fire having been "on the glory-having mountain which is in Khwarezm" but later moved "upon the shining mountain in the district of Kavul just as it there even now remains" (IBd 17.6). That the temple once stood in Khwarezm is also supported by the Greater (Iranian) Bundahishn and by the texts of Zadsparam (11.9). However, according to the Greater Bundahishn, it was moved "upon the shining mountain of Kavarvand in the Kar district" (the rest of the passage is identical to the Indian edition). Darmesteter identified this 'Kar' as Kariyan in Pars (Persia proper), "celebrated for its sacred fire which has been transported there from Khvarazm as reported by Masudi" (Jackson, 1921:89). If this identification is correct, the temple of the Farnbag fire then lay 10 miles southwest of Juwun, midway between Jahrom and Lar..".....http://en.wikipedia.org/wiki/Fire_temple 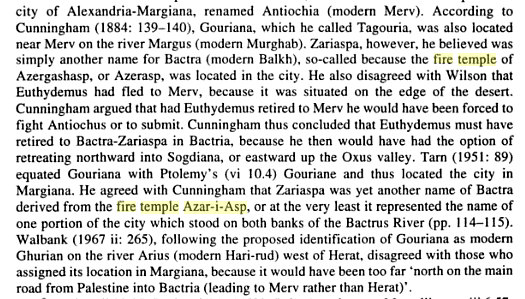 The Impact of Seleucid Decline on the Eastern Iranian Plateau......by Jeffrey D. Lerne

"A fire temple in Zoroastrianism is the place of worship for Zoroastrians, often called Dar-e Mehr (Persian) or Agiyari (Gujarati). In the Zoroastrian religion, fire (see Atar), together with clean water (see Aban), are agents of ritual purity. Clean, white "ash for the purification ceremonies [is] regarded as the basis of ritual life," which, "are essentially the rites proper to the tending of a domestic fire, for the temple [fire] is that of the hearth fire raised to a new solemnity" .....Today, there are 50 fire temples in Mumbai, 100 in the rest of India, and 27 in the rest of the world."....Boyce, Mary (1993), "Dar-e Mehr", Encyclopaedia Iranica

"Soma seems to have been used only as part of a fire-ritual. A golden liquid was expressed from the plant material with "soma-stones", filtered through wool and collected in a large bowl or "vat". In the course of this ritual a portion of the soma potion was used as a libation and was "sacrificed" to the flames. The remainder of the soma-liquid was apportioned among the celebrants who received it in individual bowls......Occasionally in the Vedas, and frequently in post-Vedic literature such as the story of the "churning of the ocean", the soma-liquid is known as amrita. This is especially so in the literature of Buddhism where the name soma is almost unknown. Soma is also the name of a god, considered by Hindus to be the divine personification both of the soma-drug and of the moon. The moon was thought to be the receptacle of soma from which it is consumed (presumably over a monthly period) by the gods and ancestors.......Compared to the Brahmanic rituals of later eras this fire-ritual was a very simple affair which has more in common with shamanic practices than the elaborate structures of organized religion. There are three main gods invoked in the Rigveda: Agni (god of fire), Soma (moon-god and personification of the soma drug), and Indra (sky-god and king of the gods). As the Rigveda states that (a) Indra enjoys the effects of soma and that (b) he who consumes the soma potion becomes god-like, perhaps it would not be straining the symbolism too far to say that in these three gods we have the three basic elements of the ritual, Agni (the sacrificial flames), Soma (the sacrificial offering) and Indra (the celebrant, rendered "divine" by the consumption of soma)......That the ritual is of Aryan origin rather than an indigenous Indian one is attested to by the existence of the similar haoma fire ritual in ancient Persia and in the Zoroastrian (Parsi) religion. The Indian fire-ritual was, in later times, taken up by Tantric Buddhists and, as a part of Vajrayana Buddhism, was carried into Tibet, Mongolia, China and even as far as Japan where it is known as goma."......http://www.erowid.org/plants/amanitas/amanitas_writings1.shtml