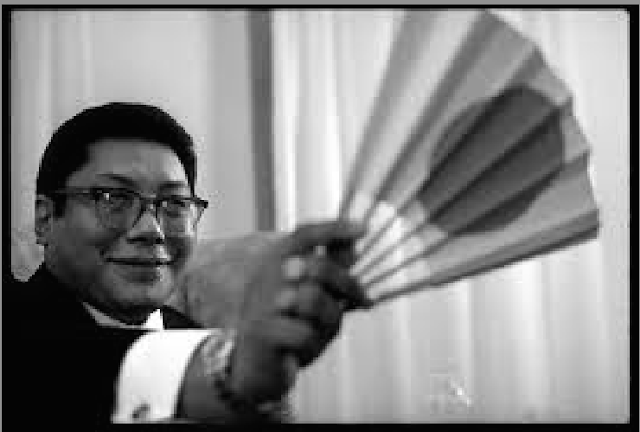 "Look at the sun. The sun is shining. Nobody polishes the sun. The sun just shines. Look at the moon, the sky, the world at its best. Unfortunately, we human beings try to fit everything into conditionality. We try to make something out of nothing. We have messed everything up. That’s our problem. We have to go back to the sun and the moon, to dragons, tigers, lions, garudas (mythical birds). We can be like the blue sky, sweethearts, and the clouds so clean, so beautiful. We don’t have to try too hard to find ourselves. We haven’t really lost anything; we just have to tune in. The majesty of the world is always there." Chögyam Trungpa, Rinpoche...“Helping Others...Great Eastern Sun: The Wisdom of Shambhala.

".....Gentleness is the rule in the Shambhala kingdom. It is actually much more terrifying than kindness, to your surprise. When you are gentle, there's no room for hostility. We like being hostile; we want to be perked up and energized by our negativity. But in Shambhala, we never do that, and we shouldn't do that. However, with Shambhala vision, there is festivity and joyousness, because we are not totally in the dungeon of our neurosis. That cheerfulness is what we call the Great Eastern Sun. The model for the Great Eastern Sun is the sun that shines at ten o'clock in the morning. The sun is no longer the early morning sun, and it is no longer a teenage sun. The sun is about to be full, but it's not quite full. That ten o'clock sun is the Great Eastern Sun.".....http://chronicleproject.com/stories_117.html

"Sacred World is connected with East, because there are always possibilities of vision in the world. East represents the dawn of wakefulness." "...the sacred world is lighted by the sun, which is the principle of never-ending brilliance and radiance...[and] with seeing self-existing possibilities of virtue and richness in the world." (pg 127) (see Sacred World.) If you in the sky, the sun is there. By looking at it, you don't produce a new sun. ... When you discover the sun in the sky, you begin to communicate with it. Your eyes begin to relate with the light of the sun. - See "Drala" principle." (pg 106) .....http://www.glossary.shambhala.org/#FOURDIGNITIES

Certain Shambhala practices derive from specific terma texts of Trungpa Rinpoche's such as Letter of the Black Ashe, Letter of the Golden Key that Fulfills Desire, Golden Sun of the Great East, and the Scorpion Seal of the Golden Sun, in long and short versions...(http://en.wikipedia.org/wiki/Shambhala_Buddhism)

In Shambhala: The Sacred Path of the Warrior Chögyam Trungpa offers an inspiring and practical guide to enlightened living based on the Shambhala journey of warriorship, a secular path taught internationally through the Shambhala Training program. ....The Great Eastern Sun: The Wisdom of Shambhala is a continuation of that path. Shambhala was an exploration of human goodness and its potential to create an enlightened society—a state that the author calls "nowness." And in that spirit of nowness, Great Eastern Sun —which is accessible to meditators and nonmeditators alike—centers on the question, "Since we're here, how are we going to live from now on?" 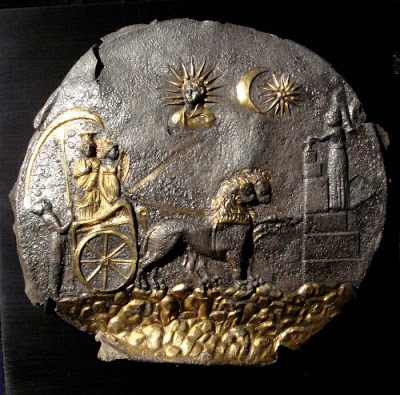 Amaterasu (天照?), Amaterasu-ōmikami (天照大神／天照大御神?) or Ōhirume-no-muchi-no-kami (大日孁貴神?) is a part of the Japanese myth cycle and also a major deity of the Shinto religion. She is the goddess of the sun, but also of the universe. The name Amaterasu derived from Amateru meaning "shining in heaven." The meaning of her whole name, Amaterasu-ōmikami, is "the great august kami (Gama or God) who shines in the heaven".] The Emperor of Japan is said to be a direct descendant of Amaterasu.

The Golden Sun of the Great East is a beautiful hardbound edition of a Shambhala root text by Dorje Dradül of Mukpo. It features cloth binding with gold-lettered spine, a gold scorpion seal on the front cover, and saffron endpapers. This second edition of the text has been re-edited, using gender-inclusive language wherever possible. Other amendments have been made based on a re-examination of the original Tibetan manuscript, which appears alongside the English translation. Translated from Tibetan by the Vajravairochana Translation Committee under the direction of Dorje Dradül of Mukpo.....Vajradhatu Publications....Hardcover, 6" x 9".....40 pp.......Available to students at Shambhala Warrior Assembly and beyond.....http://www.shambhalamedia.org/ProductDetails.asp?ProductCode=BVN176

"Iranian background.....The male sun had always been associated with Persian royalty: Iranian tradition recalls that Kayanids had a golden sun as their emblem. From the Greek historians of classical antiquity it is known that a crystal image of the sun adorned the royal tent of Darius III, that the Arsacid banner was adorned with the sun, and that the Sassanid standards had a red ball symbolizing the sun. The Byzantine chronicler Malalas records that the salutation of a letter from the "Persian king, the Sun of the East," was addressed to the "Roman Caesar, the Moon of the West". The Turanian king Afrasiab is recalled as saying: "I have heard from wise men that when the Moon of the Turan rises up it will be harmed by the Sun of the Iranians." The sun was always imagined as male, and in some banners a figure of a male replaces the symbol of the sun. In others, a male figure accompanies the sun."....http://en.wikipedia.org/wiki/Lion_and_Sun#Iranian_background

"Manjushrí Kírti (Tib. Rigdan Jampel Dakpa) is said to have been born in 159 BCE and ruled over Shambhala which had 300,510 followers of the Mlechha (Yavana or "western") religion living in it, some of whom worshiped the sun. He is said to have expelled all the heretics from his dominions but later, after hearing their petitions, allowed them to return. For their benefit, and the benefit of all living beings, he explained the Kalachakra teachings."....http://en.wikipedia.org/wiki/Kalachakra