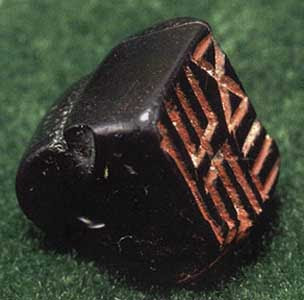 Three months after the announcement of its discovery in Central Asia, a tiny stone object inscribed with symbols thought to be the writing of an obscure desert culture from 4,000 years ago is more of an enigma than ever.....If this is indeed an early form of writing, as its discoverer has suggested, it is strong evidence for a previously unknown civilization that began about 2300 B.C. across much of modern Turkmenistan and parts of Uzbekistan and Afghanistan....An even more puzzling aspect of the discovery has been raised by specialists in ancient Chinese writing. They contend that the inscription bears more than a passing resemblance to Chinese writing -- not an early script, but one that was not used until about 200 B.C.... There is no clear evidence for Chinese writing before about 1300 or 1200 B.C. -- 1,000 years after people lived at the Anau site in Turkmenistan where the mysterious inscription was unearthed.

"Scholars have long predicted an important outside influence on the Sumerians (as Anau reveals levels which go back to the Copper Age, c. 4500 BCE), and many see the Bronze Age Bactrians as eventually contributing to the Harappan Indus Valley civilization, though whether through trade, conquest, or some unremarkable and unknown process, is not yet clear."

20 minutes by car from Ashgabat to the south east, this site includes the remains of the Bronze age settlement Anau -Depe and the fortress of Anau. The name Anau derives from Abi-Nau, meaning "new water". The site was already inhabited in the 4-3 millenium B.C. The culture of this period has been named Anau culture. Excavations began in 1904 when an American archaeologist R. Pempelli launched an expedition. The site includes a great wall and a ditch. Some skeletons of children, the remains of the painted ceramics, decorated with the geometrical ornament and the most ancient remains of the camels were discovered at the time of excavations. According to the scientists camels were domesticated at first just on the territory of the present day Turkmenistan. Anau fortress already existed during the Parthian period /3d c BC- 3d c. AD/.

Another possibility, which would throw the scholarship of Chinese writing into turmoil, is that the 2300 inscription date is correct. That would suggest that influences from Central Asia or farther west might have contributed to the invention of Chinese writing. Dr. Mair, who holds that such influences were greater than previously thought, has raised this controversial point. ''The Anau seal forces us to rethink in a most radical fashion the origins of the Chinese script,'' he said.

Anau was one of several settlements in the foothills that preceded the culture's expansion around 2200 B.C. out into the arid basin, where the residents practiced irrigated farming at oases. Whoever the people were, their culture is now called the Bactria Margiana Archaeology Complex. It disappeared a few hundred years after the expansion.......Previous research had shown that the culture built large urban centers with fortifications, had the administrative skills to develop extensive irrigation systems and produced surpluses to pay for fine ceramics, jewelry and bronze goods. If Dr. Hiebert's findings are correct, the culture also developed a writing, or proto-writing systems. Thus, by the definition of some anthropologists, the culture probably could be considered an early civilization that was later lost.

8000 BCE......"we are looking at a part of the world, even though it had been forgotten by western scholars, which really takes its place as a partner in the development from the first farmers about 10,000 years ago up to early villagers when we see the beginning of our settlement in Anau at Turkmenistan 4,500 B. C., all the way through the development of these large cities that we are finding out in the deserts. And I am quite convinced that 5,000 years ago an ancient Sumerian would have some understanding of what a central Asian was, or what central Asian artifacts were and vice versa."....Fredrik Talmage Hiebert, Ph.D., Prof. of Anthropology, Univ. of Pennsylvania Museum of Archaeology and Anthropology and Assistant Curator of Near Eastern Archaeology, Philadelphpia, Pennsylvania