The Rigveda (Sanskrit: ऋग्वेद ṛgveda, a compound of ṛc "praise, verse" and veda "knowledge") is an ancient Indian sacred collection of Vedic Sanskrit hymns. It is counted among the four canonical sacred texts (śruti) of Hinduism known as the Vedas. Some of its verses are still recited as Hindu prayers, at religious functions and other occasions, putting these among the world's oldest religious texts in continued use. The Rigveda contains several mythological and poetical accounts of the origin of the world, hymns praising the gods, and ancient prayers for life, prosperity, etc.".....http://en.wikipedia.org/wiki/Rigveda 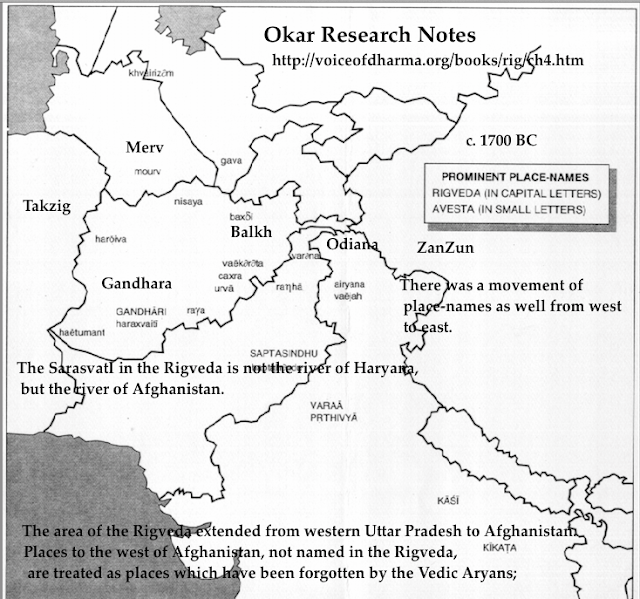 "It is one of the oldest extant texts in any Indo-European language. Philological and linguistic evidence indicate that the Rigveda was composed in the north-western region of the Indian subcontinent, roughly between 1700–1100 BC (the early Vedic period)....There are strong linguistic and cultural similarities with the early Iranian Avesta, deriving from the Proto-Indo-Iranian times, often associated with the early Andronovo and Sintashta-Petrovka cultures of ca. 2200–1600 BC....Being composed in an early Indo-Aryan language, the hymns must post-date the Indo-Iranian separation, dated to roughly 2000 BC.[....

The Rigveda describes a mobile, semi-nomadic culture, with horse-drawn chariots, oxen-drawn wagons, and metal (bronze) weapons. The geography described......Rivers flow north to south, the mountains are relatively remote but still visible and reachable (Soma is a plant found in the high mountains, and it has to be purchased from tribal people). Nevertheless, the hymns were certainly composed over a long period, with the oldest (not preserved) elements possibly reaching back to times close to the split of Proto-Indo-Iranian (around 2000 BC) ....Thus there was some debate over whether the boasts of the destruction of stone forts by the Vedic Aryans and particularly by Indra refer to clashes between the early Indo-Aryans with the BMAC in what is now northern Afghanistan and southern Turkmenistan (separated from the upper Indus by the Hindu Kush mountain range, and some 400 km distant)...... 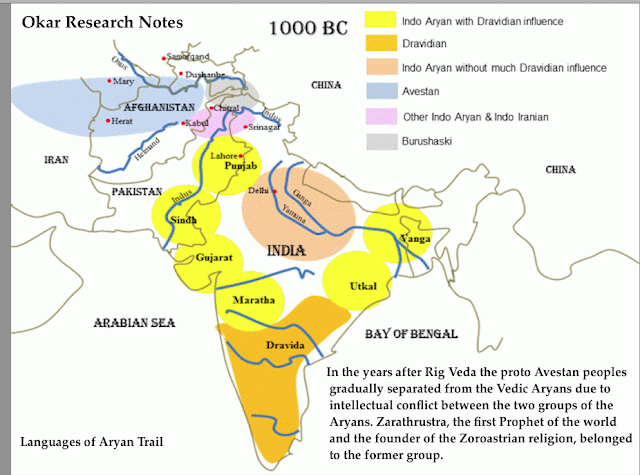 "In the years after Rig Veda the proto Avestan peoples gradually separated from the Vedic Aryans due to intellectual conflict between the two groups of the Aryans. Zarathrustra, the first Prophet of the world and the founder of the Zoroastrian religion, belonged to the former group. The language of Avesta, the earliest texts of the Zoroastrians, has surreptitious similarities to the Rig Vedic language. Most of the philosophic concepts of Avesta more or less have corresponding counterparts in Rig Veda. So it's apt to consider Avestan in the repository of the languages of Aryan Trail."....https://sites.google.com/site/awesomesneakpeekers/reference/compilations/languages-of-aryan-trail

"In Vedic cosmology also (where in the Rig Veda, Mitra is mentioned over 200 times), Mitra appears often to be more angel than god.....The ’Mithras-cult’ images of Mithras that we see here are typical close variations on the same scene, where Mithras fights the sacred bull, with his cloak billowing out behind him in a way that seems meant to suggest wings. ....Over and over again we find Mithras depicted in this way. ....’Mihr’, the ancient Persian form of the word ’Mithras’, meant not only ’sun’ but also ’friend’, and this is how Mithras was worshipped, both as a distant sun-god and also as a close personal source of love and support (ideas which are not a million miles away from the concept of a ’guardian angel’...)."....www.bibliotecapleyades.net

"The Buddha declared that the Veda in its true form was declared by Kashyapa to certain rishis, who by severe penances had acquired the power to see by divine eyes. In the Buddhist Vinaya Pitaka of the Mahavagga section the Buddha names these rishis, and declared that the original Veda the Vedic rishis "Atthako, Vâmako, Vâmadevo, Vessâmitto, Yamataggi, Angiraso, Bhâradvâjo, Vâsettho, Kassapo, and Bhagu"

"In the Buddhist Vinaya Pitaka of the Mahavagga section the Buddha pays respect to Kashyap by declaring that the Veda in its true form was declared to the Vedic rishis "Atthako, Vâmako, Vâmadevo, Vessâmitto, Yamataggi, Angiraso, Bhâradvâjo, Vâsettho, Kassapo, and Bhagu" and because that true Veda was altered by some priests he refused to pay homage to the altered version."....http://en.wikipedia.org/wiki/Kashyap

The Vedas (Sanskrit वेदाः véda, "knowledge") are a large body of texts originating in ancient India. Composed in Vedic Sanskrit, the texts constitute the oldest layer of Sanskrit literature and the oldest scriptures of Hinduism. The Vedas are apauruṣeya ("not of human agency"). They are supposed to have been directly revealed, and thus are called śruti ("what is heard"), distinguishing them from other religious texts, which are called smṛti ("what is remembered"). The Vedic texts or śruti are organized around four canonical collections of metrical material known as Saṃhitās, of which the first three are related to the performance of yajna (sacrifice) in historical Vedic religion:
The Rigveda, containing hymns to be recited by the hotṛ;
The Yajurveda, containing formulas to be recited by the adhvaryu or officiating priest;
The Samaveda, containing formulas to be sung by the udgātṛ.
The fourth is the Atharvaveda, a collection of spells and incantations, apotropaic charms and speculative hymns.


Hausōs .....One of the most important goddesses of reconstructed Proto-Indo-European religion is the personification of dawn as a beautiful young woman. Her name is reconstructed as (PIE *h₂ewsṓs- or *h2ausōs-, an s-stem), besides numerous epithets.....The name *h₂ewsṓs is derived from a root *h₂wes / *au̯es "to shine", thus translating to "the shining one". Both the English word east and the Latin auster "south" are from a root cognate adjective *aws-t(e)ro-. Also cognate is aurum "gold", from *awso-. The name for "spring season", *wes-r- is also from the same root. The dawn goddess was also the goddess of spring, involved in the mythology of the Indo-European new year, where the dawn goddess is liberated from imprisonment by a god (reflected in the Rigveda as Indra, in Greek mythology as Dionysus and Cronus)......The abduction and imprisonment of the dawn goddess, and her liberation by a heroic god slaying the dragon who imprisons her, is a central myth of Indo-European religion, reflected in numerous traditions. Most notably, it is the central myth of the Rigveda, a collection of hymns surrounding the Soma rituals dedicated to Indra in the new year celebrations of the early Indo-Aryans. 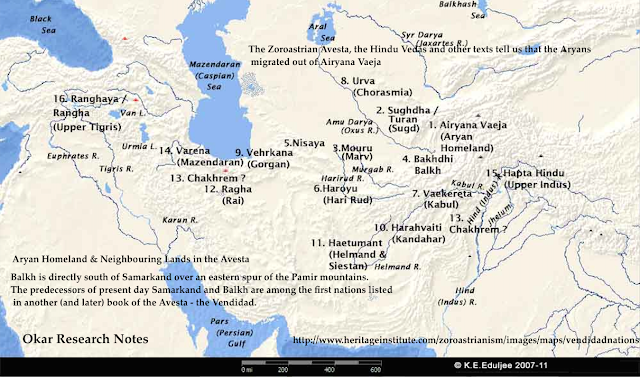 "Relationship Between Airyana Vaeja and the Other Nations of the Avesta....The sixteen nations listed in the Vendidad were selected by the author or authors of the Vendidad from among the nations of the known world. The list is therefore not a list of the world's nations, but a list of nations connected with Airyana Vaeja. The Vendidad nations listed after Airyana Vaeja, are those to which Aryans migrated from Airyana Vaeja, intermingling as they did, with the peoples of those lands. While Zoroastrian-Aryans inhabited these lands, they were not necessarily the majority people in these lands. ...All of the Vendidad nations would at some point come together as part of the larger Aryan, Iranian, or Persian empires.....Migration of the Aryans and Expansion of Aryan Lands....Before the era of legendary King Jamshid, see (Aryan Prehistory and Location of Aryan Homeland), the original Aryan homeland in the Avesta, Airyana Vaeja, could not have been very large. However, starting in the Jamshidi era and continuing up to the establishment of the Achaemenian Persian empire under Darius the Great, the Aryan lands did grow considerably in size. ....The Zoroastrian Avesta, the Hindu Vedas and other texts tell us that the Aryans migrated out of Airyana Vaeja and that the lands associated with the Aryans increased in size.".....http://www.heritageinstitute.com/zoroastrianism/aryans/airyanavaeja.htm

The Avesta Yashts are old hymns describing Persian sacred mythology. Possibly Vedic verses akin to the Gathas were in use by the Indo-European tribes that entered Iran in the first millennium and Zoroaster revized them about the time that the tribes settled, around the 9th or 8th century BC. Mary Boyce declares: The fluidity of the oral tradition by which almost all Avestan hymns have been transmitted makes it impossible to date their subject matter at all clearly.

Email ThisBlogThis!Share to TwitterShare to FacebookShare to Pinterest
Labels: Texts, The Vedas, Traditions