"Rasāyana, रसायन is a Sanskrit word, with literal meaning: Path (āyana) of essence (rasa). It is a term that in early ayurvedic medicine means the science of lengthening lifespan, and in later (post 8th-century) works sometimes refers to Indian alchemy......The name of the science of Indian alchemy or proto-chemistry, is more generally "The Science of Mercury", or Rasaśāstra, रसशास्त्र in Sanskrit, Nepali, Marathi, Hindi, Kannada and several other languages. Early Indian alchemical texts discuss the use of prepared forms of mercury or cinnabar....The oldest Indian writings, the Vedas (Hindu sacred scriptures), contain the same hints of alchemy that are found in evidence from ancient China....An 11th-century Persian chemist and physician named Abū Rayhān Bīrūnī reported that "They have a science similar to alchemy which is quite peculiar to them. They call it Rasâyana, a word composed with rasa, i.e., gold."......http://en.wikipedia.org/wiki/Rasayana

"The form of ascesis expounded in the Tantras, unlike the Sutras and the Vinaya which taught the methods of the path of renunciation, taught the methods of transformation, where the poisons of the passions, far from being renounced were actually cultivated to their extreme, in order that their energy might be transmuted within the alchemical vessel of the physical human body into the luminous nectar of enlightened awareness. There was a deliberate and clear parallel here with alchemy-- the kleshas or passions through the alchemical process of sadhana were transmuted into Jnana (gnosis) or knowledge. Thus the things of the world that are usually renounced by the ascetic-- wine, meat, and sex-- which are seen as the fetters binding the spirit to matter and nature, especially the latter (women and sex) are not renounced in the higher Tantras but actually employed as the very means to enlightenment. But this was not an excuse or rationale to party with wine, women, and song-- it represented a highly disciplined ascetic path. And since the methods of the Tantra principally works with energy, and one of the most important and powerful energies in human experience is sex desire, a sophisticated sexual yoga developed, known as Upayamarga and as Karmamudra. Yoga practitioners took consorts or sexual partners from among the village girls, including even outcaste girls, such as Dombhis, Chandalis, etc. and lived with them in retreat or in the villages while plying humbles trades. For example, the young Brahman scholar Saraha defiled his caste status by living openly with a low caste who was an arrow-maker, yet he is considered one of the greatest poets and scholars of the Buddhist Tantric tradition. Or Naropa, once a professor and chancellor at Nalanda monastic university, abandoned his academic career to pursue the teachings of Tilopa, a wild-eyed and apparently half-mad ascetic who lived in a series of remote cremation grounds in the company of women of questionable virtue. In India generally the Anuttara Tantras were not practiced in the monasteries because their practice was incompatible with the Vinaya, the rules and vows incumbent upon a monk. At first this was also the case in Tibet.".......http://www.vajranatha.com/articles/traditions/mahasiddha.html 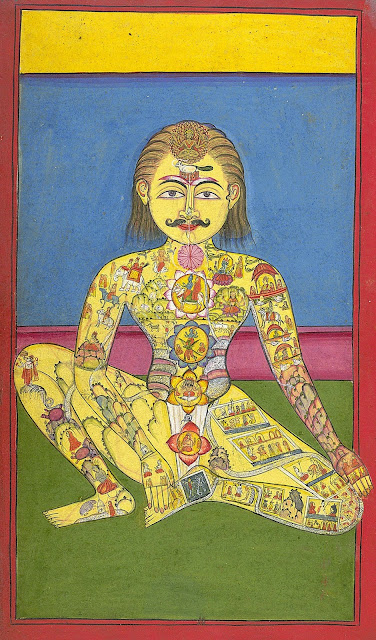 "The subtle body in Indian mysticism, from a Yoga manuscript in Braj Bhasa language, 1899, now in the British Library....The various attributes of the subtle body are frequently described in terms of often obscure symbolism: Tantra features references to the sun and moon as well as various Indian rivers and deities, while Taoist alchemy speaks of cauldrons and cinnabar fields."

"Chang Tao-Ling, the first Taoist pope, was born in A.D. 35 in the reign of the Emperor Kuang Wu Ti of the Hari dynasty. His birthplace is variously given as T'ien-mu Shan, Lin-an-Hsien in Chekiang, Feng-yang Fu in Anhui, and even in the "Eye of Heaven Mountain." He devoted himself wholly to study and meditation, declining all offers to enter the service of the state. He preferred to take up his abode in the mountains of Western China where he persevered in the study of alchemy and in cultivating the virtues of purity and mental abstraction. From the hands of the alchemist Lao Tzu, he received supernaturally a mystical treatise, by following the instructions in which he was successful in his match for the Elixir of Life.".....Werner, E. T. C. (1922). Myths & Legends of China.

Avicenna......Abū ʿAlī al-Ḥusayn ibn ʿAbd Allāh ibn Sīnā (Persian پور سينا Pur-e Sina [ˈpuːr ˈsiːnɑː] "son of Sina"; c. 980 – June 1037), commonly known as Ibn Sīnā or by his Latinized name Avicenna, was a Persian polymath, who wrote almost 450 treatises on a wide range of subjects, of which around 240 have survived. In particular, 150 of his surviving treatises concentrate on philosophy and 40 of them concentrate on medicine.....Avicenna was born c. 980 in Qishlak Afshona, a village near Bukhara (in present-day Uzbekistan), the capital of the Samanids, a Persian dynasty in Central Asia and Greater Khorasan. His mother, named Setareh, was from Bukhara; his father, Abdullah, was a respected Ismaili scholar from Balkh, an important town of the Samanid Empire, in what is today Balkh Province, Afghanistan...Ibn Sīnā used distillation to produce essential oils such as rose essence, forming the foundation of what later became aromatherapy. Four of his works on alchemy were translated into Latin.....

"....alchemy in India started somewhere between 500 A.D. and 1000A.D. Mahdihassan asserts in his book that alchemy is the art of rejuvenation using mercurials and that Rasayana is the generic term for art of rejuvenation. Mahdihassan suggest that the physician Charaka mentions drugs as a means to rejuvenation in his work. Vagbhatta, another master of Indian medicine who lived around 800 A.D. divided medicine into eight different components. The two that are of interest to Indian alchemy are Rasayana-Tantra of the doctrine of elixirs and Vajikarana-Tantra of the doctrine of aphrodisiacs. The Rasayana-Tantra is confirmed by Charaka and Vaghatta, to be geriatric although it is first classified as a doctrine of rejuvenation. Later in history Alberuni speaks of this system (Rasayana-Tantra) as a “well organized system in India”. Therefore later writers about Indian alchemy, such as Sir P.C. Rays, use Alberuni as a primary source for information.
Alberuni lived in India between 1017 to 1030 A.D. and during this time he found that Hindus had a science called Rasayana. The main principles of this science are to restore help of those who were ill beyond hope, give back youth to the elderly, and restore the capacity of juvenile agility.5 Alberuni also discusses briefly that “calcination and sublimation inclined towards mineralogical method of alchemy”. In Aberuni's India, Alberuni discusses the author Nagarjuna who wrote a book about alchemy about one hundred years prior to Alberuni's arrival in India. This allusion to Nagarjuna in Alberuni's work asserts the existence of alchemy in India during the tenth century but the exact date cannot be fixed."....http://home.wlu.edu/~lubint/touchstone/2000/IndAlchemy-Griffith.htm

"All in all, it needs to be said that the spagyric art or alchemy respectively was not a phenomenon typical for the medieval period. Here, the vast amount of literature which was produced and made available through the development of the printing press can be deceptive. On the other hand, when reading in detail one or the other late-medieval treatise on Spagyric or Natural Philosophy, you will frequently find remarks like, „we hardly understand this art completely – the elder, however, were great masters in it“. And then, when consulting the texts of these „elders“, for example the ancient and late-ancient Greek, the Arabic and the Chinese scriptures, like Zosimos, Al Rhasis or Ko Hung, everywhere again you find references to the „elders“, who had mastered the „art“ in a far more profound way. No wonder it is claimed that, to some extent the lively iatrochemical and alchemy traditions of India, Central Asia and the eastern mountain regions ascribe to their lore an age of many thousand years, and further mention that an exchange between East and West had always been taking place."...http://www.alchemyintertraditional.com/english/paracelsus-tradition-in-an-intertraditional-consens/

"Ancient alchemists in China spent centuries trying to discover an elixir of life that would render the user immortal. One important ingredient in many of the failed elixirs was saltpeter, also known as potassium nitrate.....During the Tang Dynasty, around 850 A.D., an enterprising alchemist (whose name has been lost to history) mixed 75 parts saltpeter with 15 parts charcoal and 10 parts sulfur.....Gunpowder was discovered by accident...."http://asianhistory.about.com/od/asianinventions/a/InventGunpowder.htm 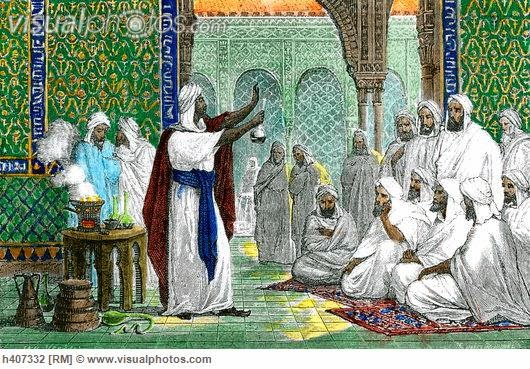 "Abu Mūsā Jābir ibn Hayyān (al-Barigi / al-Azdi / al-Kufi / al-Tusi / al-Sufi), often known simply as Geber, (Arabic: جابر بن حیان‎) (Persian: جابرحیان) (c.721–c.815)was a prominent polymath: a chemist and alchemist, astronomer and astrologer, engineer, geographer, philosopher, physicist, and pharmacist and physician. Born and educated in Tus, he later traveled to Kufa. Jābir is held to have been the first practical alchemist........born in Khorasan, in Iran (Persia),then ruled by the Umayyad Caliphate......After the Abbasids took power, Jābir went back to Kufa. He began his career practicing medicine, under the patronage of a Vizir (from the noble Persian family Barmakids) of Caliph Harun al-Rashid. His connections to the Barmakid cost him dearly in the end. .....

"Few substances in history have had as profound an effect on human history as gunpowder... and its discovery was an accident!....Ancient alchemists in China spent centuries trying to discover an elixir of life that would render the user immortal. One important ingredient in many of the failed elixirs was saltpeter, also known as potassium nitrate.....During the Tang Dynasty, around 850 A.D., an enterprising alchemist (whose name has been lost to history) mixed 75 parts saltpeter with 15 parts charcoal and 10 parts sulfur. This mixture had no discernable life-lengthening properties, but it did explode with a flash and a bang when exposed to an open flame. According to a text from that era, "smoke and flames result, so that [the alchemists'] hands and faces have been burnt, and even the whole house where they were working burned down."....Many western history books over the years have stated that the Chinese used this discovery only for fireworks, but that is not true. Song Dynasty military forces as early as 904 A.D. used gunpowder devices against their primary enemy, the Mongols. These weapons included "flying fire" (fei huo), an arrow with a burning tube of gunpowder attached to the shaft. Flying fire arrows were miniature rockets, which propelled themselves into enemy ranks and inspired terror among both men and horses. It must have seemed like fearsome magic to the first warriors who were confronted with the power of gunpowder...."Gunpowder was, according to prevailing academic consensus, discovered in the 9th century in China, attributed to Chinese alchemists searching for an elixir of immortality....This discovery led to the invention of fireworks and the earliest gunpowder weapons in China. In the centuries following the Chinese discovery, gunpowder weapons began appearing in the Arab world, Europe, and India....The most primitive form of the gun is the Fire lance they were used in China from at least 1132 AD.......1300 AD The hand cannon (the first portable fire arm and the origin of the word gun called a "Gonne")".....http://asianhistory.about.com/od/asianinventions/a/InventGunpowder.htm