"The 4th millennium BC saw major changes in human culture. It marked the beginning of the Bronze Age and the invention of writing, which played a major role in starting recorded history.....The city states of Sumer and the kingdom of Egypt were established and grew to prominence. Agriculture spread widely across Eurasia. World population in the course of the millennium doubled, approximately from 7 to 14 million people." 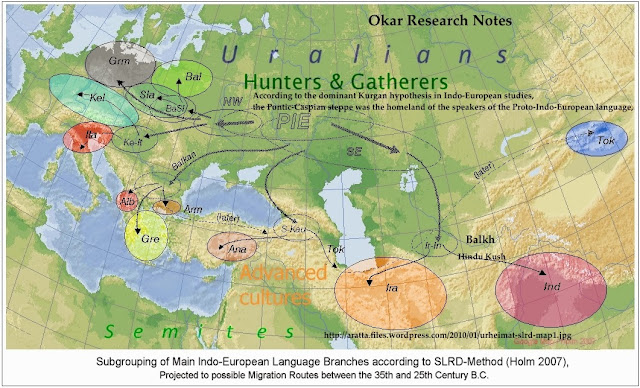 The Indo-Iranians transferred geographical names from Iran to India as they migrated south about 1400 BC. Indian Sarasvati and Iranian Hara Vaiti for example. (Burrow: 1973..pg 126)...

The Aryan folk religion was polytheistic. In Hittite inscriptions Mitra, Varuna, and Indra, among others—are mentioned as gods of the Iranian Mitannians at the beginning of the fourteenth century BC. Zoroaster taught a new religion, but it was rooted in the old Iranian or Aryan religion. 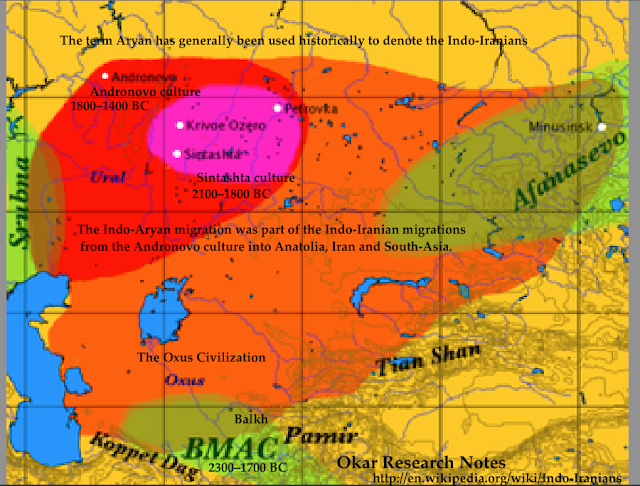 Linguists are able to reconstruct the names of some deities in the Proto-Indo-European language (PIE) from many types of sources. Some of the proposed deity names are more readily accepted among scholars than others.....The term for "a god" was *deiwos, reflected in Hittite, sius; Latin, deus, Sanskrit deva; Avestan, daeva (later, Persian, divs); Welsh duw; Irish dia, Lithuanian, Dievas; Latvian, Dievs.
*Dyēus Ph2tēr is the god of the day-lit sky and the chief god of the Indo-European pantheon. The name survives in Greek Zeus with a vocative form Zeu pater; Latin Jūpiter (from the archaic Latin Iovis pater; Diēspiter), Sanskrit Dyáus Pitā, and Illyrian Dei-pátrous.

Iranians and Indians share the same ancestors identified as proto-Indo-Iranians. These people belonged to the Indo-European family of nations and lived as pastoralists on the Southern Russian steppes, to the east of Volga. They formed semi-migratory groups herding their cattle, sheep and goats on limited areas on foot with help from dogs. Their society was divided into three main groups: priests, warriors and herdsman. From the fourth to the third millennium BC the Proto-Indo-Iranians forged a significant religious tradition that has influenced their descendants, the Brahmans of India and the Zoroastrians of Iran. The two groups were very likely separated around the third millennium BC and linguistically became two distinct groups, the Indians and Iranians.

"Ahura Mazda is Zoroaster’s invention, or the name is at least, though he was probably Varuna, embellished with the traits of other gods that Zoroaster thought were desirable ones. The oldest hymns in the Rig-Veda are the earliest expression of the primitive Indo-European religion, and are earlier than Zoroaster. In one hymn of the Rig-Veda (4:42), Varuna and Indra define their respective spheres of authority, and the former represents himself as the deity of law and order, of what is morally right, and so resembles Ahura Mazda, while Indra, a god whom Zoroaster denounced by name, says he is the patron of the aristocracy and delights in war and poetry. Nevertheless, the two gods are friendly and not rivals. Atharvaveda 4:16, credits Varuna with knowing every man’s inmost thoughts and with maintaining an army of invisible spirits who report on all the actions of men. In Rig-Veda 5:85, a worshipper begs Varuna to forgive his sins, if ever he sinned against someone he loved or wronged a brother, friend, comrade, neighbour, or even stranger. Varuna does boast that he is the greatest of the “asuras” and his will (law and order) is obeyed by other gods.
"So, Varuna is one of the few gods who have the title “asura” in the Vedas, and he is a god of order. “Asura” is most frequently applied to three gods in the old Vedic hymns, Dyaus, Varuna, and Mitra. Dyaus is the Greek Zeus but fades out of the Indian pantheon in later times. Mitra likewise fades out, but appears in the later Zoroastrian cult as Mithras. Varuna continues to be worshipped in India as one of the Thirty-Three Gods and is assigned jurisdiction over the ocean, as the Hindu equivalent of Neptune, and is the Regent of the West, one of the four gods who preside over the four cardinal points of the compass and the foreign lands that lie on that bearing"....http://www.cais-soas.com/CAIS/Religions/non-iranian/Judaism/Persian_Judaism/book2/pt4.htm

"In the Vedic religion, Ṛta (Sanskrit ऋतं ṛtaṃ "that which is properly joined; order, rule; truth") is the principle of natural order which regulates and coordinates the operation of the universe and everything within it. In the hymns of the Vedas, Ṛta is described as that which is ultimately responsible for the proper functioning of the natural, moral and sacrificial orders. Conceptually, it is closely allied to the injunctions and ordinances thought to uphold it, collectively referred to as Dharma, and the action of the individual in relation to those ordinances, referred to as Karma - two terms which eventually eclipsed Ṛta in importance as signifying natural, religious and moral order in later Hinduism. Sanskrit scholar Maurice Bloomfield referred to Ṛta as "one of the most important religious conceptions of the Rig Veda", going on to note that, "from the point of view of the history of religious ideas we may, in fact we must, begin the history of Hindu religion at least with the history of this conception".....http://en.wikipedia.org/wiki/Ṛtá