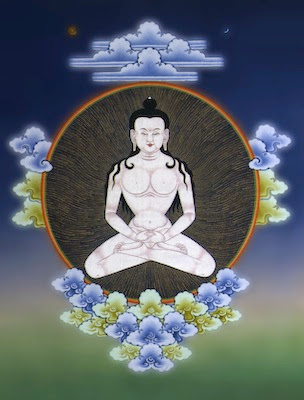 "According to Tibetan Buddhism and Bön, Dzogchen (Rdzogs chen) is the natural, primordial state or natural condition, and a body of teachings and meditation practices aimed at realizing that condition. Dzogchen, or "Great Perfection", is a central teaching of the Nyingma school also practiced by adherents of other Tibetan Buddhist sects. According to Dzogchen literature, Dzogchen is the highest and most definitive path to enlightenment....."


"Longchen Rabjampa, Drimé Özer (Wylie: Klong-chen rab-'byams-pa, Dri-med 'od-zer) "Longchenpa" (1308–1364) was a major teacher in the Nyingma school of Tibetan Buddhism. He was a critical link in the exoteric and esoteric transmission of the Dzogchen teachings. He was abbot of Samye, one of Tibet's most important monasteries and the first Buddhist monastery established in the Himalaya, but spent most of his life travelling or in retreat.....he is sometimes referred to by the honorary title "Second Buddha" (Tib. rgyal ba gnyis).....Longchenpa attracted more and more students, even though he had spent nearly all of his life in mountain caves. During a stay in Bhutan (Tib., Mon), Longchenpa fathered a daughter and a son....". 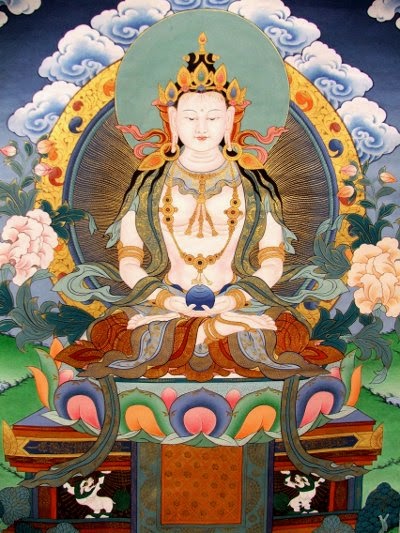 Lha Chen Shen Lha Woe Kar: the aspect of compassion of the universe....http://sardza.linuxpl.info/wp-content/uploads/2013/09/ShenlaOdkar.jpg

"Longchenpa combined the teachings of the Vima Nyingtig lineage with those of the Khandro Nyingtig, thus preparing the ground for the fully unified system of teachings that became known as the Longchen Nyingthig (by Jigme Lingpa)....Dowman, Keith, Old Man Basking In the Sun: Longchenpa's Treasury of Natural Perfection, Vajra Publications, 2006.....He was the author of over 200 works, of which only about twenty-five survive...." 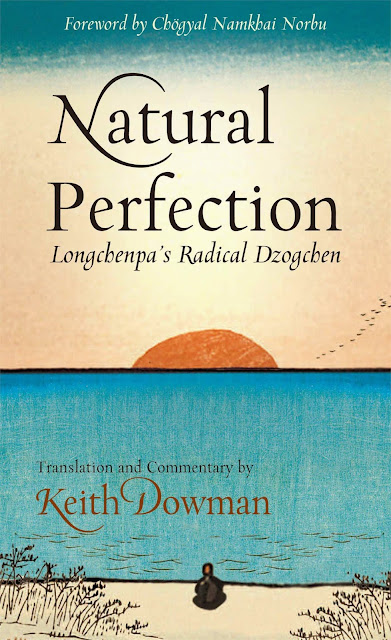 
"The Dzogchen practitioner is such insofar as he or she is free of spiritual identity or belief in any dogma. This natural freedom is intrinsic to doing nothing and allowing moment by moment autonomous deconstruction of his or her identity, both personal and spiritual.....Ordinary people, non-Buddhists, and Buddhist followers of the eight lower approaches (monastic, solitary ascetic, altruistic householders, tantric practitioners, atheists, hedonists and monotheistic eternalists....)....are identical in that they do not realize natural perfection.....In this important sense, every path is a dead end..."p.94

"Tulku Tsullo, a student of Tertön Sogyal Lerab Lingpa, describes it in the following way: The ‘empty essence’ is primordial purity. It refers to the empty aspect of the wisdom of empty clear light, the universal monarch who creates all samsara and nirvana, free from the very beginning and uncompounded. If we explain this further, just as ka is the ‘original’ or the very first of the thirty Tibetan consonants, the wisdom of clear light has always been ‘pure’ (dag) from its very origin or primordial beginning.".....http://www.rigpawiki.org/index.php?title=Primordial_purity