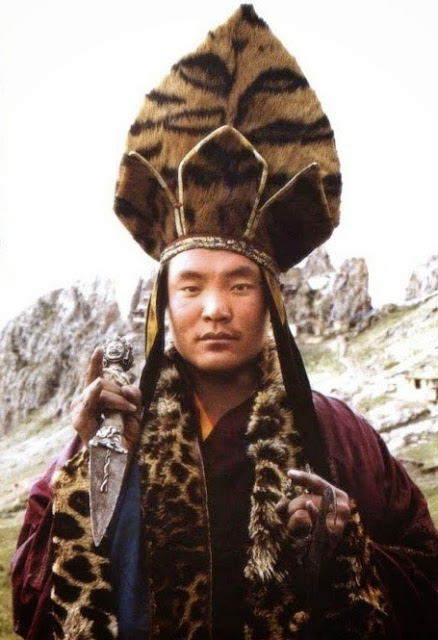 "The four animals (with the snow lion replacing the yak) also recur frequently in the Gesar epic, and sometimes Gesar and his horse are depicted with the dignities in place of the windhorse. In this context the snow lion, garuda and dragon represent the Ling (wylie: Gling) community from which Gesar comes, while the tiger represents the family of the Tagrong (wylie: sTag rong), Gesar's paternal uncle.......Karmay, Samten G. The Arrow and the Spindle: Studies in History, Myths, Rituals and Beliefs in Tibet. Mandala Publishing: 1998 pg. 421

"The late 20th century Tibetan Buddhist master Chogyam Trungpa incorporated variants of many of the elements above, particularly windhorse, drala, the four animals: Tiger,Snow Lion,Garuda,Dragon (which he called "the four dignities"), wangtang, lha, nyen and lu, into a Secular system of teachings he called Shambhala Training. It is through Shambhala Training that many of the ideas above have become familiar to westerners.".....http://en.wikipedia.org/wiki/Wind_Horse#cite_ref-8 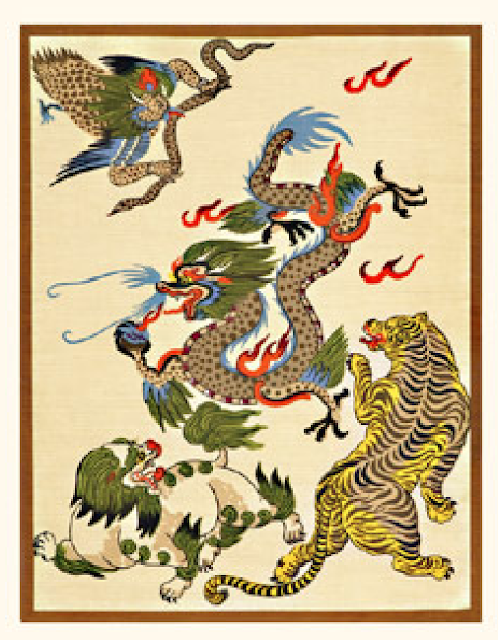 ".....tigers, that fearsome carnivore of eastern Eurasia. These creatures are part of the cultural and artistic heritage of many peoples in the region. Similarly, there is much fascination with tigers in Tibet, a symbol of divine power, martial prowess and magical ability. We shall examine the tiger of Tibet through Tibetan texts, the natural sciences and Upper Tibetan rock art....http://www.tibetarchaeology.com/august-2012/

"A brief introduction to the tiger in Tibetan culture......For a very long time tigers have been the stuff of legends in Tibet. To this day robes trimmed in the skins of the tiger and leopard are considered a desirable embellishment and status symbol. It is written in Bon and Buddhist historical texts that an ancient insignia of superior distinction (rtsigs) was a robe (thul-pa or slag-pa) trimmed in the fur of a tiger (alternatively leopard or clouded leopard skin). Such robes were awarded to valiant warriors and saints alike. According to Bon historical texts such as G.yung drung bon gyi rgyud bum, this tradition endured until the reign of King Trisong Deutsen (Khri-srong lde’u-btsan, 755–797 CE). This text also notes that circa the 5th century CE, Tritsennam (Khri-btsan-nam, Tibet’s 25th king,) and Thothori Nyentsen (Tho-tho-ri gnyan-btsan, the 27th king) presented bon and gshen priests with tiger skin trim and headgear as a badge of courage (che-rtags) for their aid in defeating foreign enemies."......The Dawn of Tibet: The Ancient Civilization on the Roof of the World....By John Vincent Bellezza

"Anyone familiar with the Ling Gesar epic or the cult of mountain deities would have heard of the tiger-skin quiver and leopard-skin bow case. These are stock-in-trade accoutrements of the ancient warrior in Tibet. These men-at-arms carried the appellation ‘tiger-dress hero’ (dpa’-bo stag-chas), and their costumes and weapons were referred to as the ‘equipment of the tiger’ (stag-chas). The greatest exploits of the warrior were epitomized in the phrase: ‘conquering male tigers in their prime’ (skyes-pa stag-’gugs). Like the tiger itself, these military heroes of yore, were given the epithet ‘wild one’ or ‘brave one’ (rgod-po). The proud and imperious swagger of the warrior known as the ‘tiger’s gait’ (stag-’gros) was adopted in wrathful ritual procedures. Tiger Gait is also said to be the secret name of the Bon tutelary deity connected to an ancient sage known as Shebu Rakhuk (Shad-bu ra-khug) and his consort Odenma (’Od-ldan-ma). This couple is recorded as residing in Yakpa (G.yag-pa), a region in the eastern Changthang." 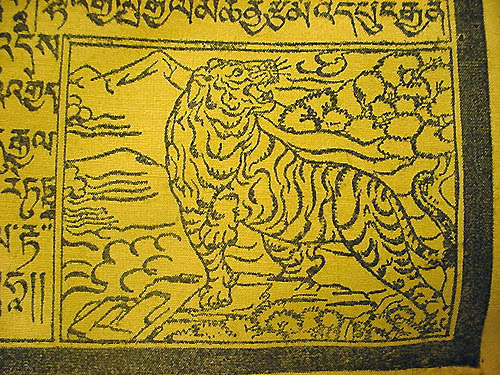 "Given this costumery tradition, it is not surprising that a wide spectrum of indigenous Tibetan deities is clad in tiger skins. Mountain gods, sprites of the earth, personal protective divinities, spirit allies in battle, and many other classes of deities are dressed, in whole or in part, in tiger fur. The use of tiger skins as vestments and other attributes extends to Buddhist deities as well, especially the protectors known generically as chos-skyong. Some of these Buddhist protectors have tigers and other wild felines in their entourages. Certain Tibetan deities are mounted on tigers such as the god of blacksmiths, Damchen Garwa Nakpo (Dam-can mgar-ba nag-po). As in Tibet, in ancient India, the tiger was held in high esteem and crept into many myths, legends and customs."...http://www.tibetarchaeology.com/august-2012/ 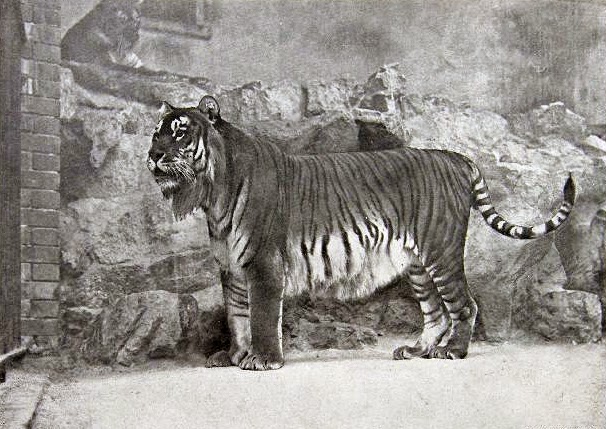 "The Caspian tiger (Panthera tigris virgata), also known as the Hyrcanian tiger, the Mazandaran tiger, the Persian tiger and the Turan tiger, is an extinct tiger subspecies that had been recorded in the wild until the early 1970s, and used to inhabit the sparse forest habitats and riverine corridors west and south of the Caspian Sea, from Turkey, Iran and east through Central Asia into the Takla Makan desert of Xinjiang, China. There are no individuals in captivity.....The Caspian tiger was formerly found in Chinese and Russian Turkestan, Iraq, Afghanistan, Iran, and Turkey.....The Caspian tiger together with the Siberian and Bengal tiger subspecies represented the largest living cat and ranked among the biggest cats that ever existed."....Jackson, P., Nowell, K. (2008). "Panthera tigris ssp. virgata.". IUCN Red List of Threatened Species. Version 2012.2. International Union for Conservation of Nature.

Email ThisBlogThis!Share to TwitterShare to FacebookShare to Pinterest
Labels: Dignities