"Bön itself is a formal religion imported into Tibet, perhaps from an ancient kingdom to the West known as Shang Shung. It is a religion with many scriptures, a definable dogma, and a complete system of metaphysics and meditation practice just like Buddhism. It is true that Bön scriptures mention dralas and other local deities a great deal, but it might be more accurate to say, as the Tibetan anthropologist R.A. Stein did, that the real home of belief in dralas is a religion with no name that constitutes the common occult beliefs of all Tibetans — no matter to what lineage, sect, or system they belong. In fact, Stein called it the “nameless religion……Dralas, or as we sometimes translate them, war gods, are a class of local deities from the non-Buddhist native religious practice of Tibet. If you ask a Tibetan, he or she might very well say that they are Bön deities, because this is the word that Buddhists informally use for non-Buddhist religion in Tibet. That answer, however, would not be strictly accurate. ”….The Thirteen Dralas of Tibet by Robin Kornman

"… the older animist-shamanist religion of Tibet -- the "nameless religion" -- whose practitioners, unbound by formal codes and doctrines, are in direct communication with the spirit world. According to Hoffman (1961) this same form of shamanism was once practiced throughout inner Asia, including Siberia, Turkestan, Mongolia and China. In some isolated Himalayan valleys, it has survived in scarcely altered form to the present day."….…The Nameless Religion: An Overview of Bon Shamanism… 1995… Eileen Kernaghan 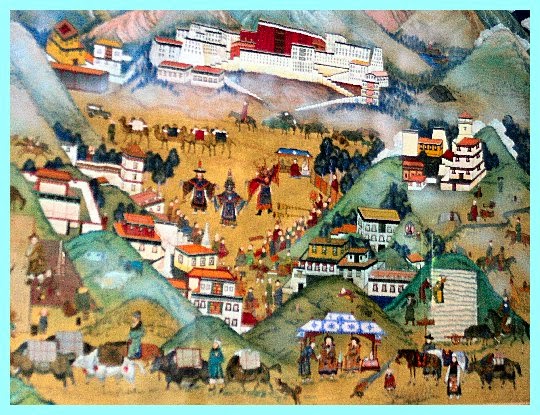 "….the pre-Buddhist religion in Tibet seemed to be entirely concerned with the affairs of this life. "Its purpose is to discover, usually by means of sortilege or astrological calculation, the causes of human ailments and misfortunes, and then to prescribe a suitable cure." The shaman, either through trance or divination, identifies the hostile god or demon that is causing the problem, then effects a cure by offering up a ransom. Sometimes the troublesome spirit was conjured into a device of crossed sticks and coloured threads (still used by Tibetans, and familiar to westerners as a "gods-eye") which trapped him like a bird in a cage. The demon was given his offerings, then thrown away……..Essential to these rites was a lengthy recitation, by the invoking (bon) priest, of ancient myths which described the origin, nature and function of various gods and demons, in order to invoke their aid."…Snellgrove and Richardson, in A Cultural History of Tibet…1968

"Unlike the Buddhists, whose teachings came from India, the Bon claimed that their faith originated in western Tibet (Shang-Shung or Zan-zun) and before that, from the land of sTag- gzigs (possibly pre-Muslim Persia) They honoured as their founder a legendary figure called gShen-rab."

"The great Tibetologist, Giuseppe Tucci, called Tibet's indigenous religious beliefs and practices "the folk religion," for which R.A. Stein adopted the telling designation, "the nameless religion." Just as various Middle-Eastern and European "pagan" beliefs, deities, customs and practices were absorbed into Christianity, so in Tibet many traces of the folk religion still exist, interwoven into Buddhist practices. But besides those popular beliefs, with their local cults and magical rites, another belief system either pre-dated Buddhism in Tibet or co-existed with it, and the relation of those two has been the subject of research and controversy."….

"...there has always existed a vast and somewhat amorphous body of popular beliefs in Tibet, including beliefs in various techniques of divination, the cult of local deities (connected, above all, with certain mountains) and conceptions of the soul....although it is, to a large extent, sanctioned by and integrated into both religions (Buddhism and organized Bon) an appropriate term for it is the one coined by Rolf A. Stein, "the nameless religion"…..Kvaerne, Per. "Bon". Encyclopedia of Religion, Mircea Eliade, General Editor. New York, Macmillan, 1987.

"The indigenous peoples of pre-Buddhist Tibet believed in divine heroes, many of them identified with sacred mountains (bTsan- po or Mighty Ones), a host of local "gods of the soil" or "gods of the place" who lived in rocks, and serpent-gods who lived in streams and springs. Whenever men built houses or tilled the soil, they risked offending these local spirits, who demanded propitiation for the use of their habitats. Otherwise, people would fall ill and die…..The priests who invoked and made offerings to these spirits were known as Bon (probably meaning Invoker) and gShen (Sacrificer). The religion itself was not called Bon, but simply "sacred conventions" or "the pattern of heaven and earth. "Later Tibetan writers as well as some western scholars have referred to this early religion as Bon, but the word never seems to appear with any other meaning but `priest' in really early Tibetan literature. Later on the term `Bon' came to be applied to the new religious developments, which incorporated some old beliefs and a very great deal of Buddhism...." (Snellgrove and Richardson, in A Cultural History of Tibet... 1968: 59)

"….The pari inhabit the high peaks and alpine meadows, regarded by the Hunza people as sacred places. Sidkey tells us, "Night and day, the Hunzakut affirm, one can hear [the voices of the pari] in the howling of the wind, the roar of mountain streams, the thundering echoes of falling rocks, and the creaking of the juniper trees….The pari are beautiful, but far from benevolent. Careless shepherds who allow their flocks to wander into the mountains or damage the alpine meadows are liable to be stricken with altitude sickness, or even swept away by avalanches. If offended, the pari may blight crops, injure livestock, steal children from the villages. Yet at the same time -- if they are correctly propitiated -- they will bestow good luck and prosperity. This propitiation is the responsibility of the bitan -- the shaman who communicates with the pari for the benefit of the whole community…..The Hunza shaman's mortal enemies are the shape-shifting spirits called shiatus or bilas, who lie in wait in graveyards and abandoned places, sometimes hiding inside boulders. Hordes of these demonic spirits may group together to attack the bitan, who must pray to his guardian spirits for protection. Or they may take the shape of a pari in order to trick an inexperienced bitan,, whom they then devour….In these Himalayan mountain spirits -- the tall, golden-haired pari who often appear as birds, and the demonic shiatus -- there is an unmistakable echo of the fairy-like peries and hideous deevs of Persian myth, as well as the shape-shifting good and evil djinns of the Arab world."….Sidky, M.H. "Shamans and Mountain Spirits in Hunza". Asian Folk Studies 53: No.1, 1994.

"Bon. Giuseppe Tucci, David Snellgrove, and other scholars have worked to reconstruct the theology and iconography of early Bon, and have researched the question of Bon's origins, its history, and the extent of its relation to Buddhism. Tucci and other scholars believe that Bon preceded the introduction of Buddhism into Tibet. They identify divination and exorcism as central elements of the indigenous folk religion but also of Bon, and believe that both the folk religion and the more structured Bon contributed to the undeniably shamanistic aspect of Tibetan religious practice and customs. In this view, Bon brought a multiplicity of gods, demons, and spirits of nature into the Tibetan Buddhist pantheon, where they joined the gods absorbed from Indian tantrism. Tucci attributed Bon's formal doctrinal structure to a later borrowing from Buddhism. According to the standard history, Bon vied with Buddhism for dominance during the early centuries after the introduction of the new religion, and during the period between the first and second diffusions. In any case, Buddhism prevailed, but Bon, or some form of it, has survived in parts of Tibet as well as in remote Himalayan areas, such as Dolpo in northwestern Nepal, and there has recently been a Bon revival in the West."….BRIEF INTRODUCTION TO BASIC CONCEPTS OF "TIBETAN" BUDDHISM

"The challenge for Buddhism was to persuade and induce a population who believed their lives were governed by a host of invisible but omnipresent spirits, to accept a highly focused set of teachings involving a relatively abstract mental discipline. Even now, one can speak of Buddhism as it is understood by the women who weed the fields and the men who drive the yaks, a faith heavily imbued with the pre-Buddhist ideas and practices of the folk religion, and of the Buddhism understood and practiced by monks, lamas, and the learned classes, those exposed to Buddhist texts and commentaries and formal teachings….Elements of those indigenous beliefs and practices remain part of Tibetan religious life, existing alongside the liturgy of monks and lamas who expound the texts they hold authentic."….2003 Philip and Marcia R. Lieberman

"…Haarh's description of the pre-Buddhist period as a "blank spot" on the Tibetan map might seem apt when one considers the paucity of archeological and textual evidence available today about pre-Buddhist Tibet. Yet there seems to be a magnetic quality to this lacuna. The "blank spot" has been filled in by the imaginative projections of pioneering Tibetologists, with Shamanism as the label of choice for mapping this territory. "….

"Rolf Stein addresses the problem of locating Tibet's indigenous religion, and how it differs from both Buddhism (or Lamaism) and Bon: "It would be a mistake to suppose, however, that all non-Buddhist elements absorbed by Lamaism in Tibet were indigenous. Tibetan historians themselves have clouded the issue by constantly mixing up two separate points: the fact that Bon was there before Buddhism, and the judgment that everything preceding the latter religion was naturally ‘barbarous', uncivilized and appropriate to an age of darkness. Hence the somewhat oversimplified conclusion drawn by early European students, who tended to present Bon as the primitive religion of Tibet. Further, by equating ‘primitive' with ‘savage,' everything in Lamaism that seemed frightening, twisted and demonic or mediumistic soon came to be regarded as Bonpo and primitive. From that to describing it all as ‘Shamanism' was but a step. The truth is more complex. It is often impossible to tell which of Lamaism's not specifically Buddhist elements is indigenous and which foreign, which one was really Bonpo and which was not." Stein here presents a very clear analysis of European misconceptions of "primitive" Bon and how Buddhist texts have lent support for these misunderstandings….. 79 Giuseppe Tucci, The Religions of Tibet, trans. by Geoffrey Samuel (Berkeley: University of California Press, 1988), pp. 163-212.

Robin Kornman…."Two major sources for this article are my translation of the Gesar of Ling Epic and a book on local Tibetan deities written by René de Nebesky-Wojkowitz, Oracles and Demons of Tibet: The Cult and Iconography of the Tibetan Protective Deities. Many of the lists involve direct quotations from this book. I have also used lists from the bod rgya shan sbyar gyi ge sar tshig bdzod, which is a Tibetan-Chinese dictionary of names from the Gesar epic written by a group under the direction of Thubten Nyima, Zenkar Rinpoche."