"The Dongba, Tomba or Tompa symbols are a system of pictographic glyphs used by the ²dto¹mba (Bon priests) of the Naxi people in southern China. In the Naxi language it is called ²ss ³dgyu 'wood records' or ²lv ³dgyu 'stone records'. "They were developed in approximately the seventh century." The glyphs may be used as rebuses for abstract words which do not have glyphs. Dongba is largely a mnemonic system, and cannot by itself represent the Naxi language; different authors may use the same glyphs with different meanings, and it may be supplemented with the geba syllabary for clarification…..The Dongba script appears to be an independent ancient writing system, though presumably it was created in the environment of older scripts. According to Dongba religious fables, the Dongba script was created by the founder of the Bön religious tradition of Tibet, Tönpa Shenrab (Tibetan: ston pa gshen rab) or Shenrab Miwo (Tibetan: gshen rab mi bo). From Chinese historical documents, it is clear that dongba was used as early as the 7th century, during the early Tang Dynasty. By the Song Dynasty in 10th century, dongba was widely used by the Naxi people. It continues to be used in certain areas; thus, it is the only pictographic language in the world still actively maintained."..……He, Zhiwu (2008). Zhiwu Naxi Study Collection. Beijing: Culture Publisher. ISBN 978-7-105-09099-0.

"The Dongba script is a pictographic writing system used by the Naxi people. In the Naxi language it is called ‘stone records’. Together with the syllabic Geba script and the Latin alphabet, it forms a component of the Naxi script. It is about a thousand years old. The glyphs are pictographic or ideagraphic, but are sometimes used as a rebus. It is a mnemonic system, and cannot by itself represent the Naxi language; different authors may use the same glyphs with different meanings. The script is written on handmade paper, with sheets sewn together at the left edge, forming a book. The pages are ruled horizontally with the ideographs written in three or five sections within these rules."…http://vanbodhi.wordpress.com/category/uncategorized/

"The supreme deity of the Dongba religion is named 'O'….symbolized by a Dongba glyph, also pronounced "o" that takes a shape that is markedly similar to that of a stupa, with a circular base and a roughly conical or pyramidal shape rising to a flat roof"…The Cosmological Origins of Myth and Symbol: From the Dogon and Ancient ...By Laird Scranton

"Dongba Hieroglyphs, and represent a unique form of writing, being in fact the only hieroglyphic writing system still in use today. This writing system of hieroglyphs has been recognized by international academic and cultural circles as a most remarkable world heritage. Naxi Dongba hieroglyphs differ from Chinese characters and may be compared to Egyptian or Mayan hieroglyphs."…http://www.zmnsoft.com/edongba/En/index.htm

"Dongba, the meaning is wise in the Naxi language. They were the highest level intellectuals in ancient times, the majority of set songs, dance, classics, books, history, painting, for a medical, the high status in society, often to engage in religious activity to exorcise, to eliminate of civil disaster, to pray to the gods to bring about human well-being. They were seen as the media for people between to God, and ghost."....

Ceremonial Manuscripts were written by Dongba priests in a pictographic script and contain the entire religion’s corpus in about one thousand ceremonial books. The pictographs represent words or syllables, and script tended to be altered as priests took on their own styles and created their own schools. …..The exhibition will include a number of texts, including those used in divination ceremonies, funerals for those who died at a young age, and ceremonies for honoring spirits of the natural world, among others…..Residing in a remote mountainous region between Tibet and the south-western Chinese provinces of Yunnan and Sichuan, the Naxi and especially their religious art are still relatively unknown. In fact, the thesis Roosevelt wrote as an undergraduate in 1941 remains the only academic thesis on Naxi art in Western and Chinese scholarship. …http://www.dailykos.com/story/2011/07/01/990223/-Rubin-Museum-Young-Explorer-Quentin-Roosevelt-Searched-Art-in-Wartime-China#

"The Nakhi are thought to have come originally from Northwestern China, migrating south toward Tibetan populated regions… the Nakhi settled in the very fertile Baisha and Lijiang areas by the year 3 CE….The dress of the Dongba lamas sometimes resembles that of the Bön priests of Tibet; some dongbas wear conical hats like those of the lamas of the Black Hat sect, with a piece of red cloth…..Dongba religion was rooted in the beliefs of the Tibetan Bön religion; the word "Dongba" literally means "wise man" in the Nakhi language. Historians have traced origins to a Bön shaman from eastern Tibet named Dongba Shilo, who lived in a cave near Baishuitai 900 years ago. According to Nakhi legends, he was said to have created the Lijiang Mural. 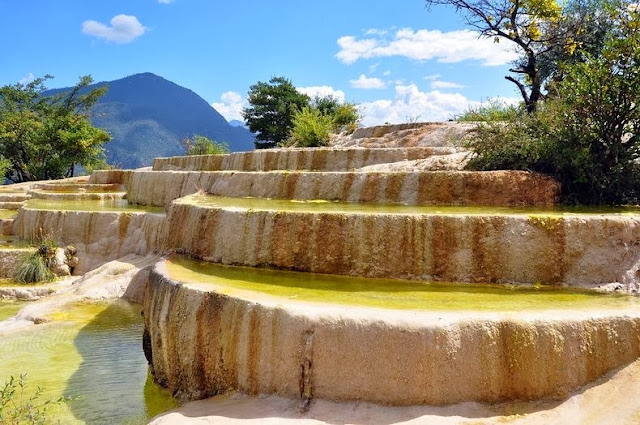 Baishuitai (Chinese: 白水台) is a village between Lijiang and Shangri-La County in northwestern Yunnan province, China. Located slightly north of Haba near the upper Yangtze river valley, it is noted for its natural mineral terraces.

"The Dongba, Tomba or Tompa symbols are a system of pictographic glyphs used by the ²dto¹mba (Bon priests) of the Naxi people in southern China….Dongba script was created by the founder of the Bön religious tradition of Tibet, Tönpa Shenrab (Tibetan: ston pa gshen rab) or Shenrab Miwo (Tibetan: gshen rab mi bo). From Chinese historical documents, it is clear that dongba was used as early as the 7th century,

"DONGBA SCRIPT……The pictographic script of the Naxi is over a thousand years old and consists of around 1400 individual pictographs. The script is reminiscent of the hieroglyphic scripts of earlier cultures and is perhaps the only pictographic script left in the world which survives true to its original form and which can still be written and read. However, the pictographs are not related directly to the spoken language of the Naxi. Instead the script is used to recount the myths and legends, religious beliefs and history of the Naxi, and acts as a guide for the rituals:
Long, long ago the host family made a sacrifice to the Gods, to the War God Iouma, to the Nature God Shu, to the Dongba God and to the Lerjiu God.
The white bat called out from the God's mountain: "Ancestor God Dongba Shilo, please conduct the sacrificial ceremony!"
O Gods, descend on the Black Dragon and the White Tiger, we beseech you, come and fight the Demons. Xiuqu, Bird God, please come!
The God Laulasha, the God of the Bai People and the Nature God Shu, come hither! As the eagle catches the bird and the cheetah the dog, so the Gods will destroy the Demons.
http://www.peopleandplaces.de/english/dongba_schrift_english.htm