The instruction of the Kalamas (Kalama Sutta) is justly famous for its encouragement of free inquiry; the spirit of the sutta signifies a teaching that is exempt from fanaticism, bigotry, dogmatism, and intolerance. 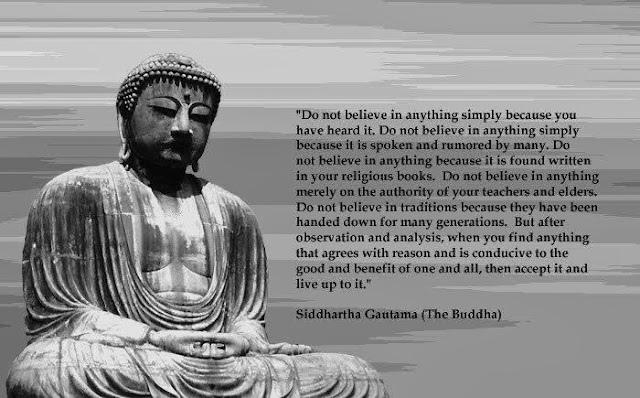 Kalama Sutta Summary….
The people of Kalama asked the Buddha who to believe out of all the ascetics, sages, venerables, and holy ones who, like himself, passed through their town. They complained that they were confused by the many contradictions they discovered in what they heard. The Kalama Sutta is the Buddha's reply:
Do not believe anything on mere hearsay.
Do not believe in traditions merely because they are old and have been handed down for many generations and in many places.
Do not believe anything on account of rumors or because people talk a a great deal about it.
Do not believe anything because you are shown the written testimony of some ancient sage.
Do not believe in what you have fancied, thinking that, because it is extraordinary, it must have been inspired by a god or other wonderful being.
Do not believe anything merely because presumption is in its favor, or because the custom of many years inclines you to take it as true.
Do not believe anything merely on the authority of your teachers and priests.
But, whatever, after thorough investigation and reflection, you find to agree with reason and experience, as conducive to the good and benefit of one and all and of the world at large, accept only that as true, and shape your life in accordance with it.
The same text, said the Buddha, must be applied to his own teachings.
Do not accept any doctrine from reverence, but first try it as gold is tried by fire.
http://www.ling.upenn.edu/~beatrice/buddhist-practice/kalama-sutta.html

"The Kālāma Sutta (also known as the Kālām Sutta; Sanskrit: Kālāma Sūtra; Burmese: Kalama thoke; Thai: กาลามสูตร, Kalama Sut, or Kesamutti Sutta; Pāli: Kesamuttisuttaṃ; Burmese: Kethamotti thoke), is a discourse of the Buddha contained in the Aṅguttara Nikaya of the Tipiṭaka. It is often cited by those of the Theravada and Mahayana traditions alike as the Buddha's "charter of free inquiry."….The Kālāma Sutta is also used for advocating prudence by the use of sound logical reasoning arguments and the dialectic principles for inquiries in the practice that relates to the discipline of seeking truth, wisdom and knowledge whether it is religious or not. In short, the Kālāma Sutta is opposed to blind faith, dogmatism and belief spawned from specious reasoning."…Kalama Sutta, The Buddha's Charter of Free Inquiry" by Soma Thera 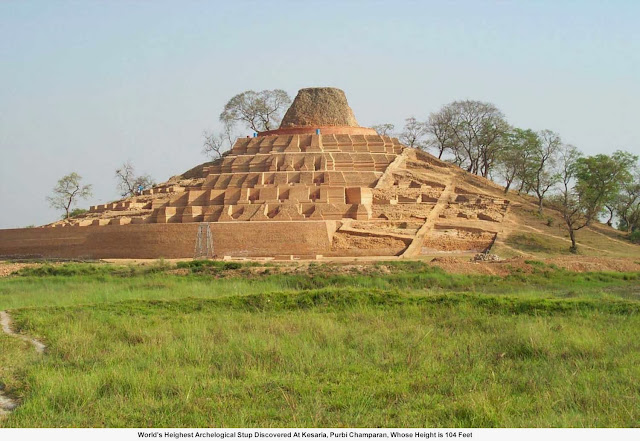 "Kesaria claims the tallest and the largest Buddhist Stupa in the world. The stupa was discovered in 1998 during an excavation by the Archaeological Survey of India….. The stupa dates to between 200 AD and 750 AD and may have been associated with the 4th century ruler, Raja Chakravarti (Sanskrit: King of Kings).….The inhabitants of Kesariya were the Kosalans and the Kalamas."

"The Kalama Sutta that has been passed down to us is derived from a teaching that was part of an oral tradition. The teaching was originally delivered to people who had not yet begun to use writing for anything other than recording financial transactions, and it was structured so that those who heard it—not the Kalamas so much as the sangha of monks who were also listening—could remember it easily and repeat it to others. The Pali text, like most of the texts of most suttas in the Pali Canon, is very repetitive, and the Buddha uses exactly the same terms for every repetition of an idea—the idea, for instance, that there were 10 things (tradition, lineage, hearsay, scripture, etc.) in which you could not place your trust, or the idea that each of several particular qualities is wholesome or unwholesome, reprehensible or praiseworthy, condemned or approved by the wise, etc."….http://dharmastudy.org/suttas/kalama/

"Kesariya is a town in Bihar, India in the district of East Champaran, near Rampur Khajuria. It is the site of a stupa built by the King Ashoka. It is one of, if not the largest stupa in India. The Buddha once stayed in Kesariya (then called "Kesaputta"). On that occasion, he preached the Kesaputtiya Suttas (a group of sutras preached to the Kalamas of Kesaputta - A.i.188), which include the Kalama Sutta. The inhabitants of Kesariya were the Kosalans and the Kalamas."….Kesaria claims the tallest and the largest Buddhist Stupa in the world. The stupa was discovered in 1998 during an excavation by the Archaeological Survey of India. The stupa dates to between 200 AD and 750 AD and may have been associated with the 4th century ruler, Raja Chakravarti….