Mushin no shin & gZhi … No Mind & Ground of Being

"Mushin no shin (無心の心), a Zen expression meaning the mind without mind and is also referred to as the state of "no-mindness". That is, a mind not fixed or occupied by thought or emotion and thus open to everything….Mushin is achieved when a person's mind is free from thoughts of anger, fear, or ego during everyday life. There is an absence of discursive thought and judgment, so the person is totally free to act and react…..Some masters believe that mushin is the state where a person finally understands the uselessness of techniques and becomes truly free to move. In fact, that person will …consider themselves merely living beings moving through space…..The legendary Zen master Takuan Sōhō said:…The mind must always be in the state of 'flowing,' for when it stops anywhere that means the flow is interrupted and it is this interruption that is injurious to the well-being of the mind."

Ground of Being (Dzogchen)…..Ground [of Being] (āśraya; Tibetan: གཞི, Wylie: gzhi; Chinese: 基 (Pinyin: Ji); Korean 의지 (ŭiji); Japanese:エジ (eji))…. is an essential component of the Dzogchen tradition for both the Bonpo and the Nyingmapa…. It is a seminal conceptual point and focus of praxis foregrounded in the Dzogchen literature and practice lineages and may be apprised as a memetic conduit for the mindstream to enter into the concept-less Dzogchen nondual 'awareness', 'rigpa' (Wylie: rig pa; : vidyā), Dzogchen-as-process where the praxis albeit 'natural' (Wylie: lhan skyes; IAST: sahaja) and 'effortless' (Wylie: lhun grub; : anābhoga) has the sense of 'spontaneity'."….

"The “egolessness” of which Sugimoto spoke is the well-known Japanese Zen term muga (lit. no-self). In his book Zen and Japanese Culture, D. T. Suzuki identified muga as being identical with not only musō (no-reflection) and munen (no-thought), but also mushin (no-mind).19 About these latter terms, Suzuki had this to say: Mushin [wu-hsin] or munen [wu-nien] is one of the most important ideas in Zen…. Enō (Hui- neng), the sixth patriarch of Zen, emphasizes munen (or mushin) as the most essential element in the study of Zen. When it is attained, a man becomes a Zen-man…."…http://www.khamkoo.com/uploads/9/0/0/4/9004485/buddhist_warfare.pdf

"Ground of Being" is how the Tibetan term gzhi (Wylie) has been given an English gloss by Lipman (c. 1984) and Barron (1998) in his rendering of the Nelug Dzö of Longchenpa (1308–1364 or possibly 1369) follows Lipman's lead. That said, it is important that Ground of Being does not become naturalized for gzhi (Wylie) and instituted as the ascendant rendering in English"….http://en.wikipedia.org/wiki/Ground_of_Being_(Dzogchen)#cite_ref-1

"In Tibetan Buddhism and Bön, Menngagde (Wylie: man ngag sde, Tib. མན་ངག་སྡེ; THDL phonetics: men-ngak-dé), (Sanskrit: upadeshavarga), is the name of one of three scriptural and lineage divisions within Dzogchen, (Skt. Atiyoga, Great Perfection) teachings. Dzogchen is itself the pinnacle of the ninefold division of practice according to the Nyingma school of Tibetan Buddhism. Menngagde focuses on the knowledge of trekchö and the basis (gzhi). Menngagde is also variously glossed as "Secret oral instruction division", "Secret oral instruction series," "Secret oral school", or "Quintessential Instructions Series", or "The Category of Direct Transmission"…. http://www.rigpawiki.org/index.php?title=Mengakd%C3%A9

"From the perspective of Dzogchen, the ultimate nature of all sentient beings is said to be pure, all-encompassing, primordial clarity or naturally occurring timeless clarity. This intrinsic clarity has no form of its own and yet is capable of perceiving, experiencing, reflecting, or expressing all form. It does so without being affected by those forms in any ultimate, permanent way. The analogy given by Dzogchen masters is that one's nature is like a mirror which reflects with complete openness but is not affected by the reflections, or like a crystal ball that takes on the colour of the material on which it is placed without itself being changed. The knowledge that ensues from recognizing this mirror-like clarity (which cannot be found by searching nor identified) is what Dzogchenpas refer to as rigpa."…Namdak, Tenzin. Bonpo Dzogchen Teachings. Vajra Publications 2006

"Ordinary Mind…..The actual point of all our efforts on the spiritual path, whether we are studying, meditating, or engaged in socially oriented activities, is to return to the genuine state of our mind, the inherent state of wakefulness, which is very simple and completely ordinary. This is the goal of all three vehicles, or yanas, of the Buddhist path…..The Hinayana school calls this state egolessness, selflessness, or emptiness. The Mahayana school calls it the great emptiness, or shunyata, freedom from all elaborations, all conceptuality. It is also known as the emptiness endowed with the essence of compassion, or as bodhichitta, the union of emptiness with the qualities of compassion and loving-kindness. Further, it is known as buddhanature or tathagatagarbha, the essence of all the buddhas, the “thus gone ones.” In the Vajrayana, it is called the vajra nature, or sometimes the vajra mind or heart, which refers to the indestructible quality of awareness. In Mahamudra, it is called ordinary mind, or thamal gyi shepa, and in Dzogchen, it is called bare awareness, or rigpa. The meanings of all these terms point to the most fundamental reality of our mind and phenomena, which is luminous emptiness. All is empty yet appears, appears yet is empty."….http://www.shambhalasun.com….This Very Mind, Empty and Luminous…by The Dzogchen Ponlop Rinpoche 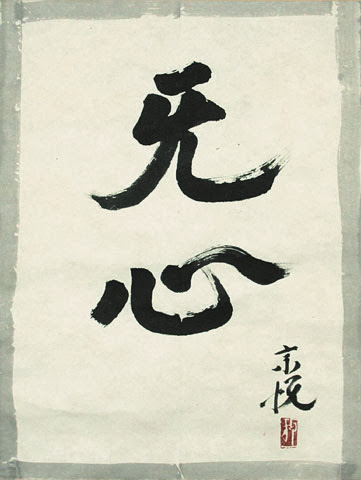 " Shikantaza…..One way to categorize the meditation practice of shikan taza, or "just sitting," is as an objectless meditation. This is a definition in terms of what it is not. One just sits, not concentrating on any particular object of awareness, unlike most traditional meditation practices, Buddhist and non-Buddhist, that involve intent focus on a particular object. Such objects traditionally have included colored disks, candle flames, various aspects of breath, incantations, ambient sound, physical sensations or postures, spiritual figures, mandalas including geometric arrangements of such figures, or of symbols representing them, teaching stories, or key phrases from such stories. Some of these concentration practices are in the background of the shikan taza practice tradition, or have been included with shikan taza in its actual lived experience by practitioners……But objectless meditation focuses on clear, non-judgmental, panoramic attention to all of the myriad arising phenomena in the present experience. Such objectless meditation is a potential universally available to conscious beings, and has been expressed at various times in history. This just sitting is not a meditation technique or practice, or any thing at all. "Just sitting" is a verb rather than a noun, the dynamic activity of being fully present."….The Art of Just Sitting, edited by Daido Loori, Wisdom Publications, 2002

"āśraya आश्रय….Buddhist….the five organs of sense with manas - or mind (the six together being the recipients of the āśrita - or objects which enter them by way of their ālambana - or qualities."…http://sanskritdictionary.com/