The Fifth Book of Tantra….The Anvár-i Suhailí….was translated into Middle Persian in 570 AD and into Arabic in 750 AD….

“The Panchatantra (IAST: Pañcatantra, Sanskrit: पञ्चतन्त्र, 'Five Principles or Techniques') is an ancient Indian inter-related collection of animal fables in verse and prose, in a frame story format. The original Sanskrit work, which some scholars believe was composed in the 3rd century BCE, is attributed to Vishnu Sharma. It is based on older oral traditions, including "animal fables that are as old as we are able to imagine". It is "certainly the most frequently translated literary product of India", and these stories are among the most widely known in the world….. It was translated into Middle Persian in 570 CE by Borzūya. This became the basis for a Syriac translation as Kalilag and Damnag and a translation into Arabic in 750 CE by Persian scholar Abdullah Ibn al-Muqaffa as Kalīlah wa Dimnah (Arabic: كليلة ودمنة‎). ……A New Persian version from the 12th century became known as Kalīleh o Demneh (Persian: کلیله و دمنه‎) and this was the basis of Kashefi's 15th century Anvār-e Soheylī.. (Persian: انوار سهیلی‎, 'The Lights of Canopus'). The book in different form is also known as The Fables of Bidpai (or Pilpai, in various European languages) or The Morall Philosophie of Doni (English, 1570).”

“Borzuya (or Burzōē or Burzōy) was a Persian physician in the late Sassanid era, at the time of Khosrau I. He translated the Indian Panchatantra from Sanskrit into Pahlavi. But both his translation and the original Sanskrit version he worked from are lost. Before their loss, however, his Pahlavi version was translated into Arabic by Ibn al-Muqaffa under the title of Kalila and Dimna or The Fables of Bidpai and became the greatest prose of Classical Arabic. The book contains fables in which animals interact in complex ways to convey teachings to princes in policy.” 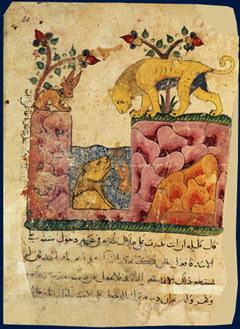 “Ibn al-Muqaffa, though a resident of Basra, was originally from the town of Jur (or Gur, Firuzabad, Fars) in the Iranian province of Fars. … Ibn al-Muqaffa was murdered around 756 by the order of the second Abbasid caliph Abu Ja`far al-Mansur reportedly for heresy, in particular for attempting to import Zoroastrian ideas into Islam….. Ibn al-Muqaffa's translation of the Kalīla wa Dimna from Middle Persian "is considered the first masterpiece of Arabic literary prose." "Ibn al-Muqaffa' was a pioneer in the introduction of literary prose narrative to Arabic literature. He paved the way for later innovators such as al-Hamadani and al-Saraqusti, who brought literary fiction to Arabic literature by adapting traditionally accepted modes of oral narrative transmission into literary prose." Ibn al-Muqaffa was also an accomplished scholar of Middle Persian, and was the author of several moral fables.”

“….Kalīla wa Dimna :his translation of a Middle Persian collection of animal fables, mostly of Indian origin, involving two jackals, Kalīla and Demna. The Middle Persian original, now lost but thought have been entitled Karīrak ud Damanak was written by one Borzōē/Borzūya, a Persian physician attached to the Sasanian court in the 6th century. Prefaced by a putative autobiography of Borzūya and an account of his voyage to India, the full work was done into Arabic by Ibn al-Muqaffa', who introduced it with a prologue of his own and may have been responsible for four added stories. From Ebn al-Moqaffaʿ’s Arabic rendering of Borzūya’s work are descended not only all later Arabic versions of Kalīla wa Demna, but also one of two Syriac versions (the other one is pre-Islamic ) and the medieval Greek, Persian (6th/12th century), Hebrew, Latin, and Castilian versions. Though there are many Arabic manuscripts of Kalīla wa Demna, Ibn al-Muqaffa'’s version is not among them, and the oldest dated copy was written almost five centuries after his death. That he aimed at an idiomatic rather than a slavishly literal rendering is generally agreed, and all indications are that he achieved clarity of expression by simplicity of diction and plain syntactical structures. As no medieval Arab critic seems to have impugned his style, it was evidently pleasing and well suited to the taste of his Arab readers.”

“Ibn al-Muqaffa'’s translation of Kalīla wa Demna was not a conscious attempt to start a new literary trend; it was clearly just one of several works of old Sasanian court literature which Ibn al-Muqaffa' introduced to an exclusive readership within court circles, its function being to illustrate what should or should not be done by those aiming at political and social success. Kalīla wa Demna, nonetheless, served as a stimulus to the development of Arabic prose literature and inspired imitators, artists, and poets. A prose Persian translation of the Arabic text was available as early as the 10th century, of which a versified version was made by Rudaki (d.941-42). Both versions are lost except for a few lines of Rūdakī’s poem preserved in other sources. A later prose translation was rendered by Abu’l-Maʿālī Nasr-Allāh Ibn Mohammad Shirazi and dedicated to the Ghaznavid Bahramshah.”

Khwaday-Namag :Ibn al-Muqaffa' is thought to have produced an Arabic adaptation of the late Sasanian Khwaday-Namag, a chronicle of pre-Islamic Persian kings, princes, and warriors. A mixture of legend, myth, and fact, it served as a quasi-national history inspired by a vision of kingship as a well-ordered autocracy with a sacred duty to rule and to regulate its subjects’ conduct within a rigid class system. Interspersed with maxims characteristic of andarz literature, the narrative also offered practical advice on civil and military matters. Ibn al-Muqaffa' is known to have modified certain parts of the original and excluded others, possibly to make it intelligible to his Arab Muslim readers. He is thought to have inserted an account of Mazdak, from which later Perso-Arab historians derived much of their knowledge of the Mazdakite movement. Like its Middle Persian original, Ibn al-Muqaffa'’s Arabic version is not extant. The Oyun al-akhbar and the Ketab al-maʿaref of Ibn Qutayba (d.889) may preserve fragments of it; certainly the Sīar al-ʿAjam, quoted by Ibn Qutayba without ascription, renders the Khwaday-Namag.”

“In 1582 the Mughal emperor Akbar underwrote a Persian translation of the Sanskrit Mahabharata, thus transforming the great Indian epic into a Mughal courtly text. Thec ourt poured many resources into producing the translation, and the resulting text,called the Razmnamah (Book of War)….remained a seminal literary work in Mughal circles for decades. While scholars have long been aware of the Razmnamah and its centrality to Mughal literary culture, few have seriously treated the textual content of this translation.” ……The Mughal Book of War: A Persian Translation of the Sanskrit Mahabharatamore…..by Audrey Truschke

“Khosrau I (also called Chosroes I and Kasra, known in Persian as Anooshiravan or Anushirvan or Anushirwan, Persian: انوشيروان, a-nushak ravan, meaning the undiminishing soul), also known as Anushirawan the Just (انوشيروان دادگر, Anushiravān-e-dādgar) (501 - 579 AD)…was the successor of his father Kavadh I (488–531) on the Sasanian Persian throne. Khosrau I was the twenty-second Sasanian Emperor (Persian: Shahanshah, Great King) of Persia, and the most famous and celebrated of the Sasanian kings….Under his reign the famous book Panchatantra (Kalilah and Dimnah) was translated….Khosrau I represents the epitome of the philosopher king in the Sasanian Empire…..His reforms and military campaigns marked a renaissance of the Sassanian Empire, which spread philosophic beliefs as well as trade goods from the far east to the far west…’We have not rejected anyone because they belonged to a different religion or people…’….Khosrau made many translations of texts from Greek, Sanskrit, and Syriac into Middle Persian…He received the title of “Plato's Philosopher King” by the Greek refugees that he allowed into his empire because of his great interest in Platonic philosophy. ”….Frye, Richard. “The History of Ancient Iran.”

“John Myrdhin Reynolds (Vajranatha) has pointed out in his book on Dzogchen The Golden Letters, via the Foreword (p 15) by Namkhai Norbu Rinpoche, and also through oral communication from Bon Master Lopon Tenzin Namdak, that many old Bon texts, including the Bonpo Mother Tantra, were originally translated from the ancient Persian dialect Pahlavi, (now known as Farsi), and that Tonpa Shenrab Miwoche, traditionally cited as the founder of Bon, is said to have come from Tazig, a Pahlavi-speaking area of Central Asia…..On javanmardi, also known as futuwwah, see Ibn al-Husayn al-Sulami, 1991. The Way of Sufi Chivalry, Inner Traditions, Rochester. This illustration was not chosen at random:…..”…..http://www.buddhistgeeks.com/2010/05/maha-ati-natural-liberation-through-primordial-awareness/

“Within the Bon tradition, there are three cycles of Mother Tantras: Outer, Inner, and Secret. For each, there is a root text or texts with a body of exegetical and liturgical works subordinate to the root text. ….

“Indo-Iranian, with languages spoken from India through Pakistan and Afghanistan to Iran and Kurdish areas of Iraq and Turkey…..The Indo-Iranian languages, also known as the Aryan languages, constitute the easternmost extant branch of the Indo-European language family. It is also the largest branch, with more than 1 billion speakers stretching from Europe (Romani) and the Caucasus (Ossetian) eastward to Xinjiang (Sarikoli) and Assam (Assamese) and south to Sri Lanka (Sinhalese)…..The oldest attested Indo-Iranian languages are Vedic Sanskrit (ancient Indo-Aryan), Older and Younger Avestan and Old Persian (ancient Iranian languages). A few words from a fourth language (very closely related to Indo-Aryan///“

“THE ORIGIN OF TIBETAN WRITING……The Tibetan scripts that are in use today came into existence 1,300 years ago when a script known as the Pungyig (spungs yig) of Persia appeared in the country of Zhangzhung, in Ngari. …..

Cosmopolitan Encounters: Sanskrit and Persian at the Mughal Court, by Audrey Truschke…..”… a detailed account of encounters between Sanskrit-Persian scholars, texts and ideas in the Mughal imperial court from the late sixteenth to the mid-seventeenth centuries. She analyzes a wide array of both Sanskrit and Persian texts that reflect on and are produced by cross-cultural interaction”…..http://dissertationreviews.org/archives/2350

The Nyaishes; Or Zoroastrian Litanies, Avestan Text with the Pahlavi, Sanskrit, Persian and Gujarati Versions…. by Maneckji Nusservanji Dhalla

“….workshop on "Encounters Between Early Modern Sanskrit and Persian Cultures" …. focuses on relationships between Sanskrit and Persian scholastic and courtly cultures in the 16th, 17th and 18th centuries. Despite the intense, sustained engagement between Sanskrit and Persian intellectuals during this period, evidence of translation, adaptation, borrowing, influence, and debate is little known outside specialist scholarly circles…..groups of Sanskrit and Persian specialists will work together on specific passages from corresponding texts (including the Mahabharata/Razmnamah, Yogavasistha/Muntakhab-i Jug Basisht, Ratirahasya/Lizzat al-nisa, and Siddhantasarvaraja/Zij-i Shah Jahani). Current and future areas of research include Persian translations at the Mughal court, Arabic, Persian, and Sanskrit astronomy and mathematics, historiographic narratives, Sufi-Hindu dialogues, and animal fables in Sanskrit, Persian, Pahlavi, and Arabic.”….http://www1.utm.utoronto.ca/sanskritpersian/