“The Church of the East (Syriac:Ē(d)tāʾ d-Maḏn(ə)ḥāʾ), also known as the Nestorian Church, is a Christian church, part of the Syriac tradition of Eastern Christianity. The church of the Persian Sassanid Empire, it quickly spread widely through Asia. Between the 9th and 14th centuries it was the world's largest Christian church in terms of geographical extent, with dioceses stretching from the Mediterranean to China and India….The church grew rapidly under the Sassanids, and following the Islamic conquest of Persia, it was designated as a protected dhimmi community under Muslim rule. From the 6th century, it expanded greatly, establishing ties with the Saint Thomas Christian community which existed in India, having evangelical success among the Mongol tribes in Central Asia, and China, which was home to a thriving Nestorian community under the Tang Dynasty from the 7th to the 9th century. In the 13th and 14th century the church experienced a final period of expansion under the Mongol Empire, which had influential Nestorian Christians in the Mongol court.”

“Prester John (also Presbyter Johannes) legends told of a Christian patriarch and king said to rule over a Christian nation lost amidst the Muslims and pagans in the Orient…. Prester John was reportedly a descendant of one of the Three Magi, said to be a generous ruler and a virtuous man, presiding over a realm full of riches….in which the Patriarch of the Saint Thomas Christians resided. His kingdom contained such marvels as the Gates of Alexander and the Fountain of Youth, and even bordered the Earthly Paradise. Among his treasures was a mirror through which every province could be seen, the fabled original from which the "speculum literature" of the late Middle Ages and Renaissance was derived, in which the prince's realms were surveyed and his duties laid out…….At first, Prester John was imagined to reside in India; tales of the Nestorian Christians' evangelistic success there and of Thomas the Apostle's subcontinental travels as documented in works like the Acts of Thomas probably provided the first seeds of the legend. After the coming of the Mongols to the Western world, accounts placed the king in Central Asia…. Prester John's kingdom was thus the object of a quest, firing the imaginations of generations of adventurers, but remaining out of reach. He was a symbol to European Christians of the Church's universality, transcending culture and geography to encompass all humanity, in a time when ethnic and inter-religious tension made such a vision seem distant.” 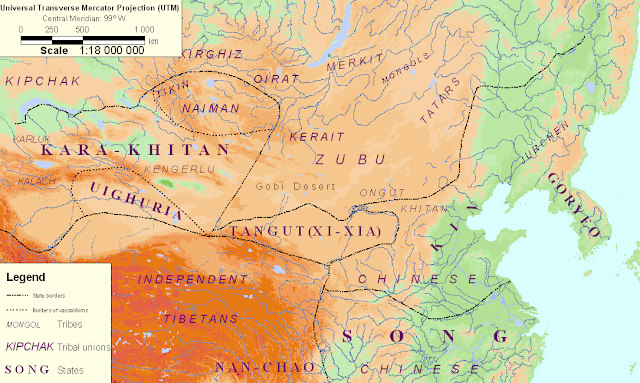 Map: Middle Asia in the Twelfth Century….Gumilev L.N., Searches for an Imaginary Kingdom: The Legend of the Kingdom of Prester John (Cambridge University Press. 1988)

“In 1271 young Marco Polo traveled across the Asian continent to China in the company of his father and uncle who were Venetian merchants. They journeyed extensively in Asia and for the next 20 years they worked for the Great Khan…..The first reference to Prester John is made quite early in The Travels and it is clear from the outset that he does not correspond with the figure of popular myth. Marco Polo clearly identifies the famous priest-king with an Asian warlord who had ruled over the Tartars as he writes, "(the Tartars) were actually tributary to a great lord who was called in their language Ung Khan, which simply means Great Lord. This was that Prester John, of whose empire all the world speaks."

“Thomas the Apostle, was one of the Twelve Apostles of Jesus Christ, according to the New Testament. He is best known from the account in the Gospel of Saint John, where he questioned Jesus' resurrection when first told of it, followed by his confession of faith as both "My Lord and my God" on seeing and touching Jesus' wounded body…..Traditionally, he is said to have traveled outside the Roman Empire to preach the Gospel, traveling as far as India….. According to tradition, the Apostle reached Muziris, India in 52 AD and baptized several people who are today known as Saint Thomas Christians or Nasranis. After his death, the reputed relics of Saint Thomas the Apostle were enshrined as far as Mesopotamia in the 3rd century, and later moved to various places. In 1258, some of the relics were brought to Abruzzo in Ortona, Italy, where they have been held in the Church of Saint Thomas the Apostle. He is often regarded as the Patron Saint of India, and the name Thomas remains quite popular among Saint Thomas Christians of India.”

“Tibetan Christians…..The best evidence of the involvement of Christian missionaries in early Tibet comes in the letters of Timothy I, who was Patriarch of the Nestorian Church between 780 and 823, overlapping with the reigns of three of Tibet’s great Buddhist emperors, Trisong Detsen, Senaleg and Ralpachen. Timothy I’s letters contain a couple of references to Tibet. In one letter, he lists the lands in which the Trisagion, one of the oldest Christian prayers, is recited. This list includes Tibet. In another letter, Timothy relates that he has recently appointed a metropolitan bishop for the Turks, and is about to do the same for the Tibetans. These references both date to the early 790s, during Trisong Detsen’s reign.”

“Nestorianism is a Christological doctrine advanced by Nestorius, Patriarch of Constantinople from 428–431. The doctrine, which was informed by Nestorius' studies under Theodore of Mopsuestia at the School of Antioch, emphasizes the disunion between the human and divine natures of Jesus. Nestorius' teachings brought him into conflict with some other prominent church leaders, most notably Cyril of Alexandria, who criticized especially his rejection of the title Theotokos ("Bringer forth of God") for the Virgin Mary. Nestorius and his teachings were eventually condemned as heretical at the First Council of Ephesus in 431 and the Council of Chalcedon in 451, leading to the Nestorian Schism in which churches supporting Nestorius broke with the rest of the Christian Church. Afterward many of Nestorius' supporters relocated to Sassanid Persia, where they affiliated with the local Christian community, known as the Church of the East. Over the next decades the Church of the East became increasingly Nestorian in doctrine, leading it to be known alternately as the Nestorian Church.”

“Missionaries entered Central Asia and had significant success converting local Turkic tribes. Nestorian missionaries were firmly established in China during the early part of the Tang Dynasty (618–907); the Chinese source known as the Nestorian Stele records a mission under a Persian proselyte named Alopen as introducing Nestorian Christianity to China in 635. Following the Muslim conquest of Persia, completed in 644, the Persian Church became a protected dhimmi community under the Rashidun Caliphate. The church and its communities abroad flourished under the Caliphate; by the 10th century it had fifteen metropolitan sees within the Caliphate's territories, and another five elsewhere, including in China and India.”…. 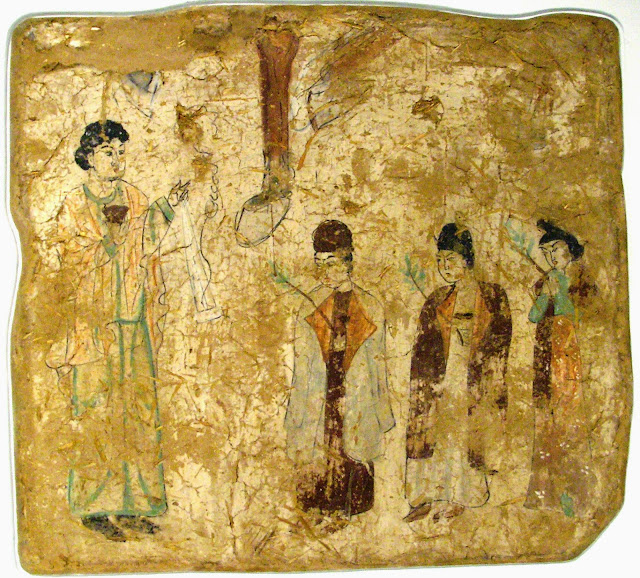 Nestorian priests in a procession on Palm Sunday, in a 7th- or 8th-century wall painting from a Nestorian church in Qocho, China

“Nestorianism is a form of dyophysitism, and can be seen as the antithesis to monophysitism, which emerged in reaction to Nestorianism. Where Nestorianism holds that Christ had two loosely-united natures, divine and human, monophysitism holds that he had but a single nature, his human nature being absorbed into his divinity. A brief definition of Nestorian Christology can be given as: "Jesus Christ, who is not identical with the Son but personally united with the Son, who lives in him, is one hypostasis and one nature: human." Both Nestorianism and monophysitism were condemned as heretical at the Council of Chalcedon. Monophysitism survived and developed into the Miaphysitism of the modern Oriental Orthodox churches.”

“Following the exodus to Persia, scholars expanded on the teachings of Nestorius and his mentors, particularly after the relocation of the School of Edessa to the Persian city of Nisibis in 489 (where it became known as the School of Nisibis). Nestorianism never again became prominent in the Roman Empire or later Europe, though the diffusion of the Church of the East in and after the 7th century spread it widely across Asia. But not all churches affiliated with the Church of the East appear to have followed Nestorian Christology; indeed, the modern Assyrian Church of the East, which reveres Nestorius, does not follow all historically Nestorian doctrine….By the end of the fourteenth century, however, the Nestorian and other churches—which at one time had dotted the landscape of all of Central and even parts of East Asia—were all but wiped out. Isolated pockets of Christianity survived only in India.”….Bosch, David J. (1999). Transforming mission. Maryknoll: Orbis Books. p. 204.