"February 2014……"The Pakistani Taliban have announced an "armed struggle" against an indigenous tribe and Ismaili Muslims in the picturesque northern Chitral valley, calling on Sunnis to support their cause in a video…..The valley was once dominated by moderate Ismailis and is also home to the Kalash, a polytheistic people who claim descent from Alexander the Great and who have maintained separate cultural traditions in the predominantly Muslim country."……http://www.theguardian.com/global/2014/feb/13/pakistan-taliban-video-warning-chitral-valley

"February 2014……The Kalash people of Pakistan were found to have chunks of DNA from an ancient European population. Statistical analysis suggests a mixing event before 210 B.C., possibly from the army of Alexander the Great."…..http://www.nytimes.com/2014/02/14/science/tracing-ancestry-team-produces-genetic-atlas-of-human-mixing-events.html?_r=0 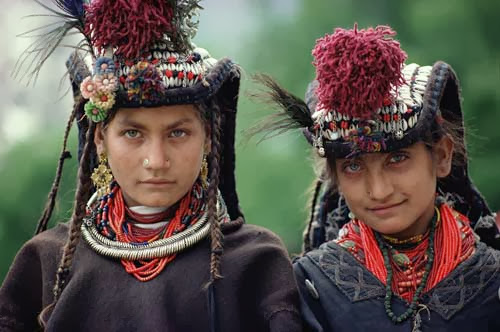 The Kalasha of Chitral….. Kalasha (Kalasha: Kaĺaśa, Nuristani: Kasivo) or Kalash, are a Dardic indigenous people residing in the Chitral District of Khyber-Pakhtunkhwa province of Pakistan. They speak the Kalasha language, from the Dardic family of the Indo-Aryan branch, and are considered a unique tribe among the Indo-Aryan peoples of Pakistan.
Total population…….ca. 4,100
Chitral District, Pakistan
Languages: Kalashamondr….Urdu and Pashto as second languages
Religion: Kalash Religion, Islam
Related ethnic groups:Nuristani


"History contains references to "Siah-Posh Kafirs"……Alexander the Great encountered them….Siah-Posh (black-Robed) Kafirs was the former designation of the major and dominant group of the Hindu Kush Kafirs inhabiting the Bashgul (Kam) valley of the Kafiristan, now called Nuristan. They were so-called because of the color of the robes they wore. They were distinguished from the Sped-Posh (white-robed) Kafirs (sometimes also called Lal-Posh or Red robed) by reason of the color of their dress as also because of their language, customs and other characteristics. The Siah-Posh Kafirs (Nuristanis) have sometimes been erroneously confused with Kalasha people, though they are not directly related to the Kalash of the neighboring Chitral Province in Pakistan."…. 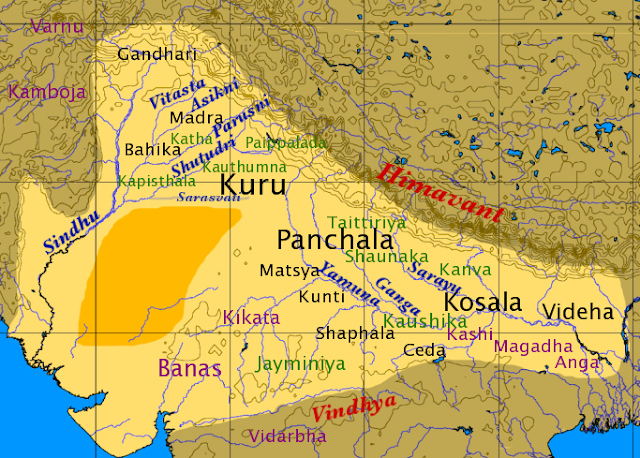 "Racial Origin……Some earlier writers had speculated and propagated the myth that the Kafirs of Hindukush may have descended from the army of Alexander the Great. The Pakistani Tourist Bureau still continues to propagate that the peoples in the mountains are descendants of soldiers from the army of Alexander but Greek descent of Kafirs has been discounted by H. W. Bellew, George Scott Robertson and many later scholars…… However many other scholars do believe in the authenticity of this tale that the Kalash themselves claim as being descedants of Alexander's army. This list of scholars who propagate the Kalash's ancestry claim is true includes Sir George Scott Robertson, and Eric S. Margolis."…..

"The neighboring Nuristani people of the adjacent Nuristan (historically known as Kafiristan) province of Afghanistan once practiced the same polytheistic religion as the Kalash. By the late 19th century much of Nuristan had been converted to Islam, although some evidence has shown the people continued to practice their customs. Over the years, the Nuristan region has also been the site of numerous war activity that has led to the death of many endemic Nuristanis and has seen an inflow of surrounding Afghans to claim the vacant region, who have since admixed with the remaining natives. The Kalash of Chitral maintained their own separate cultural traditions."….Newby, Eric. A Short Walk in the Hindu Kush. 2008. 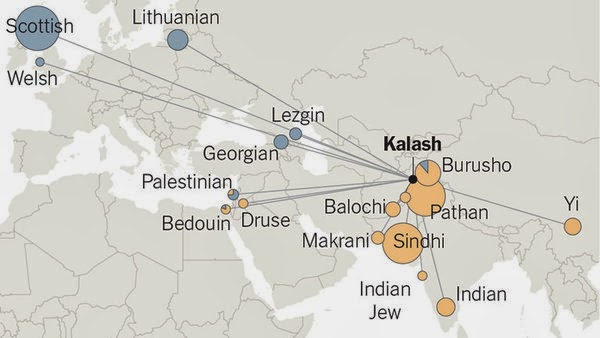 The Kalash people of Pakistan were found to have chunks of DNA from an ancient European population. Statistical analysis suggests a mixing event before 210 B.C., possibly from the army of Alexander the Great.….Circles show the apparent sources of DNA within the two parent populations, one European and one Asian…..http://www.nytimes.com/2014/02/14/

Connection with Kambojas………" The Kambojas are also described as a royal clan of the Sakas.…..Parts of Kafiristan (Nuristan) formed a portion of the Greek strapy of the Paropamisadae in the fourth and third century BCE. The people of the region were then called Kambojas and described as of mixed Indo-Iranian descent. Possibly, they occupied much wider area then and were gradually forced to their present mountainous fastnesses by the Muslim onslaught during medieval era. One of their dominant clans is still known as Kam or Kamoz, while the other is called Kamtoz, which remind us of the name Kamboja" …….The Kamoz tribe of Kafirs are fairly supposed to be the surviving representatives of the Kambojas of primeval Indian literature, a name with which scholars have connected that of Cambyses....In two other Kafir tribes — the Asphins and Ashkins (Ashkuns) — one is tempted to trace remnants of the Aspasii and Assaceni of Alexander's historians"…..Geographical Dictionary of Ancient and Medieval India and several other authorities note that the Siah-Posh tribe living in Hindukush mountains descended from the ancient Kambojas ."

"The Kambojas (Sanskrit: कम्बोज, Kamboja; Persian: کمبوہ‎, Kambūh) were a Kshatriya tribe of Iron Age India, frequently mentioned in Sanskrit and Pali literature. Modern scholars conclude that the Kambojas were an Avestan speaking Eastern Iranian tribe who later settled in at the boundary of the ancient India. The Kambojas are classified as a Mleccha or barbarous tribe by the Vedic Inhabitants of India. Indologists believe that Kambojas have adopted Hinduism in a late Vedic Period."….In the Mahabharata and in Pali literature, Kambojas appear in the characteristic Iranian roles of horsemen and breeders of notable horses.

"The Siah-posh Kafirs of the Hindukush ranges, who till recently were collectively known as Kamoges or Kamojis (Sanskrit Kambojis or Kambojas) are stated to have been a remain of a considerable ancient people among whom were original Kashmerians and a greater part of Badakshan and Kabol as far as Deggan tribes...and on the southern face of the higher ridges of Himalaya extending to an unknown distance...Though whole of their pristine population being subjected to Muslim conquerors in the Middle Ages, and having mixed with them, they have now lost their pristine individuality of national character but still among the Kabulis, in particular, it is still not infrequent to observe heads and figures that might serve for models to the sculptors who would portray a Jupiter or a Mars according to the refined idealism of the ancient Greeks. The Kafirs have oval faces, their brows are well-arched and the nose and mouth even more refined than the Greeks. They are still fairer, generally, with lighter hair and gray eyes. Blending with the nearest black-haired tribes, the ancestors of the Kamoges are believed to have given rise to ancient Persians and with the faired-haired on the north, they are said to have produced the handsome tribes of the Goths. The name Kamoges or Kamojis apparently reminds one of the ancient Kambojas living in Hindukush, Pamirs as well as in Badakshan. The Siah-Posh clans of Kams, Kamoz/Kamoges and Kamtoz, as stated above, are said to have descended from the ancient Kambojas 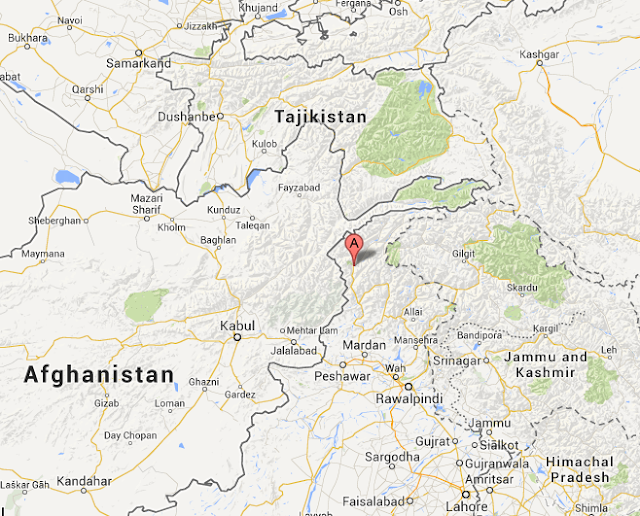 "The physical characteristics of the Kafir Kamoges wonderfully remind us of the physical charactersitcs of the ancient Kambojs who have especially been described as exceedingly handsome race (Mahabharata 7.23.43). Ancient Kamboj princes have also been noted as tall like towers, exceedingly handsome and of gaura varna (See: Mahabharata 8.56.113-114; Mahabharata ; MBH 7.92.72-76), having faces illustrious like the full moon (Mahabharata 8/56/111), lotus eyed (Mahabharata 8/56/110-114), handsome like the lord-moon among the stars (Mahabharata 1/67/31). Even Ramayana calls the Kambojas as ravisanibha i.e with faces illustrious like the Sun ( Ramayana 1/55/2). Besides, there are also ancient references, Buddhist as well as Brahmanical, which speak very high of the beauty of the Kamboj women."

"...the Kafir (Infidel) of the Sanskrit Kambojia are said to be Koresh from a people of that name (Kuresh Perian, and Keruch Rajput) known to have anciently inhabited these eastern districts of the Paropamisus of the Greeks" …… "The name Koresh or Kurush is said to be national designation of Kafir tribes north of Lughman; and it is not impossible that it may have been family name of Cyrus, king of Persia who was born in Cabul country"…..H. W. Bellew

The Káfirs of the Hindu-Kush by Sir George Scott Robertson

War at the top of the world: the struggle for Afghanistan, Kashmir, and Tibet By Eric S. Margolis