"In Kalapa there is a Sun temple and a Moon temple…… "

"In Hindu mythology, the Lunar Dynasty (Somavansha, Chandravansha) also known as Ailas is one of the four principal houses of the Kshatriya varna, or warrior–ruling caste. This legendary dynasty was descended from the moon (Soma or Chandra), while the other principal houses, the Solar Dynasty (Suryavanshi) claims descent from the sun (surya), the Agnivanshi claim to have been born to the fire-god Agni, and the Nagavanshi claim to be descended from the Nagas, the sacred serpents, with the term vansh referring to descent…. The legendary capital of the Lunar Dynasty was Pratisthana, said to be founded by Ila.

Kṣatriya — the kṣatriyas or warriors, a first-class man of the royal order…great warriors… belonging to the kṣatriya community…Gautama Buddha was born into a Kshatriya family

"In Shambhala, in the center of the ring of mountains lies the country’s capital, Kalapa by name. By night, the city of light is lit up as bright as day, so that the moon can no longer be seen. There the Shambhala king lives in a palace made from every conceivable gem and diamond. The architecture is based upon the laws of the heavens. There is a Sun temple and a Moon temple, a replica of the zodiac and the astral orbits. A little to the south of the palace the visitor finds a wonderful park. In it Suchandra ordered the temple of Kalachakra and Vishvamata to be built. It is made from five valuable materials: gold, silver, turquoise, coral, and pearl. Its ground plan corresponds to the Kalachakra sand mandala."

"The Lunar Dynasty starts with the son of Chandrama, the Moon-god. Chandrama had eloped with Tara, the wife of Brihaspati from whom he got a son Budh. Budh came across Ila, the daughter of Vaivasvat Manu, wandering in the forest and enchanted by her beauty, married her. They begot a mighty son, Pururava or Yela (from Ila) who was a very virtuous king and became one of the six World-Monarchs. He established the city of Prayaag which later became the capital of his kingdom."…http://www.hindu-mythology.faithweb.com/index_5.html

"The Rig Veda, Book One……HYMNS TO SURYA (THE SUN) AND SOMA (THE MOON)…… one of the oldest extant texts in any Indo-European language. Philological and linguistic evidence indicate that the Rigveda was composed in the north-western region of the Indian subcontinent, roughly between 1700–1100 BC (the early Vedic period). There are strong linguistic and cultural similarities with the early Iranian Avesta, deriving from the Proto-Indo-Iranian times, often associated with the early Andronovo and Sintashta-Petrovka cultures of c. 2200 – 1600 BC."….Thomas Oberlies, Die Religion des Rgveda, Wien 1998.

"Haoma is the Avestan language name of a plant and its divinity,….Soma (Sanskrit सोम sóma), or Haoma (Avestan), from Proto-Indo-Iranian *sauma-…. It is to be noted here that the Persians used the phonetic "Ha" instead of "Sa" in their language. For example they called river Sarasvati, Haravati; River Sindhu is called Hindu ( some believe this is the root of the Hindu nomenclature), and here we see them call Soma - Haoma…..In the Hōm yašt of the Avesta, the Yazata (divine) Haoma appears to Zoroaster "at the time of pressing" (havani ratu) in the form of a beautiful man. Yasna 9.1 and 9.2 exhort him to gather and press Haoma plants. Haoma's epitheta include "the Golden-Green One" (zairi-, Sanskrit hari-), "righteous" (ašavan-), "furthering righteousness" (aša-vazah-), and "of good wisdom" (hu.xratu-, Sanskrit sukratu-)…."

"Haoma as a divinity…The Yazata Haoma, also known by the middle Persian name Hōm Yazad, is the epitome of the quintessence of the haoma plant, venerated in the Hōm Yašt, the hymns of Yasna 9-11…..In those hymns, Haoma is said to appear before Zoroaster in the form of a "beautiful man" (this is the only anthropomorphic reference), who prompts him to gather and press haoma for the purification of the waters (see Aban). Haoma is 'righteous' and 'furthers righteousness', is 'wise' and 'gives insight' (Yasna 9.22). Haoma was the first priest, installed by Ahura Mazda with the sacred girdle aiwiyanghana (Yasna 9.26) and serves the Amesha Spentas in this capacity (Yasht 10.89). "Golden-green eyed" Haoma was the first to offer up haoma, with a "star-adorned, spirit-fashioned mortar," and is the guardian of "mountain plants upon the highest mountain peak." (Yasht 10.90)….Haoma is associated with the Amesha Spenta Vohu Manah (Avestan, middle Persian Vahman or Bahman), the guardian of all animal creation. Haoma is the only divinity with a Yasht who is not also represented by a day-name dedication in the Zoroastrian calendar. Without such a dedication, Haoma has ceased to be of any great importance within the Zoroastrian hierarchy of angels."... 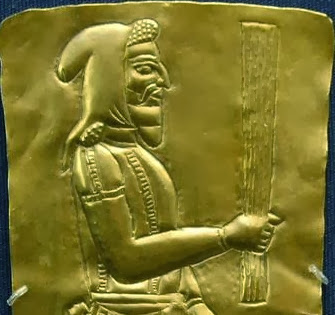 "Avestan /əˈvɛstən/,formerly also known as "Zend" or "Old Bactrian", is an East Iranian language known only from its use as the language of Zoroastrian scripture, i.e. the Avesta…. The Yasnas' oldest portions may be older than the Gathas, later adapted to more closely follow the doctrine of Zoroaster. The various Yashts are in Younger Avestan and thought to date to the Achaemenid era (559–330 BC)"

"Bharata …..Chakravarti or Emperor…. Kshtriya…an emperor of India, and is referred to in Hindu and Jain theology. He was son of King Dushyanta of Hastinapura and Queen Śakuntalā and thus a descendant of the Lunar Dynasty of the Kshatriya Varna. Bharata had conquered all of Greater India, uniting it into a single political entity which was named after him as "Bhāratavarṣa"…..According to the Mahabharata as well as the numerous puranas and diverse Indian history, Bharat Empire included the whole territory of the Indian subcontinent, including parts of present day Pakistan, Afghanistan, Tajikistan, Uzbekistan, Kyrgyzstan, Kazakhstan, Turkmenistan, North-west Tibet, Nepal and Bangladesh…..This represented as the ideal sample of great empires, which was dominated by harmony, wealth and prosperity…..There are many references to "Bharata Chakravarti" in the sacred Jain texts. He conquered all of the earth and the worlds above and reached the top of "Meru" or "Sumeru" mountain (the center of the world and tallest mountain) and placed a flag. But upon reaching the top he saw numerous such flags of world conquerors before him. This made him feel very insignificant and he took the diksha and attained nirvana. His successor was his youngest son bhumanyu…..Bhārat (along with India) is the official English name of Republic of India and Bhārata Gaṇarājyam is the official Sanskrit name of the country, while Bhārat Ganarājya is the official Hindi name."

"There are two different ksatriya families of the royal order, one descending from the king of the moon planet and the other descending from the king of the sun. Whenever the Supreme Personality of Godhead appears, He generally appears in a ksatriya family because He comes to establish religious principles and the life of righteousness. According to the Vedic system, the ksatriya family is the protector of the human race. When the Supreme Personality of Godhead appeared as Lord Ramacandra, He appeared in the surya-vamsa, the family descending from the sun-god, and when He appeared as Lord Krsna, He did so in the Yadu dynasty, or yadu-vamsa, whose descent was from the moon-god. In the Ninth Canto, Twenty-fourth Chapter, of Srimad-Bhagavatam, there is a long list of the kings of the yadu-vamsa. All the kings in both the soma-vamsa and surya-vamsa were great and powerful, and Maharaja Pariksit praised them very highly (rajnam cobhaya-vamsyanam caritam paramadbhutam). "….http://vedabase.net/sb/10/1/1//en2

"Surya (Devanagari: सूर्य Sūrya, "the Supreme Light"[2]) Suraya or Phra Athit is the chief solar deity in Hinduism. The term Surya also refers to the Sun, in general…..Surya is the chief of the Navagraha, Indian "Classical planets" and important elements of Hindu astrology. He is often depicted riding a chariot harnessed by seven horses or one horse with seven heads, which represent the seven colours of the rainbow or the seven chakras. He also presides over Sunday. Surya is regarded as the Supreme Deity by Saura sect…. Smartas worship him as one of the five primary forms of God….Surya as the Sun is worshipped at dawn by most Hindus and has many temples dedicated to him across India. He also enjoys worship as a part of the Navagraha. He is especially worshipped in the Hindu festivals of Ratha Saptami, Makar Sankranti, Chhath and Samba Dashami."

"Manjushrikirti was born in Shambhala, the son of King Deva-Indra and his queen, Kauśikí. His rule is said to have extended over "hundreds of petty kings and a hundred thousand cities." He is said to have expelled 300,510 followers of heretical doctrine of the Mlechhas or "materialistic barbarians", some of whom worshipped the sun, but after reconsidering, he brought them back and they asked for his teachings. Next he united all the castes, or religious factions, of Shambala into one Vajra or 'Diamond' Caste. Consequentially, he was the first king of Shambhala to be given the title Kalki (Tib. Rigden), meaning "Holder of the Castes" or "Wisdom Holder."

"In Hinduism, Anumati ("divine favor" in Sanskrit, Devanagari: अनुमति), also known as Chandrama, is a lunar deity and goddess of spirituality …..In mythology, a lunar deity is a god or goddess associated with or symbolizing the moon. These deities can have a variety of functions and traditions depending upon the culture, but they are often related to or an enemy of the solar deity. Even though they may be related, they are distinct from the solar deity. Lunar deities can be either male or female, and are usually held to be of the opposite sex of the corresponding solar deity….The monthly cycle of the moon, in contrast to the annual cycle of the sun's path, has been implicitly linked to women's menstrual cycles by many cultures, as evident in the links between the words for menstruation and for moon in many resultant languages. Many of the most well-known mythologies feature female lunar deities, such as the Greek goddesses Phoebe, Artemis, Selene, and Hecate as well as the Chinese goddess Chang'e…Male lunar gods are also frequent, such as Sin of the Mesopotamians, Mani of the Germanic tribes, the Japanese god Tsukuyomi. These cultures usually featured female Sun goddesses. There are also many lunar deities that were prevalent in Greek and Egyptian civilizations."….