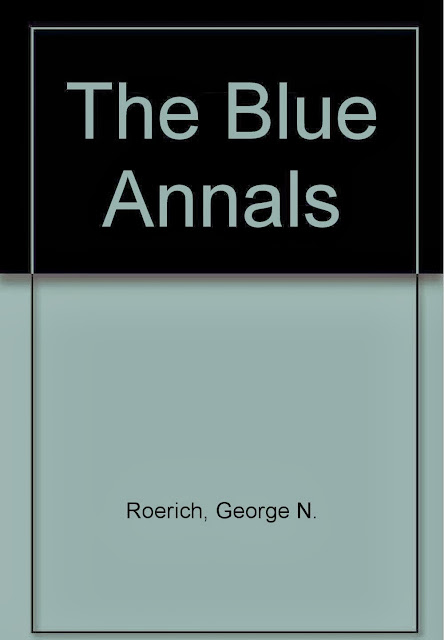 "In the 7th century, the Persian Empire's province of Sistan extended from the modern day Iranian province of Sistan to central Afghanistan and the Balochistan province of Pakistan. Sistan was captured during the reign of Umar, and like other provinces of the Persian Empire, it also broke into revolt during Uthmans reign in 649…..Zunbil, also written as Zhunbil, was a dynasty south of the Hindu Kush in southern Afghanistan. They ruled from the early 7th century until the Islamic conquest of Afghanistan in 870 AD…..In 653-4 AD, an army of around 6,000 Arabs were led by General Abdur Rahman bin Samara and they arrived to the shrine of Zoon in Zamindawar. It is reported that General Abdur Rahman "broke of a hand of the idol and plucked out the rubies which were its eyes in order to persuade the Marzbān of Sīstān of the god's worthlessness." The General explained to the Marzbān: "my intention was to show you that this idol can do neither any harm nor good." At this point the people of southern Afghanistan accepted Islam for the first time.,,,,the Aruna mountain, located in Kapisa, to Tsu-ko-cha (Zabul)… In the year 650 Abdullah bin Amer came to Kerman. He sent Zabi bin Ziyad Haresi to Seistan who came to the Helmand valley and made peace with Pervez, the governor of Zaranj. Zabi ruled for two and half years and after him Abdul Rahman bin Samara became governor of Zaranj…." 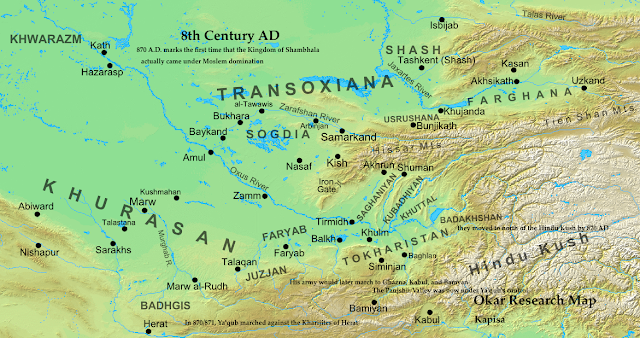 The traditional chronology of the Kalacakra is as follows:
1. Sakyamuni appeared at Dhanyakataka in South India and preached the Kalacakra-tantra at the request of King Sucandra from Sambhala near the Sita River in Turkestan.
2. The next six kings of Sambhala continued the tradition.
3. The eighth King Manjusrikirti composed the shorter version in five chapters in 1,047 stanzas from the long tantra in 12,000 stanzas. The extant version of the Kalacakra-tantra is the shorter one.
4. The Subsequent kings were called Kulika or `bearers of the lineage'. Kulika Pundarika wrote the Vimalaprabha commentary reproduced in this volume.
5. A Muslim invasion in 624 AD weakened the kingdom. It was 800 years after Kulika Pundarika.
6. In 966 AD Chilupa of Orissa travelled to Sambhala and became versed in the root tantra and its Vimalaprabha commentary. Chilupa is the Kalacakrapada Senior, while his disciple Naropa is known as Kalacakrapada Junior.
http://www.kkagencies.com/index.php?p=sr&Uc=3863095834357942218

"The Blue Annals (Tibetan: དེབ་ཐེར་སྔོན་པོ, Wylie: deb ther sngon po'') completed in 1476, written by Gö Lotsāwa Zhönnu Pel (gos lo tsā ba gzhon nu dpal, 1392–1481), is a Tibetan historical survey with a marked 'ecumenical' (Tibetan: Rimé) view, focusing on the dissemination of various sectarian spiritual traditions throughout Tibet…..An English translation by George de Roerich with help from Gendun Chöphel was published in 1949 and has since remained one of the most widely consulted sources on the history of Tibetan Buddhism up to the fifteenth century…..The Tibetan & Himalayan Digital Library is working on a new online translation of the Blue Annals……it has recently been digitized by THDL at the University of Virginia and can be found on the THDL website."….http://www.thlib.org

Secret Mantra in Jambudvīpa {R 753}….."The chapter begins with a short description of the origins and Secret mantra in India. Certain tantras are said to come from the four directions. First, in the East, king Pradoyotacandra received the Yoga-tantras, including the Sarvatathāgatatattvasaṃgraha. In the south, Nāgārjuna is said to have also received Yoga-tantras, specifically the Guhyasamāja-tantra. In the West (Oḍḍīyāna) is where the Yoginī-tantras appear. Lastly, in the north, (Śambhala) is the place from where the Kālacakra teachings spread."….https://collab.itc.virginia.edu

"Accounts of the Kālacakra lineages in India {R 756 - 763}…..The next several sections discuss several different Kālacakra lineages as they came to Tibet from India. There are disagreements among the various lineage accounts and ‘gos presents several of them before discussing the inconsistencies…..In the first lineage account, an Indian named Kālacakrapāda is said to have received the tantra directly from the king of Śambhala, pad ma dkar po, also known as Puṇḍarika- a manifestation of Avalokiteśvara and the author of the companion commentary to the Kālacakra tantra, the Vimalaprabhā. This section describes the events leading to Kālacakrapāda’s receiving of the Kālacakra-tantra in Śambhala. The legends differ. In some he actually goes to Śambhala and other he does not. ‘gos lo tsāba suggests we accept the version where Kālacakrapāda receives the tantra from pad ma dkar po in a vision as he prepares to travel to Śambhala…It should be noted that the discussion of the lineage is complicated by the fact that multiple individuals are known by the name "Kālacakrapāda."."….https://collab.itc.virginia.edu

Chapter 1….Blue Annals Chapter 1: Early Indian history, Indian and Tibetan Imperial Lines, and the Early Spread of the Buddhist Teachings in Tibet…This section essentially provides historical background on Buddhism in India, and the imperial period of Tibetan culture (7th to 9th centuries). ….Its story: This Great-Translator on three occasions journeyed to Kāśmīra, ….http://www.himalayanart.org

"…. from the West Śrī Kam?bala (dpal la ba pa) and others discovered the Yoginī-Tantras (rnal 'byor ma'i rgyud) in the country of Oḍḍīyāna. They also spread towards Madhyadeśa. After that, there appeared from the realm of Śambhala commentaries (on the Kālacakra-Tantra) composed by Bodhisattvas, such as the Śrī Kālacakra (buddhist diety?) and others. They spread towards Madhyadeśa…..Blue Annals: Part 10 (Kalachakra)

"…DATE OF THE KĀLACAKRATANTRA….In the Vimalaprabhā it is said: Here the fixing of chronological calculations (byed pa la nges pa): In 600 years from the time of the Tathāgata-the period of Ma?juśrī (?jam dpal); in 800 years from that time- the era of the Mlecchas; by lower?ing the era of the Mlecchas by 182 years, (one obtains) the {R 754} time of rigs ldan rgyal dka', during which Kulika Durjaya introduced the "lesser" chronology (mentioned in the Kālacakra). This date should be regarded as a correct calculation based on the era of the Mlecchas. …."The past Prabhāva year, etc. " mean the cycles of sixty years of which the first was the Prabhāva (rab byung) year (me yos, Fire-Hare year, 1027 A.D.) and which (are designated) as ?Prabhāva and others." …Blue Annals: Part 10 (Kalachakra)

"… most of the later scholars maintained that the time of the appearance of the Kālacakra in Madhyadeśa corresponded to the beginning of the first cycle (rab byung) of the "past" years ('das lo). But it seems to me that the Kālacakra had appeared in Āryadeśa (a region inhabited by Aryans or followers of the Aryan laws) long before that time….Thus it has to be admitted that the system of Kālacakra seems to have reached Āryadeśa at an early date, and that (the system) became known to many people in the time of Kālacakrapāda, father and son…..The accounts about the teacher in whose time the Kālacakra had been obtained from Kulika (rigs ldan) in Āryadeśa…..Blue Annals: Part 10 (Kalachakra)

"(THE FIRST) KĀLACAKRA LINEAGE….Now the Lineage: king pad ma dkar po, a manifestation of the Bodhisattva Avalokiteśvara, who was indicated in the last śloka of the prophecy (given by Buddha about the kings of Śambhala), taught (the system) to the ācārya Kālacakrapāda. ….This ācārya belonged to the kṣatriya caste of Madhyadeśa….One once told him: In the Northern Śambhala there exist many Tantras and commentaries taught and prophesied by the Buddha. Go in search of them and listen to them! He then thought of going there. In the opinion of some scholars he had joined a caravan of merchants, and proceeded there. Some said that he was guided there by a phantom monk. Again some said that the Venerable Tārā herself helped him. Again some said that when he decided to proceed to Śambhala, and was preparing (for the journey), he visited Śambhala in his vision, and obtained the doctrines from Ārya Avalokiteśvara himself (rigs ldan pad ma dkar po)……Blue Annals: Part 10 (Kalachakra)

"According to the dus kyi 'khor lo'i bsdus don, com?posed by the bla ma bsod nams od zer ba: Thus in the Realm of Śambhala exists the Kālacakra-Tantra together with its commentary and precepts, but in the Āryadeśa of India, (the Kālacakra) was first obtained in Śambhala from a mani?festation of a Bodhisattva by an Indian named the monk bsod snyoms pa, the Great (Piṇḍo-pa). It is not known what Bodhisattva manifested himself in him….Blue Annals: Part 10 (Kalachakra)

"ANOTHER LINEAGE….Again, according (to another) Lineage: the ācārya Kālacakrapāda, the Senior, was the son of a yoginī who took him with her to Śambhala. (There) a monk of an extremely beautiful appearance, blessed him, and he developed the ability of committing to memory a thousand ślokas every day. After that the boy heard the Mūla-Tantra, the Sa?caya-Tantra and the commentary recited by the monk who was a manifestation of Avalokiteśvara. He committed these texts to memory and then proceeded to Madhyadeśa. This boy on being ordained, became known as tsi lu pa; he was also known by the name of tshim ?bu ba. When the ācārya tsi lu pa was residing (at the court) of the king of ka ta ka, he had three disciples, who made the request that the Tantra and the commentary might be written down in the form of a book. So he wrote it down, and the books were entrusted to the three disciples…..Blue Annals: Part 10 (Kalachakra) 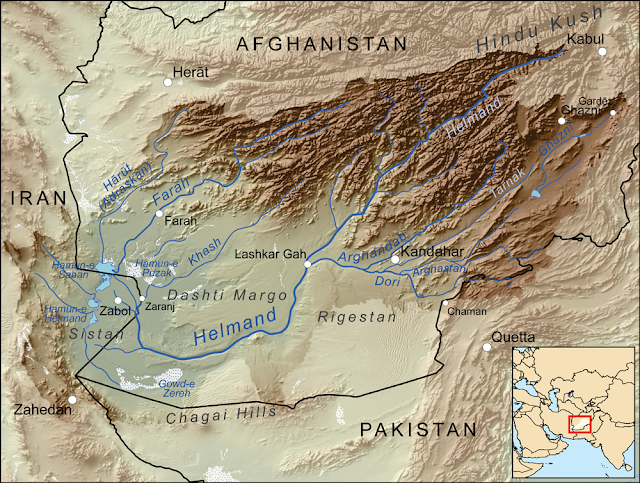 "Shambhala (S): Phonetic rendering of Sambhala. From the Skt. sam, or happiness. Tibetan: de-byung (source of happiness). An ancient, perhaps mythical, kingdom. The historical period ranges from 4000 BCE with the emergence of equestrian warriors from the north, to 624 CE with the Arabic/Moslem incursions. The premise is that there was a very advanced spiritual kingdom in Northern Central Asia 6,000 years ago that had a tremendous influence on the origins of many "Eastern" and "Western" spiritual traditions. This would include the Semitic traditions of Judaism, Christianity, and Islam as well as the "outgrowths of the Aryan culture" -- Hinduism, Buddhism, and Jainism."….http://lionsroar.name/tantric_glossary.htm