"Here is the familiar group that we call in Shambhala the “four dignities.” They also appear in Chinese Taoist lore, often associated with windhorse, another Chinese idea. In fact, South Chinese Taoism is probably the origin of the four dignities. We have Chinese texts from the second century A.D. that speak of them with only slight variations. In the epic they are called the “four wind gods,” which is probably short for the “four windhorse gods.” It is interesting to note how in the passage above they are matched with four of the five Chinese elements."…..The Thirteen Dralas of Tibet…..by Robin Kornman

Tiger, Dragon, Garuda, Snow Lion:
"There is a passage in the Gesar epic in which the dralas who adorn Gesar’s body are listed. Here is a section of it:
In order to benefit sentient beings, his body Does damage to perverted devils in nine ways:
So that the fire element cannot harm him
He has the fire god Red Tiger
And his emanation, the werma Tigress.
For the water element, there is the wind god of the water element, Turquoise Dragon,
And his emanation, the werma Golden Fish.
For the wood element, there is the wind god of the wood element, Garuda, king of birds,
And his emanation, the werma White-Breasted Eagle.
For the iron element, the iron wind god Great Lion
And his emanation, the werma White Snow Lion.
May these protect him when crossing plains of fire or unfordable rivers, Protect him from the king of winds, the tornado,
And from the weapons demons wield.
May these eight wind gods and wermas
Gather to protect the body of the great one.
And may the auspiciousness of bliss pervade Jambudvëpa.
Their four emanations are called “werma emanations.” In general there is little obvious difference between wermas and dralas: their iconography is indistinguishable and, as you can see here, their functions are the same as those of the war gods. Originally the wermas were gods of the tips of arrows, which probably means that they rode on these weapons when they were fired to make sure that the arrows struck home."….http://nalandatranslation.org/media/Thirteen-Dralas-of-Tibet-by-Robin-Kornman.pdf

"At the heart of Chinese mythology are four spiritual creatures (Sì Shòu 四獸) -- four celestial emblems -- each guarding a direction on the compass. In China, the four date back to at least the 2nd century BC. Each creature has a corresponding season, color, element, virtue, and other traits. Further, each corresponds to a quadrant in the sky, with each quadrant containing seven seishuku, or star constellations (also called the 28 lunar mansions or lodges; for charts, see this outside site). Each of the four groups of seven is associated with one of the four celestial creatures. There was a fifth direction -- the center, representing China itself -- which carried its own seishuku. In Japan, the symbolism of the four creatures appears to have merged with and been supplanted by the Shitennō (Four Heavenly Kings). The latter four are the Buddhist guardians of the four directions who serve Lord Taishakuten (who represents the center), and are closely associated with China’s Theory of Five Elements. In any case, the four animals are much more prevalent in artwork in China than in Japan, although in Japan one can still find groupings of the four creatures. The four were probably introduced to Japan from China sometime in the 7th century AD, for their images are found on the tomb walls at Takamatsuzuka 高松塚 in Nara, which was built sometime in the Asuka period (600 - 710 AD). They are also found on the base of the Yakushi Triad 薬師三尊像 at Yakushi-ji Temple 薬師寺, also in Nara."…http://www.onmarkproductions.com/html/ssu-ling.shtml 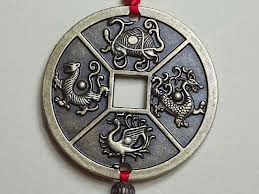 " History of Taoism….Laozi is traditionally regarded as the founder of Taoism and is closely associated in this context with "original", or "primordial", Taoism…..Whether he actually existed is disputed;however, the work attributed to him – the Tao Te Ching – is dated to the late 4th century BC…..Taoism draws its cosmological foundations from the School of Naturalists (in form of its main elements – yin and yang and the Five Phases), which developed during the Warring States period (4th to 3rd centuries BC)."….Robinet, Isabelle. Taoist Meditation: The Mao-shan Tradition of Great Purity (Albany: SUNY Press, 1993

"The principal philosophy and religious traditions of Taoism, which incorporate elements of Buddhism, were established in China about 2,400 years ago…..The latest official statistics indicate that there are more than 30,000 mainland sites dedicated to the religion. ….."

"Buddhism first reached China from India roughly 2,000 years ago, during the Han Dynasty. Han Dynasty China was deeply Confucian, and Confucianism is focused on maintaining harmony and social order in the here-and-now world. Buddhism, on the other hand, emphasized entering the monastic life to seek a reality beyond reality. Confucian China was not terribly friendly to Buddhism…..However, Buddhism found an ally in China's other indigenous religion, Taoism. Taoist and Buddhist meditation practices and philosophies were similar in many respects, and some Chinese took an interest in Buddhism from a Taoist perspective. Early translations of Buddhist texts from Sanskrit into Chinese borrowed Taoist terminology. Still, during the Han Dynasty very few Chinese practiced Buddhism….The Han Dynasty fell in 220, beginning a period of social and political chaos in China. The northern part of China was overrun by non-Chinese tribes, and the southern part was ruled by a succession of weak dynasties. This chaos also weakened the hold of Confucianism among the ruling class.…..In south China, a kind of "gentry Buddhism" became popular among educated Chinese that stressed learning and philosophy. The elite of Chinese society freely associated with the growing number of Buddhist monks and scholars. The dialog between Buddhism and Taoism continued, and the Taoist influence caused the Chinese to favor Mahayana over Theravada Buddhism."…Buddhism in China: The First Thousand Years…..A Condensed History of Buddhism in China, 1-1000 CE…..by Barbara O'Brien

"The term Yao refers to a non-sinitic speaking, southern “Chinese” people who originated in central China, south of the Yangzi River…..Despite categorization by Chinese and Western scholars of Yao as an ethnic minority with a primitive culture, it is now recognized that not only are certain strains of religious Daoism prominent in Yao ritual traditions, but the Yao culture also shares many elements with pre-modern official and mainstream Chinese culture…..This book is the first to furnish a history—part cultural, part political, and part religious—of contacts between the Chinese state and autochthonous peoples (identified since the 11th century as Yao people) in what is now South China. It vividly details the influence of Daoism on the rich history and culture of the Yao people…..The book also includes an examination of the specific terminology, narratives, and symbols (Daoist/ imperial) that represent and mediate these contacts."……A History of Daoism and the Yao People of South China…..by Eli Alberts……The foreword to this unprecedented study is by distinguished Asian Studies scholar, Professor Barend J. ter Haar of Leiden University.

"Bodhidharma was a Buddhist monk who lived during the 5th/6th century CE. He is traditionally credited as the transmitter of Ch'an (Sanskrit: Dhyāna, Japanese: Zen) to China, and regarded as its first Chinese patriarch....... the Japanese tradition regards Bodhidharma to be from Persia......(Masato Tojo, Zen Buddhism and Persian Culture).....Bodhidharma was primarily active in the lands of the Northern Wèi Dynasty (386–534). ....He is referred as "The Blue-Eyed Barbarian" (碧眼胡) in Chinese Chan texts......The earliest text mentioned Bodhidharma is The Record of the Buddhist Monasteries of Luoyang (洛陽伽藍記 Luòyáng Qiélánjì) which is compiled in 547 by Yáng Xuànzhī (Yang-Hsuan-chih 楊衒之), a writer and translator of Mahāyāna Buddhist texts into the Chinese language. Yang gave the following account: 'At that time there was a monk of the Western Region named Bodhidharma, a Persian Central Asian. "

"Taoism and Buddhism have much in common. In terms of philosophy and practice, both are nondual traditions. The worship of Deities is understood, fundamentally, to be an unveiling and honoring of aspects of our own wisdom-mind, rather than the worship of something outside of us. The two traditions also have historical connections, particularly in China. When Buddhism arrived - via Bodhidharma - in China, its encounter with the already-existing Taoist traditions gave birth to Ch’an Buddhism. The influence of Buddhism on Taoist practice can be seen most clearly in the Quanzhen (Complete Reality) lineage of Taoism…..Perhaps because of these similarities, there’s a tendency at times to conflate the two traditions, in places where they really are distinct. One example of this is in relation to the concept of emptiness. Part of this confusion, from what I can understand, has to do with translation. There are two Chinese words – Wu and Kung – which are commonly translated into English as “emptiness.” The former – Wu – holds a meaning in alignment with what is most commonly understood to be emptiness, in the context of Taoist practice…..The latter – Kung – is more an equivalent to the Sanskrit Shunyata or Tibetan Stong-pa-nyid. When these are translated into English as “emptiness,” it is the emptiness as articulated within Buddhist philosophy and practice."…..Emptiness in Taoism & Buddhism:comparing Shunyata & Wu…..By Elizabeth Resigner

"…Xi Wangmu (Hsi Wang-mu; Chinese: 西王母; pinyin: Xī Wángmǔ; Wade–Giles: Hsi1 Wang2-mu3; literally "Queen Mother of the West") is a Chinese goddess known from the ancient times. The first historical information on her can be traced back to oracle bone inscriptions of the fifteenth century BCE that record sacrifices to a "Western Mother". (Cahill, 1993) Even though these inscriptions illustrate that she predates organized Taoism, she is most often associated with Taoism. From her name alone some of her most important characteristics are revealed: she is royal, female, and is associated with the west.(Benard, 2000) …The Queen Mother of the West usually is depicted holding court within her palace on the mythological Mount Kunlun, usually supposed to be in western China (a modern Mount Kunlun is named after this). Her palace is believed to be a perfect and complete paradise, where it was used as a meeting place for the deities and a cosmic pillar where communications between deities and humans were possible. (Dien, 2003)."….Kunlun Mountain is a cosmic mountain typologically similar and sometimes identified with Mount Meru…Pamir Mountains, junction of the Tian Shan, Karakoram, Kunlun, and Hindu Kush ranges….