Alexander the Great, Nysa & The Dionysiaca

"Alexander the Great….One of the puzzles of the Indian campaign is the visit to Nysa. Here, the god Dionysus was venerated, one of Alexander's mythological ancestors …. It is not known which god was identified with Dionysus. Next to the town was a sacred mountain called Meros ('thigh') by the Greeks; it reminded them of the story that Dionysus was born from Zeus' thigh. In fact, the Indian name was Meru, the holy mountain or 'axis' of the world…….The route to Nysa as described by the Greek historians of Alexander's campaign suggest a southerly location near the river Kunar, but a location more to the north, near modern Chitral, better fits the fact that there was ivy to be found on the spot. Moreover, there is an impressive mountain near Chitral, called Tirich Mir. And although a march to Chitral makes no strategic sense, it is perhaps to be preferred; Alexander's marches to Troy and Siwa made no strategic sense either, but had a lot to do with Alexander's presumed ancestry."…..http://www.livius.org/aj-al/alexander/alexander13.html

In 326 AD, Alexander discovered in Gandara a town called Nysa that was dedicated to the god Dionysus.. 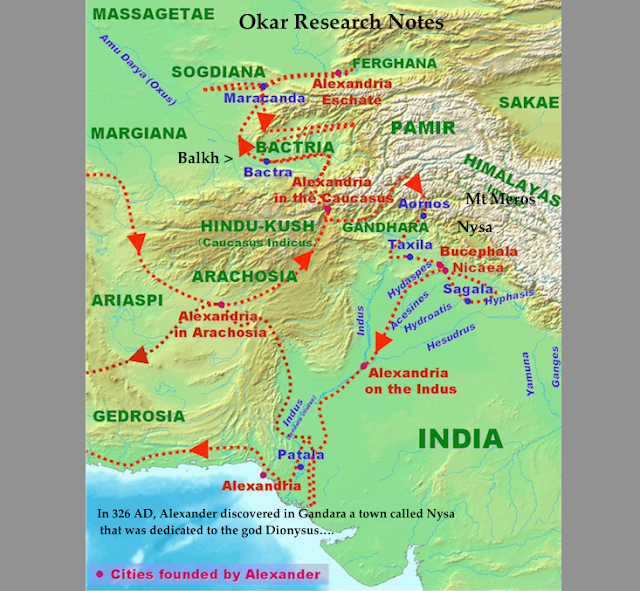 "The Dionysiaca is an ancient epic poem and the principal work of Nonnus. It is an epic in 48 books, the longest surviving poem from antiquity at 20,426 lines, composed in Homeric dialect and dactylic hexameters, the main subject of which is the life of Dionysus, his expedition to India, and his triumphant return to the west….Nonnus' compendious accounts of Dionysiac legend and his use of variant traditions and lost sources have encouraged scholars to use him as a channel to recover lost Hellenistic poetry and mythic traditions…..Book 13: Zeus orders Dionysus to conquer India….

"Nysa ……In Greek mythology, the mountainous district of Nysa (Greek: Νῦσα), was the traditional place where the rain nymphs, the Hyades, raised the infant god Dionysus, the "Zeus of Nysa"……Homer mentions the mountain Nyseion as the place where Dionysus, under the protection of the nymphs, grew up….. On his return from Nysa to join his fellow Olympians, Dionysus brought the entheogen wine……According to Sir William Jones, "Meros is said by the Greeks to have been a mountain in India, on which their Dionysos was born, and that Meru, though it generally means the north pole in Indian geography, is also a mountain near the city of Naishada or Nysa, called by the Greek geographers Dionysopolis, and universally celebrated in the Sanskrit poems".

"Herodotus connects the black inhabitants of Africa to the dark Indians, which must have made it easy to move Nysa to the valley of the river Swat, in the mysterious Indus country that was discovered by Alexander the Great. Here, he visited a city called Nysa near a mountain called Meros, 'thigh', which reminded the Macedonians of the myth that Dionysus was born from Zeus' thigh. The presence of ivy was sufficient evidence to prove the connection. Behind this story undoubtedly is the ancient Indian legend about the world mountain Meru. The story by Arrian of Nicomedia…..

"The myth of Nysa……In 326, Alexander discovered in Gandara a town called Nysa that was dedicated to the god Dionysus. (Probably, this was the Indian god Shiva. The mountain Meru mentioned below was the center of the Indian universe.) The only description of the temple is to be found in the Life of Apollonius of Tyana by the Greek author Philostratus. The story of the discovery is told by the Greek author Arrian of Nicomedia, whose Anabasis (section 5.1.1-2.2) was translated by Aubrey de Sélincourt…..In the country on Alexander's route between the river Cophen and the Indus lay the city of Nysa, supposed to have been founded by Dionysus, at the time of his conquest of the Indians......ttp://www.livius.org/aj-al/alexander/alexander_t18.html

"Jehlam River or Jhelum River Urdu: دریاۓ جہلم‎, /ˈdʒeɪləm/ (Sanskrit: वितस्ता, Kashmiri: Vyeth, Hindi: झेलम, Punjabi: ਜੇਹਲਮ (Gurmukhi), (Nastaliq)) is a river that flows in India and Pakistan. It is the largest and most western of the five rivers of Punjab, and passes through Jhelum District. It is a tributary of the Chenab River and has a total length of about 450 miles (725 kilometers)…The river Jhelum is called Vitastā in the Rigveda and Hydaspes by the ancient Greeks……Verinag in Kashmir is approximately 80 km from Srinagar, by road, at an elevation of 1,876 m. It is believed that the eponymous Verinag spring is the chief source of the river Jhelum." 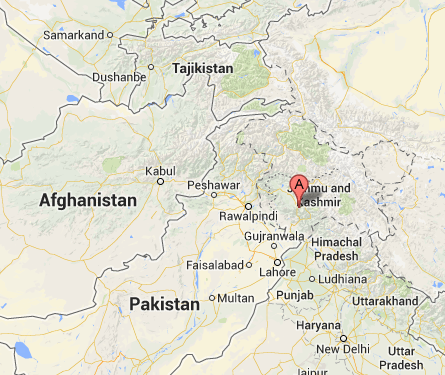 "The name survives in the Kashmiri name for this river as Vyeth. According to the major religious work Srimad Bhagavatam, the Vitastā is one of the many transcendental rivers flowing through land of Bharata, or ancient India…..The River Jhelum was regarded as a god by the ancient Greeks, as were most mountains and streams; the poet Nonnus in the Dionysiaca (section 26, line 350) makes the Hydaspes a titan-descended god, the son of the sea-god Thaumas and the cloud-goddess Elektra. He was the brother of Iris, the goddess of the rainbow, and half-brother to the Harpies, the snatching winds. Since the river is in a country foreign to the ancient Greeks, it is not clear whether they named the river after the god, or whether the god Hydaspes was named after the river. Alexander the Great and his army crossed the Jhelum in BC 326 at the Battle of the Hydaspes River where it is believed that he defeated the Indian king, Porus. According to Arrian (Anabasis, 29), he built a city "on the spot whence he started to cross the river Hydaspes", which he named Bukephala (or Bucephala) to honour his famous horse Bukephalus or Bucephalus which was buried in Jalalpur Sharif. It is thought that ancient Bukephala was near the site of modern Jhelum City. According to a historian of Gujrat district, Mansoor Behzad Butt, Bukephalus was buried in Jalalpur Sharif, but the people of Mandi Bahauddin, a district close to Jehlum, believed that their tehsil Phalia was named after Bucephalus, Alexander's dead horse. They say that the name Phalia was the distortion of the word Bucephala.

"…. ancient Greek visitors to North India also made the same identification: as early as 300 BC, Megasthenes, ambassador of Seleucus I to Chandragupta Maurya, refers to the god in the mountains (Shiva) as Dionysus."….Strabo Geography 15.58, citing Megasthenes' Indica, cited in O'Flaherty, p. 81.

"…After defeating Persia in the year 334 BCE, Alexander of Macedon was irresistibly drawn towards the great Indian landmass. However, the Persians warned him the country was no easy target; that several famous conquerors had fallen at the gates of India. The Persians told him how their greatest king, Cyrus, who had conquered much of the civilised world, had been killed in a battle with Indian soldiers exactly two centuries before Alexander……And in an earlier antiquity, the Assyrian queen Semiramis, who had crossed the Indus with 400,000 highly trained troops, escaped with just 20 troops, the rest being slaughtered by the Indians…..In his book, Foreign Influence on Ancient India, Krishna Chandra Sagar says 150 years before Alexander, Indian archers and cavalry formed a significant component of the Persian army and played a key role in subduing Thebes in central Greece……Alexander, however, knew no fear. More than anything else, he wanted to invade India. It would prove to be a strategic blunder."….http://indrus.in/blogs/2013/06/03/alexander_vs_porus_beyond_the_fog_of_war_25749.html

"Battle of Hydaspes …. Greek contemporary writers describe the Battle of Hydaspes (Jhelum) as the hardest fought of all Alexander’s battles….The only reference in Arrian's history to a victory celebration by Alexander's army was after the battle with Porus.”

"…It is asserted by some that the name Moriya or Maurya (as in the Mauryan Empire of Magadha) comes from the Mor (Modern name Koh-i-Mor i.e. Mor hill---alleged to be the ancient Meru of the classical writings) located in the Paropamisade region between river Kunar and Swat in the land of Ashvakas (This name, however, refers to the Meru mountain of Chitral, Tirich Mir; there also is a Deva-Meru, modern Diamar). It is claimed that since Chandragupta Maurya could have belonged to Mor he was called Moriya or Maurya after his motherland."….http://en.wikipedia.org/wiki/Ancestry_of_Chandragupta_Maurya

"…Although most sources indicate that Chandragupta was of east-Indian origin, alternative theories have been proposed by scholars. Some relate Sandrocottos (or Androcottos) to Sisicottos of classical literature. Sisicottos was the ruler of Paropamise (Hindu Kush) who helped the last Persian satrap (Bessus of Bactria) against Alexander, later co-operating with the latter during the Sogdian campaigns. During Alexander's campaigns in Kabul and the Swat River valley, Prince Sisicottos helped him defeat several principalities of the Ashvakas……Meri may have been another political centre of the Mor (Meros) people. The name "Moriya" (or Maurya) may have come from Mor (Koh-i-Mor; "Mor hill), the ancient Meros of classical literature in the Paropamisade region between the Kunar and Swat Rivers in the land of Ashvakas. (This name, refers to the Meru mountain of Chitral, Tirich Mir; there is also a Deva-Meru in modern Diamar). It is claimed that since Chandragupta Maurya could have belonged to Mor, he "was called Moriya or Maurya after his motherland"…..Spooner observes, "After Alexander's death, when Chandragupta marched on Magadha, it was with largely the Persian army (Shaka-Yavana-Kamboja-Parasika-Bahlika) that he won the throne of India."….….http://en.wikipedia.org/wiki/Ancestry_of_Chandragupta_Maurya