"Jainism, traditionally known as Jaina dharma, is an Indian religion that prescribes a path of non-violence towards all living beings and emphasizes spiritual independence and equality between all forms of life. Practitioners believe that non-violence and self-control are the means by which they can obtain liberation......The word Jainism is derived from a Sanskrit verb Jin which means to conquer. It refers to a battle with the passions and bodily pleasures that the jaina ascetics undertake. Those who win this battle are termed as Jina (conqueror). The term Jaina is therefore used to refer to laymen and ascetics of this tradition alike.....Jainism is one of the oldest religions in the world. Jains traditionally trace their history through a succession of twenty-four propagators of their faith known as tirthankara with Ādinātha as the first tirthankara and Mahāvīra as the last of the current era. For long periods of time Jainism was the state religion of Indian kingdoms and widely adopted in the Indian subcontinent. The religion has been in decline since the 8th century CE due to the growth of, and oppression by the followers of Hinduism, and Islam." 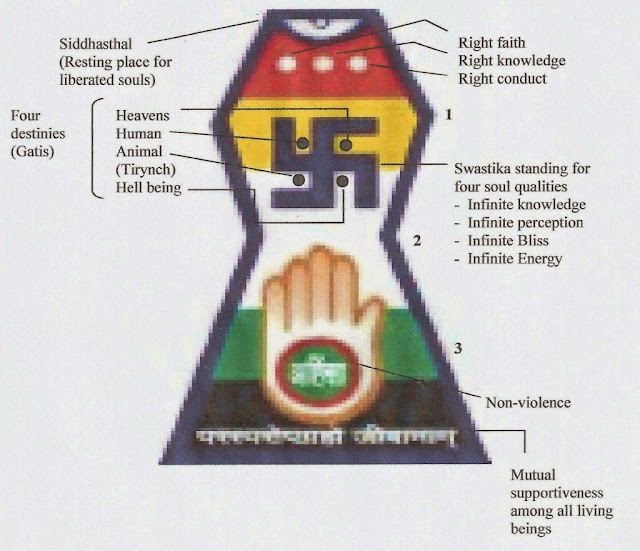 "The Jain emblem represents the universe as described in Jain scriptures. It consists of three Lokas (realms). The upper portion indicates Urdhava Lok (heaven), the middle portion indicates Madhya Lok (material world) and the lower portion indicates Adho Lok (hell).....The three dots on the top under the semi-circle symbolize Triratna (Ratnatraya) – Samyak darshan (right belief), Samyak Gyan (right knowledge), and Samyak Charitra (right conduct).... four arms of the Swastika symbolize the four Gati (destiny): Narak (demon), Triyanch (animal), Manushya (human) and Dev (angel). It represents the perpetual nature of the universe in the Madhya Lok (material world), where a creature is destined to one of those states based on their Karma (deeds). It also represents the four columns of the Jain Sangh: Sadhus, Sadhvis, Shravaks and Shravikas - monks, nuns, female and male laymen. It also represents the four characteristics of the soul: infinite knowledge (Anant Jnan), infinite perception (Anant Darshan), infinite happiness (Anant Sukh), and infinite energy (Anant Virya).....The symbol of hand in the lower portion shows fearlessness and symbolizes the feeling of Ahimsa(non-violence) towards all the creatures in this world. The circle in the middle of the hand symbolizes Samasara (reincarnation cycle) and the 24 spokes represent the preachings from the 24 Tirthankars, which can be used to liberate a soul from the cycle of reincarnation.....the concepts show the path to enlightenment by following the basic principles of Ahimsa (non-violence), Triratna (right belief, right knowledge, and right conduct) and Parasparopagraho Jivanam (helping others)."

"Jain concept of time (Kalacakra: The wheel of time).....http://www.indiadivine.org/content/topic/1413522-fwd-jain-concept-of-time-kalacakra-the-wheel-of-time/

"The Kalachakra system is clearly related to the ancient Vedic tradition in India which existed long before Buddhism appeared......The Kalachakra refers to many different traditions, for example the Hindu; Saivite, Samkya, Vaishnava, the Vedas, Upanisads and Puranas traditions, but also Jainism. For example, the Kalachakra mandala includes deities which are equally accepted by Hindus, Jainas and Buddhists.....The Kalachakra tantra puts the life of Shakyamuni Buddha in the 9th. Century BCE, instead of the more commonly accepted 6th. Century BCE.....King Suchandra came from Shambhala (some say north of Kashmir) to request and receive the Kalachakra teachings from Shakyamuni Buddha. After the teachings, he wrote them down and composed the 'Mula' or 'Root Text' of the Kalachakra tantra, comprising 12,000 verses. However, this text has never reached us.....

"Mount Kailāsa (कैलास) .......Mt. Kailash is a sacred mountain of much spiritual significance to followers of four of the great religions of Asia: the Buddhists, Hindus, Jains, and the Bönpo. .....Jains refer to Mount Kailash as Mt. Asthapada and believe that their religious founder, Rishavdev, attained Nirvana – The Ultimate Happiness there.......Tibetan Buddhists call it Kangri Rinpoche; 'Precious Snow Mountain'. Bon texts have many names: Water's Flower, Mountain of Sea Water, Nine Stacked Swastika Mountain. For Hindus, it is the home of the mountain god Shiva and a symbol of his power symbol om; for Jains it is where their first leader was enlightened; for Buddhists, the navel of the universe; and for adherents of Bon, the abode of the sky goddess Sipaimen.......In Jainism, Kailash is also known as Meru Parvat or Sumeru. Ashtapada, the mountain next to Mt. Kailash, is the site where the first Jain Tirthankara, Rishabhadeva, attained Nirvana/moksa (liberation)."

"The Paryushana festival...Paryushana (or Paryusan) is one of the two most important festivals for the Jains, the other being Diwali......During the 8-day festival, the Kalpa Sutra is recited in the Swetmbara Deravasi sect, that includes a recitation of the section on birth of Lord Mahavira on the fifth day. Few Shwetambar Sthanakvasi sect recites Antahgadh Sutra, which details the life of great men and women who attained moksha during the Neminath and Mahavir era. In the Digambara sect the Tatvartha-sutra of Umaswati is recited. On the dashami, the sugandha-dashami vrata occurs. The Digambaras celebrate Ananta-chaturdashi on the chaturdashi, special worship is done on this day. Many towns have a procession leading to the main temple.

"Mahavira (540 BCE–468 BCE), also known as Vardhamana, was the twenty-fourth and last tirthankara of Jainism. In Jainism, a Tīrthaṅkara is a human being who helps in achieving liberation and enlightenment as an arihant.....He was born into a royal family in what is now Bihar, India. At the time of his birth, the whole town marked prosperity in term of agriculture, health, wealth and wisdom. It is for this reason that he was named as Vardhman (Hindi : Vridhi) by his parents. At the age of 30 he left his home in pursuit of spiritual awakening (Diksha). For the next 12 and a half years he practiced intense meditation and severe penance, after which he achieved Kevala Jnana or enlightenment. He travelled all over India for the next 30 years to teach his philosophy which is based on ahimsa, satya, asteya, brahmacharya and aparigraha.....Mahavira attained nirvana after his physical death at the age of 72. He was one of the most popular propagators of Jainism, and he is regarded as a reformer of Jainism rather than its founder."

The Kalpa sutra contains a biography of the founder of Jainism, Mahavira, as well as other founders of the religion, and a list of the successive Jain leaders......http://www.sacred-texts.com/jai/sbe22/index.htm

"The Kalki Purana (Sanskrit: कल्कि पुराण Kalki purāṇa) is a prophetic work in Sanskrit that details the life and times of Kalki, the tenth and final of the Dashavatara (the ten Avatars) of the Hindu deity Lord Vishnu. .....The Kalki Purana tells the Hindu prophecy of Kalki. The additional elements not found in The Vishnu Purana suggest a composition date in the eleventh or twelfth century, after the appearance in India of the Kalachakra texts and before the assimilation of Buddhism into Hinduism in northern India with the destruction of the main Buddhist monasteries......In this version, the leader of the mlecchas will be Kali (“The Disputer”), the personification of the kaliyuga (the age of disputes). Kali will befoul the pure Hindu Dharma by teaching doctrines contradictory to it, such as the uniting of the castes, intercaste marriage, and the lifting of the status of the lower castes. Kalki will defeat Kali and the Buddhists and Jains who follow his teachings. According to the Hindu etymology, his name Kalki means “The Destroyer of What is Foul.” His victory will reestablish pure Dharma with its unadulterated caste system, end the kaliyuga, and herald a new golden age.....Hindus felt offended by the Kalachakra teaching of a Kalki mixing and uniting the castes.."....http://en.wikipedia.org/wiki/Kalki_Purana

"Anekantavada.....One of the most important and fundamental doctrines of Jainism is anēkāntavāda. It refers to the principles of pluralism and multiplicity of viewpoints, and to the notion that truth and reality are perceived differently from diverse points of view, no single one of which is complete."

"According to the jaina texts, the universe is divided into three parts, the upper, middle, and lower worlds, called respectively urdhva loka, madhya loka, and adho loka. It is made up of six constituents: Jīva, the living entity; Pudgala, matter; Dharma tattva, the substance responsible for motion; Adharma tattva, the substance responsible for rest; Akāśa, space; and Kāla, time......Time is beginningless and eternal; the cosmic wheel of time, called kālachakra, rotates ceaselessly. It is divided into halves, called utsarpiṇī and avasarpiṇī. Utsarpiṇī is a period of progressive prosperity, where happiness increases, while avsarpiṇī is a period of increasing sorrow and immorality."

"The Ṇamōkāra mantra, also variously referred to as the Navakār Mantra, Namaskār Mantra or the Pancha Parameshti Namaskār, is the most significant mantra in Jainism. This is the 1st prayer recited by the Jains while doing Samayik. While reciting this mantra, the devotee bows with respect to the humans who have cleared their gati karmas (arihants), the fully liberated souls (siddhas), the spiritual leaders (acharyas), the teachers (upajjhayas) and the monks......A 162 BCE inscription, the Hathigumpha inscription mentions the Namokar Mantra and Jain monarch Khārabēḷa."

"Khārabēḷa (Khāravēla, 193 BCE – after 170 BCE) was the third and greatest emperor of the Mahameghavahana dynasty of Kaḷinga (present-day Odisha)....During the reign of Khārabēḷa, the Chedi dynasty of Kaḷinga ascended to eminence and restored the lost power and glory of Kaḷinga, which had been subdued since the devastating war with Ashoka."