"Mantra (Sanskrit मन्त्र) means a sacred utterance, numinous sound, or a syllable, word, phonemes, or group of words believed to have psychological and spiritual power. Mantra may or may not be syntactic or have literal meaning; the spiritual value of mantra comes when it is audible, visible, or present in thought.....Earliest mantras were composed in Vedic times and are at least 3000 years old.....Mantras are found in various schools of Hinduism, Buddhism, Jainism and Sikhism.....Similar chants, compositions and concepts are found in Zoroastrianism, Taoism, Judaism, Christianity and elsewhere......Mantras serve a central role in the tantric schools of Hinduism. & Buddhism.........These mantras are considered equivalent to deities, a sacred formula and deeply personal ritual, and considered to be effective only after initiation. However, in some schools of Hinduism, Buddhism, Jainism or Sikhism, this is not so......Mantras come in many forms, including ṛc (verses from Rigveda for example) and sāman (musical chants from the Sāmaveda for example). They are typically melodic, mathematically structured meters, resonant with numinous qualities. At its simplest, the word ॐ (Aum, Om) serves as a mantra. In more sophisticated forms, they are melodic phrases with spiritual interpretations......" 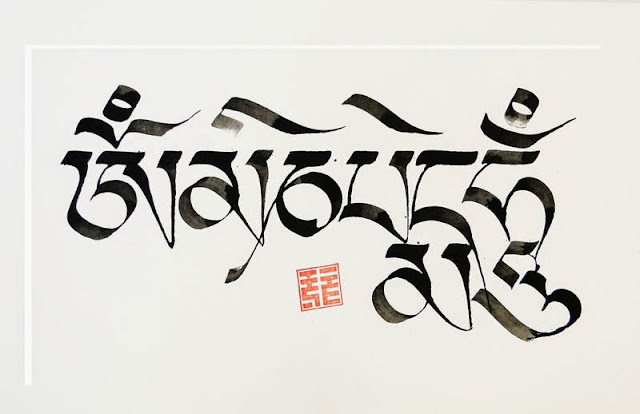 "Hinduism.......Scholars consider mantras to be older than 1000 BC. By the middle Vedic period - 1000 BC to 500 BC - claims Frits Staal, mantras in Hinduism had developed into a blend of art and science to include verses, saman, yajus, and nigada....Vedic poets became fascinated by the inspirational power of poems, metered verses and music. They referred to them with the root dhi-, which evolved into dhyana (meditation) of Hinduism, and the language used to start and assist this process manifested as mantra....Hindu mantras may be spoken aloud, anirukta (not enunciated), upamsu (inaudible), or recited manasa (not spoken, but recited in mind). In ritual use, mantras are often silent, they are instruments of meditation....Mantra japa is a practice of repetitive muttering the same mantra for an auspicious number of times, the most popular being 108."....Frits Staal (1996), Rituals and Mantras, Rules without meaning,

According to Schlerath, the concept of sātyas mantras is found in Indo-Iranian Yasna 31.6 and Rigveda, where it means more than 'true Word', it is considered formulated thought which is in conformity with the reality or poetic (religious) formula with inherent fulfillment.....Schlerath, Bernfried (1987). ""Aša: Avestan Aša"". Encyclopaedia Iranica. 2:694-696. New York: Routledge & Kegan Paul

Mathra....."In the Zoroastrian scriptures is a section called the Gathas or hymns. These hymns are believed to be the original words of Zarathushtra, faithfully preserved as an oral tradition through the generations. Zarathushtra, and later tradition, refer to the Gathas as mathra (later called a manthra)."

Jainism....."There are many mantras in Jainism and the most supreme amongst all is the Navkar Mantra. The others being Bhaktamar Strotra, Uvasaggharam Stotra, etc. However, mantras, couplets, are either chanted or sung, either aloud or in silence......Ṇamōkāra mantra is the fundamental prayer of Jainism. In this prayer there is no mention of names, including that of the tirthankara. Jains do not ask for favours or material benefits from the tirthankara or from monks. This mantra simply serves as a gesture of deep respect towards beings they believe are more spiritually advanced and to remind followers of Jainism of their ultimate goal, nirvana.".....Shah, Umakant P. (1987), Jaina-Rupa-Mandana, Abhinav Publications,

Buddhism....."There is a Vinaya rule which forbids monks engaging in the Brahminical practice of chanting mantras for material gain....sections on mantras began to be included in some Mahayana sutras such as the White Lotus Sutra, and the Lankavatara Sutra. ....

Indo-Tibetan Buddhism......"Mantrayana (Sanskrit), that may be rendered as "way of mantra", was the original self-identifying name of those that have come to be determined 'Nyingmapa'.....The Nyingmapa which may be rendered as "those of the ancient way", a name constructed due to the genesis of the Sarma "fresh", "new" traditions. Mantrayana has developed into a synonym of Vajrayana....in about the 7th century, Tantra started to gain momentum....... The aim of Vajrayana practice is to give the practitioner a direct experience of reality, of things as they really are. Mantras function as symbols of that reality, and different mantras are different aspects of that reality – for example wisdom or compassion. Mantras are often associated with a particular deity, one famous exception being the Prajnaparamita mantra associated with the Heart Sutra...... about a direct experience of reality is to engage the entire psycho-physical organism in the practices.....a typical sadhana or meditation practice might include mudras, or symbolic hand gestures; the recitations of mantras; as well as the visualisation of celestial beings and visualising the letters of the mantra which is being recited."

Bon......"The Three Essential Mantras of Bon...... These mantras are powerful practices to awaken our mind to its innate potential of purity, non-dual awareness, and healing. Each of these three mantras is practiced traditionally as a complete practice toward liberation. These three practices are also part of the Bon Ngondro or preliminary practices that open our mind and heart toward the higher practices of Tantra or Dzogchen.......http://www.olmoling.org/events/the_three_essential_mantras_of_bon/
Om Ma Tri Mu Ye Sa Le Du...... A mantra of Bon...... Mantra of complete body (or, rdzogs-sku).....http://gyalshen.org/ngondro-preliminary/

Shingon Buddhism...... "Kūkai (774-835), a noted Buddhist monk, advanced a general theory of language based on his analysis of two forms of Buddhist ritual language: dharani (dhāra.nī) and mantra. Mantra is restricted to esoteric Buddhist practice whereas dharani is found in both esoteric and exoteric ritual. Dharanis for instance are found in the Heart Sutra. The term "shingon" (lit. true word) is the Japanese pronunciation of the Chinese term for mantra, chen yen....The Japanese on'yomi reading of the Chinese being shingon (which is also used as the proper name for the prominent esoteric Shingon sect).

"The Dzungars invaded Tibet in 1717 and deposed and killed a pretender to the position of Dalai Lama who had been promoted by Lhabzang, the titular King of Tibet. This met with widespread approval. However, they soon began to loot the holy places of Lhasa which brought a swift response from Emperor Kangxi in 1718, but his military expedition was annihilated by the Dzungars not far from Lhasa.......Many Nyingmapas and Bonpos were executed and Tibetans visiting Dzungar officials were forced to stick their tongues out so the Dzungars could tell if the person recited constant mantras, which was said to make the tongue black or brown. This allowed them to pick the Nyingmapas and Bonpos, who recited many magic-mantras.....A habit of sticking one's tongue out as a mark of respect on greeting someone has remained a Tibetan custom into modern times.."

Sikhism.....In the Sikh religion, a mantar or mantra is a Shabad (Word or hymn) from the Adi Granth to concentrate the mind on God and the message of the ten Sikh Gurus.....Mantras in Sikhism are fundamentally different from the secret mantras used in other religions.[86] Unlike in other religions, Sikh mantras are open for anyone to use. They are used openly and are not taught in secret sessions but are used in front of assemblies of Sikhs......The Mool Mantar, the first composition of Guru Nanak, is the most widely known Sikh mantra."

Taoism.......There are mantras in Taoism such as the words in Dafan yinyu wuliang yin (大梵隱語無量音) and the Tibetan Buddhism mantra om (唵)

"Greek Magical Papyri (Latin Papyri Graecae Magicae, abbreviated PGM) is the name given by scholars to a body of papyri from Graeco-Roman Egypt, which each contain a number of magical spells, formulae, hymns and rituals. The materials in the papyri date from the 2nd century BC to the 5th century AD. The manuscripts came to light through the antiquities trade, from the 18th century onwards. One of the best known of these texts is the so-called Mithras Liturgy.....Each volume contains a number of spells and rituals."

"Native American.....Native American song texts include both public pieces and secret songs, said to be "ancient and unchanging", which are used only for sacred and ceremonial purposes. There are also public sacred songs, as well as ritual speeches that are sometimes perceived as musical because of their use of rhythm and melody. These ritual speeches often directly describe the events of a ceremony, and the reasons and ramifications of the night.....Vocables, or lexically meaningless syllables, are a common part of many kinds of Native American songs. They frequently mark the beginning and end of phrases, sections or songs themselves. Often songs make frequent use of vocables and other untranslatable elements. Songs that are translatable include historical songs, like the Navajo "Shi' naasha', which celebrates the end of Navajo internment in Fort Sumner, New Mexico in 1868......Morning Song - Cherokee."

The Vedas: "The Sacred writings of the Hindus, the Vedas were written over many centuries by various authors. The Vedas consists of three major parts, the Samhitas, or collection of verses (mantras), the Brahmanas, collections of rituals and sacrificial ceremonies which were performed by the inherited class of priests (Brahmins), and the Upanishads, collections of discourses concerning the ground of all reality and the inner essence of the human being......The Rig Veda: The oldest and most important of the four Samhitas, the Rig Veda consists of hymns in praise of various deities worshipped by the ancient Indo-Iranians. The oldest of these are believed by scholars to reflect the religious ideas of the Proto Indo-Iranians....The core text of the Atharvaveda falls within the classical Mantra period of Vedic Sanskrit at the end of the 2nd millennium BCE - younger than the Rigveda, and roughly contemporary with the Yajurveda mantras, the Rigvedic Khilani, and the Sāmaveda. The Atharvaveda is also the first Indic text to mention iron (as krsna ayas, literally "black metal"), so the scholarly consensus dates the bulk of the Atharvaveda hymns to the early Indian Iron Age, c. 1200 or 1000 BC,corresponding to the early Kuru Kingdom."

"Incantation......The Latin incantare, which means 'to utter an incantation', or cast a magic spell, forms the basis of the word "enchant", with deep linguistic roots going back to the Proto-Indo-European kan- prefix. So it can be said that an enchanter or enchantress casts magic spells, or utters incantations, similar to what are called Mantra in Sanskrit.......An incantation or enchantment is a charm or spell created using words. An incantation may take place during a ritual, either a hymn or prayer, and may invoke or praise a deity. In magic, occultism, and witchcraft it is used with the intention of casting a spell on an object or a person and may employ the use of pharmakeia. The term derives from Latin "incantare" (tr.), meaning "to chant (a magical spell) upon," from in- "into, upon" and cantare "to sing".......In medieval literature, folklore, fairy tales and modern fantasy fiction, enchantments (from the Old French "enchantement") are charms or spells. The term was loaned into English since around AD 1300. The corresponding native English term being "galdor" "song, spell". It has led to the terms "enchanter" and "enchantress", for those who use enchantments." 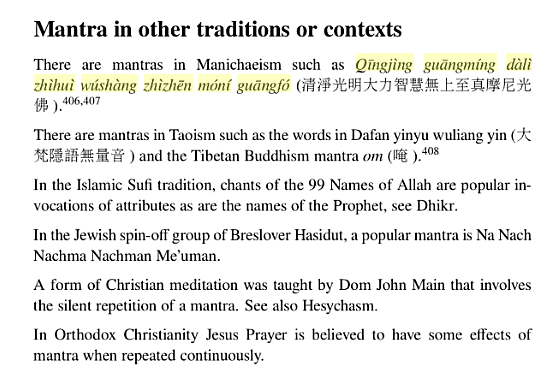