"Khyungsprul Rinpoche (Khyung sprul rin po che) (1897-1955), who spent more than fifty years of his life traveling in Tibet, India, Bhutan and Nepal, was one of the most renowned Bon po pilgrims of his time. Born into a family of A mdo Ga rgya aristocratic lineage, in the nomadic Bon po kingdom of Hor, he showed a great will to devote his entire life to religious activities from a very early age.......The whole of his spiritual life was inspired by the ris med movement, making no distinction between Bon and Buddhism, as he constantly asserted in his poems.1 Thus, he received his full drang srong vows in the Bon po scholastic tradition of sMan ri monastery (gTsang), but later he had no objections in joining the Buddhist community of rdzogs chen practitioners established in Nam mkha’ khyung rdzong (mNga' ris) under the guidance of bDe chen rgyal po. He spent a large part of his time in India as a Buddhist pilgrim visiting most of the sacred sites of northern India,- but at the same time he was the instigator of the return of Bon po traditions to the ancient land of Zhang zhung in mNga' ris. Very significantly, he showed a particular interest for the remote Kinnaur valley." ....Josep Lluís Alay .......University of Barcelona

"In 1996 the abbot of Gur gyam Monastery, dGe slong bsTan 'dzin dbang grags, wrote a book on the History of mNga' ris in which he highlighted the relevance of Khyung sprul rin po che in the reintroduction of Bon in mNga' ris."

"Per Kvaerne published Khyung-sprul 'Jigs-med nam- mkha'i rdo-rje (1897-1995): An Early Twentieth-century Tibetan Pilgrim in India in English as a chapter in Pilgrimage in Tibet. This was considered the starting point for Khyung sprul rin po che's biographical studies and gave rise later in 2001 to an unpublished master’s dissertation by Sonam Chogyal about the Bon po lama's foundation of his own monastery in mNga' ris. More recently, a few studies have been published examining a number of more specific aspects of Khyung sprul rin po che's life and works."...

".... his biography also provides a unique, and therefore highly valuable, source of information regarding the traditional toponymy and onomastics of remote and isolated regions including Hor, Kinnaur and mNga’ ris (Ngari Prefecture)....." 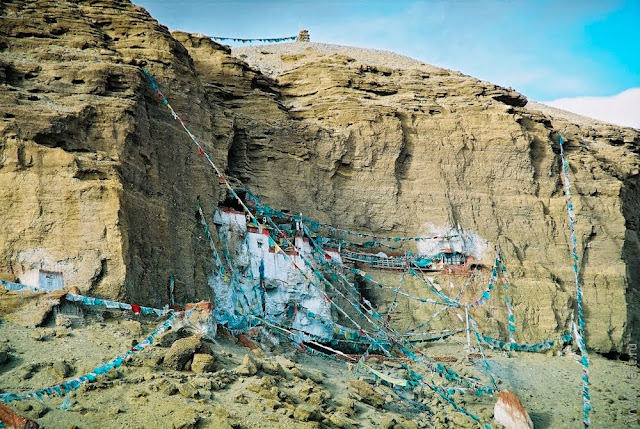 "Drenpa Namkha (Tibetan: dran pa nam mkha' ) was born in the 8th century near Mount Kailash in Chunlung Ngul Kha in south-western Tibet. As a young student he was a blessed with eight principal Bon teachers. Drenpa Namkha became a self-realized supreme master of the three Bon practices, known as Sutra, Tantra and Dzogchen. Drenpa Namkha is the primary long-life deity according to Bon.....One of the foremost Bonpos of the time, Drenpa Namkha (Dran-pa Nam-mkha'), played an important role during the second persecution of Bon. He headed the Bonpo side in a contest against the Buddhists organized by the king to discover which side had the greatest miraculous power....Drenpa Namkha is a popular personage in the Bon tradition. Drenpa Namkha's biography in eight volumes was published by sPa-tshang Sonam Gyantsan, Delhi in 1983. Drenpa Namkha is said to have had twin sons: Tshe-dbang Rig-'dzin, a Bon teacher, and Pad-ma 'Byung-gnas, the famous Buddhist teacher Padmsambhava.....Later masters said to be reincarnations of Drenpa Namkha include Bonpo Traksel (bon po brag tshal, d.u.), Rigdzin Trinle Lhundrub (rig 'dzin phrin las lhun grub, d.u.), and Drenpa Zungi Namtrul (dren pa zung gi rnam 'phrul, d.u.).".....Karmay, The Treasury of Good Sayings, Oxford University Press, London 1972

"The Rimé movement was a movement involving the Sakya, Kagyu, Nyingma & Bon Schools of Tibetan Buddhism..... Jamyang Khyentse Wangpo (1820–1892)....and Jamgön Kongtrül Lodrö Thayé (1813-1899) .....compiled together the teachings of the Sakya, Kagyu and Nyingma, including many near-extinct teachings.......Rimé movement was not exactly eclectic but universalistic (and encyclopaedic), rimed (pa) (the antonym of risu ch'edpa) meaning unbounded, all-embracing, unlimited, and also impartial.".....The movement's name is derived from two Tibetan words: Ris (bias, side) and Med (lack), which combined expresses the idea of openness to other Tibetan Buddhist traditions, as opposed to sectarianism. The Rimé movement therefore is often misunderstood as trying to unite the various sects through their similarities. Rather Rimé was intended to recognize the differences between traditions and appreciate them, while also establishing a dialogue which would create common ground. It is considered important that variety be preserved, and therefore Rimé teachers are generally careful to emphasize differences in thought, giving students many options as to how to proceed in their spiritual training."......http://en.wikipedia.org/wiki/Rimé_movement

Moulin, Christophe .... History of Bön - second part: The Propagation of Bön in Zhang-zhung and Tibet

Kvæne, Per (1995). The Bon Religion Of Tibet: The Iconography Of A Living Tradition.