It is interesting to note that Manasarovar does not receive any water directly from Mt Kailas. It is Rakshas Tal that does....With the flow of holy waters from Maanas, Rakshas Tal was sanctified.

"Sutleg Valley (alternative spelling Satluj) is a valley in the Kinnaur district of Himachal Pradesh, India. Sutlej river runs through it....The Sutlej River (alternatively spelled as Satluj River) (Punjabi: ਸਤਲੁਜ, Hindi: सतलुज, Urdu: درياۓ ستلُج‎ ) is the longest of the five rivers that flow through the historic crossroads region of Punjab in northern India and Pakistan." 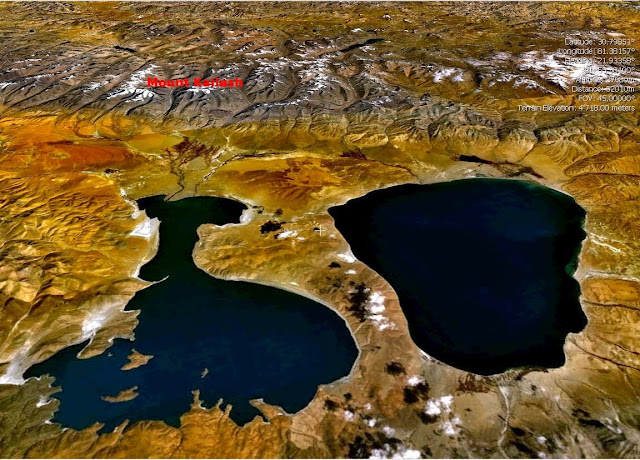 "......the Tibetan belief that Rakshas Tal is no longer inauspicious. While it was originally an abode of demons, with the flowing of Ganga from Maanas, the Rakshas Tal is now cleansed. There is a local myth about it. There were two golden fishes in Manasarovar that fought with each other. And then one left Maanas creating the Ganga-Chu channel to Rakshas Tal, and the other followed it in pursuit. Water from Maanas flowed to Rakshas Tal… With the flow of holy waters from Maanas, Rakshas Tal was sanctified. And now, about Rakshas Tal, Lama Govinda says, “Though it is held in fear, it is as sacred as its sister-lake, because even those powers which appear to us terrifying and destructive, or hidden in the darkness of the depth, are as divine as those which we worship as embodiments of light and goodness.......It is interesting to note that Manasarovar does not receive any water directly from Kailas. It is Rakshas Tal that does....Let us now take leave of the lakes and follow the Sun, as we proceed to that Northernmost of places… Mt Meru, also known as Kailasa,".....http://gkamesh.wordpress.com/tag/sven-hedin/

"Lake Manasarovar (Manas Sarovar; Lake Manas; Mapam Yumco; Ma-fan Hu; Mapham Yu Tso; Tibetan: མ་ཕམ་གཡུ་མཚོ།, Wylie: ma-pham g.yu-mtsho, ZYPY: Mapam Yumco; Sanskrit: मानस सरोवर; simplified Chinese: 玛旁雍错; traditional Chinese: 瑪旁雍錯) is a freshwater lake in the Tibet Autonomous Region, 940 kilometres (580 mi) from Lhasa. To the west of it is Lake Rakshastal; to the north is Mount Kailash....Lake Manasarovar is near the source of the Sutlej River which is the easternmost large tributary of the Indus. .....Lake Manas Sarovar overflows in to lake Rakshastal which is a salt water endorheic lake. These lakes used to be part of Sutlej River basin and got separated due to tectonic activity. Lake Manas Sarovar can be connected to the Ganga River basin through a fifteen km long tunnel to divert its water for easy availability to Hindus of India who considers its water as sacred."

"The word "Manasarovara" originates from Sanskrit language, which is a combination of the words "Manas" "sarovara" manas meaning mind and sarovara meaning lake. According to the Hindu religion, the lake was first created in the mind of the Lord Brahma after which it manifested on Earth." 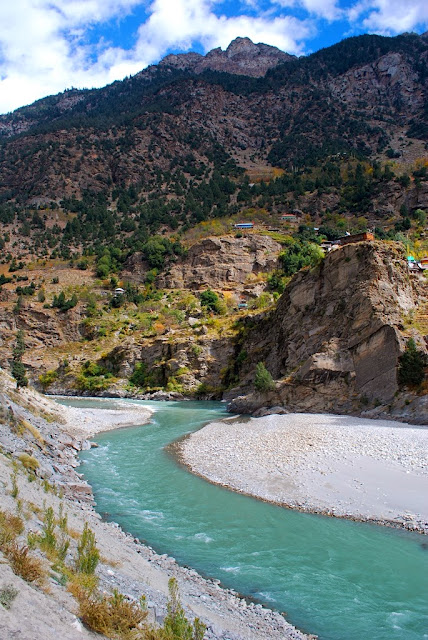 "The Sutlej, along with all of the Punjab rivers, is thought to have drained east into the Ganges prior to 5 mya.......There is substantial geologic evidence to indicate that prior to 1700 BC, and perhaps much earlier, the Sutlej was an important tributary of the Ghaggar-Hakra River (thought to be the legendary Sarasvati River) rather than the Indus, with various authors putting the redirection from 2500-2000 BC, from 5000-3000 BC, or before 8000 BC. Geologists believe that tectonic activity created elevation changes which redirected the flow of Sutlej from the southeast to the southwest. If the diversion of the river occurred recently (about 4000 years ago), it may have been responsible for the Ghaggar-Hakra (Saraswati) drying up, causing desertification of Cholistan and the eastern part of the modern state of Sindh, and the abandonment of Harappan settlements along the Ghaggar. However, the Sutlej may have already been captured by the Indus thousands of years earlier."..... K.S. Valdiya. 2013. "The River Saraswati was a Himalayan-born river". 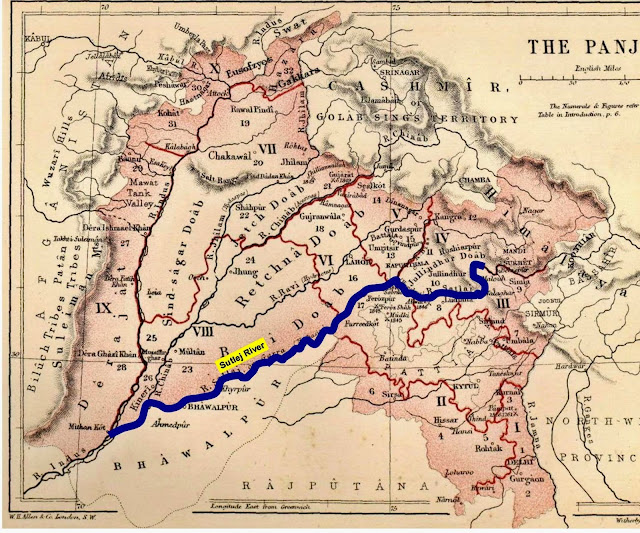 "Sutlej source...Gangdisê Mountains.....The Sutlej is sometimes known as the Red River. It is the easternmost tributary of the Indus River. Its source is Lake Rakshastal in Tibet.....Sutlej River, Ancient Greek Zaradros, Sanskrit Shutudri or Shatadru, longest of the five tributaries of the Indus River that give the Punjab (meaning “Five Rivers”) its name. It rises on the north slope of the Himalayas in Lake La’nga in southwestern Tibet, at an elevation above 15,000 feet (4,600 metres). Flowing northwestward and then west-southwestward through Himalayan gorges, it enters and crosses the Indian state of Himachal Pradesh before beginning its flow through the Punjab plain near Nangal, Punjab state. Continuing southwestward in a broad channel, it receives the Beas River and forms 65 miles (105 km) of the India-Pakistan border before entering Pakistan and flowing another 220 miles (350 km) to join the Chenab River west of Bahawalpur. The combined rivers then form the Panjnad, the link between the Five Rivers and the Indus."

"Lake Rakshastal (Rakshas Tal; Sanskrit: राक्षस ताल; Tibetan: ལག་ངར་མཚོ།, ZYPY: Lagngar Co; Wylie transliteration: lag-ngar mtsho; Chinese: 拉昂错, Pinyin: Lā'áng Cuò; La'nga Co) is a lake in Tibet, lying just west of Lake Manasarovar and south of Mount Kailash. The Sutlej River originates at Rakshastal's northwestern tip. Despite its close proximity to Lake Manasarovar (about 3.7 kilometres or 2.3 miles), Lake Rakshastal does not share the historic religious significance of its eastern neighbor.....The name of the lake literally means "lake of the demon" in Sanskrit. It is also known as Ravana Tal, as it is considered to be the place of severe penance by Ravana, the demon-like egoistic King of Lanka in Hindu theology .In Buddhism, Lake Manasarovar, which is round like the sun, and Rakshastal, shaped as a crescent, are respectively regarded as "brightness" and "darkness". Its salty water, in stark contrast to the fresh water of Lake Manasarovar, results in there being no aquatic plants or fish, and is considered poisonous by locals. It is a believe that the short river named Ganga Chhu which connecting Lake Manasarovar with Rakshastal is created by rishis to add pure water from Manasarovar.".... Taruna Vijaya (2001). Kailash Manasarovar, an odyssey in Tibet.

"The Satluj- is the principal river of Kinnaur almost dividing the district into two parts. It runs within the Himalayan mountains for about 450 kilometers and the first part of its course is west-north-west. When it enters Kinnaur, it generally takes south-westerly direction. Within the District the length is about 130 km. Its source is supposed to be at a great elevation on the southern face of the Kailash range whence it flows into the sacred lake Rawan Hard. As far as the village of Khab it is almost a razing torrent. At Khab it receives the Spiti river where the bed of stream is still above 2,589 m high from the mean sea level....The tributaries of the Satluj in this district are the Spiti, the Ropa, the Taiti, the Kashang, the Mulgoon, the Yula, the Wanger, the Shorang and the Rupi on the right bank and the Tirung, the Gyanthing, the Baspa, the Duling and the Solding running on the left bank." 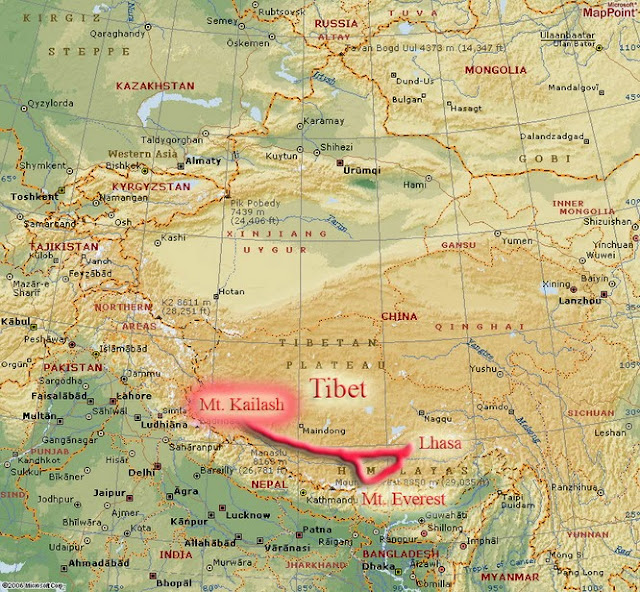 "Mount Kailash (also Mount Kailas); (Tibetan: གངས་རིན་པོ་ཆེ Kangrinboqê,Sanskrit: कैलास Kailash or Gang Rinpoche; simplified Chinese: 冈仁波齐峰, Gāngrénbōqí fēng) ....Kailas Range, Chinese (Pinyin) Gangdisi Shan or (Wade-Giles romanization) Kang-ti-ssu Shan, Tibetan Gang Tise, also called Gangdisê Range, ......is a peak in the Kailas Range (Gangdisê Mountains), which are part of the Transhimalaya in Tibet. It lies near the source of some of the longest rivers in Asia: the Indus River, the Sutlej River (a major tributary of the Indus River), the Brahmaputra River, and the Karnali River (a tributary of the River Ganga). It is considered a sacred place in four religions: Bön, Buddhism, Hinduism and Jainism. The mountain lies near Lake Manasarovar and Lake Rakshastal in Tibet."