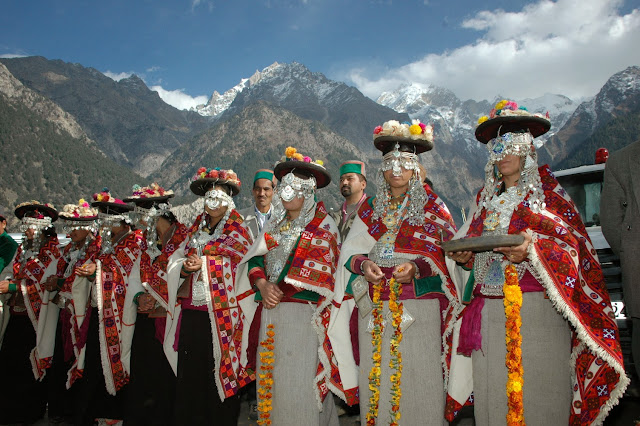 "Kinnaur The Land of Gods........Kinnaur surrounded by the Tibet to the east, in the northeast corner of Himachal Pradesh, about 235 kms from Shimla is a tremendously beautiful district having the three high mountains ranges i.e. Zanskar, Greater Himalayas and Dhauladhar, enclosing valleys of Sutlej, Spiti, Baspa and their tributaries. All the valleys are strikingly beautiful. The slopes are covered with thick wood, orchards, fields and picturesque hamlets. The much religious Shivlinga lies at the peak of Kinner Kailash mountain. The beautiful district was opened for the outsiders in 1989. The old Hindustan-Tibet road passes through the Kinnaur valley along the bank of river Sutlej and finally enters Tibet at Shipki La Pass. And it is not only the scenic beauty which appeals to the young and old alike but also the life styles of the people, their culture, heritage, customs and traditions.......The much honest people which have strong culture and beliefs generally follow the Buddhism and Hinduism believe that the Pandavas came and resided in the land while in the exile. In the ancient mythology the people of Kinnaur are known as Kinners, the halfway between men and gods. Thousands years old monasteries still exist in the area. Both the Buddhists and Hindus live in perfect harmony symbolising the traditional brotherhood and friendship of the people of both the faiths.".....The Official Website of Kinnaur, Himachal Pradesh

"Kinnaur is one of twelve administrative districts in the Indian state of Himachal Pradesh, India. The district is divided into three administrative areas – Pooh, Kalpa, and Nichar ..... The administrative headquarters of Kinnaur district is at Reckong Peo. From here Kinnaur Kailash, considered to be the abode of Lord Shiva, can be viewed.... there are nine vital languages are spoken in the district." 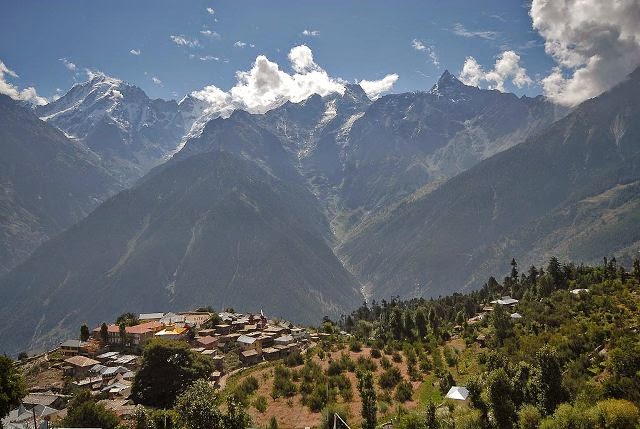 "Kalpa is a small town in the Sutlej river valley, above Recong Peo in the Kinnaur district of Himachal Pradesh, Northern India, in the Indian Himalaya. Inhabited by Kinnauri people and famous for its apple orchards. Apples are a major cash-crop for the region. The local inhabitants follow a syncretism of Hinduism and Buddhism, and many temples in Kalpa are dedicated to both Hindu and Buddhist gods and goddesses.... It is located at the base of the Kinnaur Kailash snow-capped ranges...Kalpa is a town with a history of ancient temples. The Sutlej River below hurtles through deep gorges, the winding mountain road is bordered by chilgoza forests. The serenity of this sleepy hamlet was not often visited by foreigners until recently, but there are still relatively few visitors. .... Taking a salted tea called cha in the morning and evening is very popular among the Kannauras which is usually taken along with sattu made of parched barley flour. People are non-vegetarian, which means tamasic or in the mode of ignorance, and they relish goat and ram's meat. Taking of alcoholic drinks in their day to day life and also on the ceremonial or festive occasions is quite common among them. Alcohol is distilled at the household level. It is made out of fruits like grapes, apple, pear etc. grown locally and of barley...Hinduism is the main religions in the district followed by Tibetan Buddhism. These two religions have undergone religious mixing, along with some indigenous shamanistic practices.." 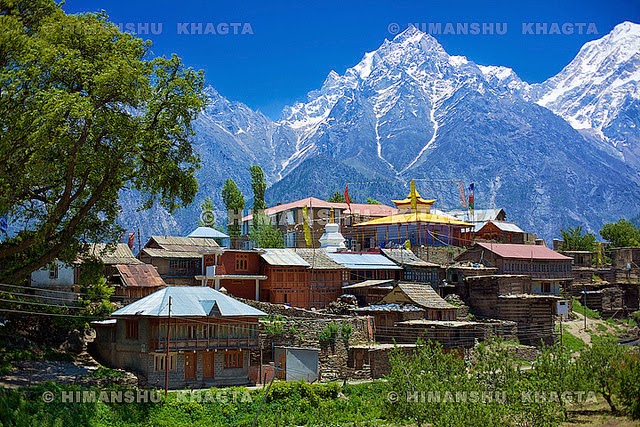 "Kinnaur - the land of fairy tales and fantasies, has a spectacular terrain of lush green valley, orchards, vineyards, snow clad peaks and cold desert mountains. It is a border district of Himachal Pradesh. Kinnaur is also rich in flora & fauna. The culture and language is different from other parts of the state. Kinnaur, the tribal district of Himachal Pradesh, lies 250 km away from Shimla, the capital of Himachal Pradesh and is situated on the NH - 22 (Hindustan Tibet Road). The landscape of the area varies from lush green orchards of the scenic Sangla Valley to the stark magnificence of the Hangrang Valley. The massive snow clad ranges that provide a regal dignity to the scene are dominated by the peak of Kinner Kailash. Kalpa is one of the biggest and beautiful villages of Kinnaur. One can enter Kinnaur district at Village Chshora and follow a straight line road constructed in vertical rock and it is a rare treat to travel on this road which is a great engineering feat......KALPA: Situated at the height of 2758 m above the sea level and 110 km from Sarahan, Kalpa is a beautiful and main village of Kinnaur. Across the river faces the majestic mountains of the Kinner Kailash range. These are spectacular sights early in the morning as the rising sun touches the snowy peaks with crimson and golden light.".....Himachal Tourism :: Kinnaur-Kalpa 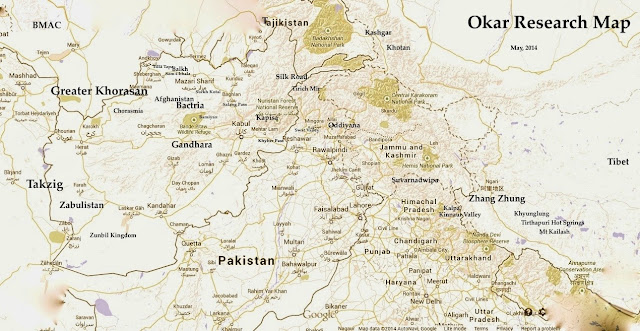 "Tirthapuri Hot Springs.........Located northwest of Mount Kailash in Western Tibet, the Tirthapuri Hot Springs are closely associated with Padmasambhava (Guru Rinpoche). Pilgrims bathe in pools fed by the springs, visit the monastery containing the guru's footprint and dig for healing stones along a one-hour pilgrimage route....Located on the north bank of the Sutlej River, the Tirthapuri Hot Springs fill the barren landscape with steam. Pilgrims typically come here after completing the Kailash pilgrimage. They bathe in pools fed by the sacred springs, then visit the cave and monastery associated with Guru Rinpoche....the Tirthapuri hot springs closely related with Guru Rinpoche. Lying on the bank of the Sutlej, the spring is only a few hours' drive northwest of Darchen. As a traditional place for pilgrims to bathe after their circuit Kailash, the spring is worshiped and treasured by the local people. However, as time goes by, the spring becomes weaker and weaker. Now it has already turned into a barren field. There is a one-hour kora route in Tirthapuri which is interesting to follow. .....If you are in a hurry, you can simply give the place a miss. If you go on from the hot spring, on the top you can see an oval of rocks of old clothes and rags--the cremation point."...... http://www.tibettravel.org/tibet-travel-advice/hot-springs-for-bathing-in-tibet.html

"Mount Kailash (also Mount Kailas); (Tibetan: གངས་རིན་པོ་ཆེ,Sanskrit: कैलास Kangrinboqê or Gang Rinpoche; simplified Chinese: 冈仁波齐峰, Gāngrénbōqí fēng) is a peak in the Kailas Range (Gangdisê Mountains), which are part of the Transhimalaya in Tibet. It lies near the source of some of the longest rivers in Asia: the Indus River, the Sutlej River (a major tributary of the Indus River), the Brahmaputra River, and the Karnali River (a tributary of the River Ganga). It is considered a sacred place in four religions: Bön, Buddhism, Hinduism and Jainism. The mountain lies near Lake Manasarovar and Lake Rakshastal in Tibet."

"Kyunglung (Tibetan: ཁྱུང་ལུང་དངུལ་མཁར།, ZYPY: Kyunglung Ngükar), the "Silver Palace of Garuda Valley", southwest of Mount Kailash (Gang Ti-se), which is identified with palaces found in the upper Sutlej Valley was the capital city of the ancient kingdom of Zhang Zhung. Many tibetologists and theorists suggest that Kyunglung was perhaps what the Zhang Zhung people called Tagzig Olmo Lung Ring (the Land of Happiness).......Khyunglung is an amazing complex of caves set in the hills on the north bank of the Sutlej River about 30 km west of the hotsprings and gompa of Tirthapuri and the nearby coal mining town of Moincer/Montser in the modern Chinese prefecture of Ali/Ngari in the Tibet Autonomous region (see Gyurme Dorje, Tibet 3rd ed.). There are further ancient ruins on the hilltops above the Bon monastery of Gurugem/Gurugyam which are only 6 km from Tirthapuri. There is very little published about these sites and virtually no archaeological investigations have been carried out......It has been suggested that Kyunglung was never a city as such, but more of a "convention centre for Bonpo magicians" and that the caves were used for ceremonial purposes during times when the clans gathered."....Buckley, Michael. (2003) Tibet 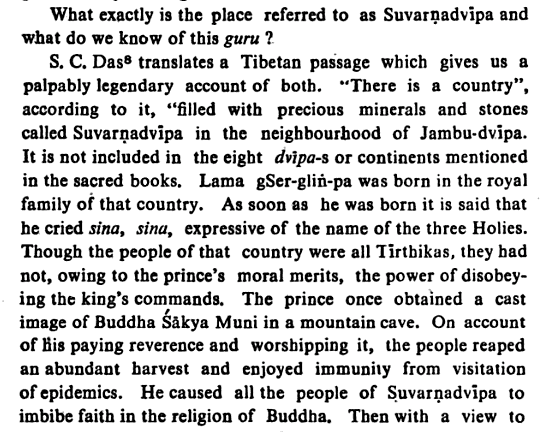