Mipham the Great wrote 'Beacon of Certainty', a compelling defense of Dzogchen that employs the very logic it was criticized as lacking. 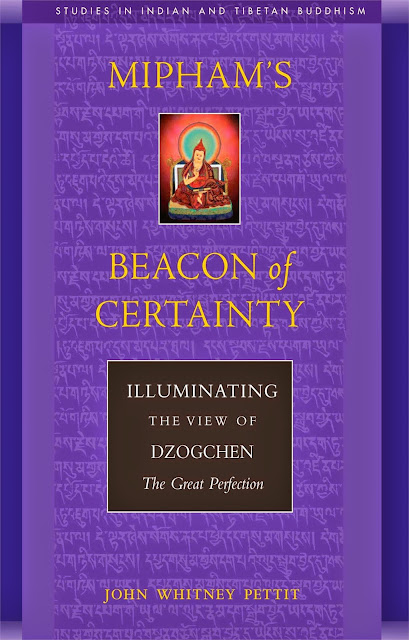 "Commentary composed by the 19th century scholar Jamgön Ju Mipham, or Mipham Jamyang Namgyal Gyamtso (1846–1912) (also known as "Mipham the Great")...... a master of the Nyingma lineage of Tibetan Buddhism and one of the leading figures in the Ri-me (non-sectarian) movement in Tibet.

"Mipham the Great was born to an aristocratic family in 1846 in the Derge Principality of Kham or Eastern Tibet. He was recognized as an exceptional child from a young age, memorizing texts as early as age six. By the age of ten he had already composed many texts. At twelve, he entered the monastery as an ordinary monk of the Ogmin Urgyen Mindrolling lineage at a branch monastery of the great Nyingma seat Shechen.
Mipham showed particular interest in the Kalachakra and the kingdom of Shambhala, and one of his last and most extensive of his esoteric works are his two volumes of commentary, initiation and sadhana related to the Kalachakra Tantra, the esoteric teaching from Shambhala. Before he died in 1912, he said to his students that now he was going to Shambhala.
Before he died, Mipham told his attendant ..... "Nowadays, if you speak the truth, there is nobody to listen; if you speak lies everyone thinks it is true. I have never said this before: I am not an ordinary person; I am a bodhisattva who has taken rebirth through aspiration. The suffering experienced in this body is just the residue of karma; but from now on I will never again have to experience karmic obscuration. … Now, in this final age, the barbarians beyond the frontier are close to undermining the teaching. So there is no point whatsoever in my taking rebirth here…I have no reason to take birth in impure realms ever again."

"The Beacon of Certainty is structured around seven questions including such practical issues of everyday practice as "Should one meditate analytically or in resting meditation?" Because of its thoroughness in addressing the foundations of the Nyingma-pa tradition, from Madhyamika philosophy to the view of Dzogchen, it is a key text studied in virtually all Nyingma-pa shedras. The title, "The Beacon of Certainty", refers to the fact that unwavering certainty in the view of the indivisible union of appearance and emptiness is a shining beacon that illuminates the spiritual path.

"While giving insight into the key points of view and meditation on the level of madhyamaka and tantra, the main purpose of this text is to elucidate the teachings of Dzogchen.

Khenpo Kunpal's commentary reads:
This Precious Beacon of Certainty is like an eye that brings all the difficult points of sutra and tantra into focus. Externally, it accords with Prasangika; internally, it accords with the Sutra that Gathers all Intentions and the Guhyagarbha Tantra; secretly, it accords with the Great Perfection.
Khenpo Jamyang Drubpé Lodrö writes ..... This sacred work, The Precious Beacon of Certainty, sheds its light of definitive understanding on important points from our own and other tenet systems.
It is a dragon’s roar to wake us from the sleep of foolish meditation,
And a sword to cut through error and wrong view.
With crucial points drawn from sutras and tantras of definitive meaning,
Showing the progressive stages on the Great Vehicle’s general path of sutra and mantra,
For the Ancient Translation School, the unique tradition of the Lake-born Buddha.

The text is structured as answers to the following seven questions:
1. According to which of the two negations do you explain the view?
2. Do arhats realize both types of selflessness?
3. Does meditation involve grasping at an object?
4. Should we do analytical meditation or settling meditation?
5. Which of the two truths is most important?
6. What is the common object of disparate perceptions?
7. Does Madhyamaka have a position or not?

Question #7......“Does Madhyamaka have a position or not?” is not only stated in the Adornment of the Middle Way, but is also a very crucial point in the Beacon of Certainty. Why is it emphasized again and again? Because during the time these treatises were composed, the Madhyamaka philosophy was flourishing dramatically. At that time, many learned masters from the Gelug, Nyingma, and Sakya held different views on this and it sparked some debate. For this reason, Mipham Rinpoche repeatedly analyzed and discussed this issue in various discourses........In fact, “Does Madhyamaka have a position or not?” refers to whether Madhyamaka takes any position at the ultimate level of truth. Nagarjuna previously said: “Since I take no position, I have no flaw at all.”...... Since the fundamental nature of reality is always beyond any conceptual extremes from the beginning, there is no fault in not holding any position......For those who have some understanding of Vajrayana practice, with the help of the pith instructions, it is possible that you might understand the nature of the mind when you carry out some observations. During the observations, if you say that your mind exists inherently, this cannot be established, but if you say that it doesn’t exist, that is also not true, because something clear and luminous is there. This state cannot be expressed in language and thought. This is the ultimate reality of things and events that we call tathagatagarbha, the true nature of Buddha........Therefore, in many of Mipham Rinpoche’s commentaries and works, this issue is very crucial. In what situation does the Madhyamaka accept the notion of existence? In what situation do they reject the notion of existence? These issues have been the subject of acute debate between the Prasangika and Svatantrika. By understanding these arguments, it can gradually help us to realize the nature of the mind, which cannot be found. But this “cannot be found” is not mere emptiness; this is a very subtle and profound state. It is beyond dualistic thoughts. If, however, the ultimate nature of reality were within the ordinary dualistic mind, then it would mean that ordinary beings have also realized this state, and there would be no difference between them and the great masters or enlightened beings. This is obviously absurd.".....Khenpo Sodargye Rinpoche..... Question and Answer Session at the Department of Philosophy of Peking University (2010) 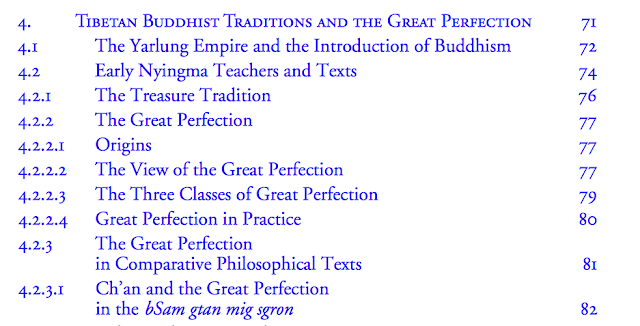 In the following quotation of Pettit (1999: p. 80), 'mantric syllables' are bija, and the 'buddha paradises' are Pure land:
"In the four visions of all-surpassing realization gnosis manifests spontaneously as visions of spheres of light containing mantric syllables and images of buddhas, "vajra chains" (rdo rje lug gu rgyud), and buddha paradises (zhing khams). After these visions reach the limit of diversity and completeness, all appearances recede in the ground of reality (dharmatã, chos nyid), and the perfection of the three buddha bodies is attained [trikaya]."

"For centuries, Dzogchen — a special meditative practice to achieve spontaneous enlightenment — has been misinterpreted by both critics and meditators as being purely mystical and anti-rational. In the grand spirit of Buddhist debate, 19th century Buddhist philosopher Mipham wrote Beacon of Certainty, a compelling defense of Dzogchen that employs the very logic it was criticized as lacking. Through lucid and accessible textural translation and penetrating analysis, Pettit presents Mipham as one of Tibet's greatest thinkers... 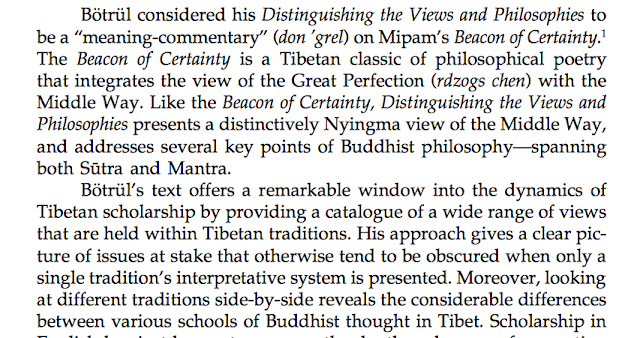 Anyen Rinpoche, Journey to Certainty: The Quintessence of the Dzogchen View: An Exploration of Ju Mipham's Beacon of Certainty, Boston: Wisdom Publications, 2012...