"Mt Kailas is the home of the Bon Goddess Sipai men, Sky Goddess...... The Tibetan shamanists call the mountain ‘Tise’ and believe it is the seat of the sky-goddess Sipaimen.

"Sidpa Gyalmo, or the Queen of Existence, may be the pre-Zoroastrian Iranian goddess of the waters Ardvi Sura Anahita, and in such case of later vintage, probably received in around the second century BCE." 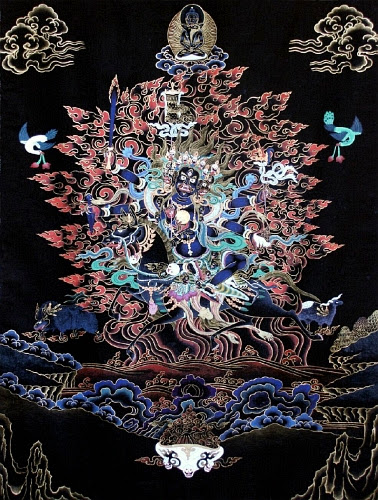 "Sipai Gyalmo has a complex iconography, and pantheon of manifestations, but is usefully summarized as a deep azure blue, wrathful deity who is pre-Buddhist in origin, and is a direct emanation of Shes-rab byams-ma, the Great Goddess."

"Sipai Gyalmo (Queen of the World) is the principal protector of the Bon Religion. She is the wrathful form of Sherab Chamma. As Sipai Gyalmo she functions both as a meditational deity and a protector. ....Sipe Gyalmo is one of the most frequently propitiated figures in the Bön religion, and extends Her protection to both religious practitioners and common people. Though horrific and wrathful in form She embodies the qualities of wisdom and compassion......Epithets for Her include Queen of the World, Queen of Existence, and Queen of the Universe, and Her name is also seen as Sidpa Gyalmo, Sipai Gyalmo, or Srid-pa’i Gyal-mo.”

Sipai Gyalmo ......Tibetan: Machog Sipai Gyalmo (ma mchog srid pa rgyal mo).......Sipai Gyalmo (Queen of the World) is both a meditational deity and a protector. She has six principal manifestations (white, yellow, red, black, blue and dark brown) and twenty-eight retinue attendant figures.......In the Bon religion the Queen of the World is the most wrathful manifestation of the peaceful deity Loving Mother of Wisdom (T. Sherab Chamma). Fierce in appearance, black in color, she has three faces and six arms holding weapons and implements of power and control. The three right hands hold a victory banner, flaming sword and a peg. The left hands hold a trident, svastika wand, and a skullcup filled with blood. Each of these symbolically represents cutting the knots of illusion and rooting out the three poisons of greed, anger and delusion. Riding on a red mule, she sits atop a flayed human skin symbolizing impermanence while the brightly burning flames of wisdom fire surround her...... She is one of the most frequently propitiated figures in the Bon religion, and extends her protection to both religious practitioners and common people. Though horrific and wrathful in form she embodies the qualities of wisdom and compassion."

" in the language of Shang Shung: Shang shung sipai gyalpo, that is, the All-Conquering Universal King."

"In the Bön religion, Sipe Gyalmo, the Queen of the World, is the most wrathful manifestation of the peaceful Goddess, Sherab Chamma - Loving Mother of Wisdom, who is the principal meditational form of Satrig Ersang of the Four Transcendent Lords. Sherab Chamma, also called in Tibetan language “Thugje Chamma”, (the loving mother of compassion) is considered in the Bön tradition to be the Gyalyum (rgyal yum), the Mother of all Buddhas. She embodies the perfection of wisdom. In the Buddhist tradition of India Chamma is called Prajnaparamita or Tara, the ‘saviouress.’” .... 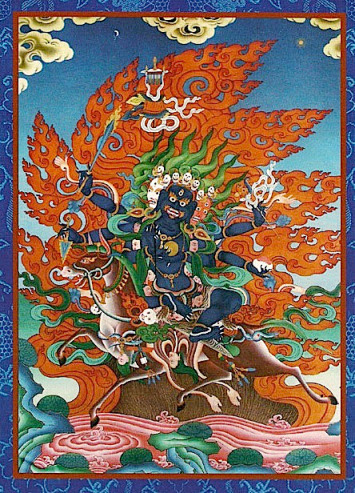 "Sidpai (also spelled Sipé) Gyalmo, Queen of Existence, is a yidam (meditation deity); a deity of exorcism and healing – using Her ferocious aspect to transmute all negative energies, thus assisting in the healing of all sentient beings; and a protector in the Bön tradition. “The Bön religion is an ancient, pre-Buddhist, shamanic belief system of Tibet that came under strong Buddhist influence from about the seventh century. Sidpa Gyalmo is a Bön guardian deity of the transmundane type (i.e. an emanation of the enlightened awareness and compassion of a great being, such as a Buddha). She has a complex iconography, and pantheon of manifestations, but is usefully summarized as a deep azure blue, wrathful deity who is pre-Buddhist in origin, and is a direct emanation of Shes-rab byams-ma, the Great Goddess. The latter is variously described as the Goddess of Wisdom and Love, or the Queen of the Waters. As a mythological study, Sidpa Gyalmo may represent a West to East transmission, along the Silk Route, of a most ancient Mesopotamian Goddess, possibly as old as 5,500 years, used by ashipus, or Mesopotamian medical exorcists. In this regard, She may well be Gula, the Mesopotamian Goddess of healing, known as the Great Physician, who flourished in the city of Isin. Equally, She may be the pre-Zoroastrian Iranian Goddess of the waters Ardvi Sura Anahita, and in such case of later vintage, probably received in around the second century BCE. In either event, Bön iconography depicts Her riding a mule, lending credence to the notion that She arrives in ancient Tibet from elsewhere.” .....http://tibetanaltar.blogspot.com/2010/11/poisons-and-pathogens-origins-of.html

"As a ritual issue, Sidpa Gyalmo’s practice is directed to healing infectious and contagious diseases. In the preliminaries, the practitioner commences with supplication to the deity, and then transforms into the deity. By means of divine fire, extraction of life force, dismemberment and consumption, the practitioner-deity eradicates the spirits of disease.
Next, a mantra is uttered numerous times, the deity is praised, and the origin of disease is considered. In general, disease is said to result as the consequence of fighting amongst corporeal beings. This, in turn, disgusts beneficent spirits, who desert them, and leads to attack by malicious spirits of water, wood, earth, and air, who plague them when the seasons change.
The causal considerations are pondered in detail, together with specific symptoms, and indications. For example: the practitioner listens to the sound of fresh spring water in his or her particular territory, and thereby discovers “the signs that originate prior” to the appearance of the infection. The practitioner also examines other signs in nature, such as the death of small mammals.
The body of the practice then commences with collection of pure water from an east-facing, valley spring in a clean earthen vase. One then bathes and makes earnest supplication to the Goddess, who is visualized as holding a vase containing medicine. She pours the medicine from her vase into the vase containing the spring water, after which the practitioner recites a mantra over the water, energizing it with sound.
The practitioner then effects a cure with this water by bathing the patient some six times during the day, all the while believing himself to be an emanation of the Goddess and uttering specific prayers. "

"In Sumerian mythology, Ninhursag (Ninḫursag) or Ninkharsag..... was a mother goddess of the mountains, and one of the seven great deities of Sumer. She is principally a fertility goddess. Temple hymn sources identify her as the 'true and great lady of heaven' (possibly in relation to her standing on the mountain) and kings of Sumer were 'nourished by Ninhursag's milk'. Her hair is sometimes depicted in an omega shape, and she at times wears a horned head-dress and tiered skirt, often with bow cases at her shoulders, and not infrequently carries a mace or baton surmounted by an omega motif or a derivation, sometimes accompanied by a lion cub on a leash. She is the tutelary deity to several Sumerian leaders.....Nin-hursag means "lady of the sacred mountain" (from Sumerian NIN "lady" and ḪAR.SAG "sacred mountain, foothill",possibly a reference to the site of her temple, the E-Kur (House of mountain deeps) at Eridu. She had many names including Ninmah ("Great Queen"); Nintu ("Lady of Birth"); Mamma or Mami (mother); Aruru, Belet-Ili (lady of the gods, Akkadian)".....Dalley, Stephanie (1998). Myths from Mesopotamia: Creation, the Flood, Gilgamesh, and Others. Oxford University Press. p. 326