Hinduism, Tibetan Buddhism and Bön: these three religions have undergone religious mixing, along with some indigenous shamanistic practices. One can see some the mixing of Buddhist and Hindu beliefs in varying degrees in Middle Kinnaur......The inhabitants of middle Kinnaur are Buddhist as well as Hindu. The important Hindu deities of middle Kinnaur include Chandi, Gauri Shankar, Kansa and Narayanjee....... Dabla, the local god of Kanam village, has certain features traditionally associated with the Bon religion. The image of Dabla is installed along with those of Buddha and Guru Rinpoche (Padmasambhava) in one of the monasteries at Kanam..............http://en.wikipedia.org/wiki/Kinnaur_district 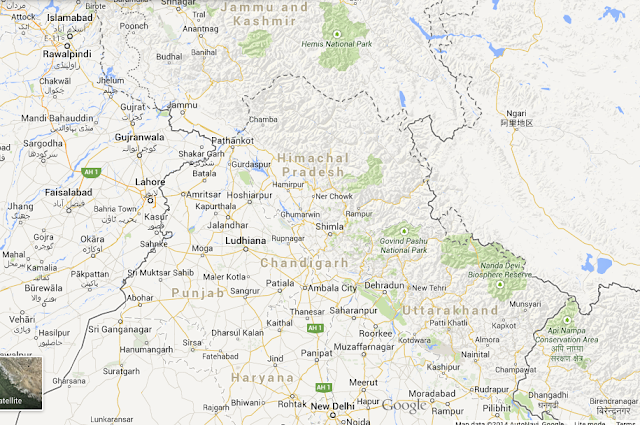 Buildings in Kalpa show strong Hindu and Buddhist influence. "...Middle Kinnaur is the area between Kalpa and Kanam including Moorang tehsil. The people of middle Kinnaur are of mixed racial strain. Some have marked Mongoloid and others marked Mediterranean features. In some cases there is an admixture of the above two in varying degrees. The inhabitants are Buddhist as well as Hindus. Many people have faith in both the religions. It is very common to see Buddhist flag in most houses." 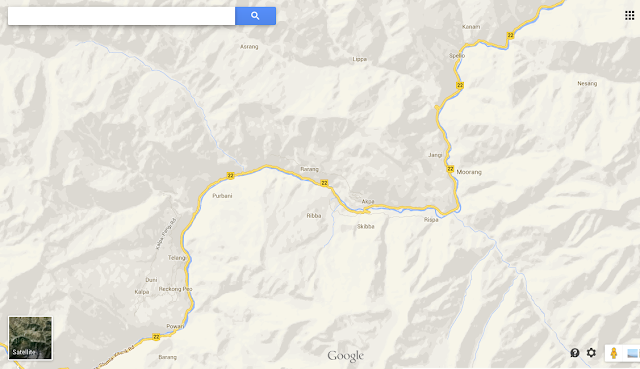 "One can see Hindu gods being worshipped side by side with Buddhist deities in Buddhist and Hindu temples, especially in Middle Kinnaur. Dabla, one of the major Bön deities, is greatly revered by the Kinners in the area. Folk Hindu gods are also worshipped in Middle and Lower Kinnaur. These include the Durga (locally known as Chandi, Narayan, Vishnu) and many other folk Hindu–animist gods. Folk deities play a major role in the daily life of the Kinners......Superstitions concerning animist ghosts such as Banchir, Rakshas, and Khunkch also play an important role in the belief system of the Kinners. Pujas and horns of domestic animals are used to ward off the evil spirits, in order to bring good luck."

"Buddhist lamas play an important role in the daily life of the Kinners, and young monks of Upper and Middle Kinnaur are trained from a young age in conducting religious ceremonies, devoting their lives to Lamaism and learning to read Tibetan scriptures and Buddhist doctrines. When they become Lamas (male monks) and Chomos (female nuns), they are given religious duties, which include presiding over the religious and secular affairs of the Kinners. They are generally divided into two groups, namely, the celibate Gyolang, who shave their heads, and the non-celibate Durpu, who do not shave their heads." 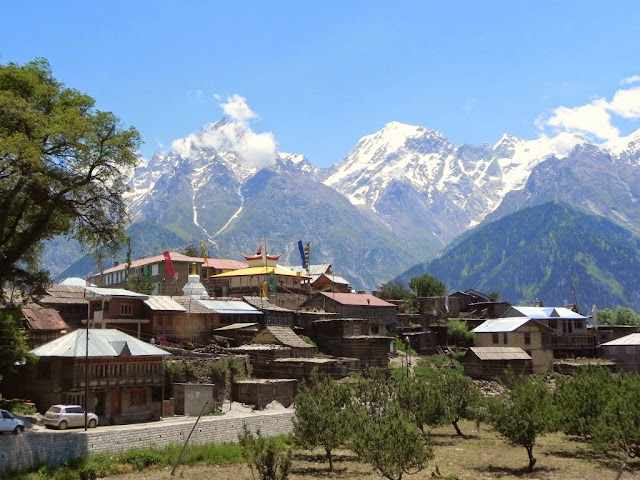 "Kalpa.........The Kinnaur Kailash is the most sacred mountain for most Kinners. Every year it is visited by thousands of locals on religious pilgrimages known as Yatra, Hindu and Buddhist alike."

"The Kinners speak a dialect of the Tibeto-Burman family known as Kinnauri or Kanauri. The distinctive feature of Kinnarui dialect is the use of Hindi elements. The Tibetan Jangram dialect is spoken by the Kinners living in Pooh and Sangla. Two thousand speakers of the old Zhang Zhung dialect in the Sutlej valley still remain today."

"Another theory is that Kinnars are not the Indo Aryans but the extension of Darads who were spread on the high mountains of western Himalayas, who belong to the Iranian stock. Darads speak a language which is related to Persian language. Speculation is that in ancient times the Kinnars may have spoken a language close to the language of the Darads. later when Tibet annexed the Himalayan region and captured the areas of Kinnour, Spiti and Ladakh, they may have had to adopt the language of the new rulers and abandon the their old language...." 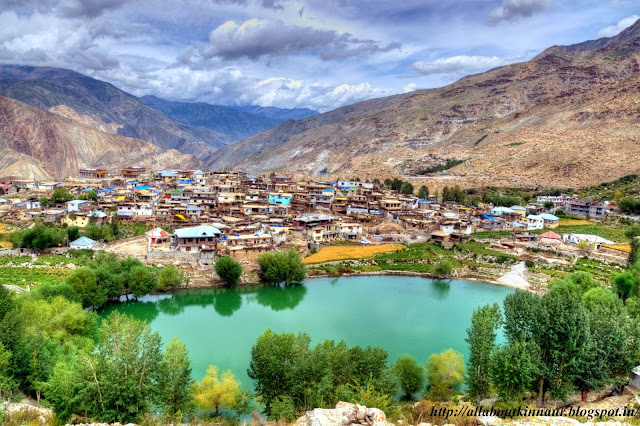 Nako Lake, Kinnaur....."Near this place there is a footlike impression ascribed to the saint Padmasambhava. Several miles away there is a village called Tashigang around which there are several caves where it is believed that Guru Padmasambhava meditated and gave discourse to followers. There is a waterfall nearby which has snow water falling like a river of milk. Legend says that it is a heavenly realm of fairies. In one of the caves you are still able to see the live footprints of these fairies or other demigods. It is a sacred place for the people of these valleys."

"Culture of Kinnaur is Tribal and fraternal polyandry is still present. This practice of polyandry was introduced in old times to balance survival as cultivated land is less and family planning was unheard....Polyandry (Ancient Greek: polys—many, anēr—man) is a form of polygamy whereby a woman takes two or more husbands at the same time."

"Kanam (Kanum) a beautiful village in Kinnaur District of Himachal Pradesh. Kanam comes under pooh tehsil and village is divided into two parts- upper & lower Kanam.
Kanam. (On a side road from Spillo. 40 km from Powari, 2699m). This is a complete monastic village and its Buddhist monastery is of considerable significance and dates back to time of Rinchensang-po. This is located at the base of the Nessang valley and is on one of the old trade routes that led to Tibet. It is 47 km from Recong Peo. In Kanam (Kinnaur) monastery there are 7 big and small monasteries built by Rin-Chan-Sang-Po. The principle one is situated at the top of the village. There are about 25 rooms in the monastery. They contain copies of Kanjur and Tanjur, the great encyclopaedia of Lamaism. The image of Buddha in the shrine is of gilt Bronze with blue hair.
KANAM is known as the land of god. This village is famous for its own beauty, land of sangyas( kanguer & tanguer) , local deity DABLA-SHU (jo- chhenboji) . For its cultural & religious prosperity kanam is also known as land of god. To visit this village till Spillow we need to follow NH22. There is separate route from spillow to Kanam nearly 4-5 km from Spillow. The bus service is limited, one in the morning & one in the evening. The private vehicles are available from spillow. In view of education, there are two primary schools here. The agriculture & farming is the main source of income here."....https://www.facebook.com/pages/LAND-of-GOD-KANAM/512715468751978?sk=info

Rinchan Sangpo ... In Kanam (Kinnaur) monastery there are 7 big and small monasteries built by Rin-Chan-Sang-Po.....

Tabo Gompa in lower Spiti (North of Kinnaur)....At the core of the complex is the Temple of Enlightened Gods (Tsug Lha-khang).....Below this are two images of the great translator and teacher Rin-Chan-Sang-Po, who is believed to have founded Tabo in A.D. 996.

Kalpa : ( 2,670 metres ) It is one of the main villages of the district connected by link road 14 km. from Powari beyond Rekong Peo. Looming in front of Kalpa is an imressive view of 'Kinner Kailash' directly across the Satluj river. This mountain changes colors several times a day with a change of weather conditions or may be as destined by Lord Shiva his eternal abode. 'Parvati Kund' is located on the top of Kinner Kailash. The ancient villages of Pangi, Moorang and Kanum are situated close to Kalpa. 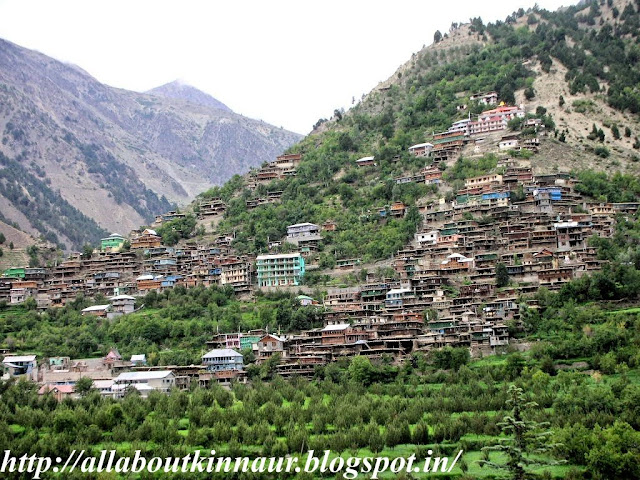 Morang : ( 2,591 metres ) This village is situated 39 kms. away from Kalpa on the left bank of river Satluj. The location is very beautiful and approach to this picturesque village is through apricot orchards. The local deity is Urmig and there are three structures dedicated to the deity each existing in Thwaring, Garmang and Shilling. Generally these are empty as the ark of the deity remains in the fort. On a sacred day the ark is taken to the above named places. The ark has got 18 'mukh', made of silver, gold and brass. The 18 mukh represents the 18 days of the great epic Mahabharat.