"....traditional Tibetan divisions of the Plateau: U-Tsang, Kham, and Amdo. U-Tsang is then divided into U, Tsang, Ngari, Lhokha, and Nakchuka / Changtang, with smaller regions within each. The divisions of Kham and Amdo are by historic kingdoms and monastic estates."

"Ngari prefecture (also known as Ali prefecture 阿里地区 Ālǐ Dìqū) is in the far west of Tibet, it's an extremely remote area with nearly no infrastructure of any type. Nicknamed the "Top of the Roof of the World"........Ali - AKA Sengge Khambab, The prefecture capital, a small town of no interest for the tourist, other than to stock up on supplies and have a hot shower.......Mount Kailash - The reason most people make the long journey out to this part of Tibet, the most holy mountain for the Tibetans.......Lake Manasarovar - is famous as one of the three most sacred lakes in Tibet (the other two are Namtso and Yamdrok lakes)......The Ruins of Guge Kingdom, 20 km west to the town of Zanda."......Wikitravel

"Atisha Dīpaṃkara b.982? - d.1054......Atisha Dīpaṃkara was of pivotal importance in the second transmission of Buddhism in Tibet. Invited from the Indian monastery-university of Vikramaśila to Tibet by the Purang kings, Atisha spent thirteen years in Ngari and U-Tsang. He is credited with the propagation of the Lamrim and Lojong teachings that later became the core of the Geluk tradition; his composition, the Bodhipathapradīpa is a central text for the Lamrim, or Stages of the Path. He was also instrumental in the spread of the cult of Tārā in Tibet.".....Treasury of Lives

"Mount Kailash (also Mount Kailas); (Tibetan: གངས་རིན་པོ་ཆེ Kangrinboqê,Sanskrit: कैलास Kailash or Gang Rinpoche; simplified Chinese: 冈仁波齐峰, Gāngrénbōqí fēng) is a peak in the Kailas Range (Gangdisê Mountains), which are part of the Transhimalaya in Tibet. It lies near the source of some of the longest rivers in Asia: the Indus River, the Sutlej River (a major tributary of the Indus River), the Brahmaputra River, and the Karnali River (a tributary of the River Ganga). It is considered a sacred place in four religions: Bön, Buddhism, Hinduism and Jainism. The mountain lies near Lake Manasarovar and Lake Rakshastal in Tibet."

"Khyungsprul Rinpoche (Khyung sprul rin po che) (1897-1955), was the instigator of the return of Bon po traditions to the ancient land of Zhang zhung in mNga' ris. Very significantly, he showed a particular interest for the remote Kinnaur valley." ....Josep Lluís Alay .......University of Barcelona

"Khyungsprul Rinpoche.... his biography also provides a unique, and therefore highly valuable, source of information regarding the traditional toponymy and onomastics of remote and isolated regions including Hor, Kinnaur and mNga’ ris (Ngari Prefecture)....." 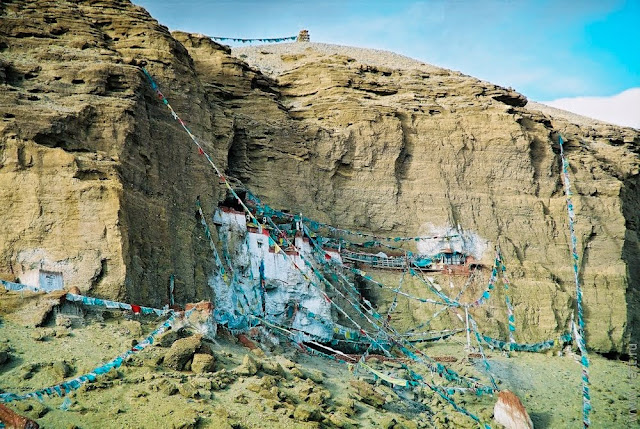 "Guge was an ancient kingdom in Western Tibet. The kingdom was centered in present-day Zanda County, within Ngari Prefecture of Tibet. At various points in history after 10th century AD, the kingdom held sway over a vast area including south-eastern Zanskar, Upper Kinnaur, and Spiti valley either by conquest or as tributaries. The ruins of the former capital of Guge kingdom are located at Tsaparang in the Sutlej valley, not far from Mount Kailash and 1,200 miles (1,900 km) westwards from Lhasa..... Srong nge or Ye shes 'Od (947–1024 or (959–1036), who was a renowned Buddhist figure. In his time a Tibetan from Guge called Rin chen Bzang po (958–1055), after having studied in India, returned to his homeland as a monk to promote Buddhism. Together with the zeal of Ye shes 'Od, this marked the beginning of a new diffusion of Buddhist teachings in western Tibet. In 988 Ye shes 'Od took religious vows and left kingship to his younger brother Khor re.......In 1037, Khor re's eldest grandson 'Od lde was killed in a conflict with the Muslim Qarakhanids from Central Asia, who subsequently ravaged Ngari. His brother Byang chub 'Od (984–1078), a Buddhist monk, took power as secular ruler. He was responsible for inviting Atisha to Tibet in 1040 and thus ushering in the so-called Phyi-dar phase of Buddhism in Tibet."...... Hoffman, Helmut, "Early and Medieval Tibet", Cambridge University Press, 1990 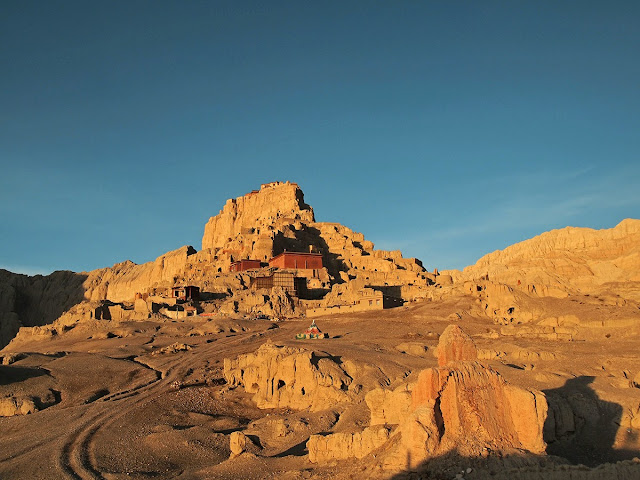 "Tsaparang was the capital of the ancient kingdom of Guge in the Garuda Valley, through which the upper Sutlej River flows, in Ngari Prefecture (Western Tibet) near the border of Ladakh. It is 278 km south-southwest of Senggezangbo Town and 26 km west of the 11th-century monastery at Thöling, and not far west of Mount Kailash and Lake Manasarovar. The Tsaparang Dzong was located here. Nearby is the Bon monastery of Gurugem.......Tsaparang is a huge fortress perched on a pyramid-shaped rock rising about 500 to 600 feet (152 to 183 m) at the end of a long narrow spur. It contains numerous tunnels and caves that have been carved out of the rock. At its base was a village where the common people lived. Above them were two public temples - the Lhakhang Marpo (Red Chapel) and the Lhakhang Karpo (White Chapel), and quarters for the monks. Further up, ascending a twisting stone staircase in a tunnel, were the royal quarters, and at the very top, the summer palace....Historian Michael Wood, in the "Shangri-La" episode of the BBC TV/PBS documentary series In Search of Myths and Heroes, suggested that Tsaparang was the historical origin of the legend of Shangri-La, and that its two great temples were once home to the kings of Guge in modern Tibet.....Guge controlled an ancient trading route between India and Tibet. It emerged in the region previously known as Zhangzhung and became an important regional power by the 10th century CE.......".... "Amdo & Hor.....In historical times, the people of the region were typically non-Tibetan, such as Mongol or Tibetan of foreign origin such as the Hor people......The Tibetan inhabitants of Amdo are referred to as Amdowa (Tibetan: ཨ་མདོ་པ།; amdo pa) as a regional distinction from the Tibetans of Kham (Khampa) and U-Tsang (Central Tibet), however, they are all considered ethnically Tibetan.....The language Hor, or Western Khams, is spoken in the Nagqu area.......,"King Ligmikya of Zhangzhung, while on his way to Sum-ba (Amdo province) was ambushed and killed by King Srongtsen Gampo's soldiers. As a consequence, the Zhangzhung kingdom was annexed to Bod [Central Tibet]. Thereafter the new kingdom born of the unification of Zhangzhung and Bod was known as Bod rGyal-khab." R. A. Stein places the conquest of Zhangzhung in 645."...... Norbu, Namkhai. (1981). The Necklace of Gzi, A Cultural History of Tibet,