Balkh is also known as the home of Rabia Balkhi...Rābi'a bint Ka'b al-Quzdārī (Persian: رابعه بنت کعب‎), popularly known as Rābi'a Balkhī (رابعه بلخی) and Zayn al-'Arab (زین العرب), is a semi-legendary figure of Persian literature and was possibly the first poetess in the history of New Persian poetry. References to her can be found in the poetry of Rūdakī and 'Attār. Her biography has been primarily recorded by Zāhir ud-Dīn 'Awfī and renarrated by Nūr ad-Dīn Djāmī. The exact dates of her birth and death are unknown, but it is reported that she was a native of Balkh in Khorāsān (now in Afghanistan). Some evidences indicate that she lived during the same period as Rūdakī, the court poet to the Samanid Emir Naṣr II (914-943). 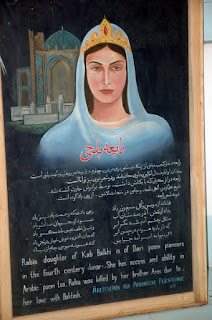 She was one of the first poets who wrote in modern Persian, and she is, along with Mahsatī Dabīra Ganja'ī, among a very few female writers of medieval Persia to be recorded in history by name. When her father died, his son Hāres, brother of Rābi'a, inherited his position. According to legend, Hāres had a Turkic slave named Baktāsh, with whom his sister was secretly in love. At a court party, Hāres heard Rābi'a's secret. She is slashed and left in a hamam, a steam bath, to bleed to death! Her last poem to Baktash is written in blood on the walls of the hamam.

Rābi'a bint Ka'b al-Quzdārī (Persian: رابعه بنت کعب‎‎), popularly known as Rābi'a Balkhī (رابعه بلخی) and Zayn al-'Arab (زین العرب), is a semi-legendary figure of Persian literature and was possibly the first woman poet in the history of New Persian poetry. References to her can be found in the poetry of Rūdakī and 'Attār. Her biography has been primarily recorded by Zāhir ud-Dīn 'Awfī and renarrated by Nūr ad-Dīn Djāmī. The exact dates of her birth and death are unknown, but it is reported that she was a native of Balkh in Khorāsān (Afghanistan). Some evidences indicate that she lived during the same period as Rūdakī, the court poet to the Samanid Emir Naṣr II (914-943).

Her name and biography appear in 'Awfī's lubābu 'l-albāb, 'Attār's maṭnawīyat, and Djāmī's nafahātu 'l-uns. She is said to have been descended from a royal family, her father Ka'b al-Quzdārī, a chieftain at the Samanid court, reportedly descended from Arab immigrants who had settled in eastern Persia during the time of Abu Muslim. 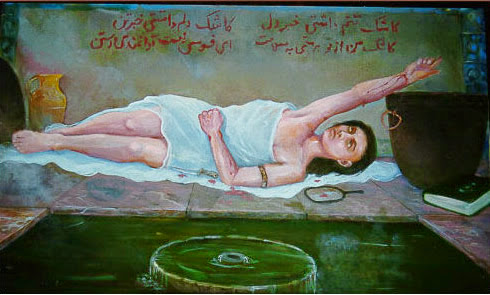 Rabia Balkhi or Rabia Qozdari is a famous princess who lived in the city of Balkh and at the court of samanids during the 9th century AD. Beside her physical beauty, she loved writing verses of poem. Her talent in poetry was concentrated on love and beauty. Her poems were not recited publicly during her life time.....Her tomb still exists in Balkh......For centuries young Uzbek girls and boys treated her tomb with saint-like devotion and would pray there for success in their love affairs. After the Taliban captured the region, they placed her tomb out of bounds...." 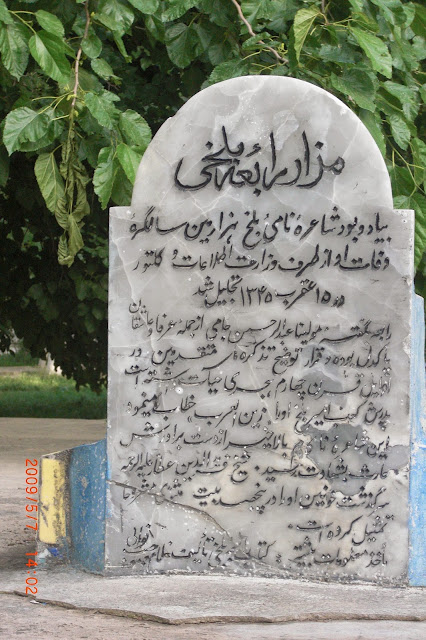 
I am caught in Love's web so deceitful
None of my endeavors turn fruitful.
I knew not when I rode the high-blooded stead
The harder I pulled its reins the less it would heed.
Love is an ocean with such a vast space
No wise man can swim it in any place.
A true lover should be faithful till the end
And face life's reprobated trend.
When you see things hideous, fancy them neat,
Eat poison, but taste sugar sweet."

"Among the film reels saved from the Taliban was the country's first feature film, Rabia Balkhi, which told the true story of the eponymous first and only queen of Afghanistan, who wrote Sufi poetry infused with erotic allegories, fell passionately in love with a court slave and was murdered by her jealous brother.....'Rabia Balkhi' became a sensation upon release in 1965 and was shown countless times in theatres and on television. But by 1996 it exemplified everything the Taliban feared and detested: a lavish historical epic with an enchanting queenly figure at its centre who could be seen, most dangerously, as the embodiment of the sexually liberated, politically emboldened woman. Fuelling the Taliban's ire, the role was played by the sultry Afghan actress Seema, clad in sumptuous, tightly tailored costumes, who was cast opposite Abdullah Shadaan, also the director of the film. The pair met and fell in love on set, marrying soon after. (They now work for the Pushto section of the BBC World Service in London).......During the Soviet occupation, the country's Mujahudeen disapproved of the film and by 1990 it had ceased to be shown. When the Taliban was defeated in 2001, a sense of unease about the queen's morality hung in the air. Even though the hidden reels were discovered in 2002, the film has still not been shown to the public in Afghanistan since then, perhaps because its combination of erotic poetry, romance and female leadership is likely to touch on the unresolved status of Afghan women today.....Now, two decades after it was last played before a cinema audience, the epic is to be shown tomorrow at the Tricycle Theatre in London as part of the Afghanistan Film Festival, an event that is little short of momentous for the wartorn country's film-makers. It is the first time the film is being shown in Britain, and the first time it has had subtitles attached.".......http://www.youtube.com/watch?v=MzEMEnYf14Y....http://www.independent.co.uk/news/world/middle-east/jewel-of-afghan-cinema-saved-from-the-taliban-1681824.html

Known for her beauty and for being the female pioneer in the New Persian Poetry, Rabia Balkhi was born in a royal family and was a native of Balkh in Khorasan (which is now in Afghanistan). Her father, Ka’b al-Quzdari, was a chieftain at the Samanid court.

"Greater Balkh was at that time a major center of a Persian culture and Khorasani Sufism had developed there for several centuries. Indeed, the most important influences upon Rumi, besides his father, are said to be the Persian poets Attar and Sanai.[ Rumi in one poem express his appreciation: "Attar was the spirit, Sanai his eyes twain, And in time thereafter, Came we in their train" and mentions in another poem: "Attar has traversed the seven cities of Love, We are still at the turn of one street". His father was also connected to the spiritual lineage of Najm al-Din Kubra.......