Qala, Kala, Qila (Persian: قلعہ; meaning fort or castle).....Kala pa: place of the castle.....As an alternate spelling of Qala, or "fortress" in Persian....Qila (Persian: قلعه‎), (Urdu: قلعه‎, Hindi: क़िला) or Qala is a Persian word meaning a fort or castle. Qala is used in names of places as a prefix in Iran, Turkey, Afghanistan, Azerbaijan, India, Pakistan and Palestine

"In the center of the ring of mountains lies the country’s capital, Kalapa by name. By night, the city of light is lit up as bright as day, so that the moon can no longer be seen. There the Shambhala king lives in a palace made from every conceivable gem and diamond. The architecture is based upon the laws of the heavens. There is a sun temple and a moon temple, a replica of the zodiac and the astral orbits. A little to the south of the palace the visitor finds a wonderful park. In it Suchandra ordered the temple of Kalachakra and Vishvamata to be built. It is made from five valuable materials: gold, silver, turquoise, coral, and pearl. Its ground plan corresponds to the Kalachakra sand mandala.".....http://www.trimondi.de/SDLE/Part-1-10.htm 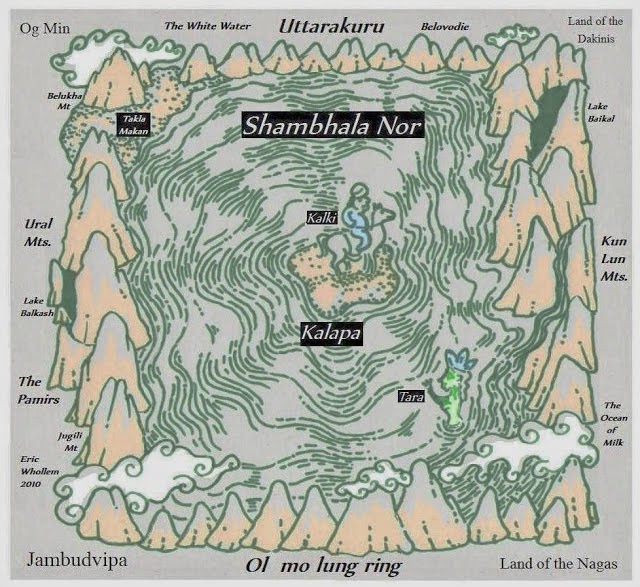 Art Blog/Eric Whollem.....A MAP TO SHAMBHALA/ The Way to Kalapa and the Lake of Shambhala Nor/ Shangri La and Shambhala/ Peach Blossom River/ Crossing the White Waters/ Mandala of the Four Rivers/ Altai Mysticism/ The Legend of Kalki/ Roseapple Island: a digression on Jambudvipa/ The Egyptian Tuat/ Tara Rising From the Waters/ The Nagas/ Pancha Raksha

"Like the Indian Maha Siddhas, the Kalkis have long hair which they tie up in a knot. Likewise, they also adorn themselves with earrings and armbands. “The Kalki has excellent ministers, generals, and a great many queens. He has a bodyguard, elephants and elephant trainers, horses, chariots, and palanquins. His own wealth and the wealth of his subjects, the power of his magic spells, the nagas, demons, and goblins that serve him, the wealth offered to him by the centaurs and the quality of his food are all such that even the lord of the gods cannot compete with him. ... The Kalki does not have more than one or two heirs, but he has many daughters who are given as vajra ladies during the initiations held on the full moon of Caitra each year” . It thus appears they serve as mudras in the Kalachakra rituals...( John Newman, 'Wheel of Time: The Kalachakra in Context', 1985, p. 57)

"The Rigden King is seated upon a golden throne, supported by eight sculptured lions. In his hands he holds a jewel which grants him every wish and a magic mirror, in which he can observe and control everything in his realm and on earth....Shambhala king lives in a palace made from every conceivable gem and diamond.... 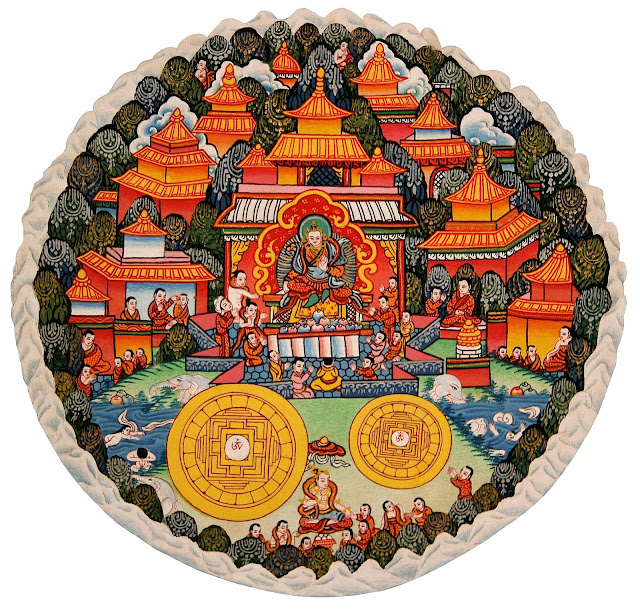 Kalapa, the capital, from a classical thangka of the Kingdom of Shambhala

"....of the women of Shambhala we hear only something of their role as queen mother, the bearer of the heir to the throne, and as “wisdom consorts”. In the “tantric economy” of the state budget they form a reservoir of vital resources, since they supply the “gynergy” (Female creative energy) which is transformed by the official sexual magic rites into political power. Alone the sovereign has a million girls, “young as the eight-day moon”, who are available to be his partners."....John Newman, 'Wheel of Time: The Kalachakra in Context', 1985

"The monks wear white, speak Sanskrit, and are all initiated into the mysteries of the Kalachakra Tantra. The majority of them are considered enlightened. Then come the warriors. The king is at the same time the supreme commander of a disciplined and extremely potent army with generals at its head, a powerful officer corps and obedient “lower ranks”.....The Shadow of the Dalai Lama....Victor & Victoria Trimondi

".....the protest of a group of no less than 35 million (!) Rishis (seers) led by the sage Suryaratha ("sun chariot”)..... [Surya (Devanagari: सूर्य Sūrya, "the Supreme Light") Suraya or Phra Athit is the chief solar deity in Hinduism. The term Surya also refers to the Sun, in general.]......As the first Kulika king, Manjushrikirti, preached the Kalachakra Tantra to his subjects, Suryaratha distanced himself from it, and his followers, the Rishis, joined him. They preferred to choose banishment from Shambhala than to follow the “diamond path” (Vajrayana). Nonetheless, after they had set out in the direction of India and had already crossed the border of the kingdom, Manjushrikirti sank in to a deep meditation, stunned the emigrants by magic and ordered demon birds to bring them back.....The Rishis worshipped only the sun. For this reason they also called their guru the “sun chariot” (suryaratha). But the Kulika king had as Kalachakra master and cosmic androgyne united both heavenly orbs in himself. He was the master of sun and moon. His demand of the Rishis that they adopt the teachings of the Kalachakra Tantra was also enacted on a night of the full moon....The Rishis decided upon the latter. “Since we all want to remain true to the sun chariot, we also do not wish to give up our religion and to join another”, they rejoined (Grünwedel, 1915, p. 77.....Albert Grünwedel (July 31, 1856 – October 28, 1935) was a German indologist, tibetologist, archaeologist, and explorer of Central Asia.).

This resulted in the exodus.... But in fetching them back Manjushrikirti demonstrated that the “path of the sun and moon” is stronger than the “pure sun way”. The Rishis thus brought him many gold tributes and submitted to his power and the primacy of the Kalachakra Tantra. In the fifteenth night of the moon enlightenment was bestowed upon them....They could fit harmoniously into a Shambhala society by joining in one vajra caste, without renouncing thier religion..... Manjushrikirti integrated in his office the energies of both the priestly and the military elite. Within himself he united worldly and spiritual power, which — as we have already discussed above — are allotted separately to the sun (high priest) and the moon (warrior king) in the Indian cultural sphere. The union of both heavenly orbs in his person made him an absolute ruler."....

"Manjushrikirti’s interest to abolish all caste distinctions in an overarching militarily oriented Buddhocracy. The historical Buddha is already supposed to have prophesied that the future Shambhala king, “.. possessing the Vajra family, will become Kalki by making the four castes into an single clan, within the Vajra family, not making them into a Brahman family” ( John Newman, 'Wheel of Time: The Kalachakra in Context', 1985, p. 64). 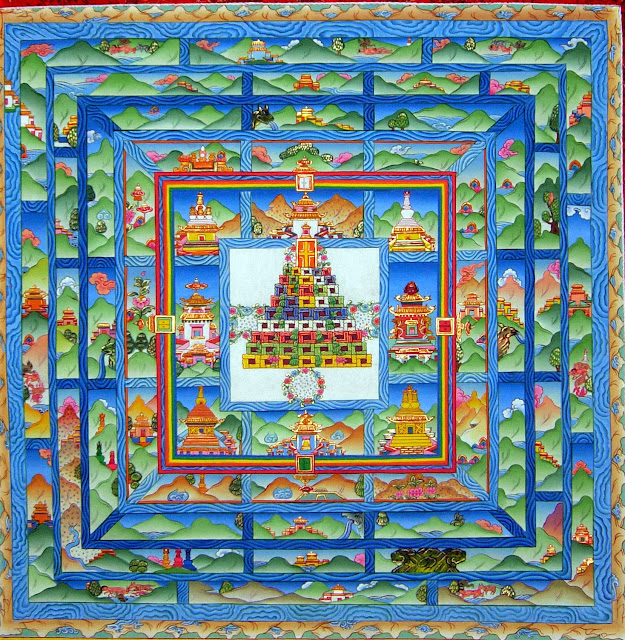 " Tönpa Shenrab, who was born in a completely pure and spiritual land named Tag-Zig Olmo Lung Ring [hereafter Olmo Lung Ring], which is beyond the impure nature of this existing world. The birthplace of all enlightened ones, it is a perfected realm where peace and true joy last forever and it is free from any danger of destruction by any of the elements of nature. The land of Olmo Lung Ring lies to the west of Mount Kailash.....Historical Bön texts state very clearly that the holy mountain Mount Kailash was in the center of the Kingdom of Zhang Zhung."...Opening the Door To Bön, Snow Lion Publications, 2005

Email ThisBlogThis!Share to TwitterShare to FacebookShare to Pinterest
Labels: GreatEasternSun